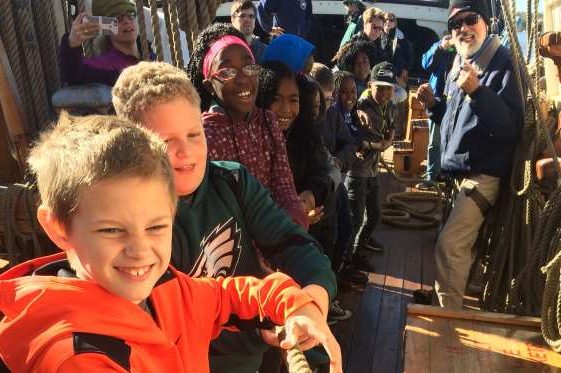 The Kalmar Nyckel, launched in September 1997, is a replica of the earliest Swedish ship to arrive in America. It was built at the Kalmar Nyckel Foundation’s shipyard on Wilmington’s historic 7th Street Peninsula, about 200 yards downstream from the site of the original ship’s first landing at “the Rocks” in March of 1638. The original Kalmar Nyckel served as Governor Peter Minuit’s flagship for the 1638 expedition that founded the colony of New Sweden, establishing the first permanent European settlement in the Delaware Valley, Fort Christina, in present-day Wilmington, Delaware. She would make a total of four roundtrip crossings of the Atlantic, more than any other documented ship of the American colonial era.

The new Kalmar Nyckel sails daily from April to November, voyaging over 3,000 nautical miles each year. She sails from her home port in Wilmington and her second port in Lewes, Delaware, and visits ports-of-call along the Eastern Seaboard from Virginia to New England. The ship is served by a crew of 300 active volunteers and USCG-certified officers. In addition to sailing, the volunteer crew maintains the ship each winter season and delivers much of the foundation’s educational program throughout the year.

The tall ship Kalmar Nyckel serves as a floating classroom and an inspirational platform for educational outreach. The program offers people of all ages a variety of sea- and land-based learning and recreational experiences. There are a variety of public sails and tours, scheduled events and festivals as well as educational programs which can be found on the website.