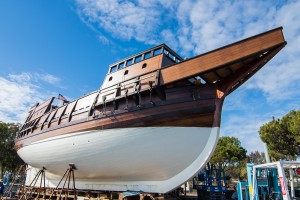 Update: Citing technical and logistical difficulties, the Maritime Museum of San Diego has cancelled the April 19th launch. A new launch date has not been announced.
The Maritime Museum of San Diego has announced an April 19 launch date for San Salvador. The ship is a historically accurate replica of the ship which explorer Juan Rodriguez Cabrillo sailed into what is now San Diego Bay on 28 September 1542, the first recorded European vessel to sail along Southern California, and survey its coastlines. The keel for the replica ship was laid in 2011; the museum has invited the public to observe its construction from the beginning, either in person at the site or via the museum’s website. 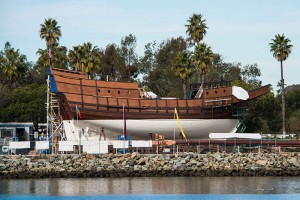 San Salvador will join the museum’s fleet of ships, including the sailing ships Star of India, Surprise, and Californian, as well as serving as a floating educational platform. For more information email the museum at info@sdmaritime.org. Photos courtesy Jerry Soto