Save the Date! Pickle Night 7 November 2014 at the New York Yacht Club

PICKLE NIGHT SAVE THE DATE!
Friday, 7 November 2014 at the New York Yacht Club 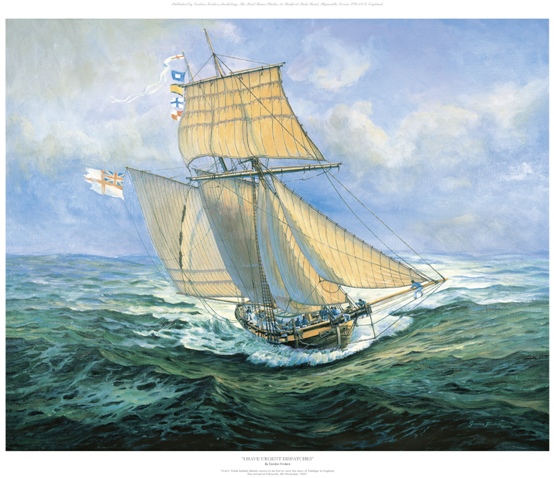 CREDIT: “I Have Urgent Dispatches” by Gordon Frickers

This year marks the 209th Anniversary of the Battle of Trafalgar, and the 11th New York City Pickle Night Dinner will mark this history changing event on 7 November 2014.  Those who appreciate the historical significance of Admiral Lord Horatio Nelson and the lore associated with his life are invited to attend this special event.  The Dinner is named for HMS Pickle, which participated in the Battle of Trafalgar in 1805 and which brought the news to Britain of Nelson’s victory and death in the battle. This event has been a perennial success, with guests from the United States, Canada, Great Britain, France, Switzerland, and elsewhere.

Vice Admiral David Steel CBE, Second Sea Lord will be the main speaker. Admiral Steel joined the Royal Navy in 1979 and he graduated in Law from Durham University in 1983. He served in minesweepers, frigates, destroyers, and the aircraft carrier HMS Invincible. Admiral Steel became Naval Base Commander Portsmouth in 2005. In that assignment, he also was aide to Her Majesty the Queen. He was appointed Chief Naval Logistics Officer in 2008, and in 2009 he was named Director, Pay and Manning in the Ministry of Defence. In 2010 he became ACNS (Pers)/Naval Secretary, and in 2012 Admiral Steel was named Second Sea Lord. He is an enthusiastic sports fan, a Freeman of the City of London and a member of the Windsor Leadership Trust.

Graham Dobbin, Deputy Director-General of the National Museum of the Royal Navy will be the initial speaker. Graham earned a BA in History (with honors) from the University of Wales. He joined the Royal Navy Submarine Museum in 1989. In 1993 he became Head of Resources for the Royal Naval Museum in Portsmouth. Graham’s duties also include support of the unique efforts to preserve HMS Victory.

Space is limited. For reservations contact us via email at NMHS@seahistory.org or call (914) 737-7878.  Ticket price is $285 per person. Dress is Black Tie or military equivalent.