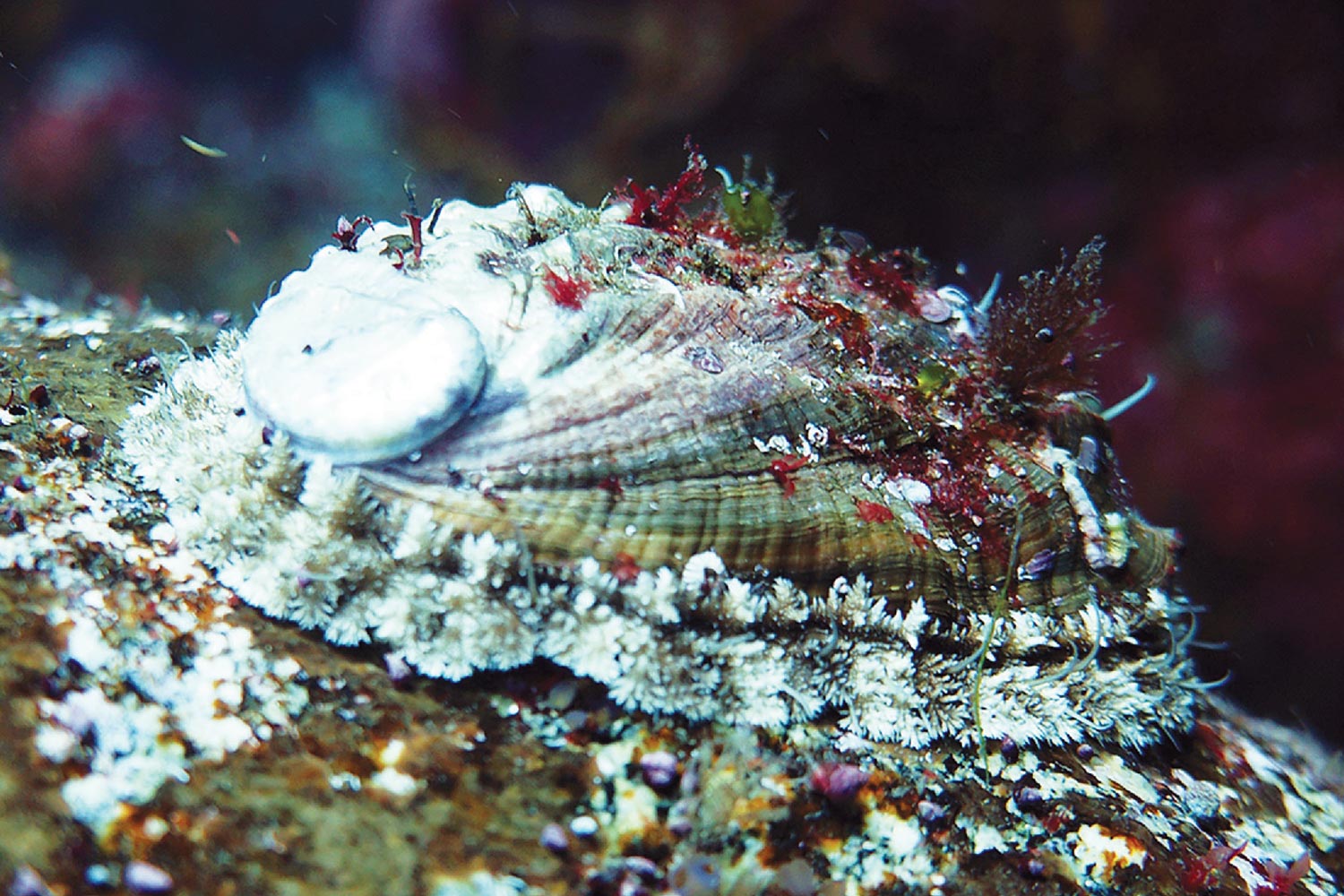 Scientific Name:
Haliotis discs hanna
The top of the shell often host for algae, barnacles, and other inverts. The underside of the shell has iridescent, pearly colors due to years of varied diet of colored algae.

For the haenyeo, the traditional female divers of Korea’s Jeju Island, the abalone is not only a prized source of food and security, but is also a source of fear. Their work collecting these marine snails can be as dangerous as the threat from sharks along their volcanic coastline. Over the last three centuries, hundreds of these women have died in their efforts to capture abalone when diving into the cold waters at their island intersection between the Korea Strait, the Yellow Sea, and the South China Sea. There’s a saying among these divers: “Haenyeo live with their coffins on their backs.” 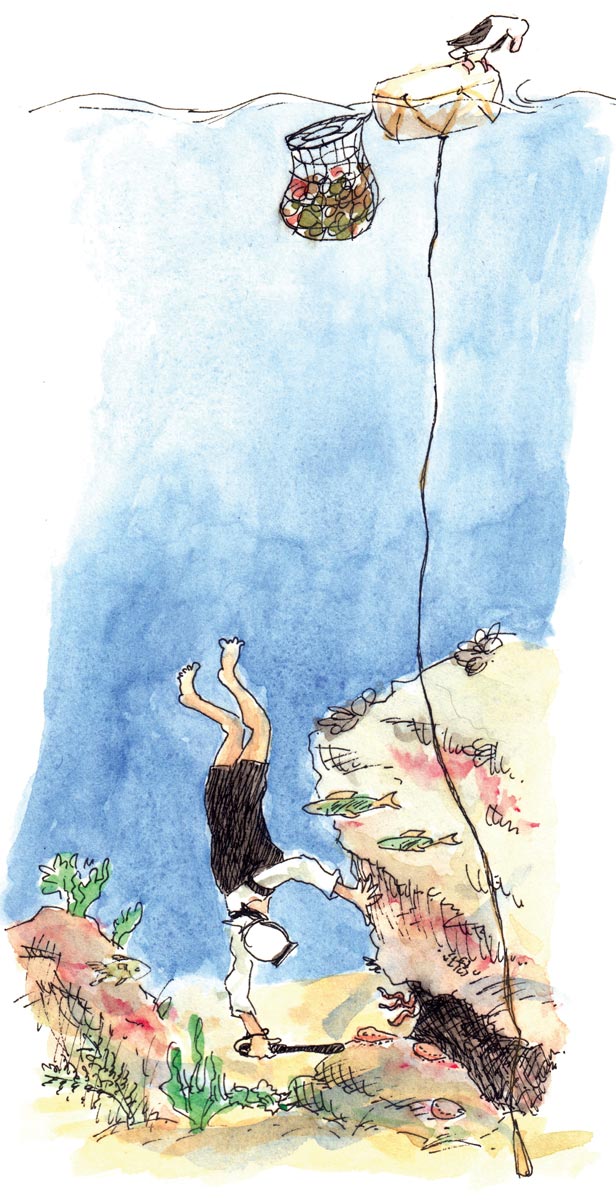 Among the fifty or so species of abalone worldwide, the most common two captured by the haenyeo off Jeju Island (pronounced Cheh-jew) are the Pacific abalone, jeonbok in Korean, and the multicolor, known as obunjagi. With a hard oval shell protecting its body, the abalone’s organs encircle a single muscle, known as the foot, evolved to hold on to its shell and a rock. Abalone are related to other single-shelled gastropods, like marine snails and limpets, but abalone are far larger and more powerful. Red abalone (Haliotis rufescens) found off the coast of California grow the largest, with some individuals over a foot across. The Pacific abalone that the haenyeo harvest grow as long as six inches across, and the multicolor abalone are much smaller, at about half that size.

With their fringe of tentacles and a rasping band of teeth around the mouth, abalone feed on algae and seaweeds below the tideline, often under ledges or on deep boulders. In order to hold on to their rocky substrates, which are often subject to strong currents and swells, and to protect themselves against predators, such as octopuses, eels, crabs, and sea otters, abalone can quickly shut tight and seemingly cement their shell over their bodies with great force and speed. This suction strength is what can kill a person trying to capture them. 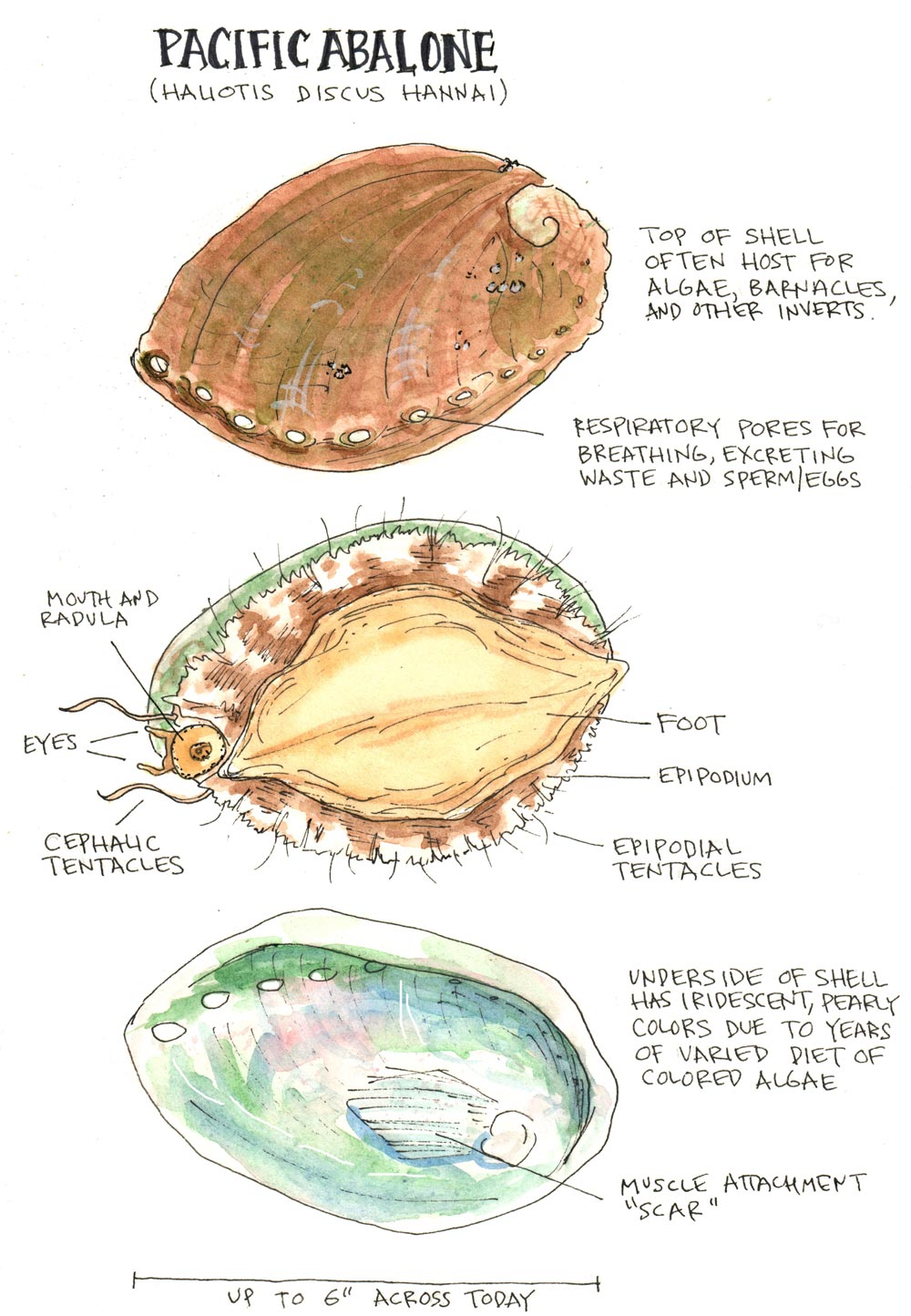 Nevertheless, because abalone is such a valuable food in cultures throughout the world, people continue to try. The first documented fisheries for abalone were 1,500 years ago in China and Japan, yet Indigenous peoples around the world have been harvesting them for millennia.

On Jeju, archaeologists have found abalone in shell middens (garbage piles) dating to about 300 BCE. Middens found on an island off the California coast reveal that people have eaten abalone there for more than 12,000 years.

Corresponding with its growth and the color of the algae it was eating, the inside of the abalone’s shell is lustrously silver and iridescent with greens, blues, pinks, and purples. In addition to the animal’s value as food, people have valued its shells for decorations, jewelry, and crafts in several coastal communities, notably the Māori people of Aoteaora New Zealand, who know the abalone as paua, embedding the shell in wood and using it to help fish hooks shimmer.

On Jeju Island, where the soil is poor for farming, it used to be primarily men who dove for abalone, while the women gathered seaweed. In the 1600s and early 1700s, men began to leave the island, either to fish farther offshore, to man warships, or to move away in search of better jobs and escape from paying tributes. Meanwhile, dried abalone was part of taxes levied on poorer coastal communities, and people were flogged if the abalone was not delivered. So as the men fled, the coastal diving shifted to women, who were forbidden to leave. There is a line of thinking, too, that women are better equipped than men to withstand the cold because they tend to have a higher percentage of body fat to insulate them from the cold. It is also thought that perhaps the Jeju women were more emotionally equipped and physically better skilled to hold their breath for minutes at a time, working in collectives and diving in pairs to depths often in excess of fifty feet beneath the surface. As the decades wore on, women went to work at sea during the day while men stayed ashore for manual labor. Haenyeo dove while pregnant and sometimes brought their infants on the boats with them so that they could nurse them in between diving sessions. 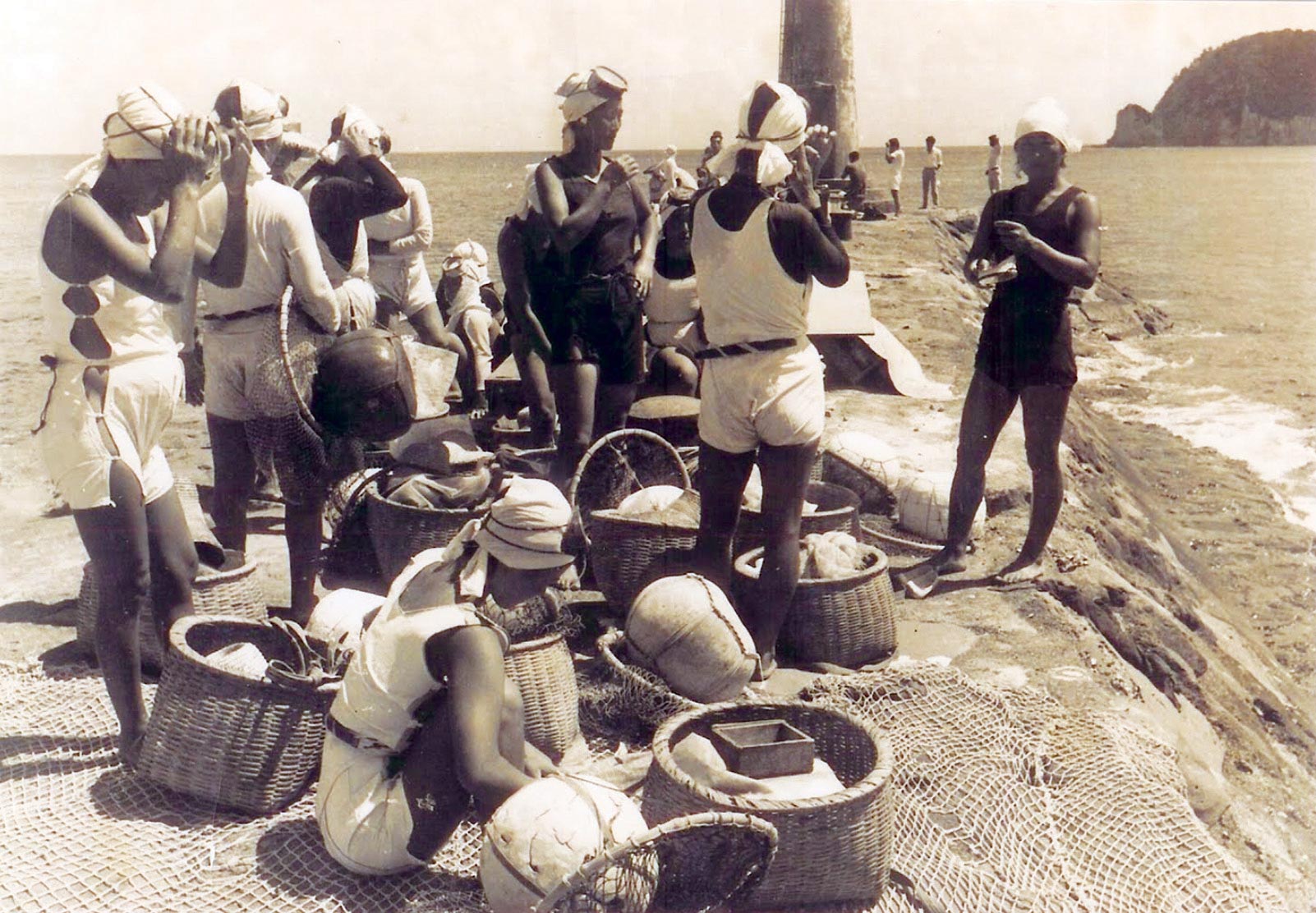 Haenyeo preparing for a dive off Jeju Island, South Korea, c. 1960s. This was just before they began to use wetsuits, fins, and weight belts. Photo courtesty of Eju Provincial Self–governing Haenyeo Museum.

In The Island of Sea Women (2019), a historical novel by Lisa See, the ability to capture an abalone is a rite of a passage. The author set most of her story in the late 1930s into the 1950s, when haenyeo had not yet begun to use wetsuits; they wore only cotton swimwear and dove barefoot. Haenyeo swim out with a net attached to a taewak, a buoy float, and dive carrying a knife for emergencies and a bitchang, a flat metal crowbar, which is strapped around one wrist. Sometimes haenyeo dive with a small spear, a hooked tool, or a seaweed sickle, depending on what they’re hunting. In this tragic scene in the novel, the daughter, named Young-sook, remembers her first dive for abalone with her mother, the chief haenyeo: 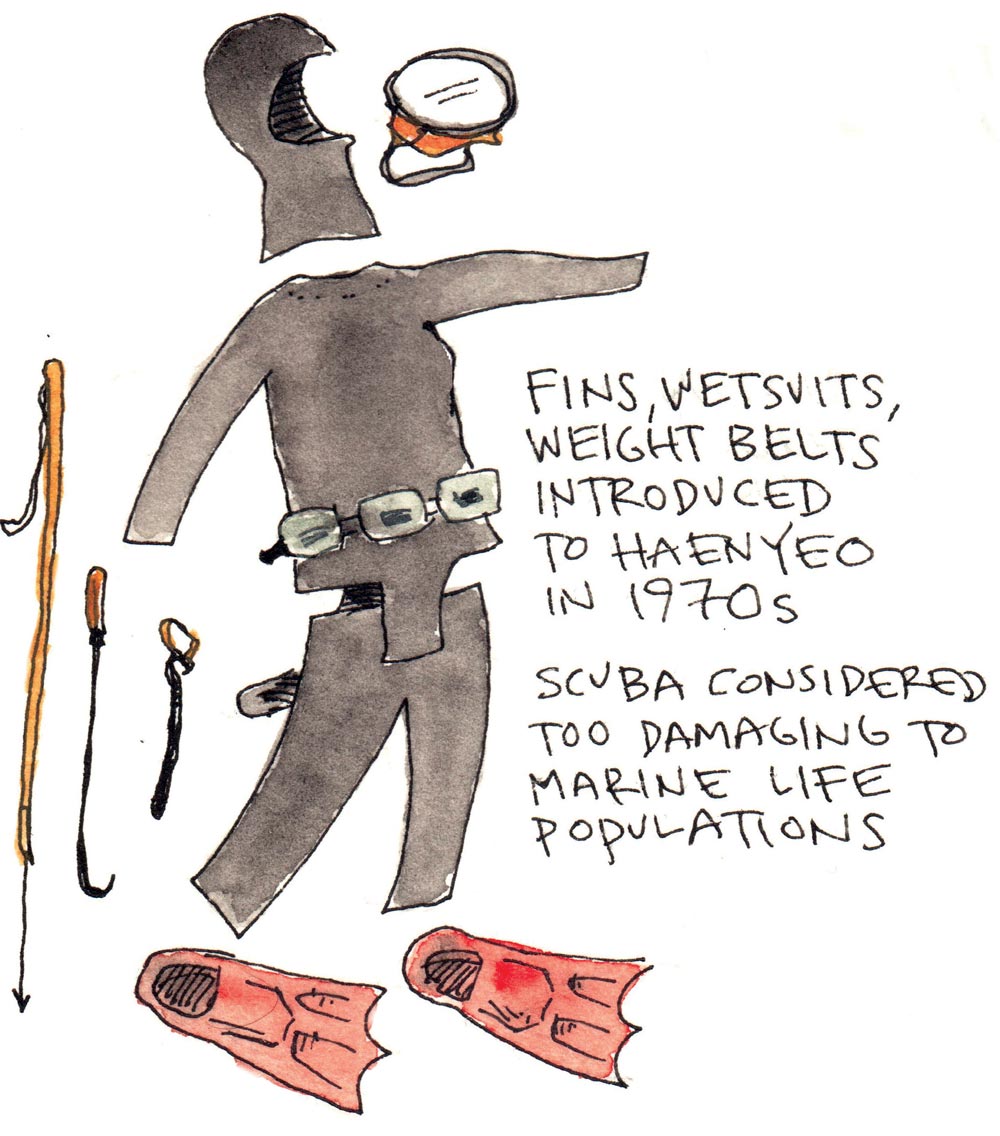 We approached slowly so as not to disturb the waters. As fast as a snake striking its prey, I thrust my bitchang under the lifted edge of the abalone and flipped it off its home before it had a chance to clamp down. I grabbed it as it started to fall to the seabed. Seeing I was successful and having more air than I did, Mother thrust her bitchang under another abalone just as I started to kick for the surface.

Young-sook emerges and triumphantly holds up her first abalone. The older haenyeo shout their congratulations. Young-sook, “following tradition,” rubs the abalone along her cheek “to show my affection and gratitude.” But then she realizes that her mother has not yet surfaced. She dives back down to find that her mother’s bitchang is seized by the abalone. Her mother can’t get the tool free. She had dropped her knife trying to cut the strap around her wrist. Young-sook, only about fifteen years old, tries to help. The two fumble with her knife, cutting the mother’s wrist. The sea clouds with blood. Her mother kicks and pulls frantically against the abalone’s grip. Then she stops. Through her goggles, she looks Young-sook in the eyes to say goodbye before she drowns.

Young-sook returns to the surface without her mother. See tells the story of how she lives the rest of her life with the knowledge that she was not only unable to free her mother, but perhaps her triumphant kick had startled the abalone to clamp down on the rock and seize her mother’s bitchang. Young-sook goes on to be the haenyeo chief, but her life is a hard one. In The Island of Sea Women, Lisa See shows readers the dangers that the haenyeo have endured in order to provide abalone for consumers ashore. 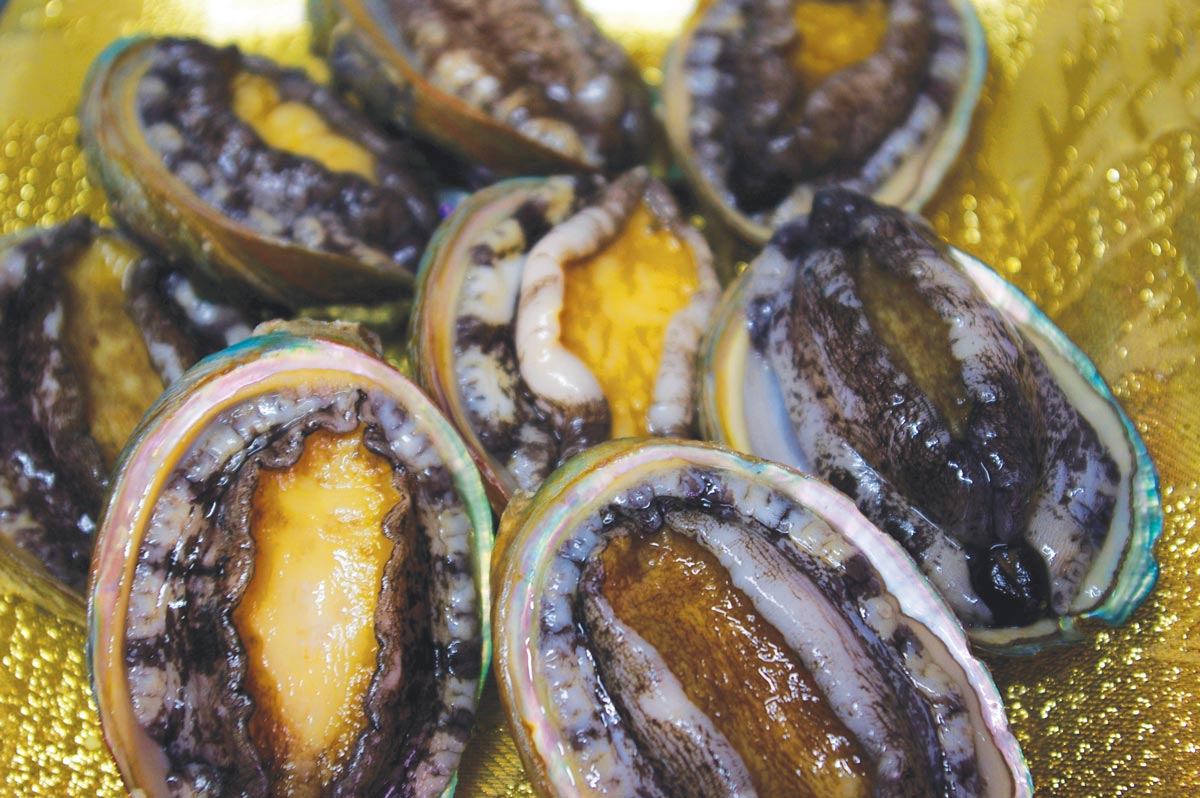 Fresh abalone, ready for cooking in Korea. Photo by Achimkkulmul, cc by 3.0 via flickr.

Today, several abalone populations around the world are threatened, largely due to overharvesting, coastal pollution, and climate change. This is especially true off the west coast of North America, where six species were abundant only decades ago. Now, at least two are on the brink of extinction. If you’re eating abalone at a sushi restaurant, there is a good chance it has been raised in an aquaculture facility. On Jeju, the haenyeo have been sustainable harvesters for centuries. They have been careful as to where and when and at what size they gathered abalone and other marine life in order to maintain the stocks for their daughters and their daughters’ daughters. Their coastal territories are delineated and self-regulated. They shun SCUBA gear. They and local managers seed growth for snails and abalone, and they have managed seaweeds to clear rock substrate for the shellfish. Yet, despite all these efforts to sustain the population, abalone seem to have all but disappeared from their coastal waters for reasons that might have to do with climate change or coastal pollution.

And the haenyeo themselves are also endangered. Listed by UNESCO as an Intangible Cultural Heritage of Humanity, more than ninety percent of the women divers are over sixty years old today. In 1965 there were about 23,000 women fishers on Jeju. By 2019, there were only 1,579 registered haenyeo on the island. Nearly all of the younger generations have sought other jobs where the work is not so hard and dangerous. 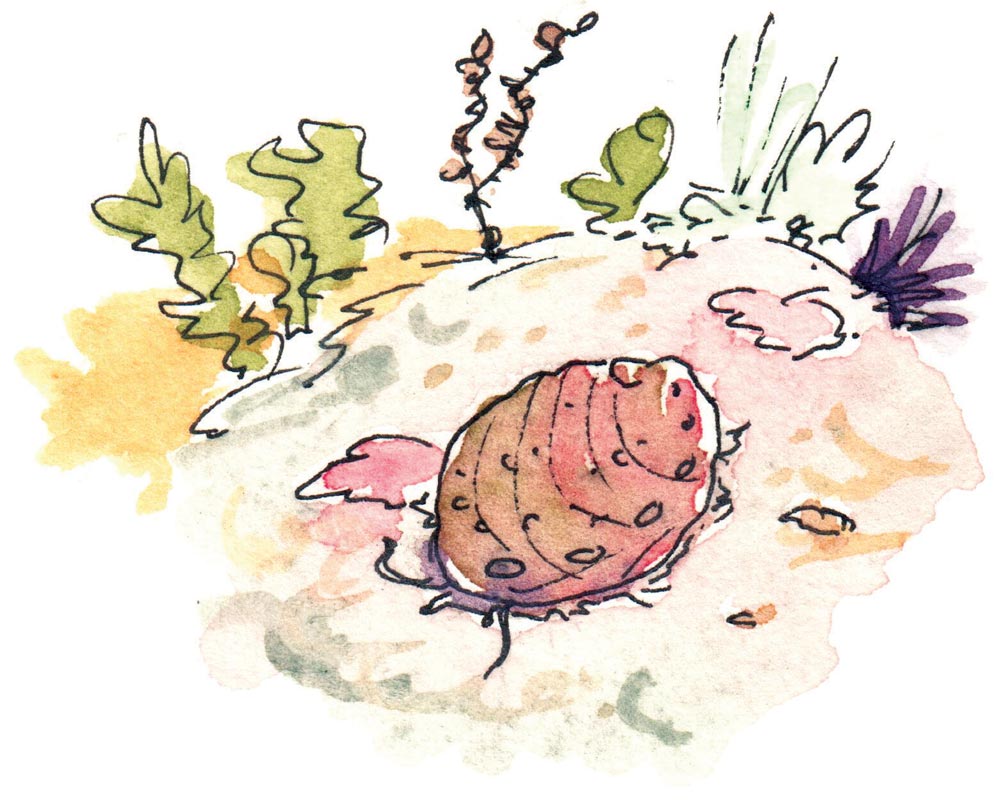 When asked how her life as a haenyeo has changed in the last fifty years, Lee Mae-chun said in a 2017 interview: “Abalone was also easy to spot and to collect, but these days, no more. I still remember the excitement of catching a lot of abalone during one dive. Abalone was very valuable and you could earn good money for it.”

For more “Animals in Sea History,” go to view more Sea History for Kids or educators.mysticseaport.org.