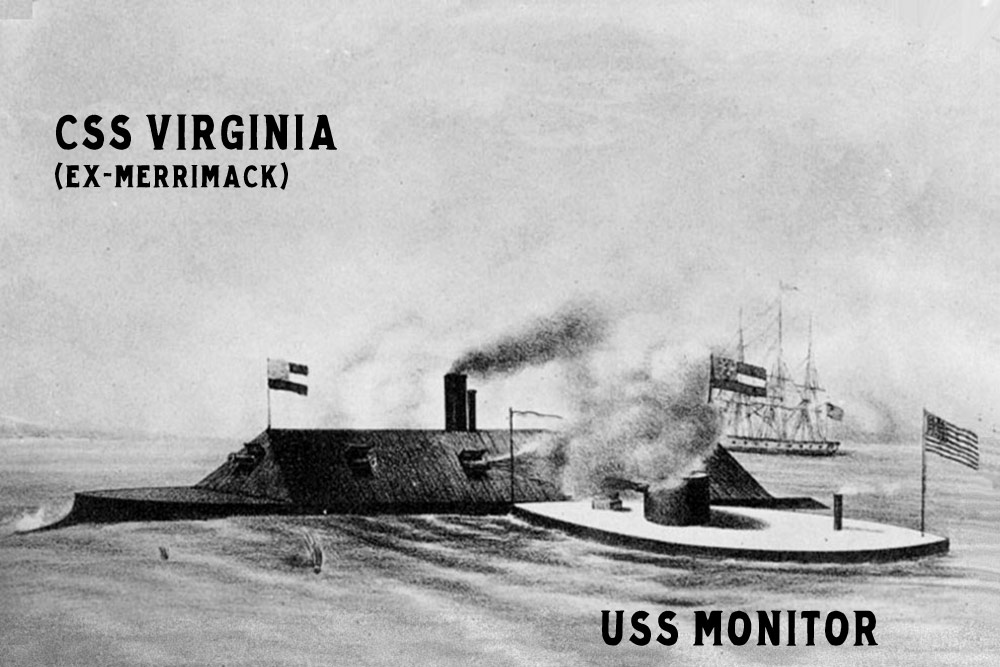 USS Monitor is one of the most famous ships in history, and in early March 1862 she fought in one of most important naval battles in American history, the Battle of Hampton Roads. Funny thing is—neither side won! 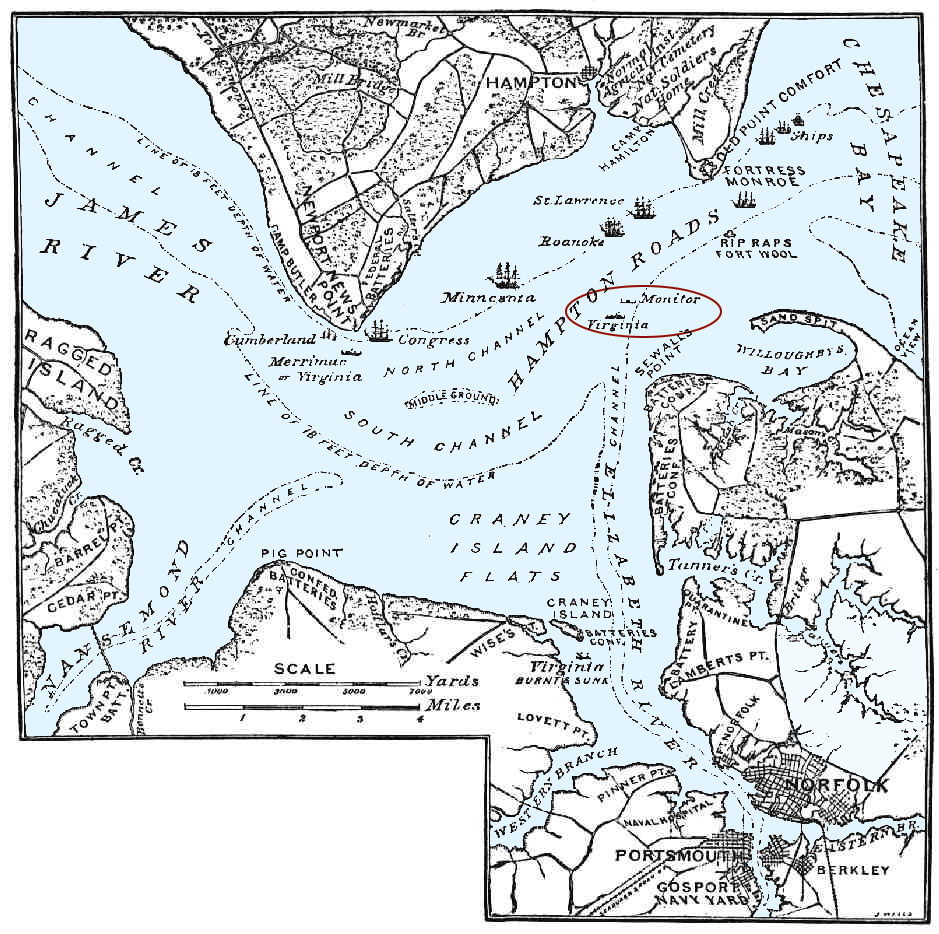 Monitor and Virginia in the first battle between ironclads.

Just into the second year of the Civil War, the Confederate Navy ship Virginia attacked a group of US Navy ships that were anchored in Hampton Roads, a roadstead off Norfolk, Virginia. The battle lasted into the next day, but during the night, the Union naval ship USS Monitor arrived on the scene and engaged the Virginia in a four-hour fight the next morning. The battle ended in a draw—so why is it considered such an important event in our history?

Until this time, ships were made from wood and powered by sails, but shipbuilders and engineers had been experimenting with iron for shipbuilding and steam engines for power. Both the Monitor and the Virginia were of the new type—they were powered by steam engines and were clad, or covered, with iron plates for armor. This was the first time in history two ironclad steam-powered ships had fought against each other in battle, and it changed the way navies around the world built ships and fought wars. After people heard about how neither ship was able to destroy the other, navies stopped building wooden sailing warships and started adding ironclad steamships to their fleets.

A roadstead is a place where ships can safely ride at anchor, usually just outside of a harbor or near a major port.

Sometimes people refer to the Battle of Hampton Roads as the Monitor vs. the Merrimack. The Merrimack and the Virginia were the same vessel. In April 1861, the Confederate Navy had salvaged the hull of the steam frigate USS Merrimack, which the Federal forces had burned to the waterline when they evacuated the Norfolk Navy Yard. They changed the ship’s name to Virginia and converted her to an ironclad steamship. 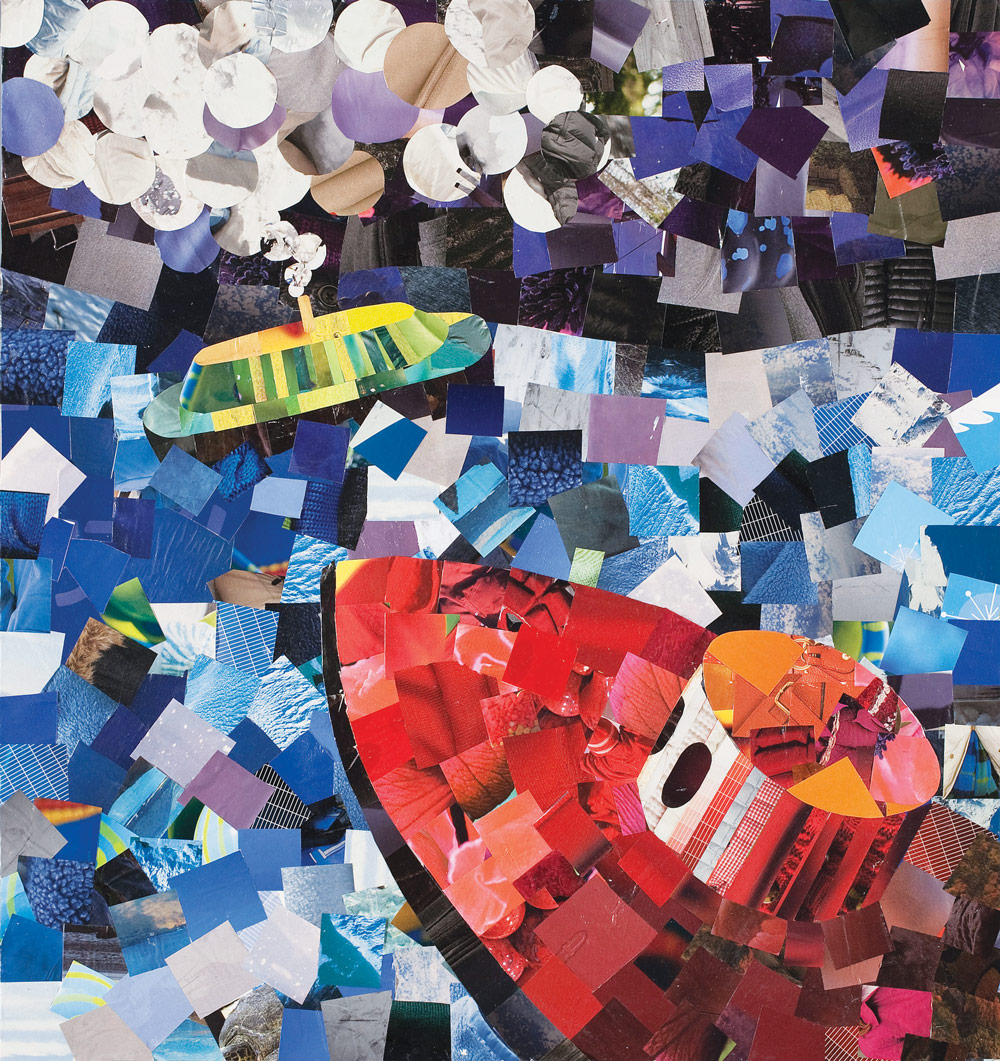 Courtesy of the Mariners Museum and artist Calvin Nesbitt.

USS Monitor sank off the coast of North Carolina on 31 December 1862. When he heard that she was lost at sea, Grenville Weeks, Monitor’s former ship’s surgeon, wrote that he hoped that “the work of the Monitor [would] be remembered, and her story told to our children’s children.” In the spirit of keeping her story alive, the Mariners’ Museum and NOAA’s Monitor National Marine Sanctuary recently hosted a juried youth art competition on the Battle of Hampton Roads. Kids ages 4-18 from across the country submitted 125 pieces of art, and prizes were awarded in three age groups. Calvin Nesbitt, 16, of Yorktown, Virginia, took first place in the 13-18 year-old category.

See his “Clash of the Ironclads” on display with other works from the competition at the Mariners’ Museum in Newport News, Virginia, through 15 August 2010 or online at www.mariner.org. Congratulations Calvin!

To learn more about the Battle of Hampton Roads and the Monitor shipwreck, visit the USS Monitor Center at the museum at 100 Museum Dr., Newport News, VA 23606; or visit the NOAA Monitor National Marine Sanctuary web site at https://monitor.noaa.gov.