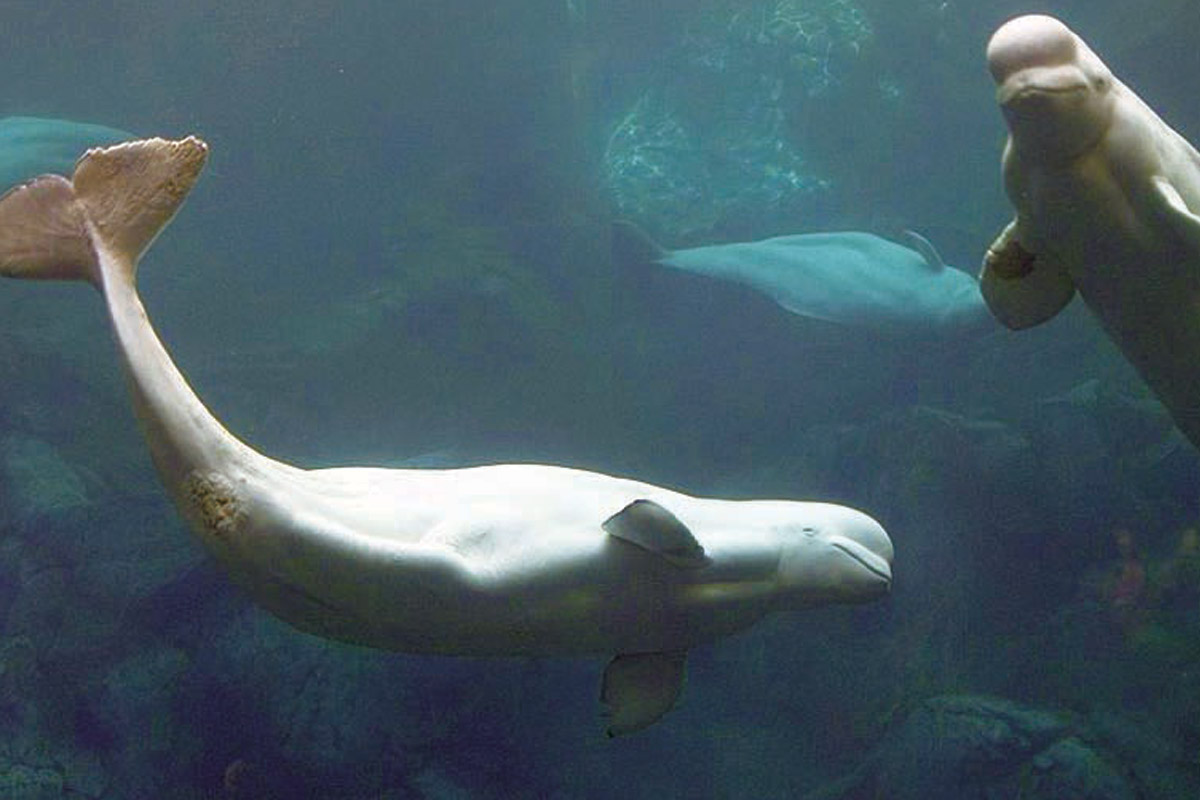 Scientific Name:
Delphinapterus Lecas
Lifespan:
30-50 years
The beluga grows up to 14-16 ft in length and averages 3,500 lbs. Larger for male belugas. They do not have a dorsal fin. This allows for swimming under ice in shallows. Wide flippers aid backwards swimming. A malleable oil-filled melon focuses echolocation. 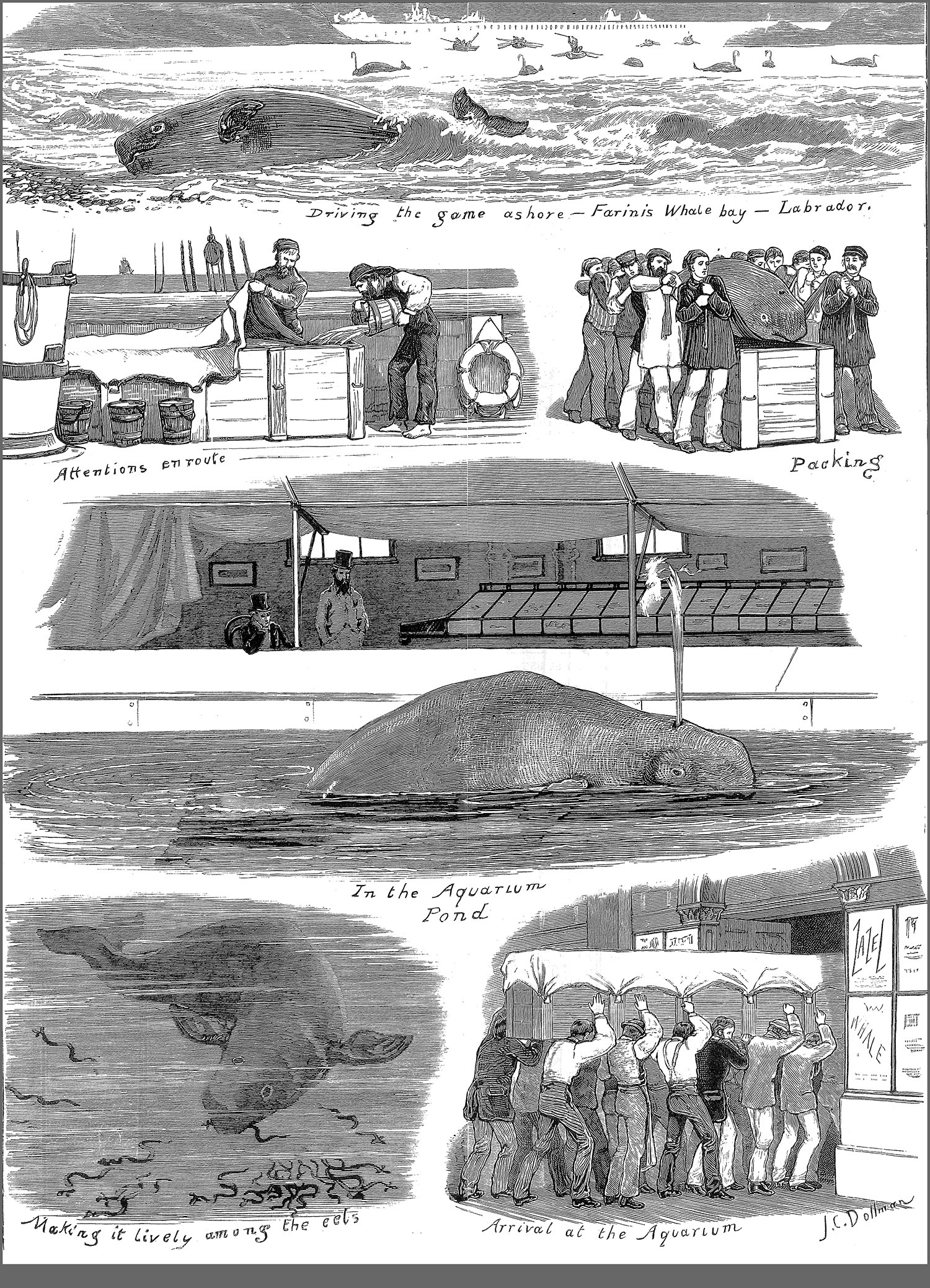 This collage of illustrations appeared on 8 June 1878 in a London newspaper called The Graphic. The story does not have a happy ending, but it is worth considering because it teaches us about a specific kind of whale, about marine mammal biology in general, and about how the way we think of these animals has changed over the last 140 years.

In 1877, the Royal Aquarium at Westminster, England, agreed to buy a nine-foot female beluga whale that had been captured in Labrador, Canada, where they were hunted commercially at the time. Beluga whales, found in Arctic and sub-Arctic waters, were then more commonly known as “white whales” or “white porpoises” because of their brilliant white skin and medium-sized bodies. Perhaps the artist here thought she was a young beluga, which can range from light grey to nearly black.

After her capture, the beluga was sent on a sailing ship to Montreal, transported by train to New York, and then placed on a steamship across the Atlantic in a wood box on a bed of seaweed. During the passage she was doused regularly with seawater. Scientists knew then that marine mammals, which breathe air, can survive for quite a long time out of the water, as long as their skin is kept moist. The men believed that if they transported the whale in a tank she would have been injured sloshing around on a ship. Meanwhile, the staff at the aquarium in England built a custom-made iron pool for her and filled it with fresh water. After the whale arrived, they transferred her to the pool and fed her live eels.

Having survived her long journey, first overland to New York and then by ship across the Atlantic Ocean, the beluga only lived for four days at the aquarium. Perhaps she died from stress or exhaustion. Maybe her internal organs and muscles were damaged, since whales are not built to withstand the pressure of their heavy bodies on a flat surface for a long time. It is unlikely that the beluga died from being placed in fresh water, because belugas often make their way up rivers, far from the sea and salt water, and do just fine. The aquarium staff that examined the animal after it died, including a naturalist named Henry Lee, found pneumonia in her lungs, likely from the trip across the Atlantic. The men in charge of her care did not understand at the time that whales have difficulty managing their own body heat when out of water. With her thick layer of blubber, the beluga might have actually been too hot. Today, when whales are transported, ice bags are placed on the animals’ flukes, and they are kept in water during travel. 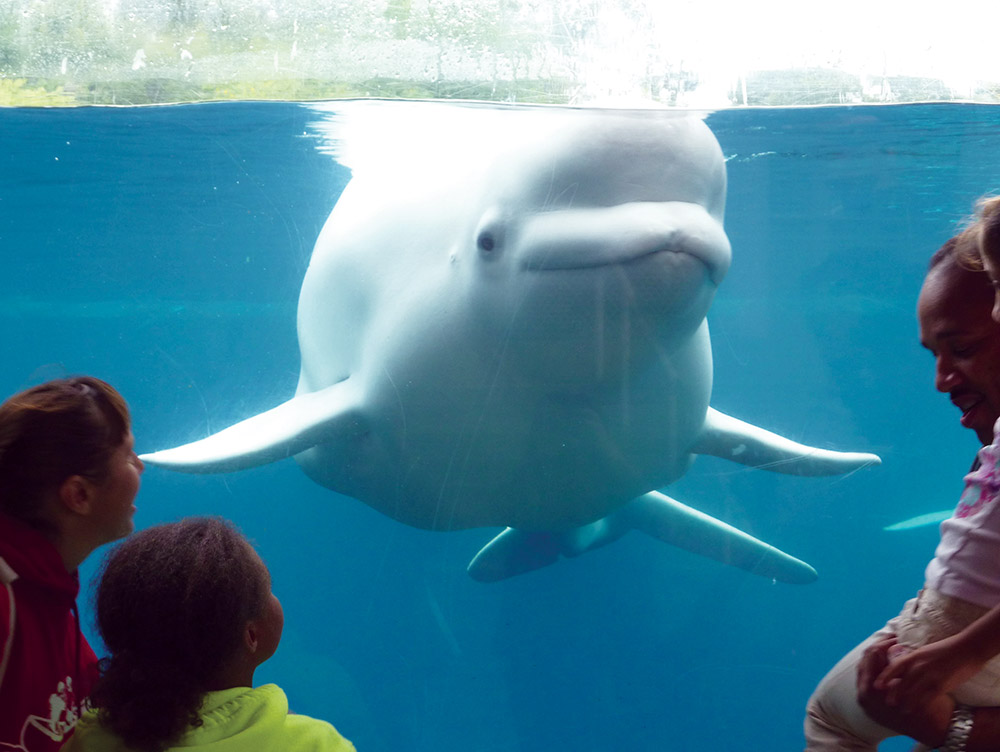 In telling the story of this whale, Henry Lee wrote about belugas, which were the first whales that aquariums regularly displayed in the United States and in Great Britain, even before they displayed dolphins. Lee wrote: “The blowing of the Beluga is said to be not unmusical at sea. When it takes place under water it often makes a peculiar sound, which might be mistaken for the whistling of a bird; hence one of the names given to it by sailors—the ‘sea canary.’”

First observed by the Inuit of the Arctic, and then later by European explorers, whalers, and fishermen, beluga whales do have some of the most varied vocalizations of any marine mammals. From their blowholes, they make a range of sounds that include moos, whistles, tweets, and a wet brambling sound that is an awful lot like a flatulent toot. With echolocation through their oil-filled melons, belugas send out an even greater variety of clicks, squeaks, and rattles, some of which are too high-pitched for humans to hear. 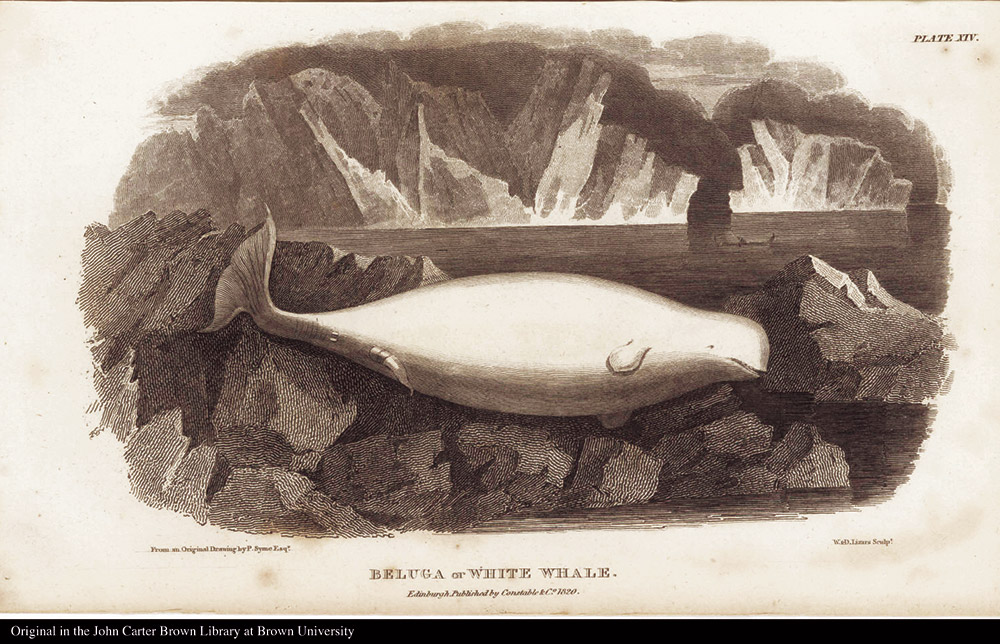 Lee and his fellow scientists wondered about the intelligence of these white whales when they discovered that a beluga’s brain is larger than a human’s.

Modern aquariums in the US and Britain no longer collect marine mammals unless the individual would otherwise die at sea because of poor health. Debates around the ethics of keeping beluga whales in aquariums remain in the 21st century. Even as exhibit tanks are now far larger and healthier than they used to be, and the quality of care has vastly increased, no aquarium can mimic the belugas’ life in the wild.

Whales living in aquariums provided then, as they do now, learning opportunities for people who might help wild populations. Henry Lee wrote of the beluga’s death in 1878: “The public, too, were deprived of a great sight, from an educational point of view. Thousands of persons who had opportunities of seeing the porpoises in the Brighton Aquarium learned then for the first time to appreciate the fact that the cetacean are not fishes.”

Today, scientists still study beluga whales in aquariums. They continue to learn about the behavioral meanings behind their vocalizations and have been developing techniques to study how belugas in the wild are responding to global warming. As more and more Arctic ice melts each year, beluga whales are an indicator species of how animals will respond to climate change:—a canary in the coalmine.

melon: a rounded fatty mass in the front of the head of all toothed whales that is filled with lipids and waxy material and thought to be used in communication and echolocation. 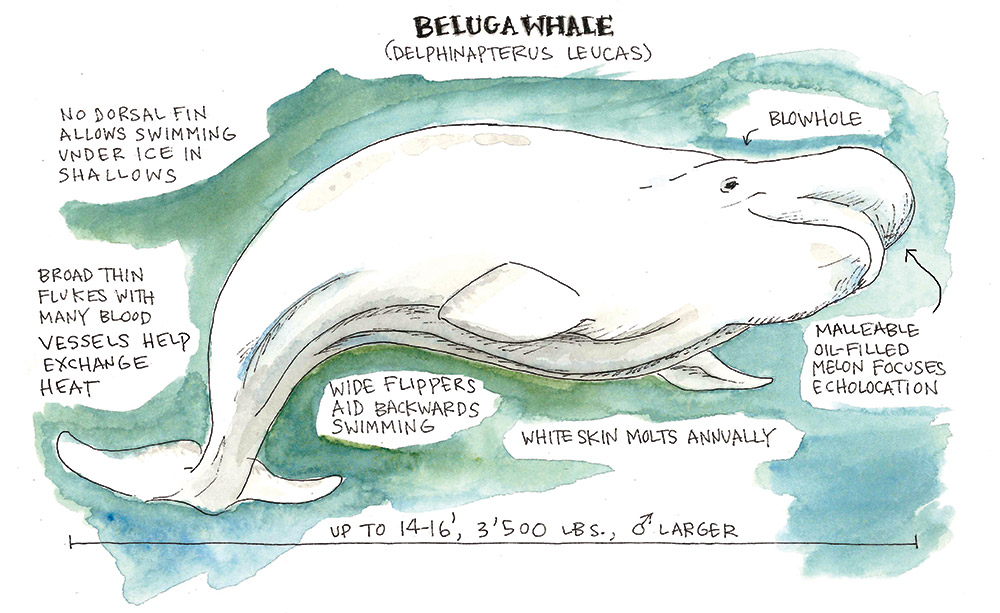