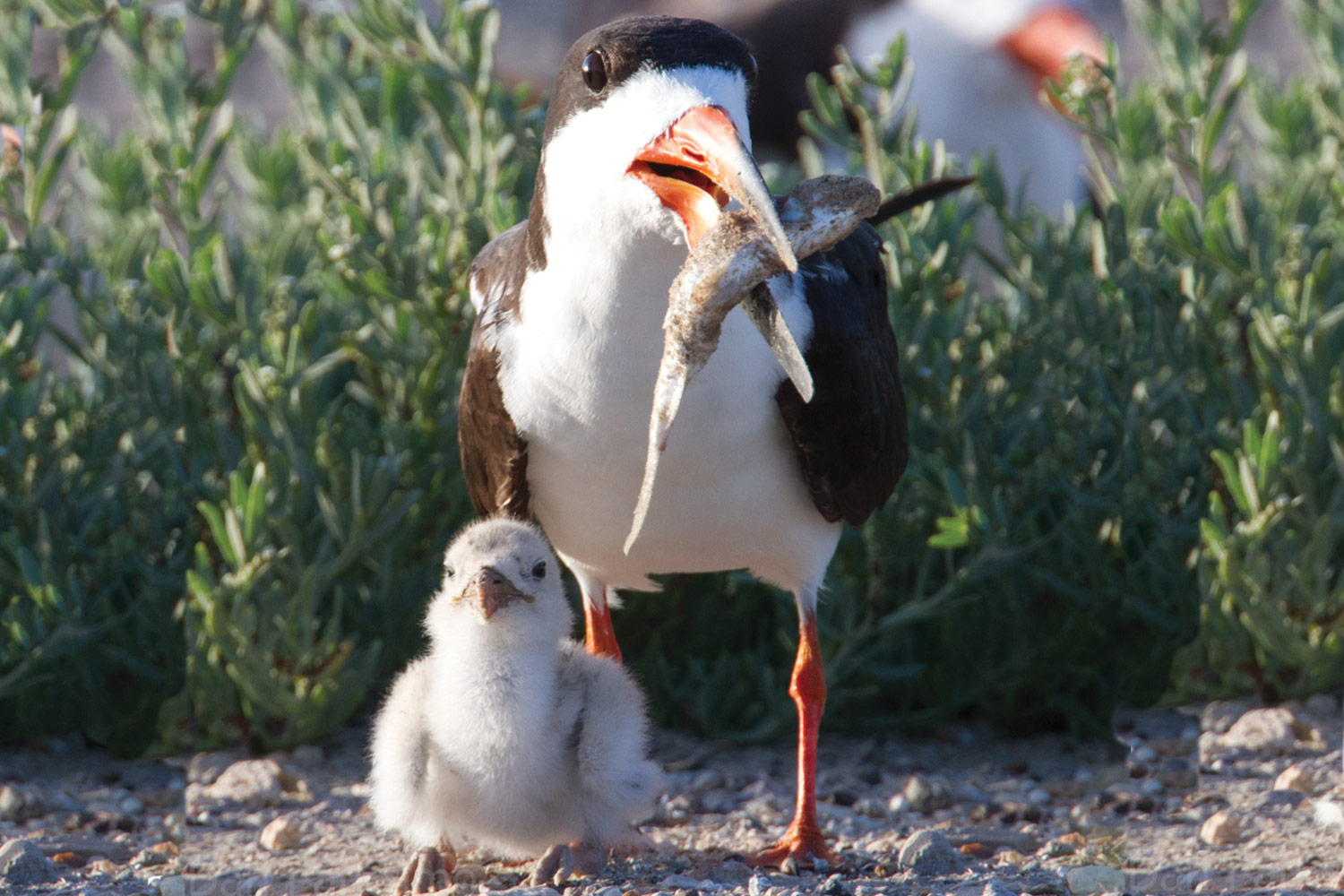 Scientific Name:
Rynchops Niger
A wingspan of nearly 44" with a lightly-forked tail, the female is larger than the male with same plumage. Their breeding range is the sea coast of Baja California around to North Carolina. 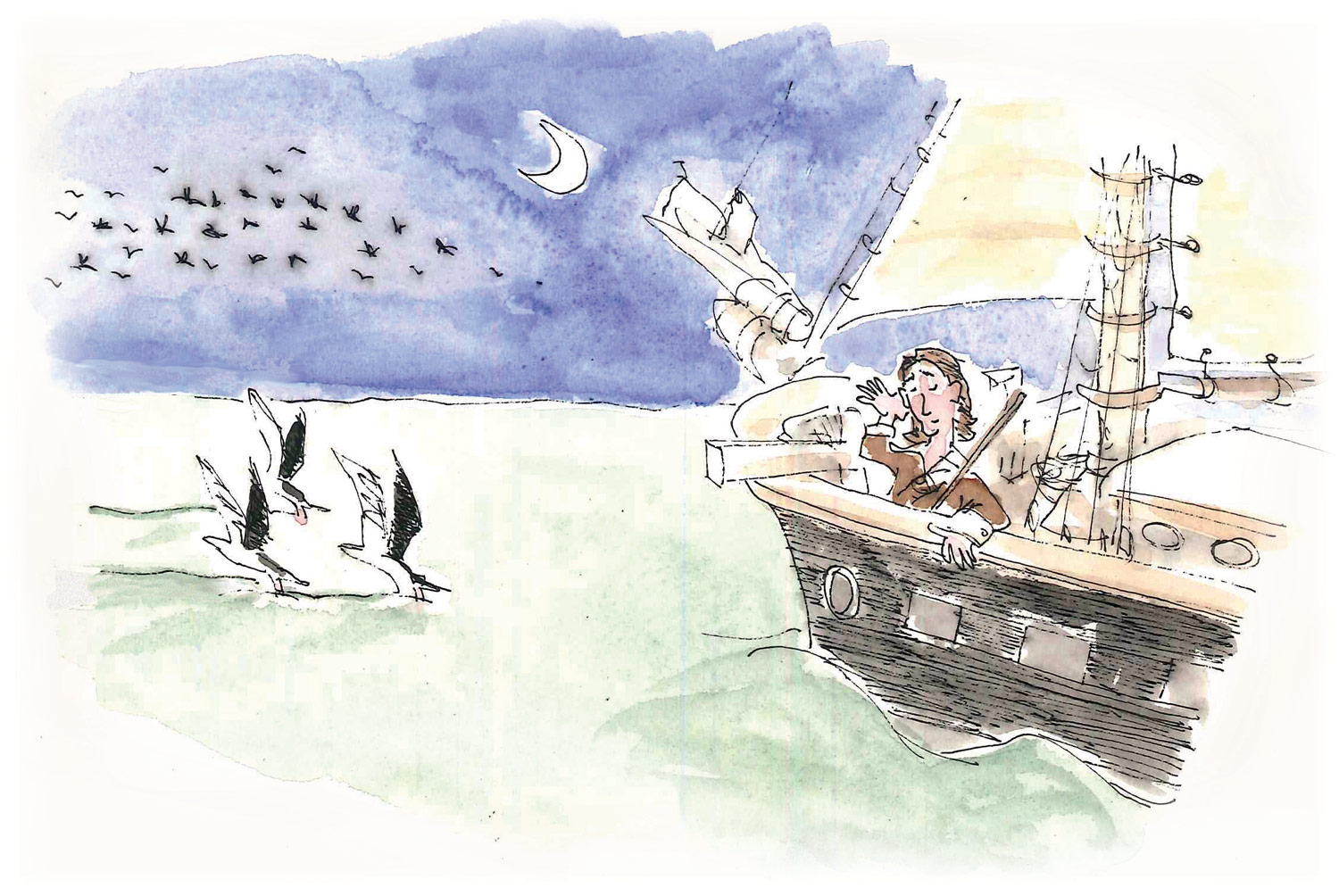 When the artist and naturalist John James Audubon traveled around the coasts and rivers of the eastern United States and Canadian Maritimes in the 1820s and 1830s, he often traveled by sea. Sometimes Audubon paid for passage in ferries or merchant ships, or occasionally he chartered his own vessel with an experienced crew, such as during his trip up to Labrador. On a few other ventures he even sailed as a privileged guest aboard ships of the US Coast Guard and Navy.

In January of 1832 he talked his way aboard USS Spark, before it sailed up the St. John’s River for a five-week mission looking for sources of live oak, the species of tree highly prized for shipbuilding. More than 170 years before Facebook, Audubon wrote to his wife with his quill: “What will my Philadelphia friends say or think when they read that Audubon is on board of [a] US schooner of war…going around the Floridas after birds?”

Although the Spark didn’t get very far upriver because of bad weather and an injury to one of the crew, who shot himself by accident through his hand and forehead (!), Audubon was still able to record some new observations of a particularly spectacular bird called the Black Skimmer, which he also knew by the name of the Razor-billed Shearwater. 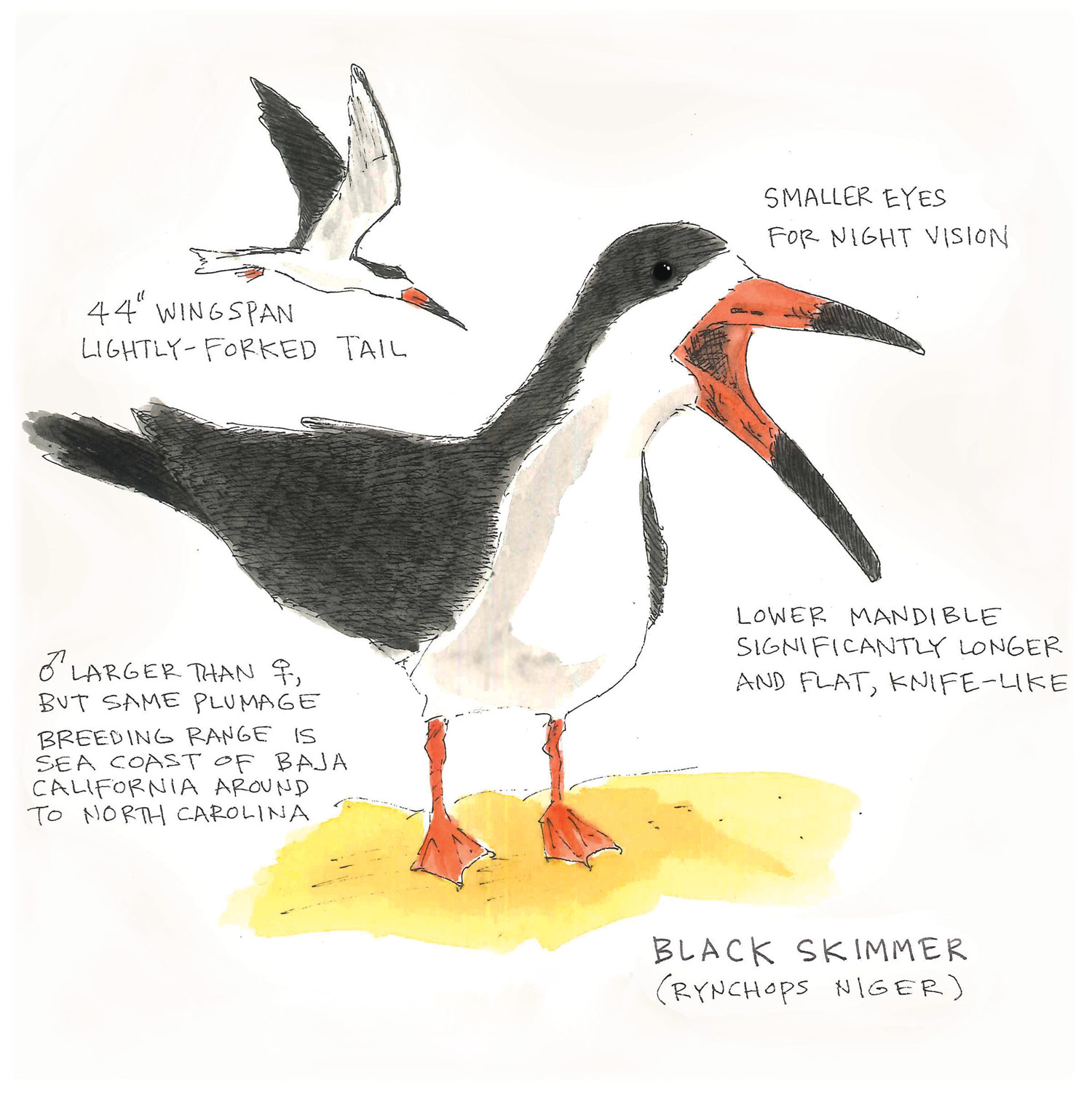 Audubon wrote: “They spend the whole night on wing, searching diligently for food. Of this I had ample and satisfactory proof when ascending the St. Johns River in East Florida in… the Spark. The hoarse cries of the Skimmers never ceased more than an hour, so that I could easily know whether they were passing upwards or downwards in the dark. And this happened too when I was at least a hundred miles from the mouth of the river.”

Nocturnal hunting is part of what makes these birds unique. Black Skimmers, of which there are two other species worldwide, are more closely related to terns and gulls, rather than shearwaters, or even cormorants or pelicans. Most fish-eating birds, other than albatross, do not have a good sense of smell—they hunt their catch during the day using their eyesight. Black Skimmers have relatively small eyes with large dilated pupils so that they can see better at dusk and at night. To accommodate this, they are the only known birds to have pupils that constrict to vertical slits, like cats, to more precisely protect their nocturnal eyes from the glare of bright sunlight and sand.

Audubon wrote further: “I have seen it pass its lower mandible at an angle of about 45 degrees into the water, whilst its moveable upper mandible was elevated a little above the surface. In this manner, with wings raised and extended, it ploughed as it were, the element in which its quarry lay to the extent of several yards at a time, rising and falling alternately.” 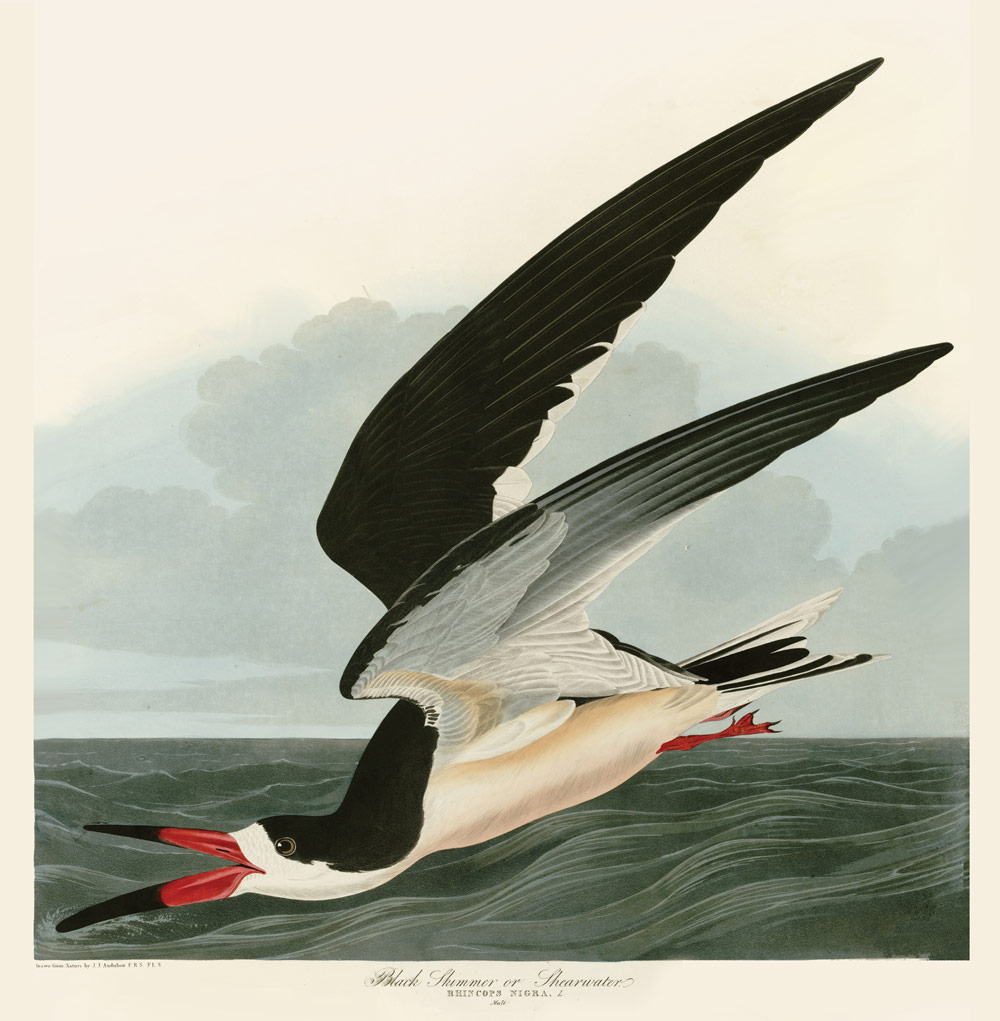 In the 1820s, John James Audubon set out to paint every kind of bird in North America. This is his depiction of the Black Skimmer, published in his book, The Birds of America, published as a series between 1827 and 1838.

He thought Black Skimmers hunted at night in this way with their eyesight, but ornithologists later learned that they also use sensitive nerves in their beaks that respond while moving through the water—snapping shut like a mousetrap as soon as small fish come in contact.

Audubon’s painting of a Black Skimmer in his Birds of America depicts this singular feeding style among seabirds. About a century later, another iconic American naturalist, Rachel Carson, wrote one of the finest descriptions of Black Skimmers in the opening of her first book, Under the Sea-Wind. Carson wrote that the beak on the water’s surface attracted small fish below, mimicking the vibrations made by the fishes’ own tiny food. “The blade or cutwater plowed a miniature furrow over the placid sheet of the sound,” wrote Carson about Black Skimmers along the coast of North Carolina. “Rynchops, wheeling about, returned along the way he had come and snapped up three of the fishes by the rapid opening and closing of his short upper bill.”