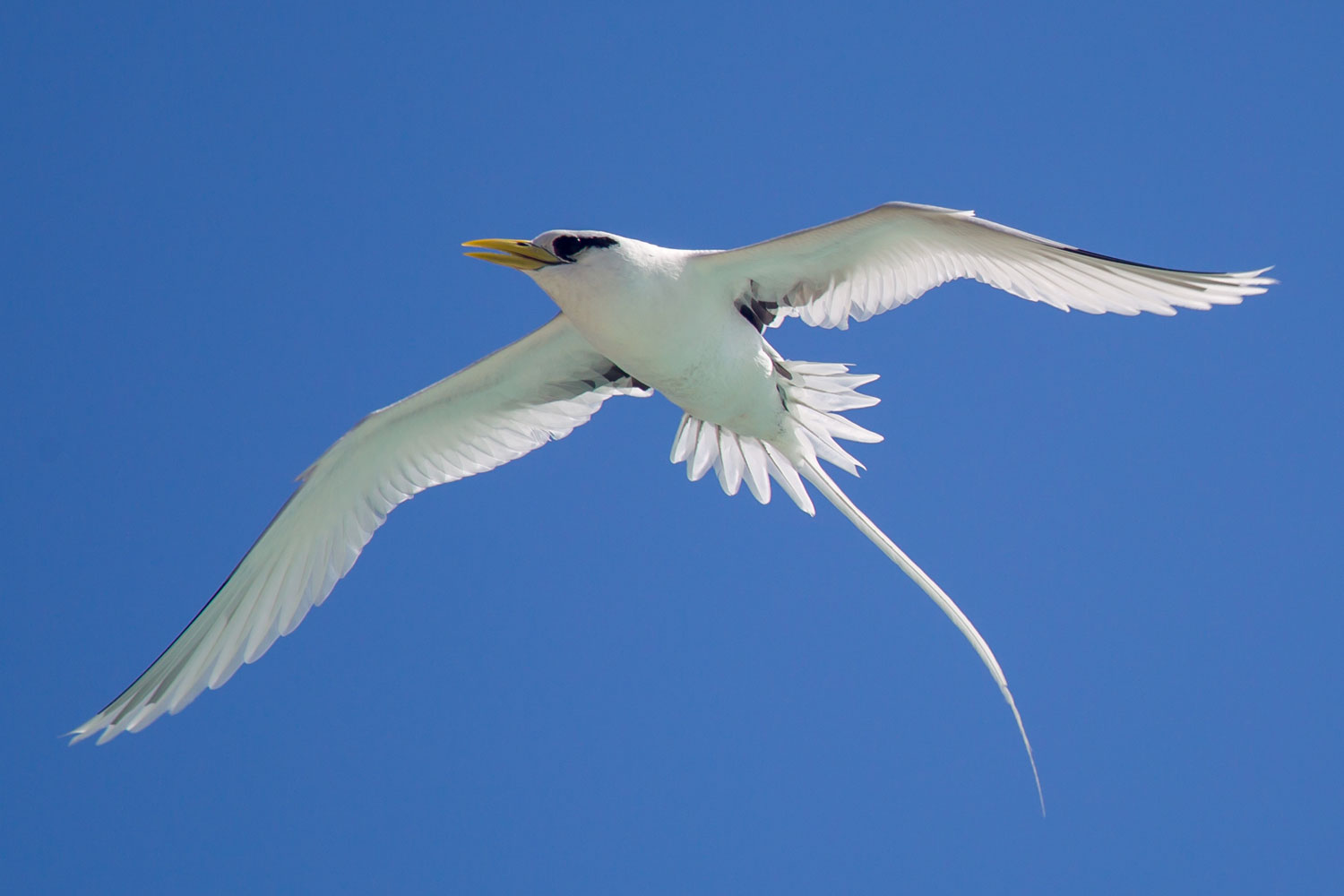 Scientific Name:
Phaethon Lepturus
Usually found at sea alone or in pairs, these birds have serrated bill for holding fish and squid. Air sacs in their heads and neck to cushion when they plunge-diving. Their elongated tail feathers are 11-22" long, at times longer than the body. 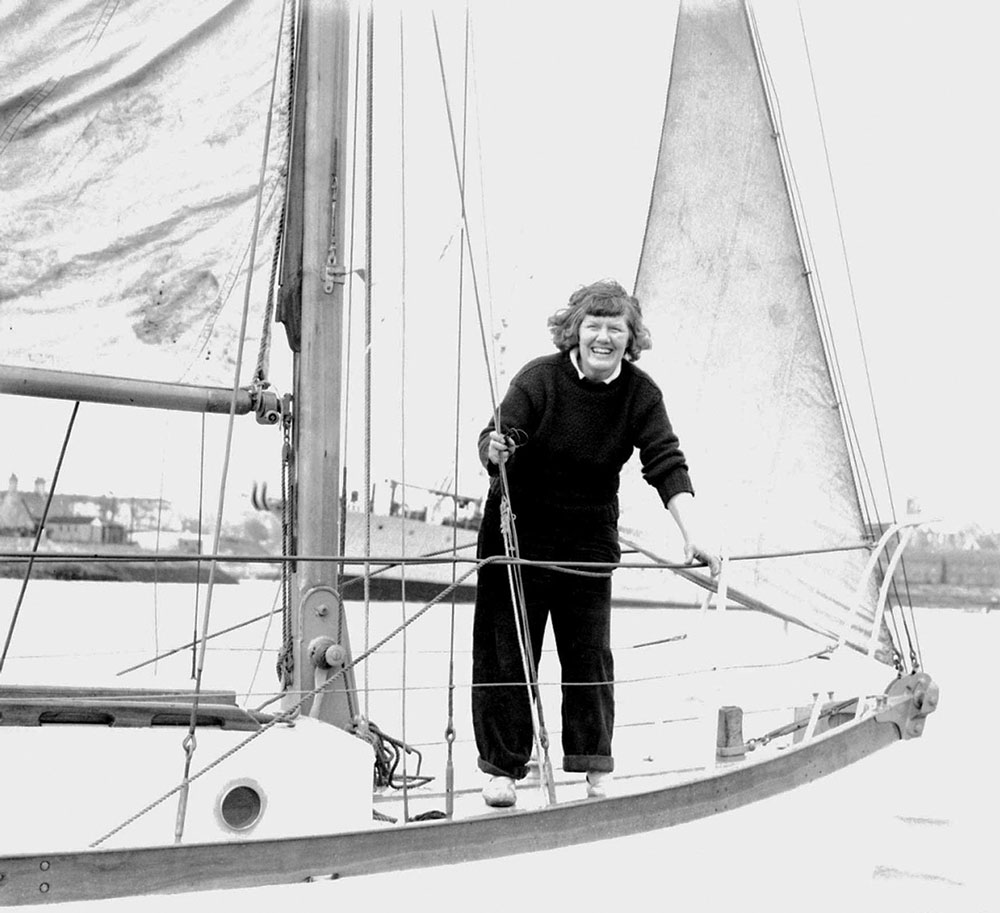 Ann Davison at the start of her 1952 sail across the Atlantic.

By 15 December 1952, 39-year-old Ann Davison had been at sea alone for over three weeks. Aboard her 23-foot sailboat, Felicity Ann, she was about a third of the way through her ocean crossing from the Canary Islands, which would be the first known solo Atlantic passage by a woman. In 1952, there was no such thing as GPS, satellite phones, or long range marine weather broadcasts; radar was still in its infancy and not accessible by recreational sailors. As she used the tools and technology of her day, Davison carried on to the west and south, trying to locate the normally predictable trade winds she’d been promised and upon which sailors can usually depend in these latitudes.

Around noon Davison observed “enormous shoals” of flying fish and dolphin-fish (a.k.a. mahi mahi) in pursuit. She watched large flocks of seabirds soaring and diving. A particular pair caught her attention, and she wrote in her sea journal: “Two bosun birds visit ship with loud squawks and fly around and around mast shrieking ornithological oaths at one another. Flying appears to be a great effort to them and they seem to be on the point of stalls unless flapping furiously with their narrow swept back wings.” 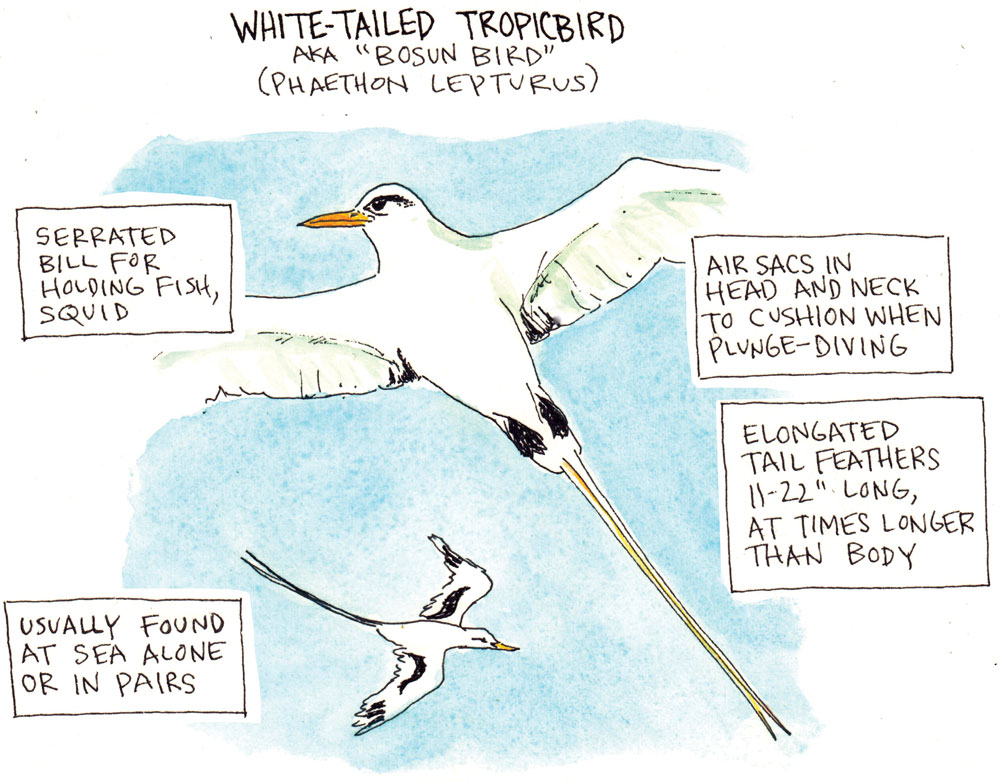 Davison’s birds here are tropicbirds (Phaethon spp.). There are three different species around the world: the red-tailed, the red-billed, and the white-tailed. Based on her geographical location, the pair flying above Felicity Ann were likely one of the latter two species, since the red-tailed hasn’t been recorded in the North Atlantic. All tropicbirds, a bit smaller and more slight than herring gulls, have glistening white plumage as adults. Their narrow tail feathers flow behind them like streamers, and can grow nearly two feet long. Sailors historically called them bosun birds because seamen considered these tail feathers to evoke the marlinspike, a long thin metal tool commonly worn on the belt of a ship’s boatswain (pronounced “bosun”), whose job it was to maintain a ship’s sails and rigging.

Davison made accurate diagnostic observations of her tropicbirds, which are indeed known to hover with rapid wing-beats, unique from other deep ocean seabirds. Tropicbirds, also true to their name today, are found mostly in warmer waters. They hunt fish at sea, sometimes plunge-diving like pelicans, and other times snatching fish just off the surface, like frigatebirds. Tropicbirds usually only come ashore to nest, typically on isolated islands away from predators that would eat their eggs or chicks. 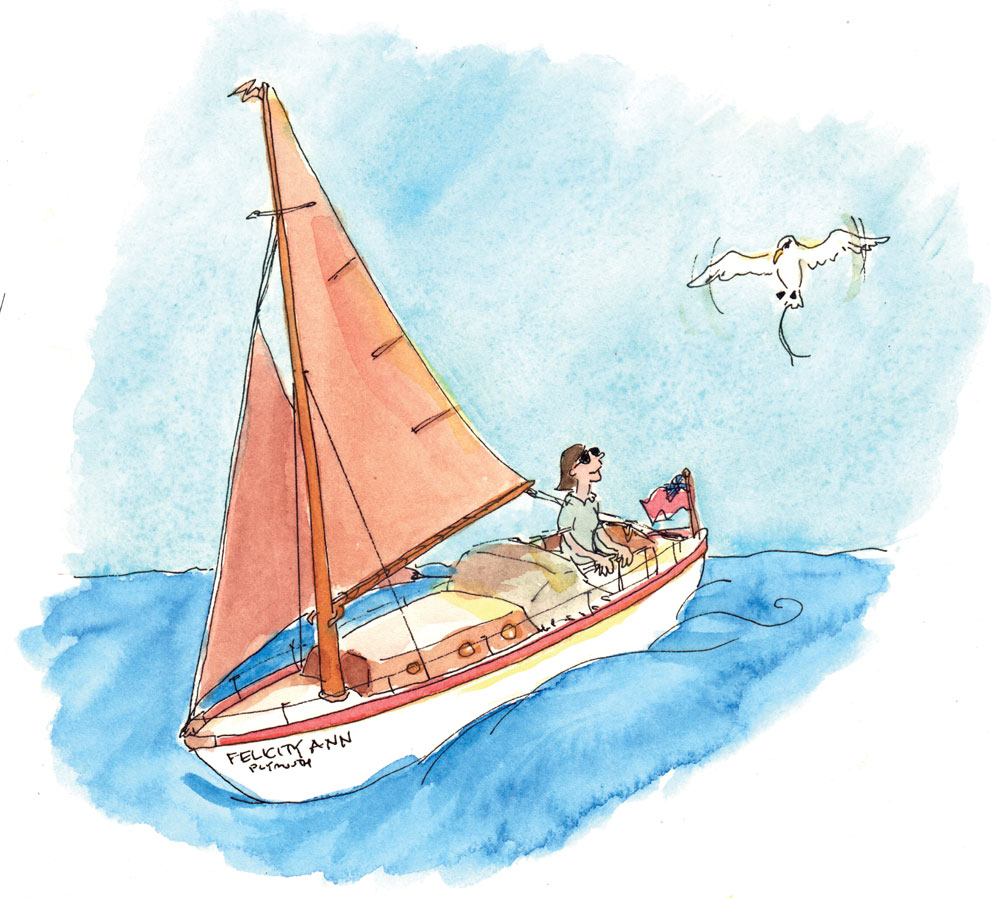 Four days after her first visit from the pair of tropicbirds, Ann Davison saw another from her boat’s cockpit: “Bosun bird, going east, flies past ship without batting an eyelid. This very unusual as these birds take a great interest in F[elicity] A[nn]. So I give a piercing wolf whistle, whereon bosun bird wheels smartly around, flaps back to ship, dives and stalls about three feet from my head, looks sharply at me, decides against whatever he had in mind to do and flies smartly away again.”

The squawks and shrieking of these birds might account for another reason sailors called them bosun birds: on several types of ships, especially in the navy—even today—boatswains carried a metal whistle to deliver shrill commands that their crews could hear over the wind and waves.

After her two sightings of these notable seabirds, Davison continued on her ocean crossing, finally approaching the Caribbean island of Dominica after a nine-week passage. Her history-making, singlehanded transAtlantic sail came to an end when she dropped anchor on 24 January 1953. 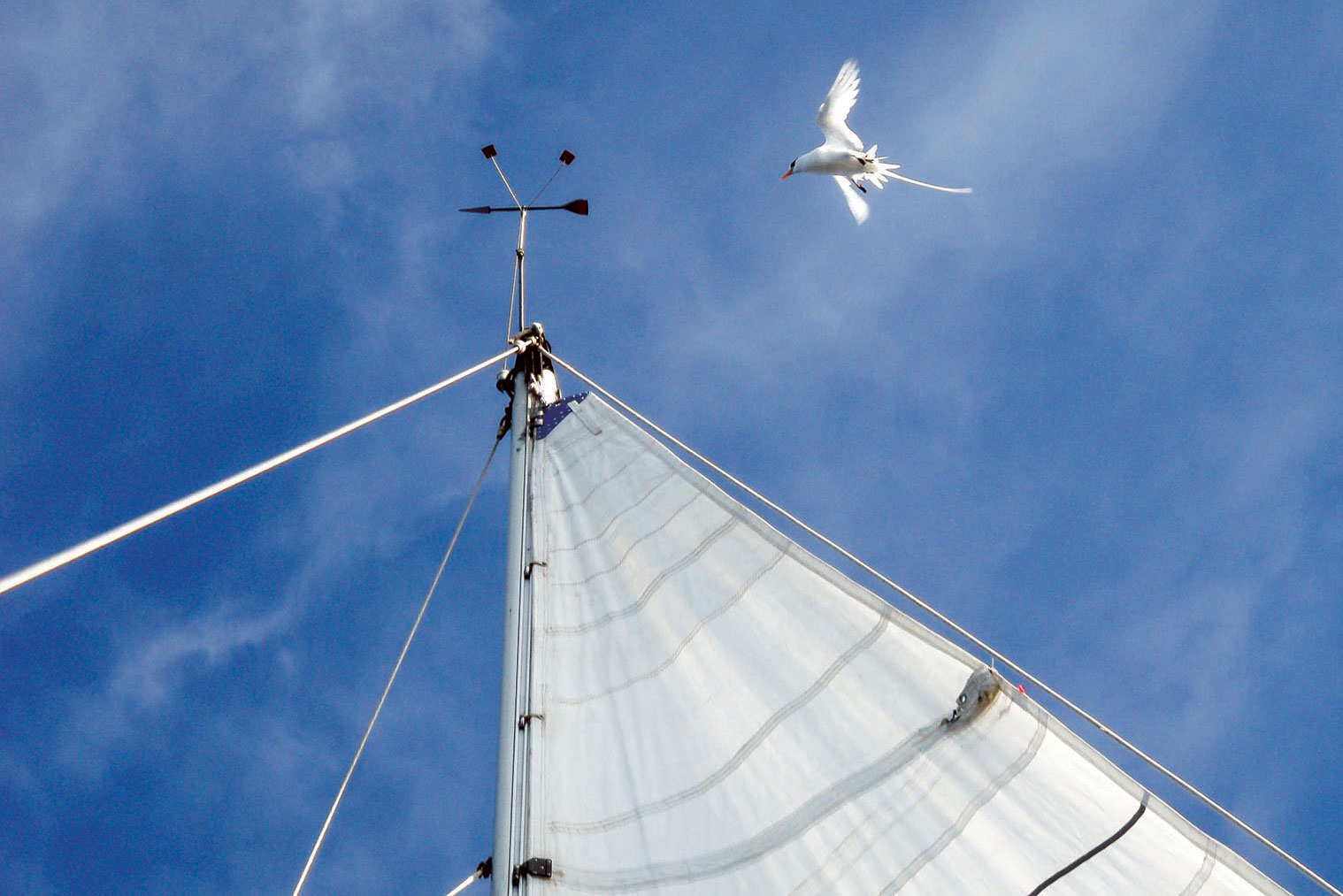 This tropicbird was photographed on a passage between Antigua and Bermuda in June 2010 by Ellen Massey Leonard, from the deck of her 38-foot sloop Heretic.

Davison then sailed her boat up the Caribbean island chain to Antigua, on to the Bahamas, and finally to New York City. At one point on her way through the Bahamas—more exhausted than triumphant—she was working to repair a fresh rip in one of her sails and mulling over how to deal with a failing rudder when once again she looked up and saw a pair of tropicbirds. They were “dive bombing” after a school of little fish near her boat. She thought the tropicbirds sounded so resentful that it was as if they were shrieking to scare her off their waters. “I only wished they could,” Davison wrote, “for this was turning out to be a tedious voyage.”

You can read Ann Davison’s full account in a neglected classic of sea literature, titled My Ship is So Small (1956). Her boat is still on the water today thanks to a careful, complete restoration by the Northwest School of Wooden Boatbuilding in Port Hadlock, Washington. Felicity Ann sailed in 2018 with the Community Boat Project, touring the islands of Puget Sound and sharing Davison’s story, inspiring new generations of sailors and adventurers. This time, however, at these northern latitudes, the voyage of the Felicity Ann was urged on by silent cormorants rather than the whistling, squawky tropicbirds.