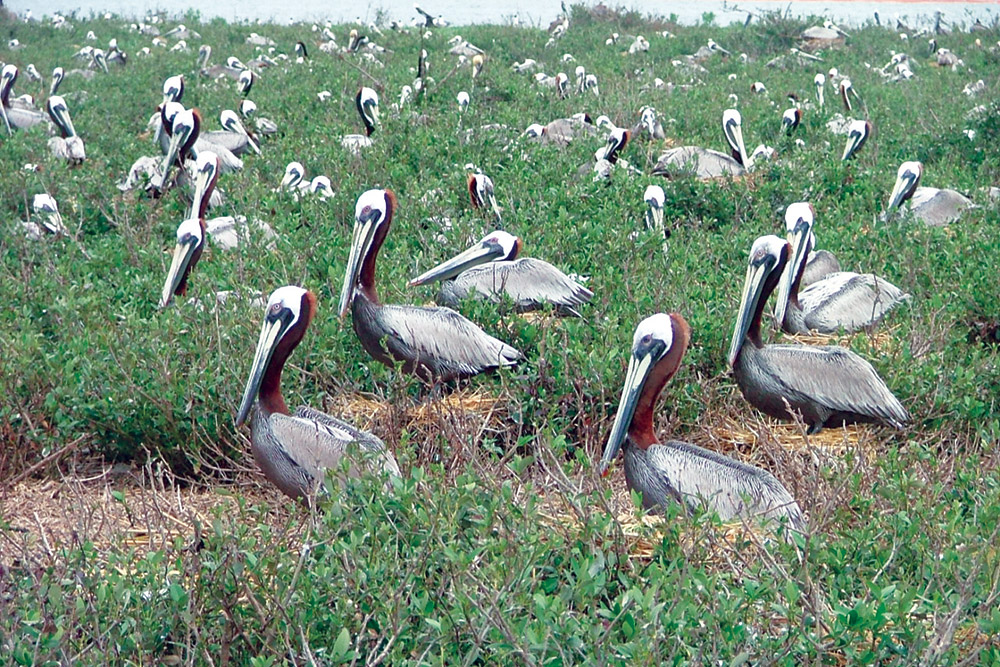 Scientific Name:
Pelecanus occidentalis
Brown Pelicans can plummet dive from more than 60 ft. to catch a fish. Their wingspan can be more than 6 ft. and their gular pouch can hold more than 2.5 gallons of water.

In 1881, Martha Field, writing under the pen name Catharine Cole, became the first woman to work as a full-time reporter for the New Orleans newspaper, the Daily Picayune. In a few years she became nationally known, especially as a travel writer. Often adventuring by herself—sloshing through bayous, rowing in canoes, and sailing on boats and ships—she reported from all over the state of Louisiana and filed accounts from Europe and Chicago. 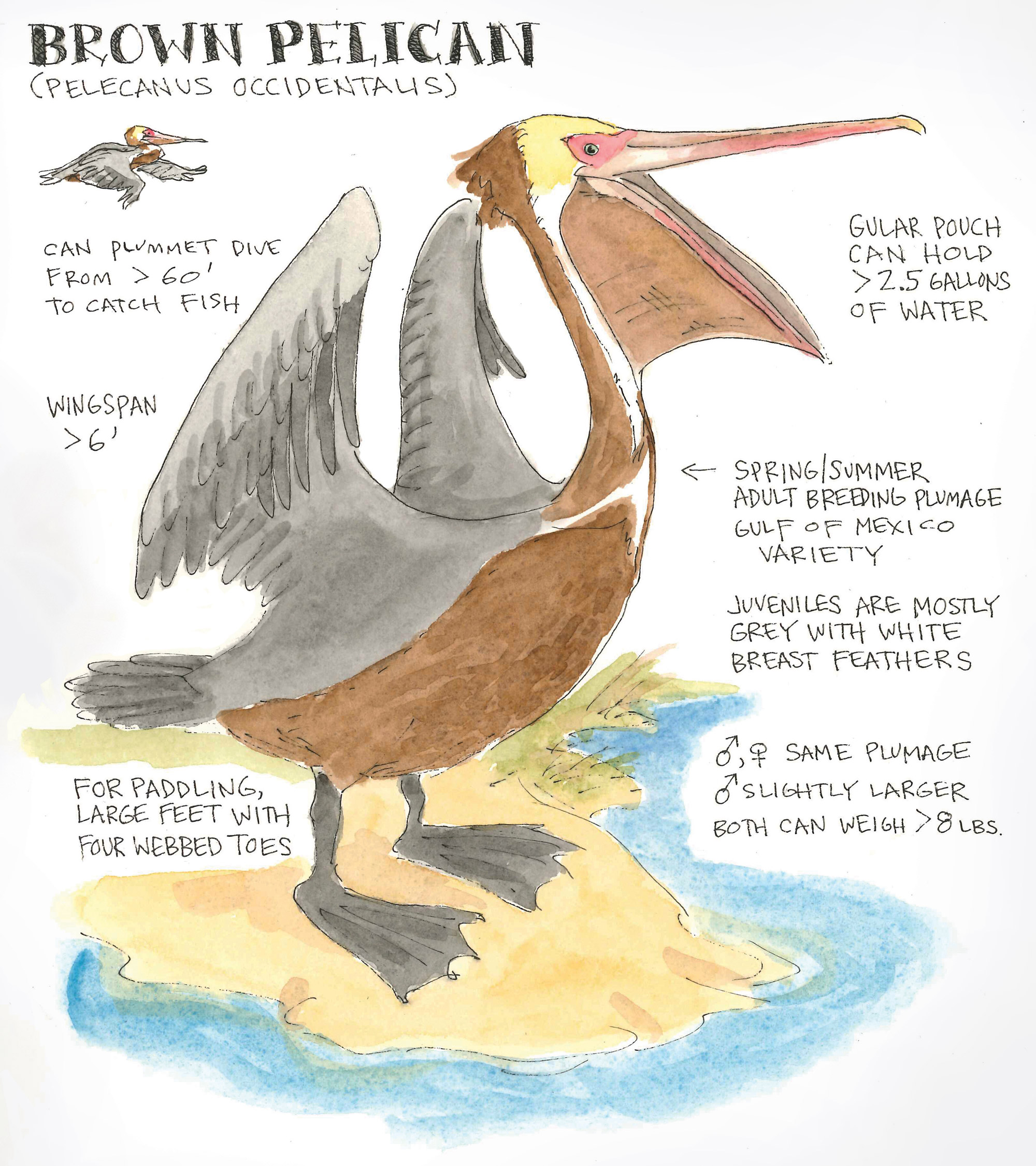 In July of 1888, she published a story about an expedition to Last Island, also known as “Isle Dernière,” a barrier island in the Gulf of Mexico. She chartered a small schooner operated by a couple and their young daughter, who sailed to the outer islands to hunt birds that they could  sell to French hat-makers. Field wrote that the boat was “beautifully-shaped, dingy-green…floating on the water like a pelican.”

Field described the desolation of the long skinny island of sand and low brush. At anchor, they slept on the ship’s deck, protected by mosquito netting. Thirty years earlier a massive hurricane had wiped out an entire resort community on the island, killing about two hundred people and washing away hotels and all the houses.

“Field wrote that Last Island was now primarily “a favorite camp for bird hunters.” Like the other low barrier islands on the Gulf, it was close to sources of fish and at a safe distance from the predators on the mainland. The island supported rookeries of a variety of seabirds, including gulls, terns, herons, and egrets. Field described how the family caught and prepared them for the markets of Paris, including how the “brave young daughter…can also skin, dress, and prepare for shipping no less than forty birds an hour.”

Her description is worth mulling over for three reasons: 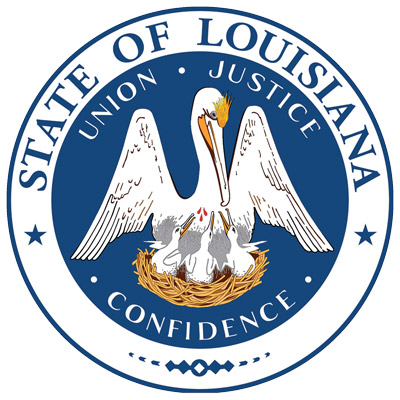 Firstly, as early as 1804, the State of Louisiana had adopted the pelican as the main image on its state seal, featuring a mother pelican with wings outspread, feeding her three chicks with drops of her own blood—an image that has deep Christian roots. A similar illustration is now on the state flag, and in 1966 the Brown Pelican was named the official state bird of Louisiana, the only state to designate  a seabird. Clearly Ms. Field, the daughter, and the bird hunters were not overly sentimental about hunting pelicans, despite the reverence the Louisianans had for them as a symbol.

Secondly, although a bit gruesome, the historic “products” from these pelicans  teach us a bit about these animals. The pelican can fill its enormous pouch with over seventeen pounds of water to catch a fish. Among North America’s largest birds, Brown Pelicans have bones that are especially long and mostly hollow so they can fly hundreds of miles during migration and also plummet-dive from the air to surprise fish. The white downy breast feathers sought out for the powder puffs would have come primarily from the juvenile and fledgling pelicans. 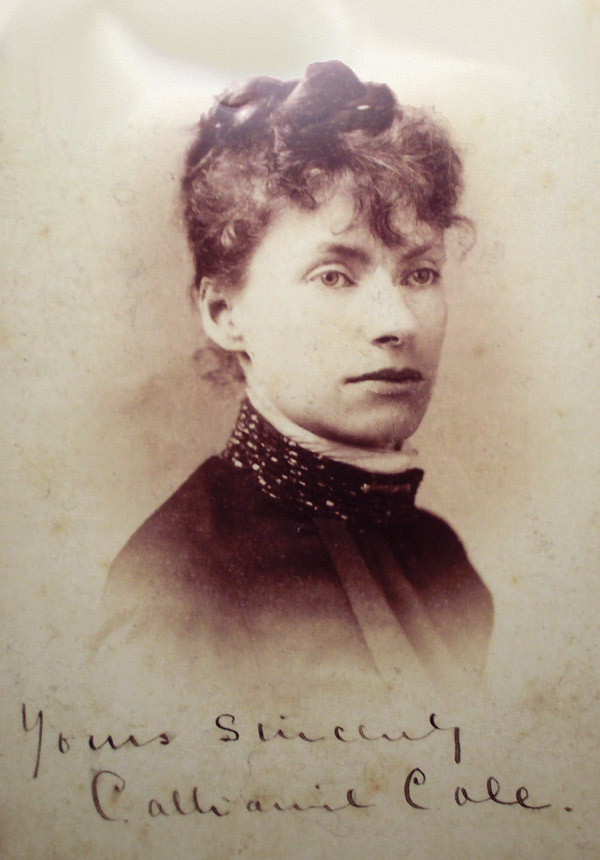 Thirdly, Field’s description is a small piece of environmental history, even if she doesn’t give exact numbers. International protests in the early 1900s resulted in laws against killing birds for fashion and protecting most migratory birds. In 1919, some 50,000 Brown Pelicans nested in Louisiana, but by the 1960s not a single nest could be found in the state. While hunting the birds had become illegal, the chemicals used for agriculture, such as DDT, likely caused the nearly complete elimination of the Brown Pelican from the Gulf Coast.

Today, Brown Pelicans are again thriving in this region and have been removed from the endangered species list. A success story, to be sure, but now their coastal habitat is threatened in new ways. Last Island, about thirty miles long when Field visited, is essentially gone. Like most of coastal Louisiana, it has been over-washed into a fraction of what it was—only a few small, low islets—due to a range of man-made and natural factors. Making things worse, the BP oil spill in 2010 killed thousands of pelicans and coated the shores of dozens of barrier islands, including the islets that were once Last Island, where pelicans still nest.

During her visit to Last Island, Martha Field body-surfed on the beach, fished for redfish, collected shells, and hiked around with the bird-hunting family to observe and describe their techniques. One night as she lay on the deck to sleep, she felt haunted by the loss of human life from the Hurricane of 1856: “Once in a while a belated pelican swept by, beating the air with heavy, hurried wings, or a tern screamed like a shrill sea witch…it was long before I could sleep, just for listening to the moaning surf, to the growling of far-off thunder, but at last a sleep came, and when I awoke it was four in the morning.” She crawled out from the mosquito net, sipped on a mug of coffee, and she and the schooner’s crew set sail and cruised off to Timbalier Island.

In the next issue, I’ll tell you what Field found at Timbalier, which is perhaps just as iconic for coastal Louisiana as the pelican.