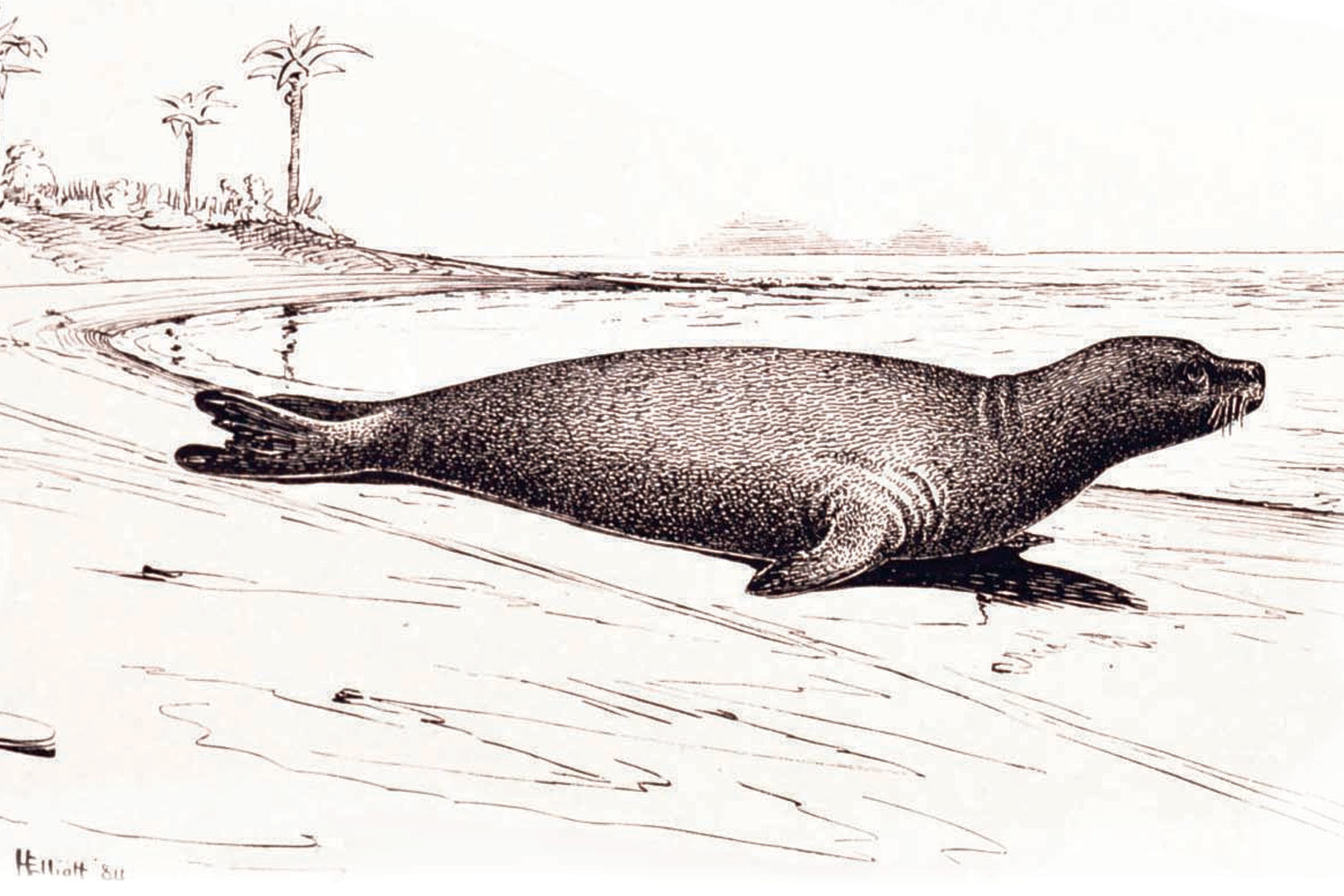 Scientific Name:
Monachus Tropicalus
Lifespan:
About 20 years
Believed to be extinct since 1960s. Caribbean monk seals were brownish or grayish in color with the underside lighter than the dorsal region. The skin color of the adults used to be darker than the younger ones. Few specimens had a greenish appearance because of algae growing on their pelage.

During his 2nd voyage to the Caribbean aboard the Niña in 1494, Christopher Columbus visited an island just south of what is today the Dominican Republic. Columbus’s son wrote that his father “anchored at a small island that he named Alta Vela [Tall Sail]; and having lost sight of the other two ships, he sent some men ashore to climb to the top of this very high island, from which one could see a great distance…As they were leaving that island they killed eight sea wolves which were sleeping in the sand…the animals are unaccustomed to men.”

Columbus’s “sea wolf” was actually a marine mammal—a seal. This is the earliest European description of an animal that is now extinct, the Caribbean monk seal (Monachus tropicalis). That Columbus’s crew called this animal a “sea wolf” was probably not due to its ferocity but in part in the translation from Spanish to English. In Spanish, seals and sea lions are sometimes called “lobos marinos,” meaning “wolves of the sea,” which likely traces to the grey color of their fur as well as the howls that these marine mammals make when hanging out on a beach or set of rocks, particularly if they are beside cliffs where the sounds echo. 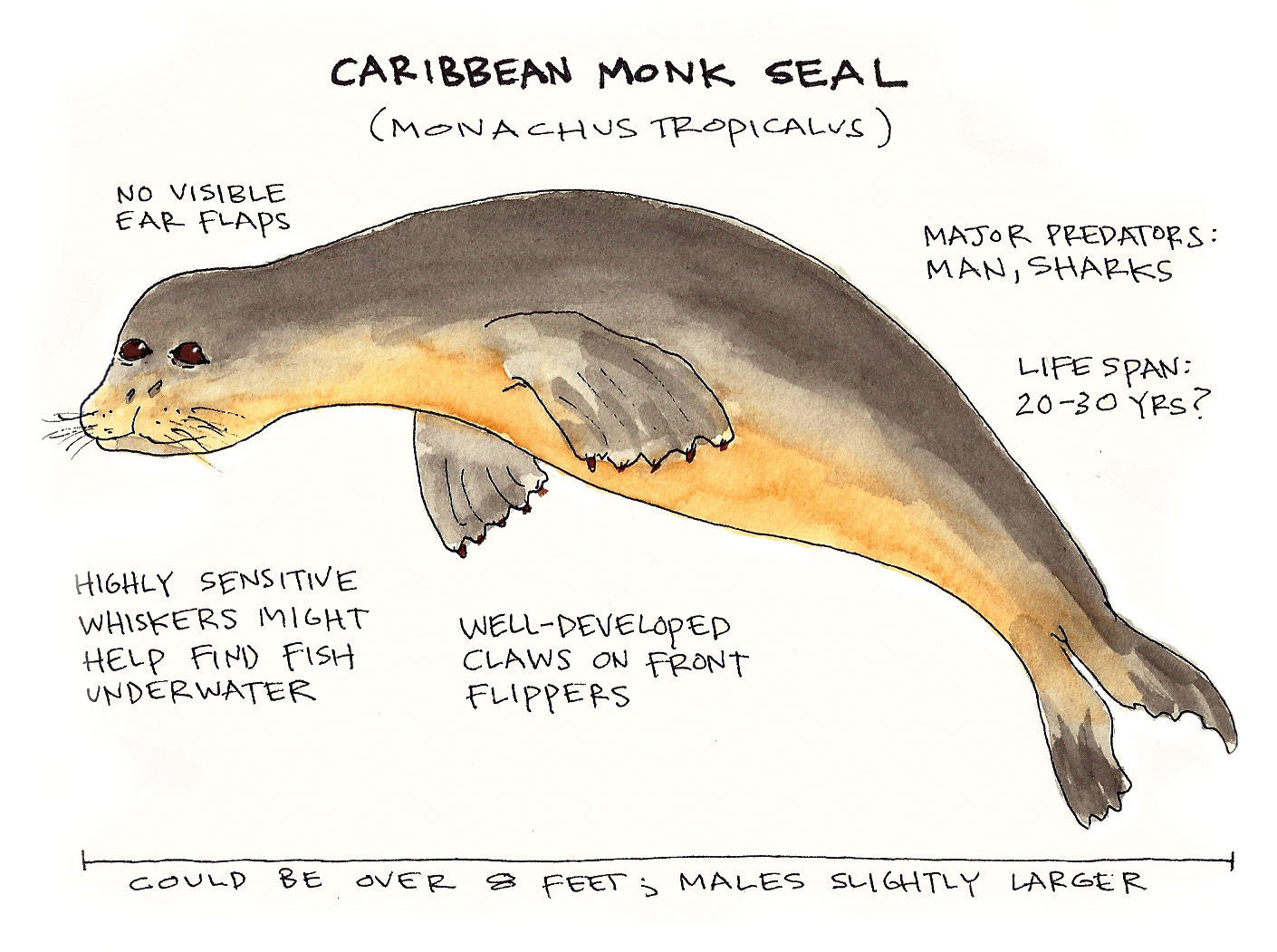 The Caribbean monk seal was the only indigenous seal or sea lion in the Caribbean and the Gulf of Mexico. In recent decades, sightings of manatees and the occasional stray seal or sea lion from another part of the world have given people hope that a few of the monk seals might remain in the area, but the last confirmed sighting of a Caribbean monk seal was back in 1952 in the western Caribbean Sea. In 2008 the US National Marine Fisheries Service, after a thorough study and review, concluded that the species is definitely extinct. The Caribbean monk seal’s close relatives are also in danger: the Mediterranean monk seal has only about 600 animals left on the planet; the third member of the monk seal family, the Hawaiian, is critically endangered too, with fewer than about 1,500 individuals left on Earth.

What we know about the Caribbean monk seal comes from these living relatives, a few preserved specimens, fossil records, evidence from native peoples, and the written accounts from mariners and fishermen who encountered them on their voyages. Caribbean monk seals looked a lot like the seals we recognize today with a smooth body, flippers, and a short tail. These were large seals—some were more than four hundred pounds. They had big reddish-brown eyes to help see underwater and probably would have eaten fish, lobsters, crabs, and squid—all abundant in the Caribbean Sea.

When Columbus and the early explorers came upon Caribbean monk seals, the animals were passive and unafraid. Hunting and general disturbances to their island rookeries by humans over a few hundred years dwindled their population until just those few sightings were left, and by then their extinction was imminent. Sailors hunted seals for food, as did Columbus’s crew, but more often for their blubber, which was used for lamp oil, lubrication, and even as a coating for the bottom of boats. Swiss naturalist Konrad Gesner wrote an unlikely account of how 16th-century sailors used the seals’ pelts: “Its hair is reputed to be of such a wondrous nature that the skins or pelts are worn by mariners. When in thunderstorms, tempests and other inclement weather is nigh, the hair shall rise and bristle, but when it turns still and mild, it shall lay down smoothly.”

In 1707 Sir Hans Sloane wrote: “The Bahama Islands are filled with Seals; sometimes Fishers will catch one hundred in a night. They try or melt them, and bring off their Oil for Lamps to the Island.” Early explorers and mapmakers named a variety of places across the region in a way that says they saw these animals, names such as Lobos Cay in Cuba, Cayo Lobo Marino in Nicaragua, and Seal Keys in the Bahamas. Into the early 1800s, sailors and naturalists described monk seals throughout the Caribbean, including the Yucatan Peninsula and Venezuela. By the 1890s, however, four hundred years after Columbus’s arrival, the Caribbean monk seal was considered very rare. The last Caribbean monk seal sighted in American waters was killed by a fisherman in 1922 near Key West, Florida.

The Hawaiian monk seal is a close relative of the now-extinct Caribbean monk seal (above, sketched by Henry W. Elliott in the late 1800s).