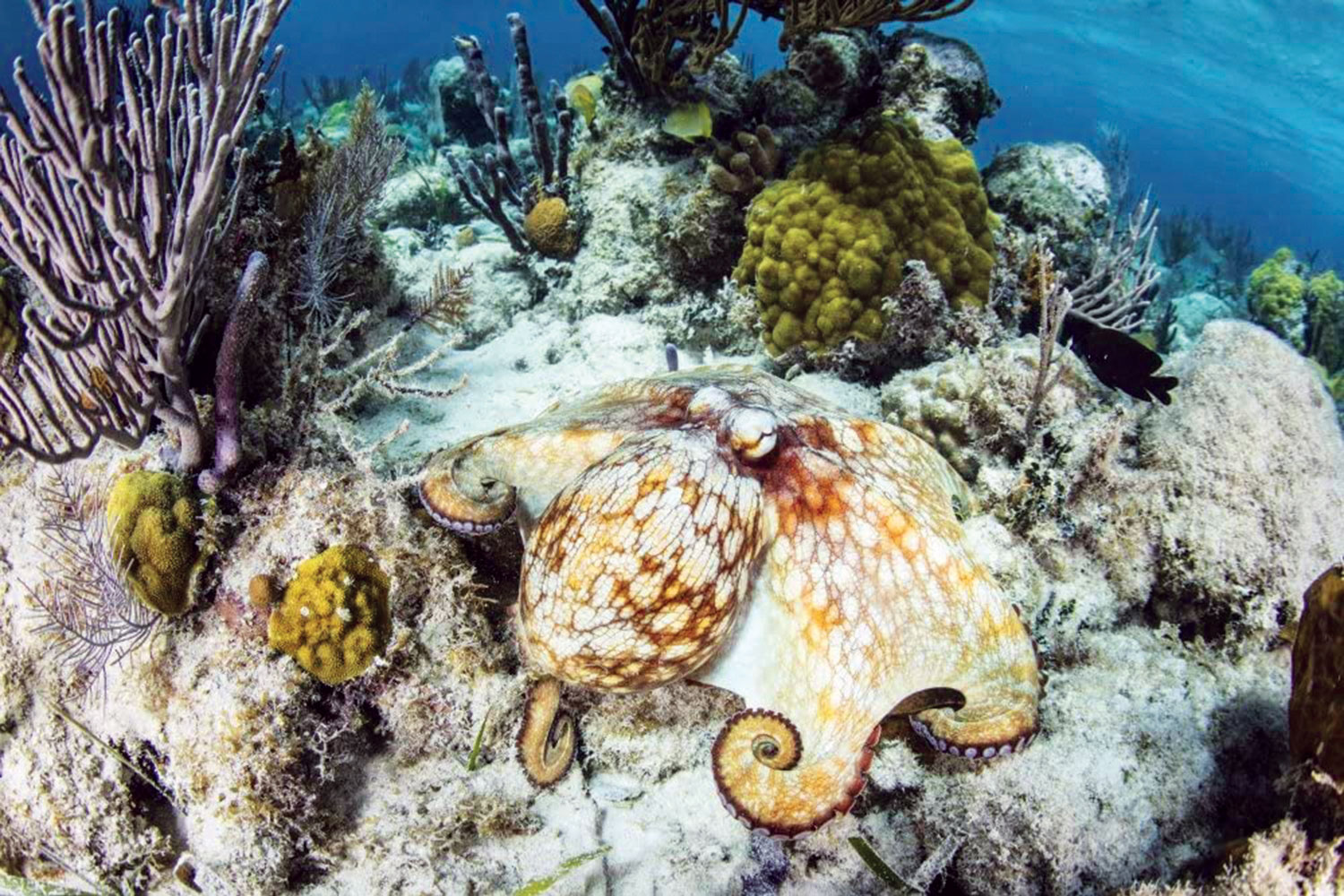 Scientific Name:
Octopus Briareus
Lifespan:
generally 1 -1.5 years
The Caribbean reef octopus is a coral reef marine animal. It has eight long arms that vary in length and diameter. The mantle is large and chunky in comparison. 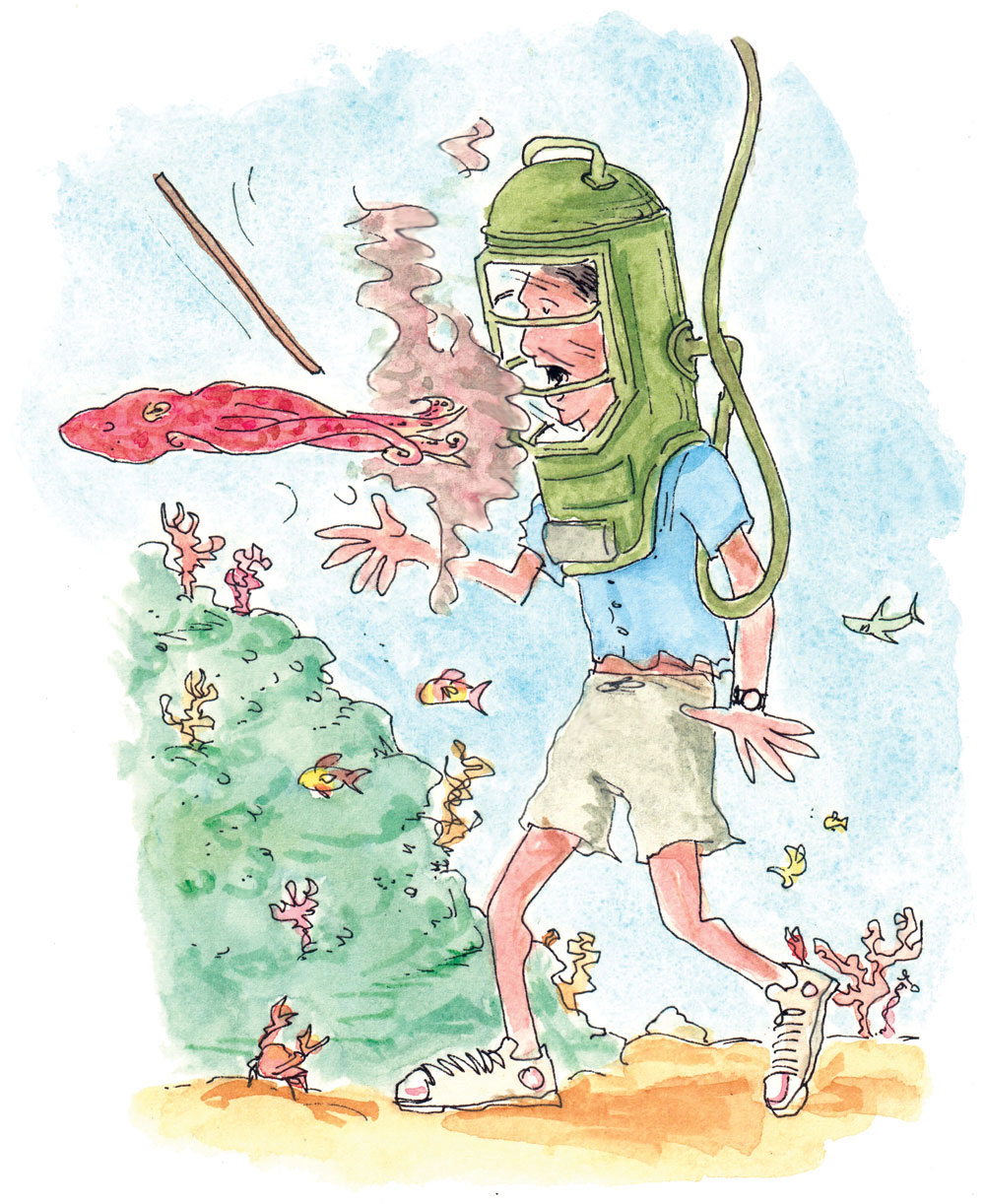 Gilbert C. Klingel grew up around the Chesapeake Bay, dreaming of becoming a naturalist adventurer. His first scientific expedition took him to Haiti in 1928 to find and study rare lizards, the results of which he shared with the American Museum of Natural History in New York City. The museum, along with the Natural History Society of Maryland, then funded the building of a wooden replica of the Spray, the boat in which Joshua Slocum had been the first to sail alone around the world. Klingel and a friend were to sail to the Caribbean to explore the natural world of its tropical waters and islands.

The pair set off in the new boat, named Basilisk (after the lizard that can skitter over the surface of the water), but they didn’t get far. They shipwrecked in rough weather on the reef off Great Inagua at the southern end of the Bahamas. Undaunted, they set up camp and recorded all they could, both on the island and underwater around its reefs. Klingel went back to Great Inagua several years later to further study the natural history of the island, and in 1940 he published his first book, Inagua. 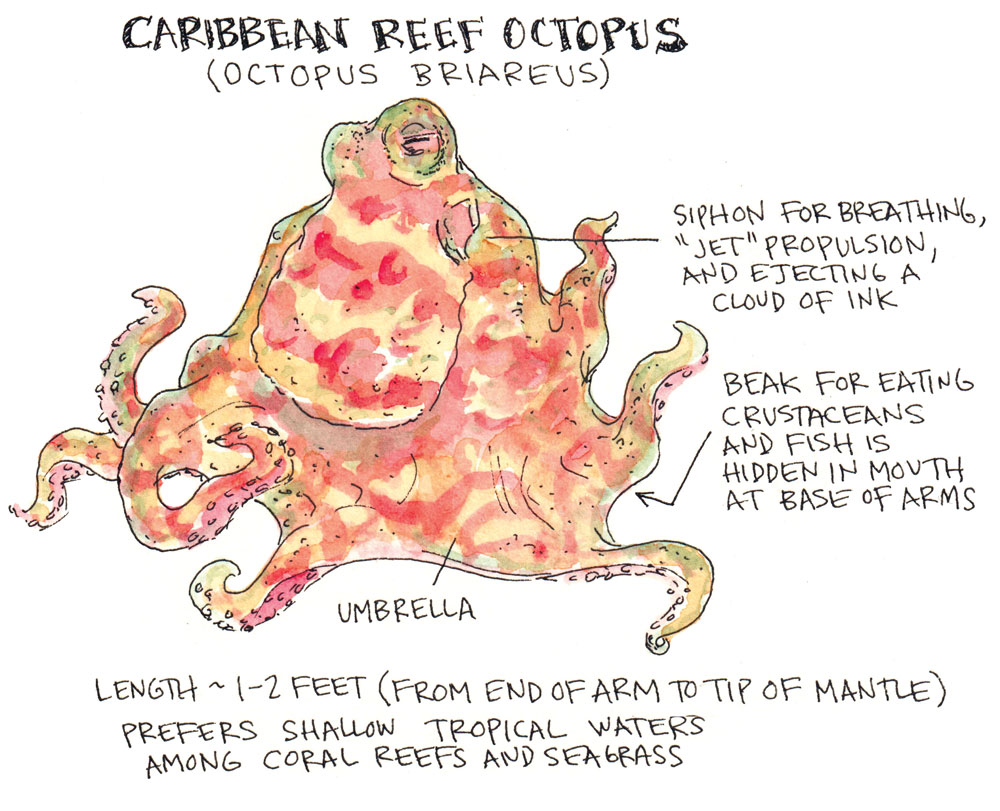 Inagua, or The Ocean Island, is a treasure for its history of marine biology, especially with the chapter titled “In Defense of the Octopuses.” Diving and underwater photography were still in their infancy at the time, yet Klingel was eager to explore underwater. Using a diving helmet, he was walking one day on the seafloor just off Great Inagua, and he walked up an underwater ravine. Klingel was about to put his hand on what he thought was a yellow rock, but then, by chance, he noticed eye slits in the “rock.” He watched it ooze slowly away, like hot wax. Though the octopus’s head, Klingel explained, was about as big as a football, it slithered down into a crack in the reef that was no more than four inches wide. As the octopus slithered away, it changed color from pebbly yellow to red, then to white. 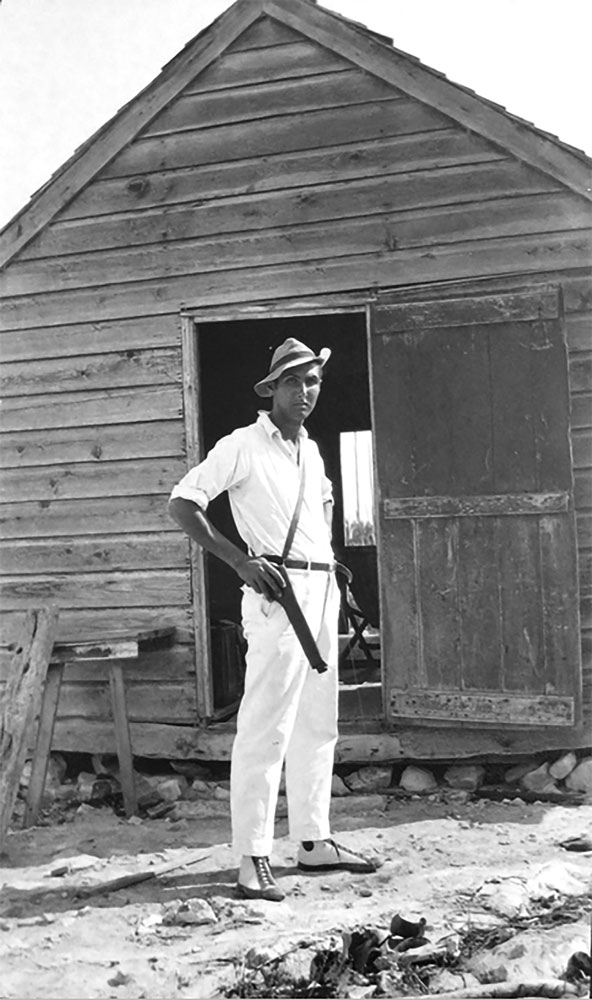 Gilbert Klingel on Inagua Island, with probably his fish-knife, in front of their field station in 1931.

Klingel went on to spend many days underwater observing the octopuses of the reef, including the large one that he first mistook for a rock. There are some 300 species of octopus that live in a range of marine habitats all over the world, including the few that live in the reefs around the Bahamas. Klingel’s octopus that day might have been a large individual of the Caribbean Reef Octopus (Octopus briareus), local to this part of the world. He estimated its total arm span as five feet from tip to tip. In his “Defense of the Octopuses,” Klingel wrote of their extraordinary ability to camouflage, in which they not only can change color, but even their shape and skin texture. Klingel watched the octopuses’ clever strategies to capture crabs, and he observed how they stored uneaten shellfish just outside their dens within the reef.

At one point, when Klingel was observing the large octopus, he decided to see what would happen if he gave it a little poke with a stick, to see how the skin color might change in response. All at once, the octopus grabbed the stick with its arms and let it go, sending the stick floating to the surface, while at the same time squirting ink into the water before it jet-propelled itself away. Klingel smelled a “fishy musk” that seeped into his dive helmet. He was surprised to see the color of the ink was not black, but more a dark purple that faded into a “somber shade of azure.”

Despite the inking, Klingel wrote that these animals, thanks to stories of monstrous giant octopuses and squids attacking fishermen written by the likes of Victor Hugo and Jules Verne, have “been the unknowing victims of a large and very unfair amount of propaganda, and have long suffered under the stigma of being considered horrible and exceedingly repulsive.” He thought instead that they were “among the most wonderful of all earth’s creatures.”

In this way, Gilbert Klingel was far ahead of his time regarding his deep respect for these animals; “In Defense of the Octopuses” was written several decades before the bestselling book Soul of an Octopus (2015) by Sy Montgomery, the recent documentary My Octopus Teacher (2019, produced by Craig Foster), and the poem “Octopus Kingdom” (2019) by Marilyn Nelson. Klingel, too, marveled at the intelligence of octopuses, which are “only” invertebrates, yet these advanced cephalopods use tools, appear to play, exhibit intense curiosity, and have the ability to learn in ways equivalent to mammals, maybe even at the level of some of the primates. Klingel wrote: “There is a reason to believe that they are the most keen-witted creatures in the ocean.” 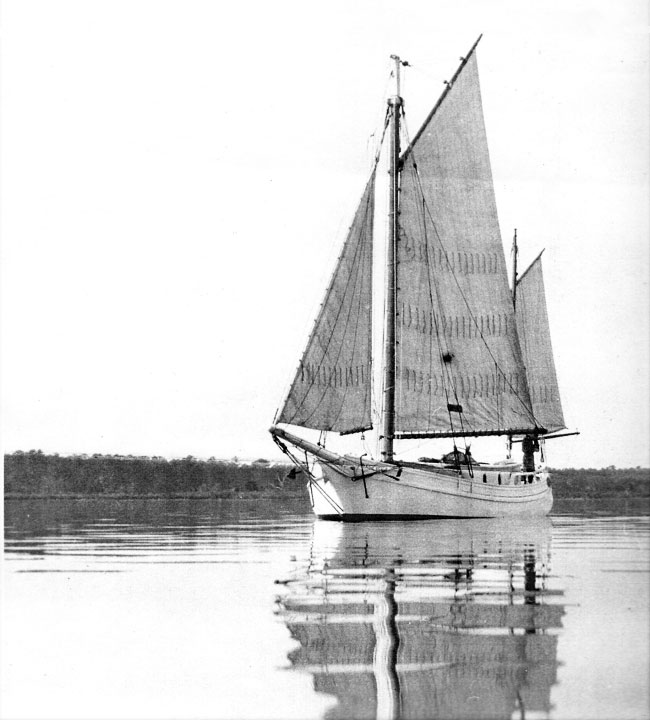 Gilbert Klingel’s own curiosities were too far-ranging, however, to devote his career entirely to octopus public relations. He went on to teach himself marine engineering and welding, and he invented an early submersible—called the “Aquascope”—that lowered to the bottom of the Chesapeake Bay, in which his thirteen-year-old daughter Marcy got a chance to dive. Klingel later became a craftsman of custom steel sailboats, built to, well…survive a crash into a reef.

Basilisk was built in Oxford, Maryland, by Alonzo Conley, a well-known shipwright in the region. A 37-foot yawl, it was a copy of Joshua Slocum’s Spray. Klingel oversaw its construction and assisted with some of the work. Under his guidance, the interior was expressly fitted for a scientific expedition.

For more “Animals in Sea History,” go to educators.mysticseaport.org. To learn more about Gilbert Klingel and his work in the Chesapeake Bay region, visit the Mathews Maritime Foundation at mathewsmaritime.com.