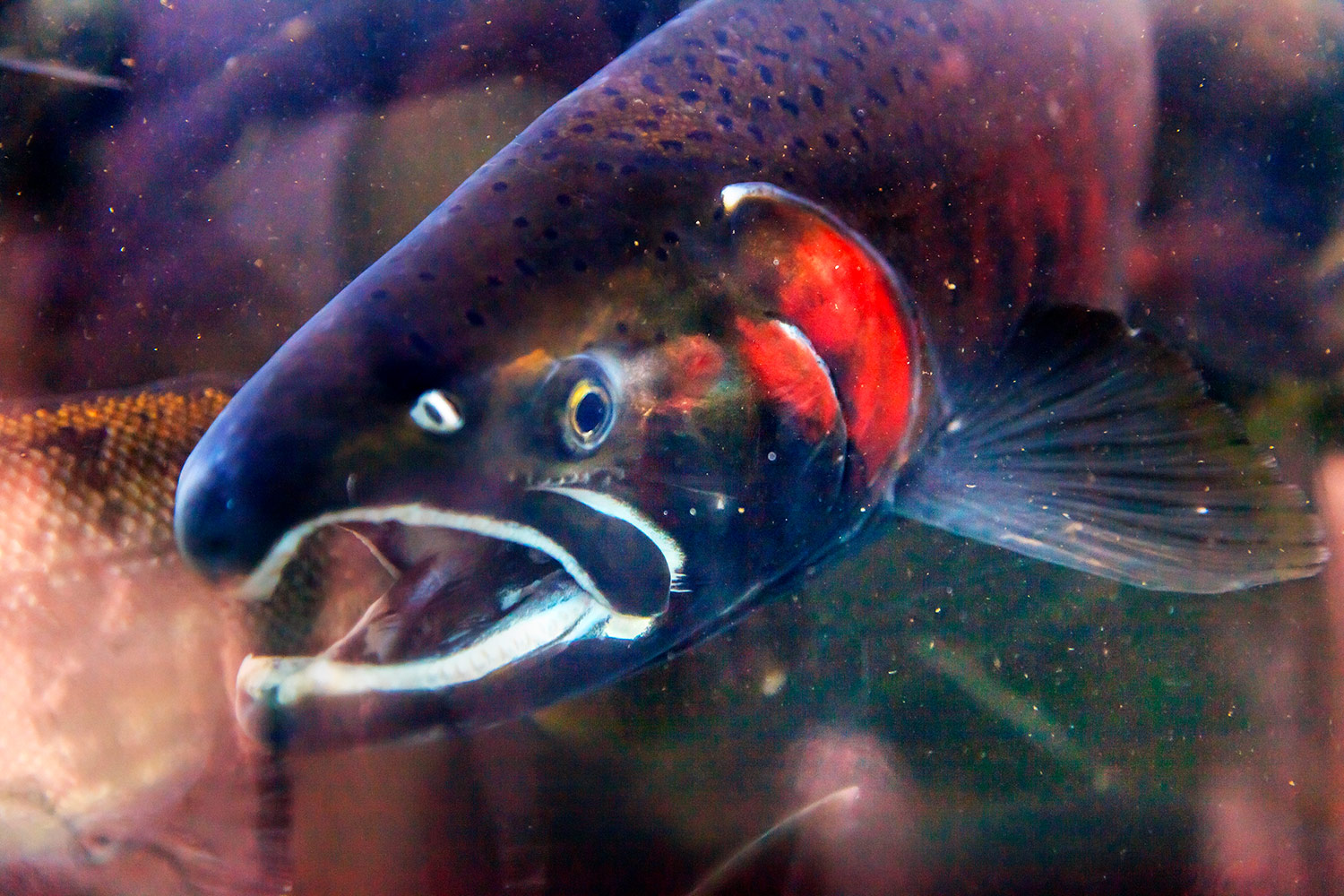 Scientific Name:
Oncorhynchus Tshawytscha
Chinook Salmon commonly grow to about 3 ft. long and up to 40 lbs. There have been reports of 5 ft. and 120 lbs. 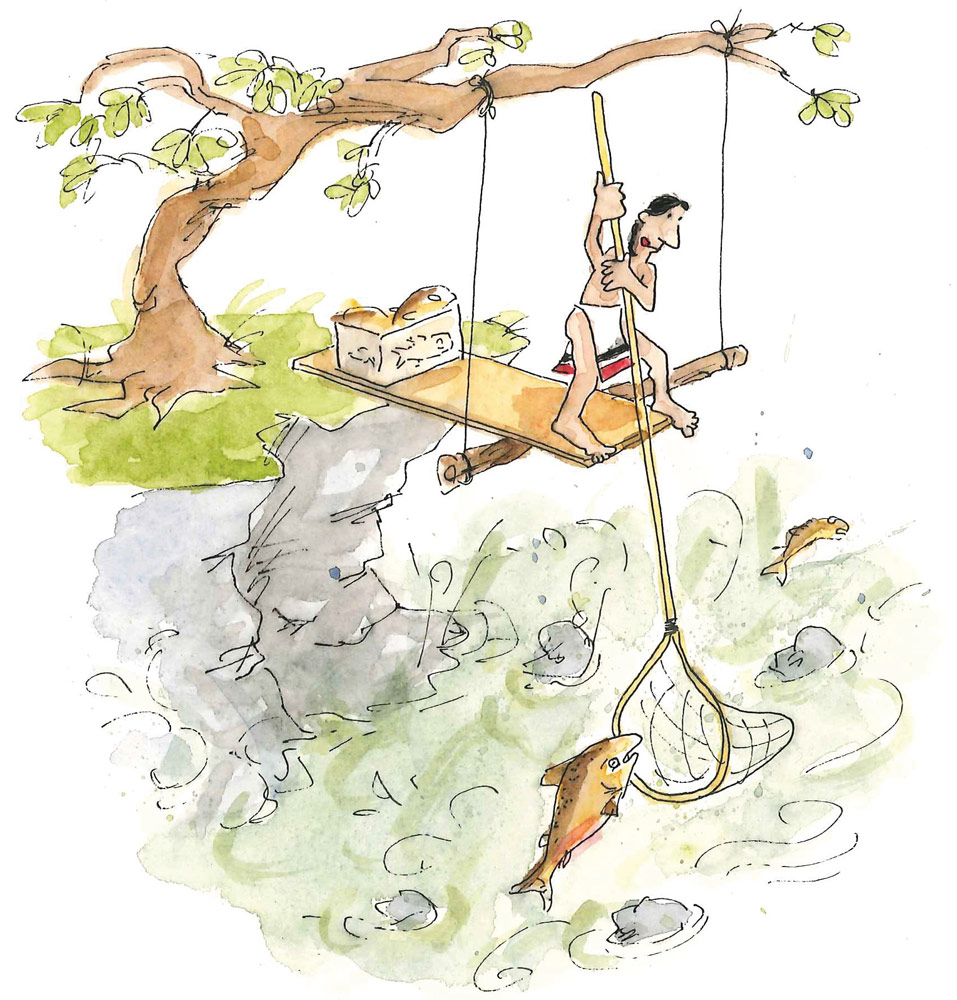 The First Peoples’ legend goes something like this: Coyote came to the region that we now know as the Pacific Northwest. He saw that humans were in need of some help, so he created the mighty Columbia River. He connected this river from the Pacific Ocean to an inland pond where women had been keeping two fish. Coyote declared that these fish would be “the people’s food,” because he knew the river would bring more humans. As the river flowed and the fish began to swim from the pond to the ocean and back again, Coyote taught the people how to catch and cook these animals to feed themselves.

Tens of thousands of tribal people once lived beside the mouth of the lower Columbia River, surviving largely on salmon. These were the tribes of Chinook people, whose ancestors lived for at least 9,000 years before the Russian, Spanish, and British explorers arrived in the 1700s. When Meriwether Lewis and William Clark traveled to the area from the interior in 1805, they met the Chinook people and ate salmon. Lewis and Clark visited a vast native marketplace by the river that centered on the trade of salmon, and they watched the Chinook festival to celebrate the first catch of the season. The First Peoples often preserved the fish by drying it and pounding it into a powder and pressing this into a loaf, a type of pemmican. “Thus preserved,” Clark wrote, “those fish may be kept sound and sweet several years.”
A few varieties of salmon still live in the Columbia River today. 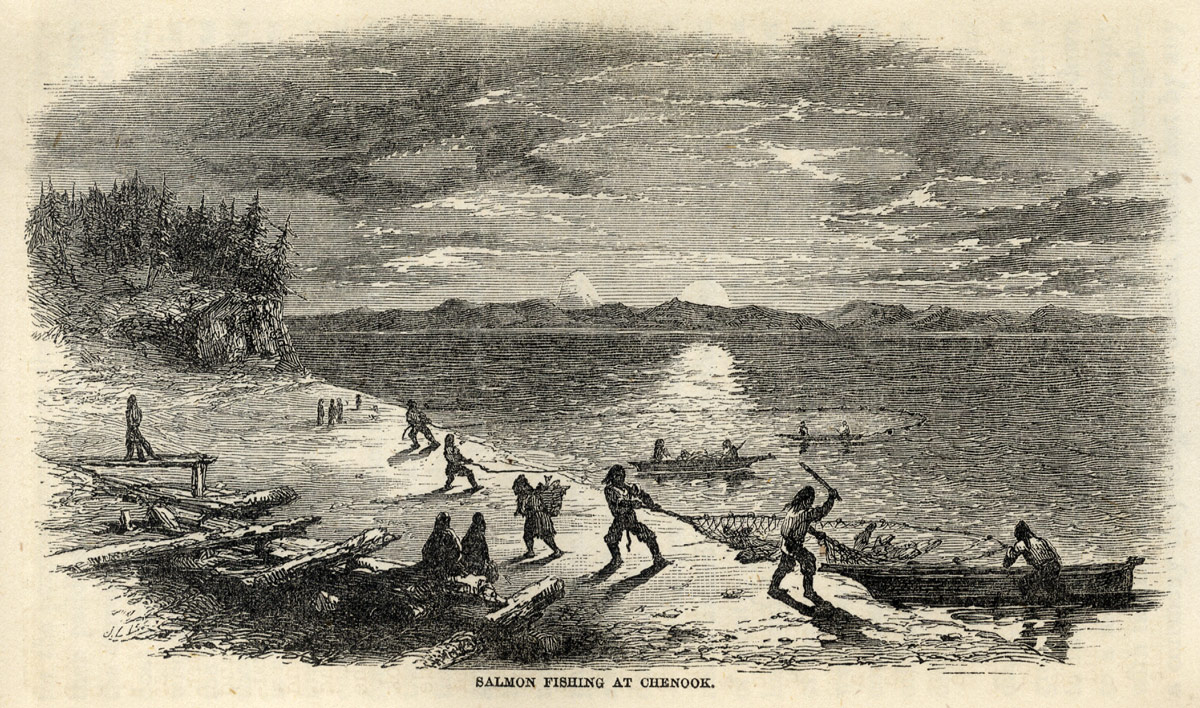 The Chinook salmon that Lewis and Clark saw is by far the largest and certainly the most plentiful. It is also known as King Salmon. Like the other species, Chinook salmon, as the Coyote legend suggests, are anadramous—meaning they spend their adult lives in the ocean but migrate upriver to freshwater ponds or creeks to spawn. Chinook Salmon adults die after laying or fertilizing their eggs. These eggs hatch into small “fry” that grow in protected fresh waters until of an age and size, a “smolt,” where they can then travel downriver, out the mouth of the Columbia, and into the Pacific Ocean. They live at sea for several years, some traveling beyond Alaska, until they return to complete the cycle by changing their appearance, then fighting up the river, against currents and rapids to spawn and die in the same place where they were born. Lewis and Clark wrote of the Chinook collecting and drying the salmon eggs, the roe, for “much esteemed” food. 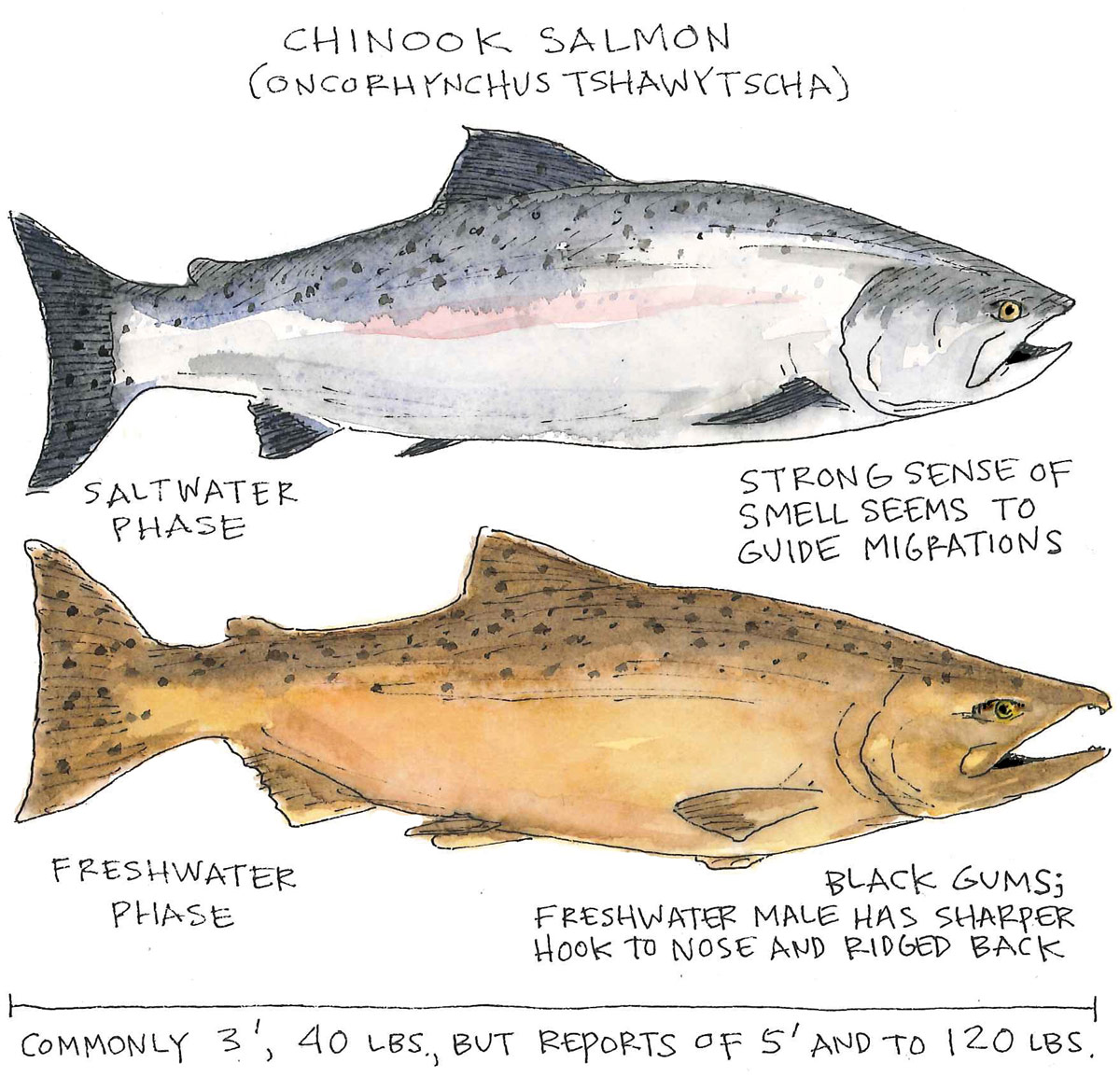 The Chinook peoples caught salmon using a variety of methods. By the mouth of the river, they made long seine nets with twine spun from spruce roots and with stones tied to the bottom edges. In narrower, quiet parts of the river they built intricate weirs, mazes, baskets, and traps. Over rapids they built overhanging stages where men with poles as long as thirty feet reached down to dip-net and spear salmon as the fish leaped past. According to traveler, writer, and artist James Swan in the 1850s, the best-tasting salmon were those that had just entered the Columbia River from the sea. These fish were fat and healthy. They were caught swimming past a small town near the mouth on the Washington side of the river, known today as, well, Chinook.

Several different “runs” of Chinook salmon swim back and forth through the Columbia River mouth and across river entrances throughout the North Pacific. One Chinook run on the Columbia is officially an endangered species, while other runs of Chinook and other salmon are threatened on this river. This is mostly due to a century’s worth of overfishing, dam construction, and polluting of riverside habitat. Salmon, however, particularly the Chinook salmon, remains a powerful symbol of the Pacific Northwest—not only for the fish’s connection to the First Peoples of the region but for what the fish reveal about the environmental health of the rivers. For decades now, several organizations with the investment of literally billions of dollars have been working toward the goal of restoring the traditional runs of Chinook. For some, this is to make Coyote proud.