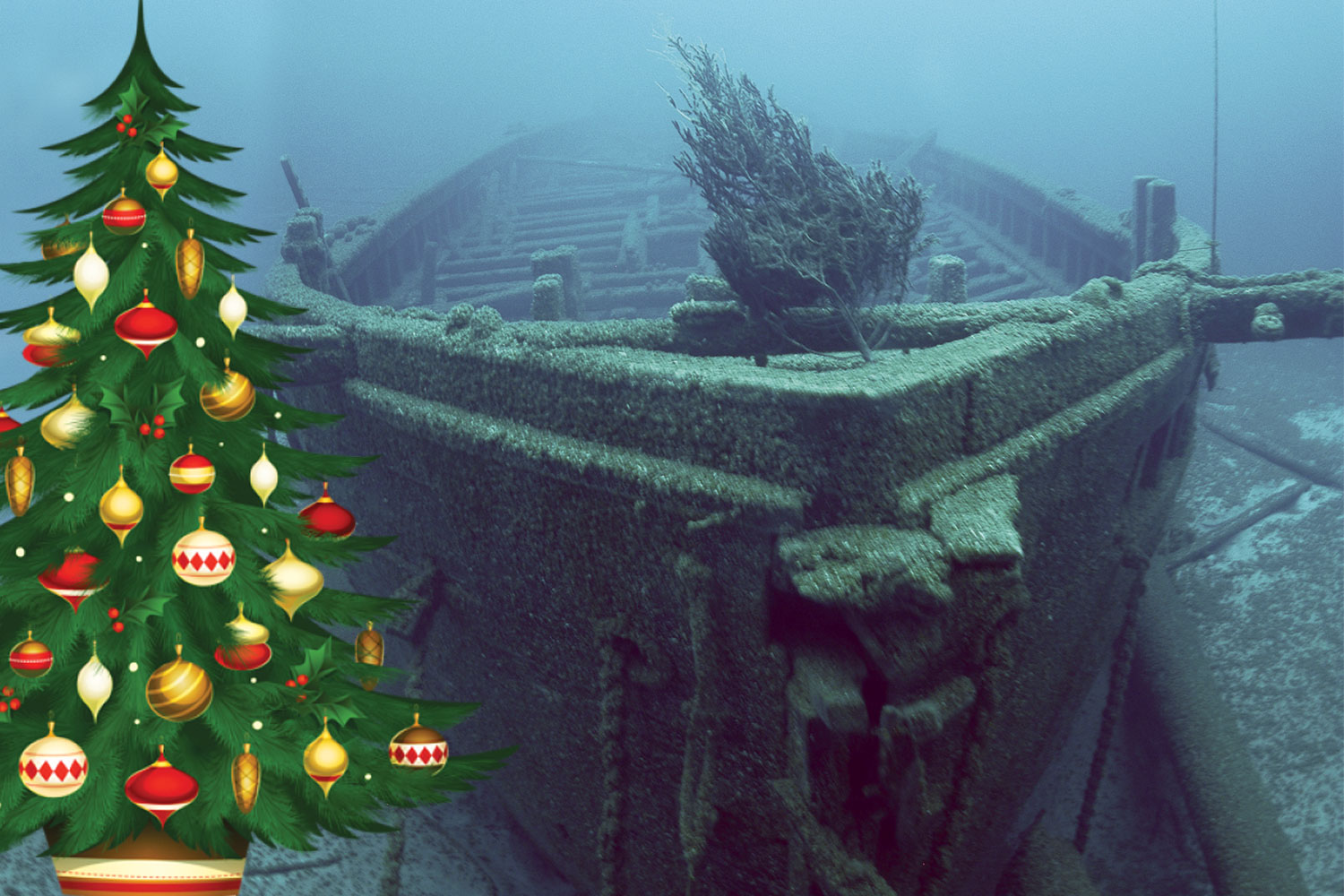 Nine in ten Americans will celebrate Christmas this year in some capacity, and more than 95 million households will put up a Christmas tree.¹ The tradition of hanging boughs of evergreen over doors and windows dates back to pre-Christian times, when ancient peoples believed that they would ward off bad spirits. More and more Americans are buying artificial trees and reusing them year after year, but about 18% of consumers still buy real trees. Some go to cut-it-yourself Christmas tree farms, and others buy them already cut from garden centers and pop-up shops—anywhere vendors can unload truckfuls of cut trees and prop them up to display them for sale.

Christmas trees for sale in a grocery store parking lot, in Hillsboro, Oregon.

In the early 1900s, Chicago and other cities along the shores of the Great Lakes had similar arrangements, but the pop-up shops of this era were onboard sailing ships, which carried thousands of cut trees from northern Michigan and Wisconsin to the city streets to sell to residents there. In 1912, there were an estimated dozen to two dozen schooners engaged in this trade, of which the schooner Rouse Simmons would become the most famous. The 123-foot three-masted schooner carrying a few thousand cut trees sailed into Chicago under the command of Herman Schuenemann. The Christmas tree business was a way for the Schuenemann family to add to their income each year, but Captain Schuenemann had earned a reputation for his kindness and generosity, as he gave trees away to many of Chicago’s residents who couldn’t afford to buy them. Nicknamed “Captain Santa,” Schuenemann and his wife and daughters also made and sold wreaths and garlands along the waterfront in Chicago. 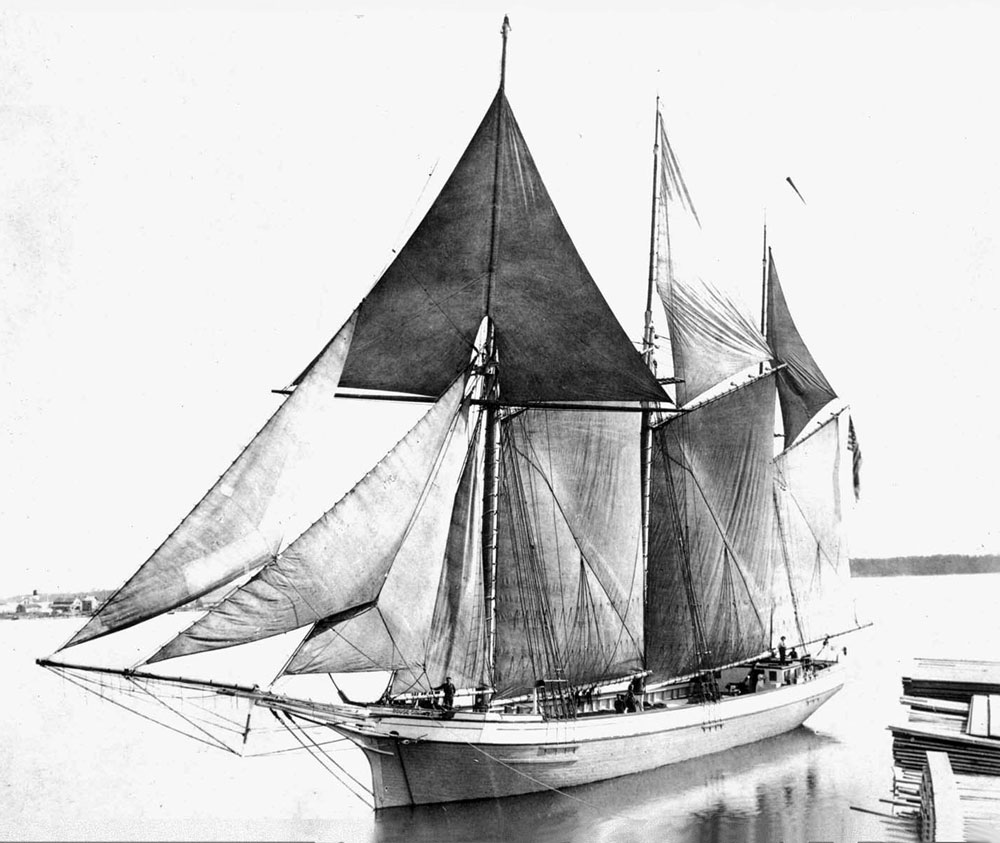 As lovely as this story sounds, sailing a vessel on the Great Lakes in late winter was no easy task, and by this part of the season, most other ships had laid up for the winter months. The Great Lakes freeze over in the winter, and dangerous late autumn gales were always on the minds of shipowners and captains whose vessels were still sailing late in the season. Captain Schuenemann was an experienced ship captain and had been sailing Christmas tree ships to Chicago for almost thirty years. He took the Rouse Simmons up to the northern part of Lake Michigan to pick up a load of trees—estimated at between 3,000 and 5,000—and departed for the trip south, down the length of Lake Michigan to Chicago (nearly 300 miles), on 22 November 1912. 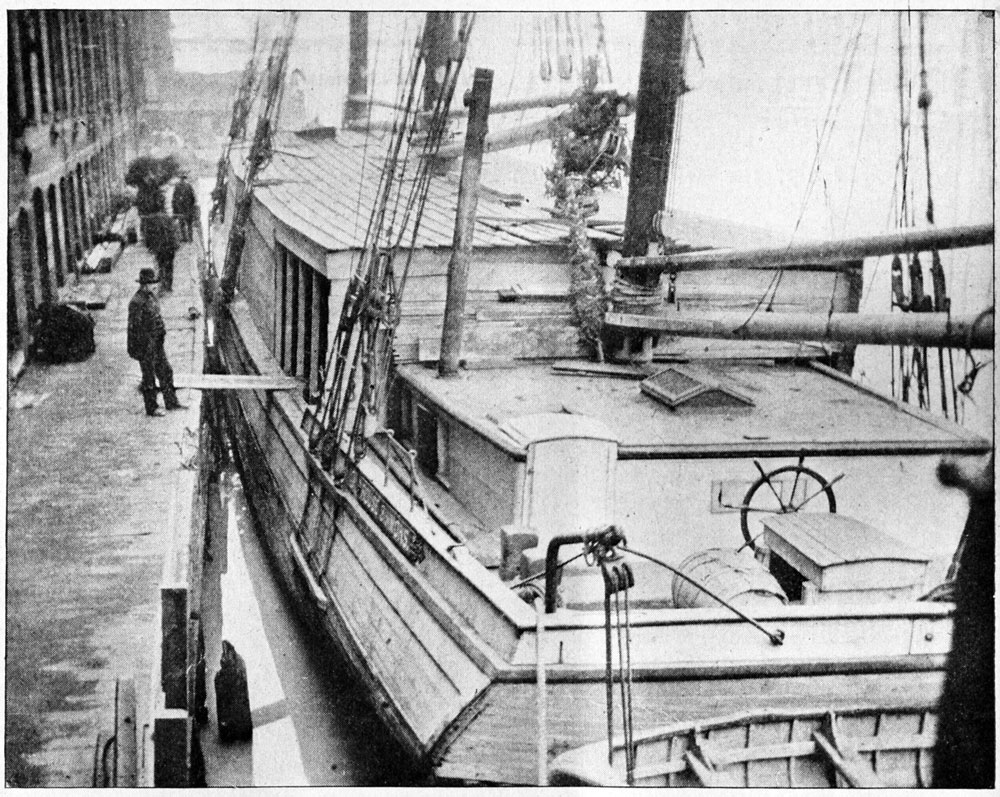 The Rouse Simmons alongside the dock in Chicago. A few unsold trees can be seen by the main mast. Photo: Wisconsin Historical Society.

No one ever heard from Captain Schuenemann after that; all his family knew was that the Rouse Simmons did not arrive when they expected her to, nor in the days that followed. A late autumn gale had kicked up around the same time the Rouse Simmons was making her way down the lake. The day after Schuenemann left for Chicago, a surfman with the US Life-Saving Service at the Kewaunee Life-Saving Station in Wisconsin reported seeing a schooner approximately five miles offshore flying a distress flag. A motor rescue vessel was sent out to her reported location but was unable to reach her in time. The Rouse Simmons had vanished. 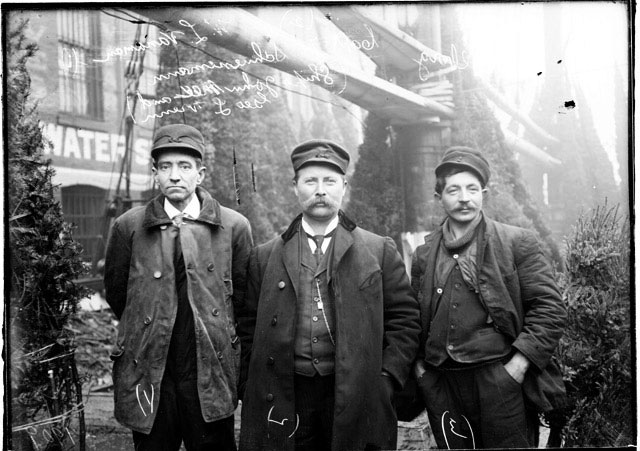 Herman Schuenemann, a.k.a. “Captain Santa” (center), with two members of his crew on the deck of the Rouse Simmons.  Photo: Chicago Historical Society.

Within a few weeks, Christmas trees began washing up on shore along the western  side of the lake. Twelve years after the Rouse Simmons disappeared, a fisherman found Captain Schuenemann’s oilskin wallet in his net when he hauled it up to his boat in Lake Michigan. With that, the evidence of the Rouse Simmons’s fate disappeared, but legends and folk stories live on. That is, until 1971, almost sixty years later, when a Milwaukee scuba diver discovered the shipwreck on the lakebed about twelve miles northeast of Two Rivers, Wisconsin, in 165 feet of water.

Since 2000, an organization called Chicago’s Christmas Ship, a group formed by local mariners who collaborate with the US Coast Guard, has collected more than a thousand Christmas trees each year and brought them to Navy Pier in Chicago aboard the USCG icebreaker Mackinaw. From there, in the spirit of Captain Santa, volunteers distribute the trees to disadvantaged families in the area.

¹ Pew Research Survey; and a Nielsen/Harris Poll on behalf of the National Christmas Tree Association, 2019. 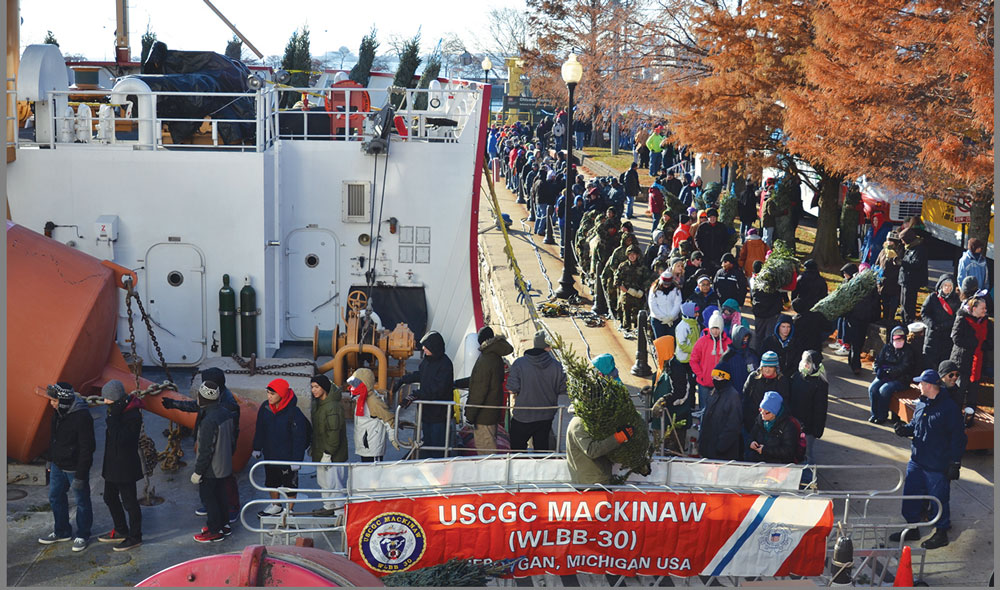 The Rest of the Story: What Maritime Archaeology Can Tell Us

In October of 1971, Gordon Bellrichard was out on Lake Michigan using sonar to survey the lakebed, looking for the remains of a steamship lost in a storm in 1877. Local fishermen had told him of an area of the lake where their nets kept getting snagged on something on the bottom, near Two Rivers, Wisconsin. Sure enough, the sonar produced a contact that looked promising; he put on his dive gear and went down to check it out. There, in 165 feet of water, rested a well-preserved shipwreck, sitting upright on the bottom. Bellrichard had not found a steamship, however. Instead, he had discovered the remains of the Rouse Simmons, the famous Christmas tree ship that had gone down in a late November gale in 1912. 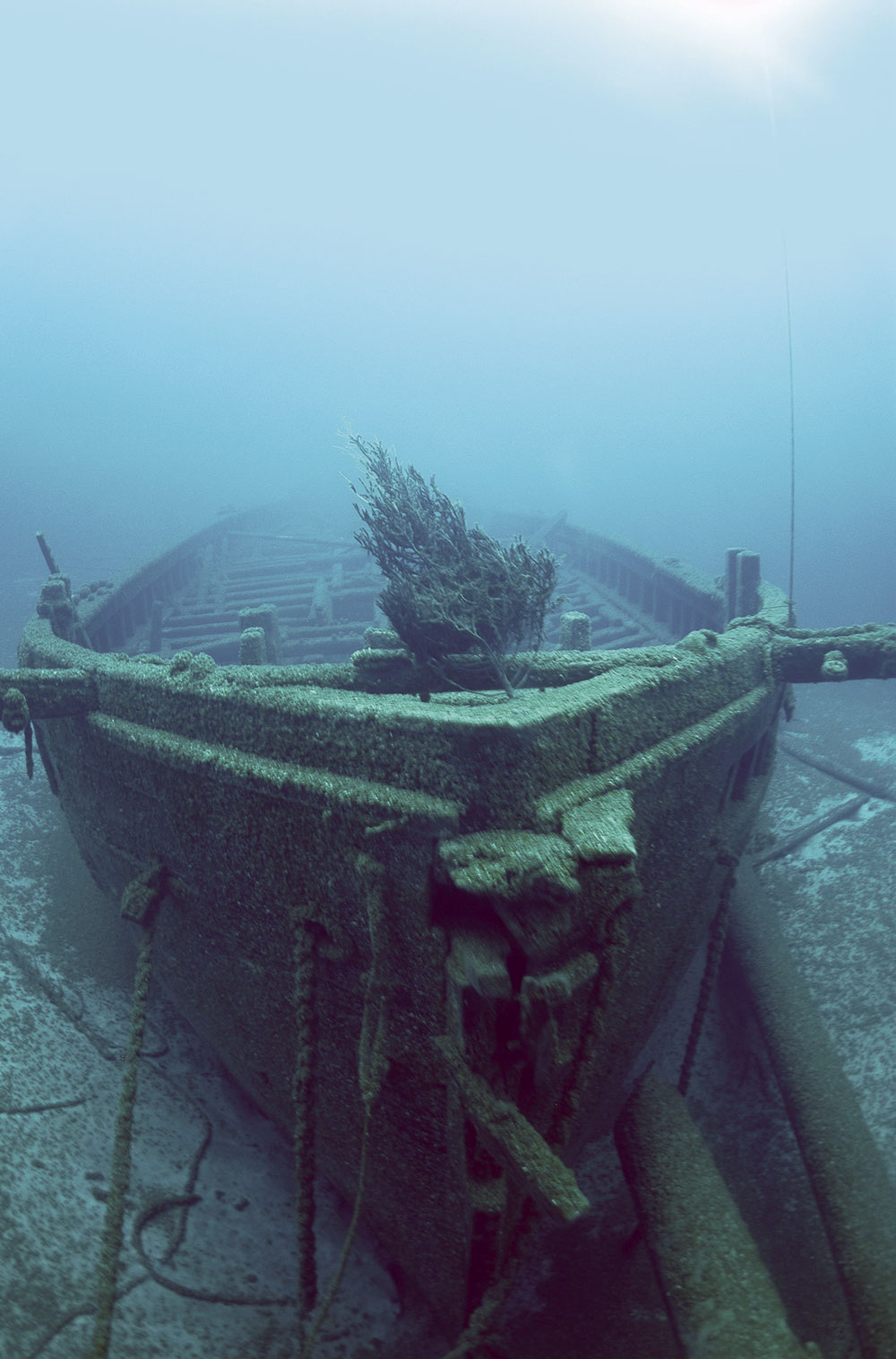 The Rouse Simmons wreck site on the bottom of Lake Michigan. Local divers place an evergreen tree on the bow each fall in honor of her legacy as a Christmas tree ship. Photo: Wisconsin Historical Society.

When the Rouse Simmons was lost, all that was found were some Christmas trees that washed up on shore over the next few weeks, and remarkably, the captain’s wallet that came up in a fisherman’s net years later. Other than that, no one knows exactly what happened and why the schooner sank.

That’s where maritime archaeologists can help. In the years since Gordon Bellrichard found the wreck, the site has been properly documented by Wisconsin state archaeologists, and they have learned a lot about what must have happened by studying the Rouse Simmons’s remains on the bottom of Lake Michigan. Records about the ship tell the story of her construction and 44 years on the Great Lakes, and archaeologists help tell the story of what happened when and after she went down.

Maritime archaeologists document shipwrecks sites in situ, meaning “in place” —without moving or disturbing the remains. This work is usually done underwater, with archaeologists trained in scuba diving taking measurements and making scaled drawings of the wreck site exactly as it lies on the bottom. Depending on the visibility, photos and video can supplement their documentation.

The evidence found at the Rouse Simmons site dispels some of the myths surrounding her sinking and reveals a few things about what must have been happening onboard as the schooner began to founder. For example, the shipwreck is lying on the lakebed with her bow pointing to the northwest towards shore, not south, in the direction she would have been sailing. Her anchor gear—anchor, chain, windlass, and tools—were found on deck at the bow, ready to deploy, and her anchor was found 170 feet north of the wreck site. “Given the amount of chain on the vessel, the depth of water and the intensity of the wind, it was impossible for the Rouse Simmons to safely anchor out in the lake. Likely… something had gone seriously wrong aboard the vessel, and her crew had deployed the port anchor to hold the Rouse Simmons into the wind. Soon after making this decision, however, large waves sent the Rouse Simmons and her crew to the bottom of Lake Michigan… The weight of the anchors and the chain piled on the deck contributed to the force with which the vessel struck the bottom. As the vessel hit bow-first, causing a ten-foot deep divot in the sandy bottom, the majority of her rigging was flung forward of the vessel where it lies on the lake bed, raking the chainplates forward, dislodging the fore and main masts and snapping the mizzen mast.” ¹ Other details confirm the reports that the ship was overloaded with thousands of Christmas trees, both lashed on deck and stored in the hold down below, and that the deck plank fastenings were deteriorated and weakened with age.

You can see more photos of the Rouse Simmons shipwreck, and learn more about the ship and other shipwrecks in Wisconsin’s waters, at the Wisconsin Shipwrecks website produced by the Wisconsin Historical Society and University of Wisconsin Sea Grant Institute: wisconsinshipwrecks.org.