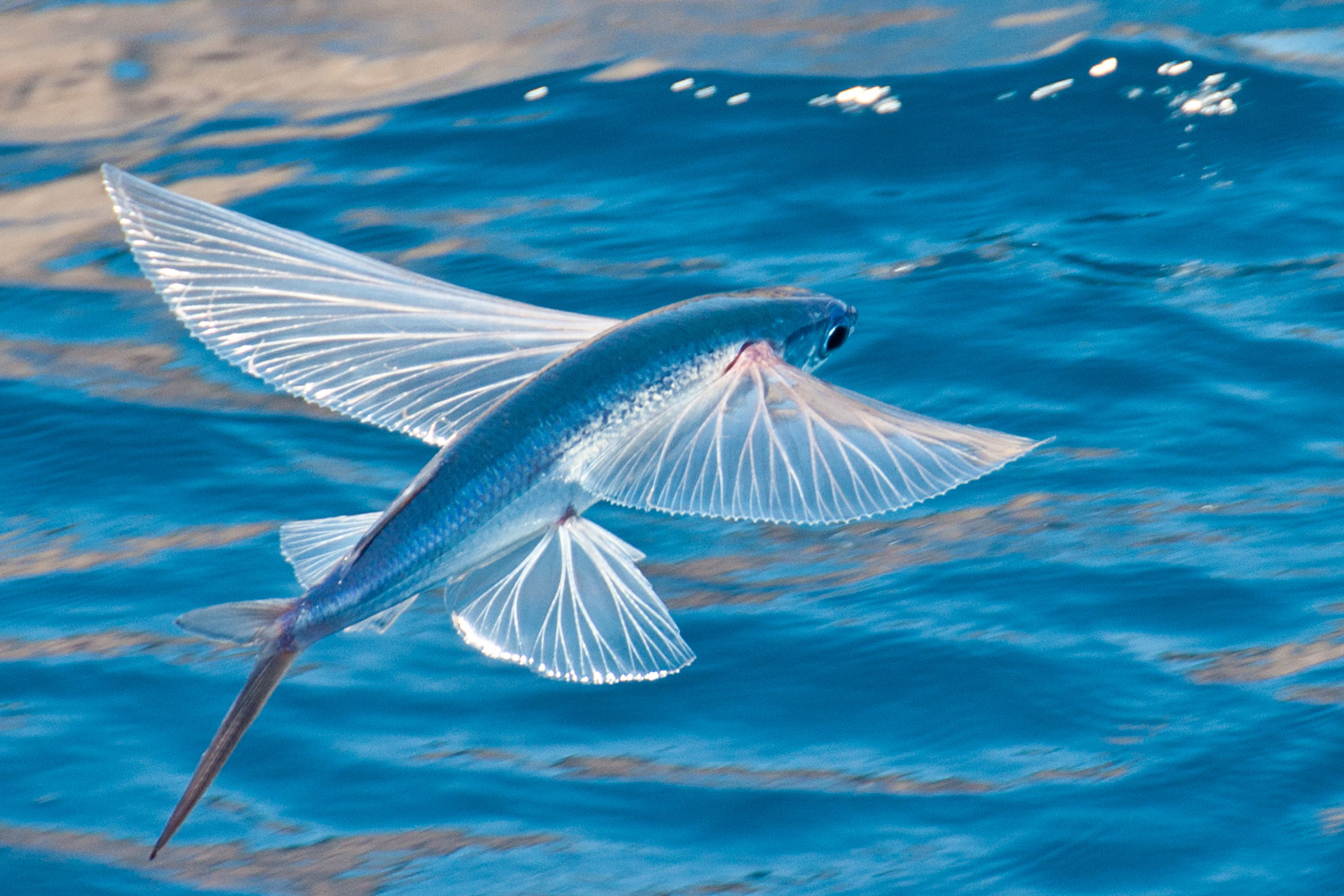 During his voyage across the Atlantic from London to Philadelphia in 1726, Benjamin Franklin made observations about a peculiar type of fish in his journals.

“They generally fly in flocks, four or five, or perhaps a dozen together, and a dolphin[fish] is seldom caught without one or more in his belly.” He recounted finding one on board one morning: “His back and sides of a darkish blue, his belly white, and his skin very thick. His wings are of a finny substance, about a span long, reaching, when close to his body, from an inch below his gills to an inch above his tail.” 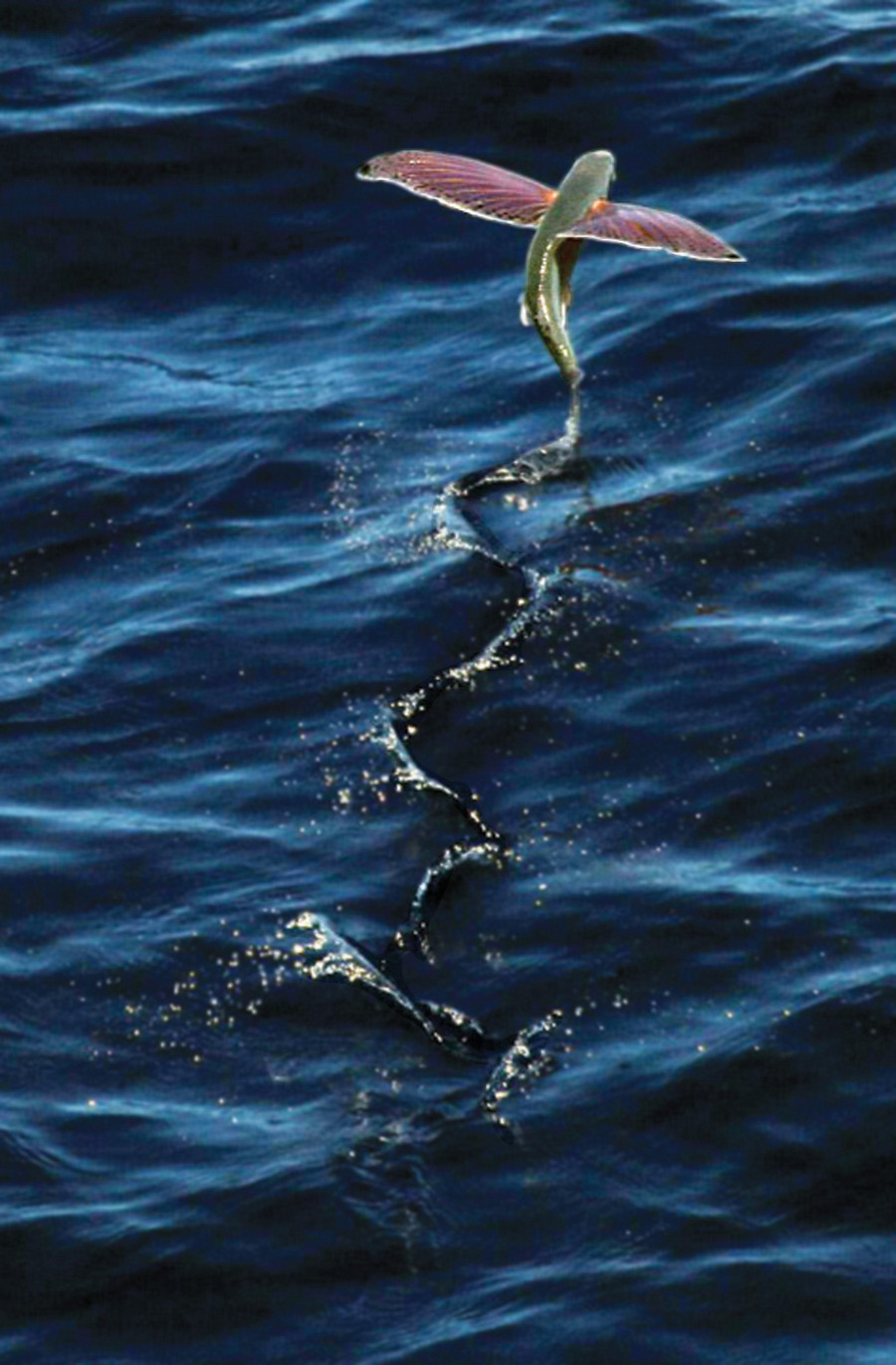 Fish in flocks? Did Franklin really see a fish that could fly?

Countless sailors in history and modern times have observed these extraordinary creatures that use their wing-like pectoral fins to escape dolphin fish (a.k.a. mahi mahi), swordfish, tuna, and other predators. In the early twentieth century, these fish were even studied as a possible model for new airplane designs.

But do these fish actually have the power of flight? Only using high-tech cameras could scientists reveal the answer to this mystery. The photographic images confirmed that flying fish don’t exactly fly, but instead glide on air currents like a kite.
First, the fish presses its large pectoral fins against its body as it swims, resembling a torpedo, and, using its tail fin, can reach speeds up to 22 mph. With this momentum, the fish breaks the surface of the water and spreads its “wings,” while using its tail fin to build up more speed along the surface. Keeping its pectoral fins stretched out, the fish gets caught in the updraft created by the waves. And liftoff!

Biologists agree that flying fish don’t exactly fly, but instead glide on air currents like a kite. Unlike birds, flying fish can’t flap their fins to gain speed or change direction, but when they start to lose speed, they land back on the surface, taxi again, and relaunch without going back underwater. In this way, they can easily glide the length of a football field or even three! Sailing from Honolulu, Mark Twain said flying fish in the sun looked like “a flight of silver fruit-knives.”

Unexpected encounters between sailors and flying fish have occurred throughout history, and it isn’t unheard of for sailors to come under surprise attack from these high-speed fish. A sailor on the nineteenth-century whaling ship Morrison of New London, Connecticut, got hit so hard in the face that it looked “[as if one] of his shipmates had struck him with his fist.” While flying fish typically glide five or so feet above the surface of the water, they are capable of much greater heights. Just imagine, if these fish could fly over land, they could soar into your room through a third-floor window. Sailors who found them on the deck in the morning would often cook the fish for breakfast; although they are bony fish, they are tasty to eat.

Over sixty different species of flying fish live in the warmer waters of the tropics and subtropics. These “fish out of water” escape their prey and cover distances in a way that most people wouldn’t think possible. Though they can’t fly like a bird, they do make nest-like bundles of a type of seaweed called sargassum, in which they deposit their eggs.

Both seafarers from history and modern-day sailors have often encountered these remarkable creatures that glide with ease through air and water, but today we understand much more about the secret to their flight. 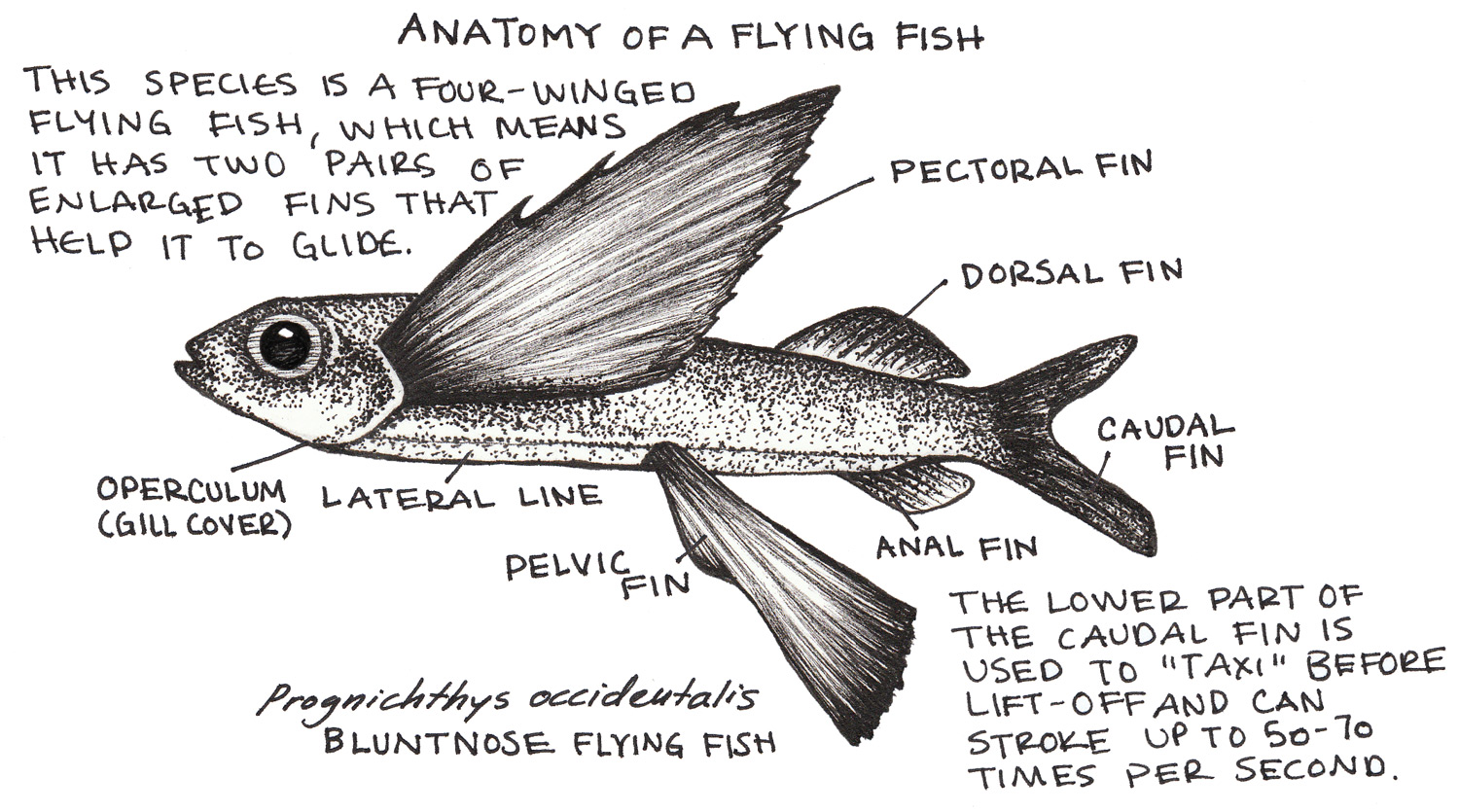 Gabrielle Joffe is a senior at Williams College, majoring in literature, and an alumna of the Williams-Mystic Maritime Studies Program at Mystic Seaport. Having been immersed in the culture of ships and the sea for a semester, she hopes to do a bit more sailing while pursuing her interest in museum studies.