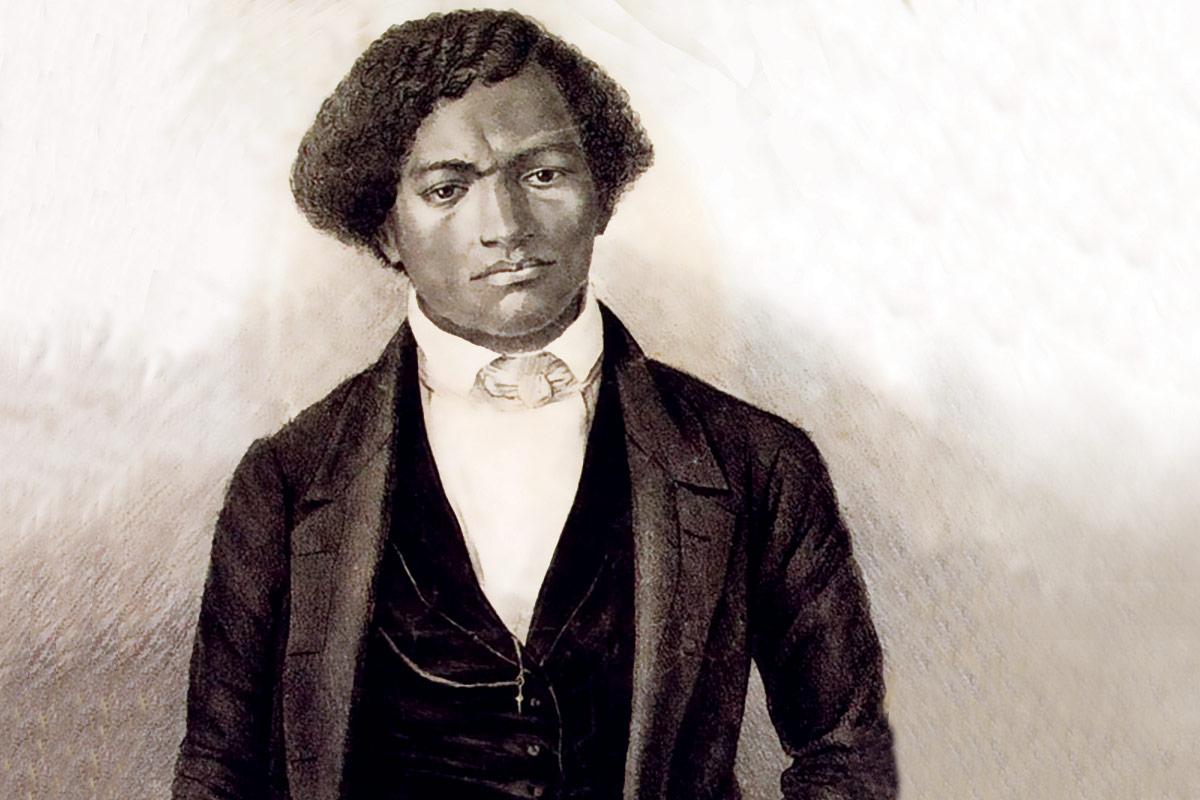 For I Knew a Ship from Stem to Stern

Abolitionist, orator, and statesman, Frederick Douglass had been born into slavery. By the time he was a young man in 1838, he was working as a ship’s caulker in a Baltimore shipyard, pounding oakum into the seams between the planks of wooden vessels to make them water-tight. It was a difficult but skilled job, but considerably better than his previous work on a plantation. In the 18th century, slave owners in port cities often sent their slaves out as maritime laborers and then pocketed their wages each week.

Enslavement and relinquishing his hard-earned money was difficult for Frederick Douglass to bear, and it cemented his resolve to escape to the North. His experience around ships and sailors would help him succeed in getting away, as free African-American mariners were not uncommon and they carried documentation on them at all times to verify that they were not escaped slaves. 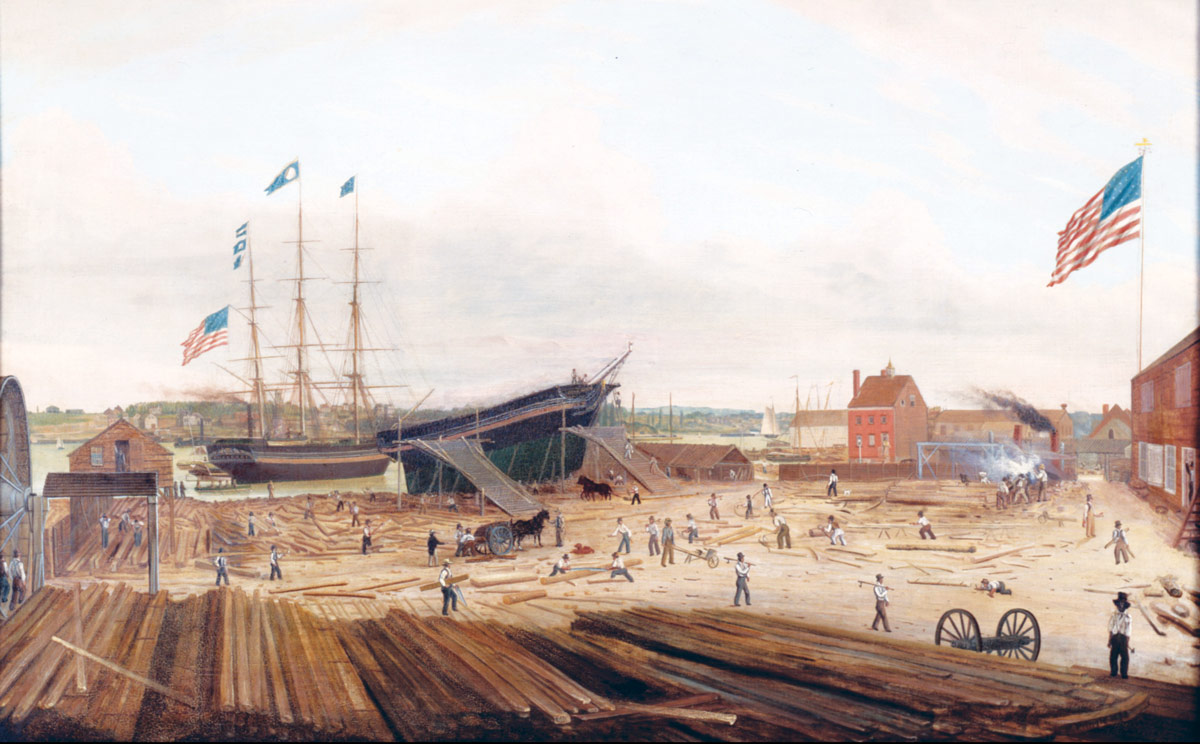 Frederick Douglass’s job in a shipyard gave him the opportunity for escape by posing as a free seaman. This image depicts a typical American shipyard in 1833.

Unlike many others who escaped their bondage via ships and boats, Douglass instead boarded a train heading to New York, posing as a sailor. He wore typical mariners’ clothing and carried documents borrowed from a free African American sailor that would allow him freedom to travel. “My knowledge of ships and sailor’s talk came much to my assistance, for I knew a ship from stem to stern, and from keelson to cross-trees, and could talk sailor like an old salt,” he wrote in his memoirs in 1882. Some strategy, luck, and “kind feelings…towards those who go down to the sea in ships” helped him reach New York—and freedom—a day later. He would make his way to New Bedford, Massachusetts, then a busy whaling port. It was also home to a group of anti-slavery activists, who helped him get started in his new life and who encouraged him to join them in their efforts to eradicate slavery in the United States. Douglass, who had been taught how to read by a previous master’s wife, became a life-long activist, author, orator, and diplomat, and had a significant role in the abolitionist movement. 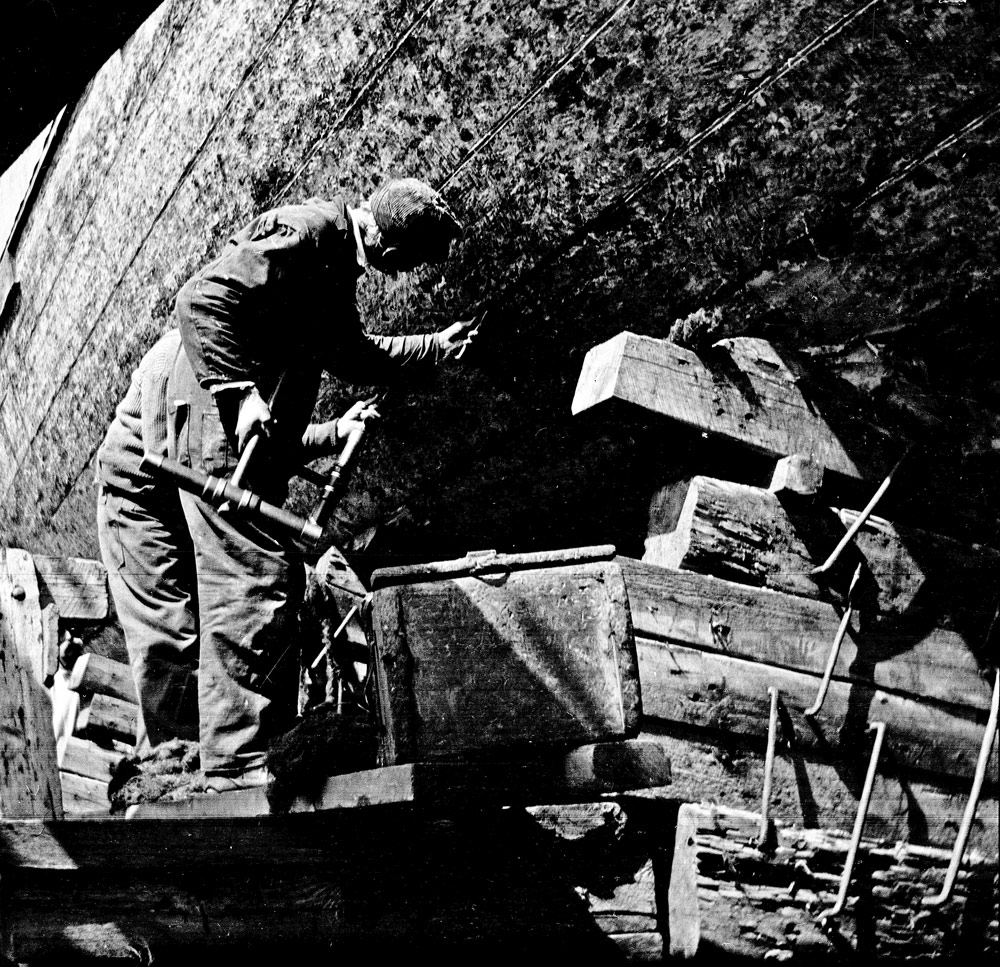 Caulking the Seams, photo by Albert Cook Church (1880–1965).
Shipbuilders fastened planks edge to edge to create the shell of the wooden hull. Before a ship could be launched, someone had to fill the spaces between the planks to keep them watertight. This task fell to the caulker, who used a mallet and caulking irons to drive hempen fibers, called oakum, into the tight spaces between planks. It was a tedious and uncomfortable job, but nevertheless a
skilled trade that was in demand in most port towns. Courtesy of New Bedford Whaling Museum.

While Frederick Douglass’s skills as an author and speaker were extraordinary, his experience in the maritime labor force was not uncommon. Slaves and freeborn African-Americans built and manned ships, worked in the fisheries, and provided a steady labor force in maritime support industries, such as caulking—Frederick Douglass’s occupation during his enslavement.

Douglass was in a place that had him working side by side with free sailors, so when he saw his chance to pose as a free black seaman and get north to freedom, he took it. Maritime trades provided steady employment for African Americans, both enslaved and free, and those who escaped could rely on their skills to find work in port towns and cities in the north.

Adapted from a 2017 article by Elizabeth Moore, NOAA NMS, published online at https://sanctuaries.noaa.gov/news/feb17/for-i-knew-a-ship-from-stem-to-stern.html.