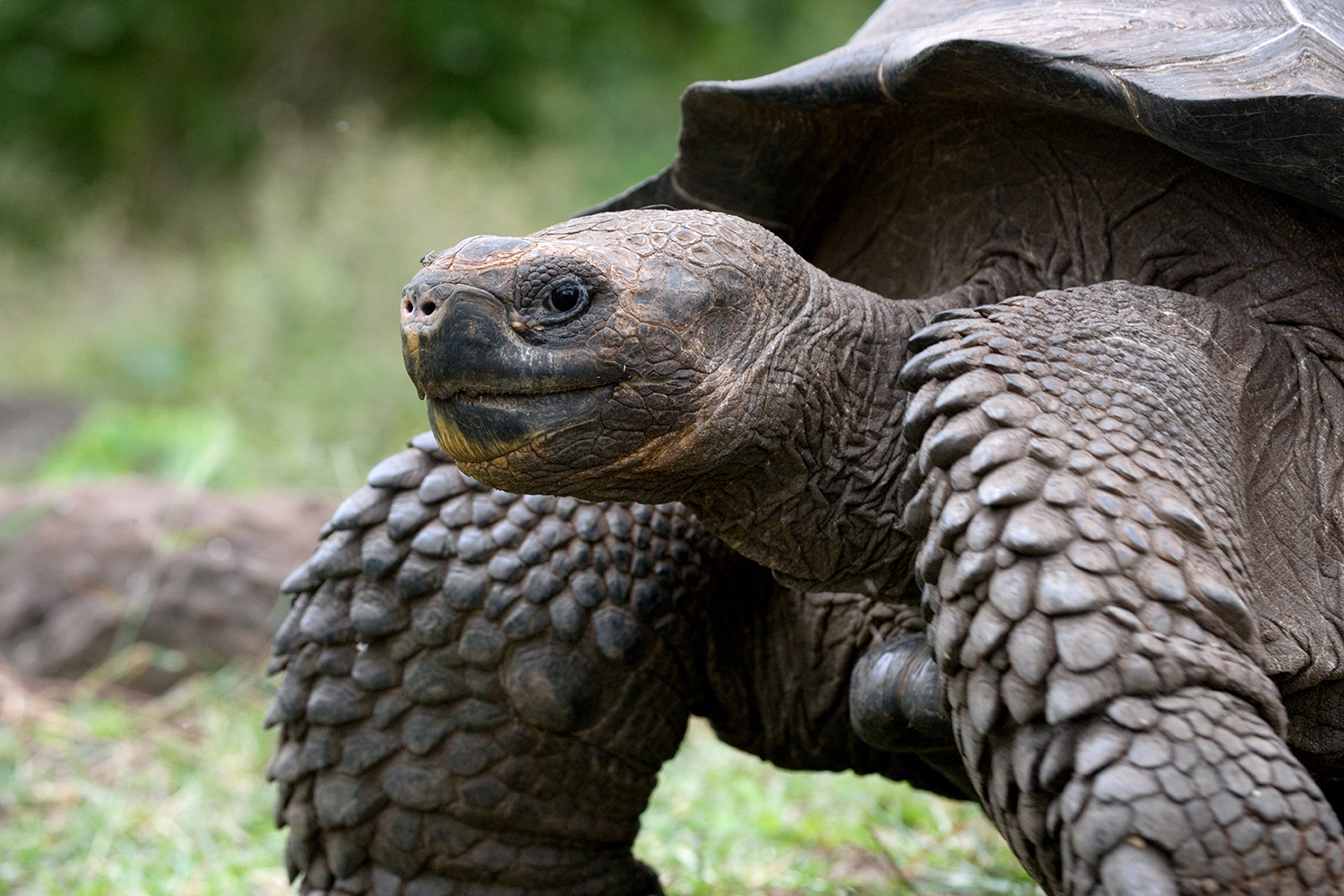 Scientific Name:
Geochelone sp.
Lifespan:
100 years
It can measure more than 5 ft. over the curve of the shell.

When Admiral David Porter, commander of the ship USS Essex, anchored in the Galápagos Islands in the spring of 1813, he wrote: “Every one appeared desirous of securing as large a stock of this provision as possible for the cruise. They were brought the distance of from three to four miles, through thorns and over sharp rocks; yet it was no uncommon thing for them to make three and four trips a day, each with tortoises weighing from fifty to a hundred weight.” 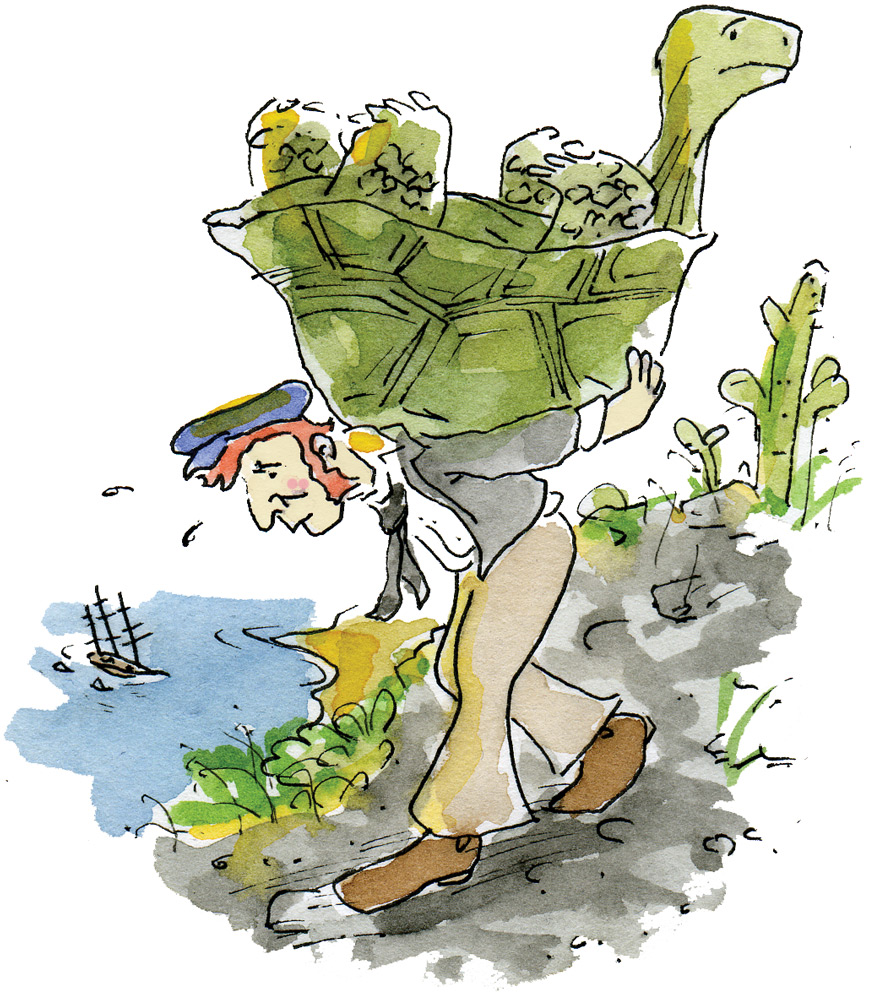 The sailors captured living tortoises and loaded them aboard their ship?

Fresh meat of any kind was a rare treat for sailors during long voyages in warm climates, mostly because they could not keep these perishable foods safe before there was such a thing as refrigeration at sea. Mariners sailing in the Pacific discovered that Galápagos giant tortoises can survive for perhaps as long as a year without water, so they could be stowed in a ship’s hold like cargo. Pirate ships, merchant vessels, naval frigates, and especially whaling ships, all anchored at the Galápagos Islands to help themselves to these massive, slow-moving, vegetable-munching reptiles. (‘Galápago’ is a Spanish word for ‘tortoise’ or ‘turtle.’) Using methods that seem cruel to us today, sailors dragged the animals on the ground or carried them on their backs with straps they made from sailcloth. For an especially heavy tortoise—some have been recorded as weighing over 650 pounds—men hoisted the animal on oars and trudged it to the beach. Sometimes sailors lowered tortoises down into boats from cliffs hundreds of feet high.

Unfortunately, over time, the men of these ships took too many. Historians believe they gathered more than 100,000 tortoises over the centuries. Both intentionally and sometimes accidentally, the crews of visiting boats also set fire to some of the islands and introduced other animals, such as rodents and pigs, that destroyed the native plants and ate the tortoises’ eggs and young.

Different Galápagos giant tortoise species, living on separate islands, evolved unique shell shapes and neck lengths, adapting to the amount of moisture, the terrain, and the type of plants in each of their specific habitats. When the young Charles Darwin visited the Galápagos during his voyage aboard HMS Beagle (1831-6), he heard about these different species of tortoises: it was one of the first seeds in his mind that led to his later earth-shaking ideas about natural selection and evolution. 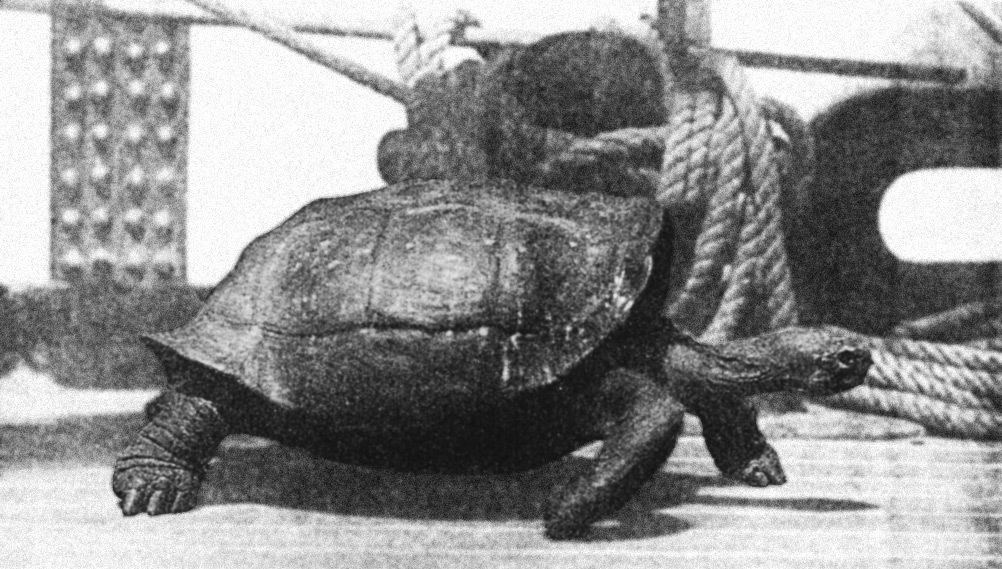 This giant Galápagos tortoise walked the decks of USS Albatross in 1891 until its services were required at the dinner table. Photo by C.H. Townsend.

Visiting ships that removed the animals from the islands or damaged or destroyed the natural habitat of those left behind, forced a few species of giant tortoises into extinction, and others nearly so. Today, there remain only eleven of the original fourteen or fifteen. Thankfully, if you visit the Galápagos now, especially on Isabela Island, you can still see thousands of these creatures quietly ambling about. They are vigorously protected.

Galápagos giant tortoises are some of the longest living animals. Individuals have roamed the earth for more than a century, and there are credible claims of tortoises over 150 years old. They have an immensely slow metabolism and a bladder storage sac of fresh water, part of the reason they were able to survive for so long when stacked in the hold of a ship. Sailors ate tortoise steaks, used the tortoises’ fat as butter, and cooked the scraps for soup. If they were marooned or
shipwrecked, the men even drank tortoise blood and cut them open for the fresh water.

According to novelist Herman Melville, many of sailors thought these giant tortoises held the souls of old “wicked sea officers.” And Admiral Porter wrote: “Nothing, perhaps, can be more disagreeable or clumsy than they are in their external appearance. Their motion resembles strongly that of the elephant; their steps slow, regular, and heavy.” Then again, the tortoises surely did not find the sailors pleasing to look at either, having no interest in being shanghaied for a sea voyage that ended in their being served as the main course. 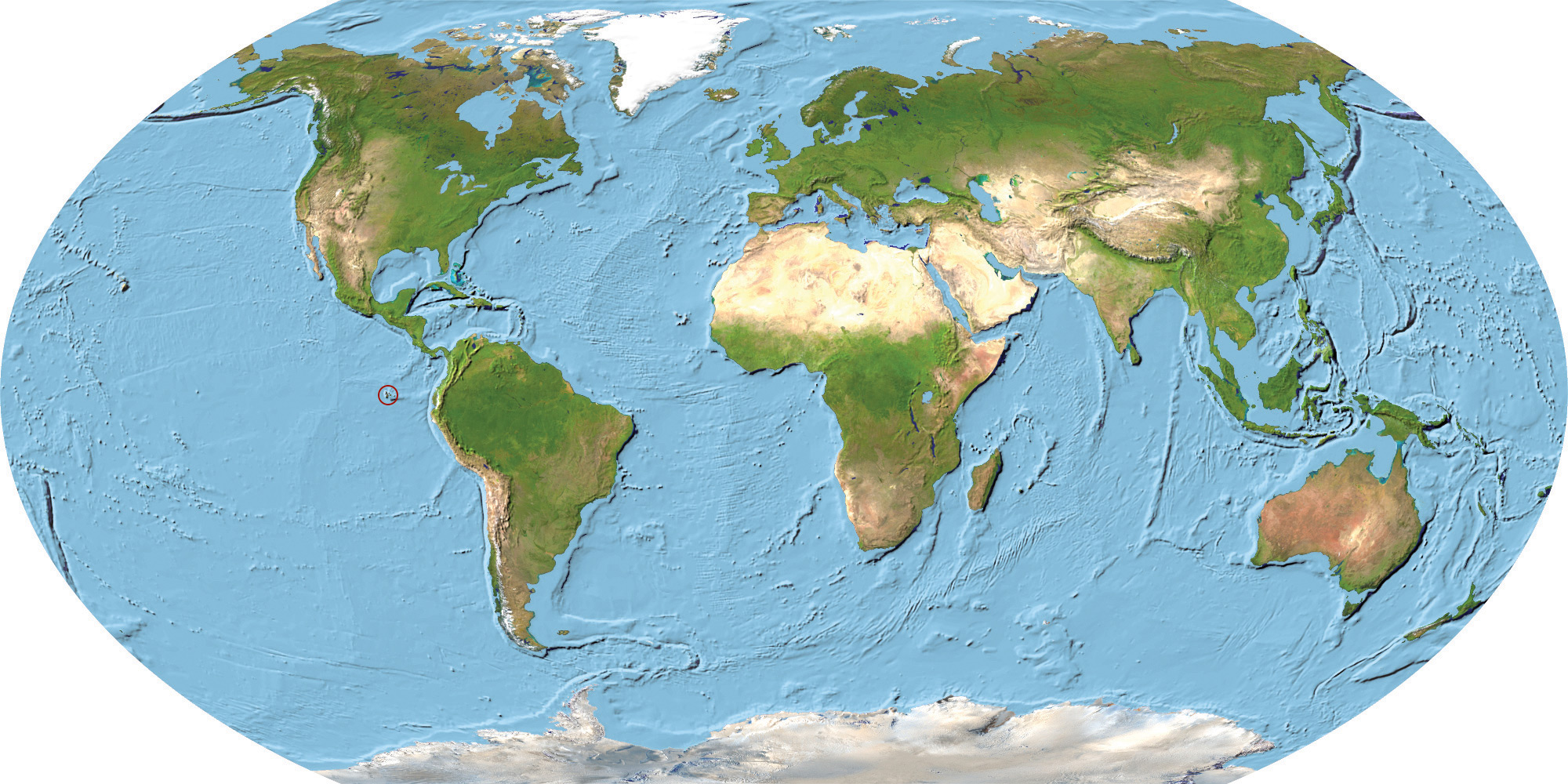 The Galápagos Islands are an archipelago of volcanic islands 600 miles off the coast of Ecuador in the Pacific Ocean. They were discovered by Europeans in 1535 when a Spanish ship blew off course on its way to Peru from Spain. The islands are famous for the unique and diverse species of animals that live there. The study of the Galápagos wildlife provided some crucial early clues… for Charles Darwin’s famous book, On the Origin of Species (1859), which introduced the idea of evolution through natural selection. 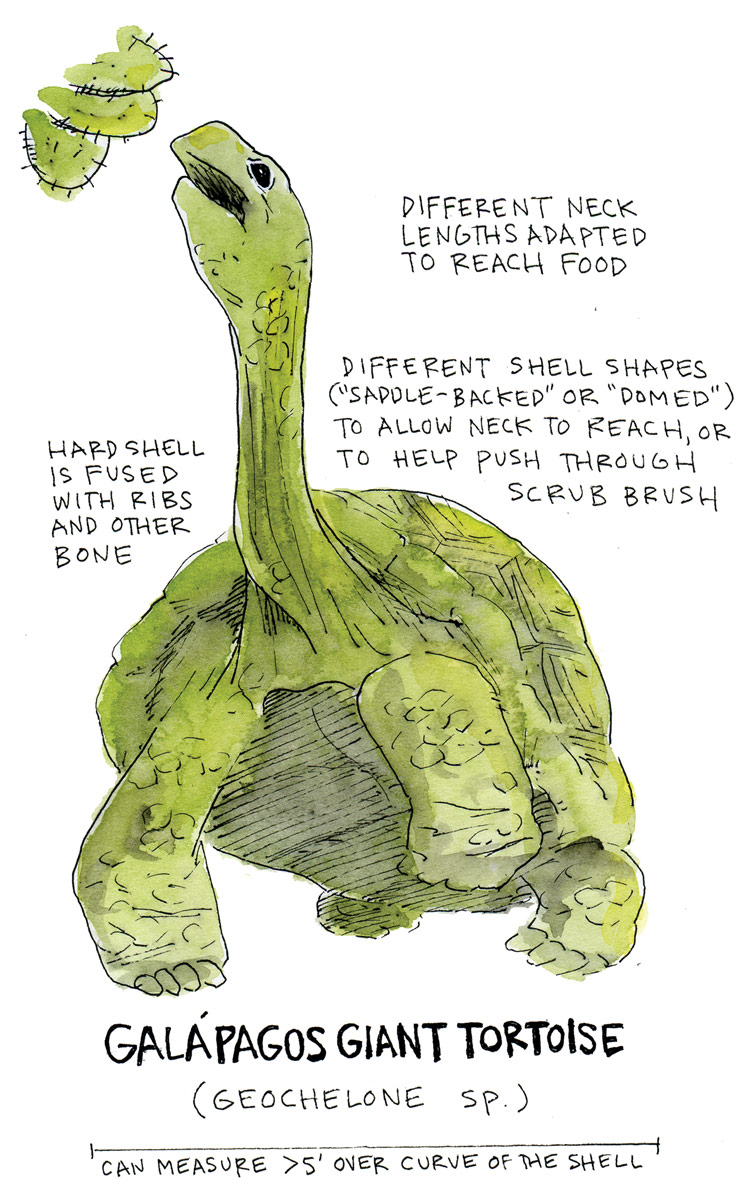