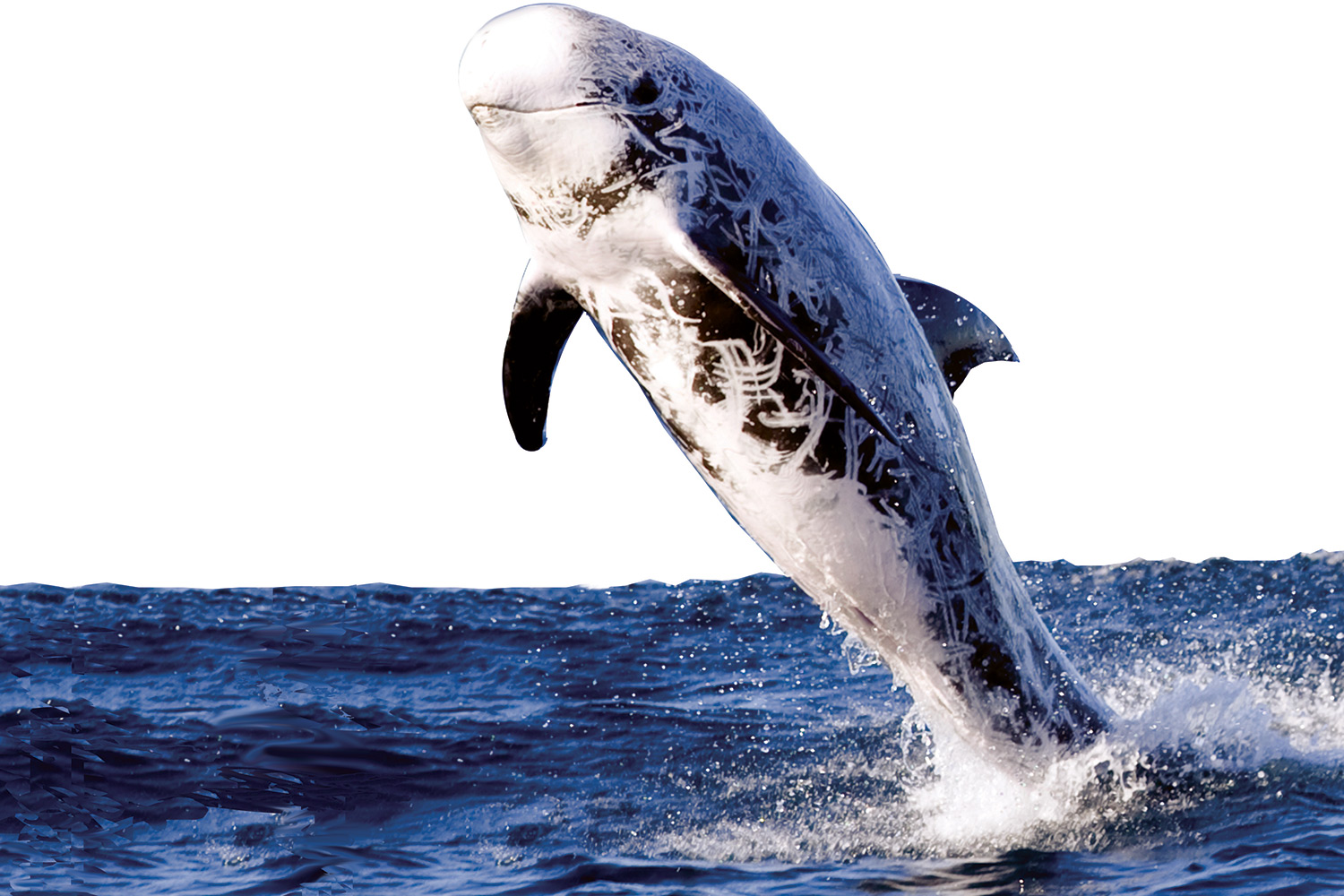 Scientific Name:
Grampus Griseus
Grampus Dolphin have a vertical crease to their melon and only have teeth in their lower jaw.

If you were reading The New York Times on the 23rd of August, 1896, this headline might have caught your eye: “Four Girls on a Schooner.” The reporter explained that four young women had just returned from nearly a month’s voyage, from New York City to Nova Scotia and back, aboard a merchant schooner named Gypsum Express. They had volunteered so they could get the chance to travel on the ocean as working sailors. They worked hard, stood their watches, rode through a nasty squall, saw a waterspout, and just seemed to have had a fabulous time overall. At one point in the article, the reporter wrote about an animal that the young women saw over the ship’s rail: “The most exasperating calms and dispiriting fogs marked the early part of the homeward voyage, but a grampus, or cowfish, some twenty feet long, enabled Miss Roach to bring her Kodak into play.” 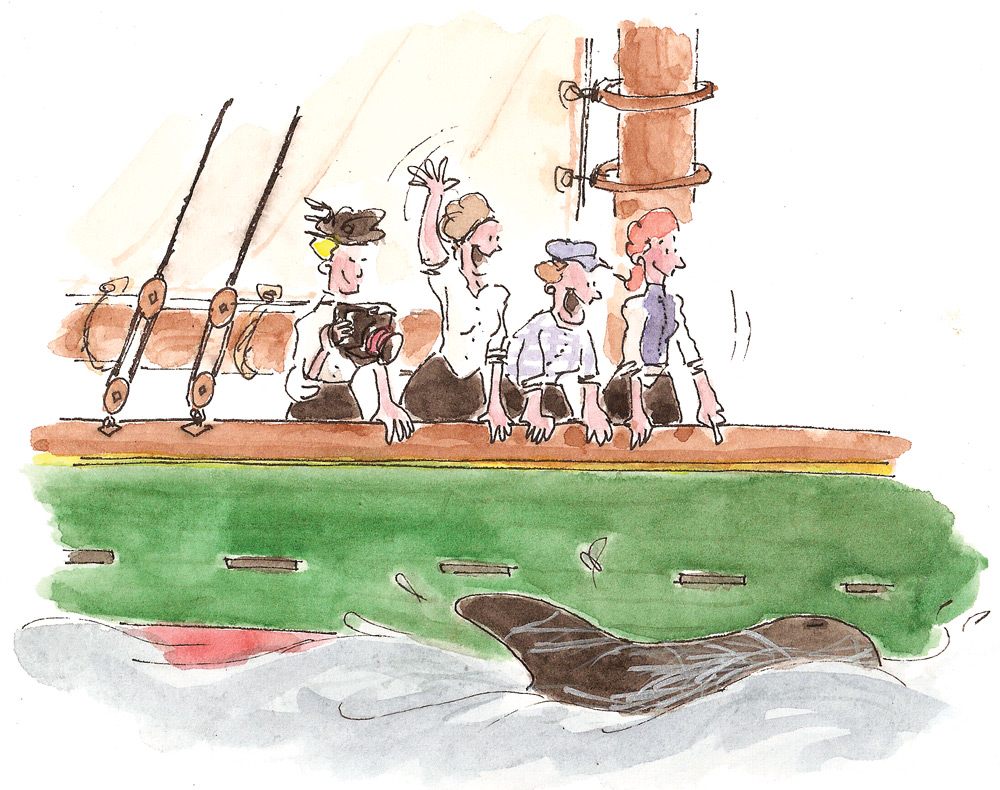 They took a photograph of a grampus? A cowfish? Today, we call this animal a Risso’s Dolphin. At sea, it can be confused with a bottlenose dolphin, a pilot whale, or a killer whale—in part because it has a tall dorsal fin that curls backwards. In fact, some sailors also used to refer to killer whales as grampus. Marine biologist and author George Fitcher wrote that the word “grampus” comes from the joining of two simple French words: big (grand) and fish (poisson).A grampus has a squarish head and a curved mouth that looks to us like it’s smiling. Its grey body is often covered with scratches and scars, which might come from squid tentacles, one of its favorite foods. If the grampus those young women saw was indeed twenty feet long, it would have been an exceptionally large one, as these dolphins are normally less than a dozen feet from nose to tail.

Grampus can be found around the world in tropical and temperate oceans as far north as Alaska and the Shetland Islands and as far south as Tasmania and Cape Horn, most commonly in offshore waters. In the 1890s, when those young women were sailing across the Gulf of Maine, one particular grampus became something of a celebrity off the coast of New Zealand because it continually followed ships, leaping in their bow wakes. The sailors named this grampus “Pelorus Jack.” According to Paul Horsman, it became the first legally protected dolphin because the Governor of New Zealand signed an official order in 1904, worded: “to prohibit the taking of the fish or mammal known as Risso’s dolphin in the waters of Cook Strait or bays, sounds and estuaries adjacent thereto.”

Two years after those four women made the New York Times, Rudyard Kipling wrote his novel Captains Courageous, in which a young rich kid named Harvey finds himself aboard a fishing schooner with another boy, Dan, who is already an experienced salt on the Grand Banks. Kipling writes:

At the first splash a silvery-white ghost rose bolt upright from the oily water and sighed a weird whistling sigh. Harvey started back with a shout, but Dan only laughed. “Grampus,” said he. “Beggin’ fer fish-heads. They up-eend thet way when they’re hungry. Breath on him like the doleful tombs, hain’t he?” A horrible stench of decayed fish filled the air as the pillar of white sank, and the water bubbled oilily. “Hain’t ye never seen a grampus up-eend before? You’ll see ‘em by hundreds ‘fore ye’re through.”

Did Rudyard Kipling read that New York Times article about the four female sailors and the grampus? 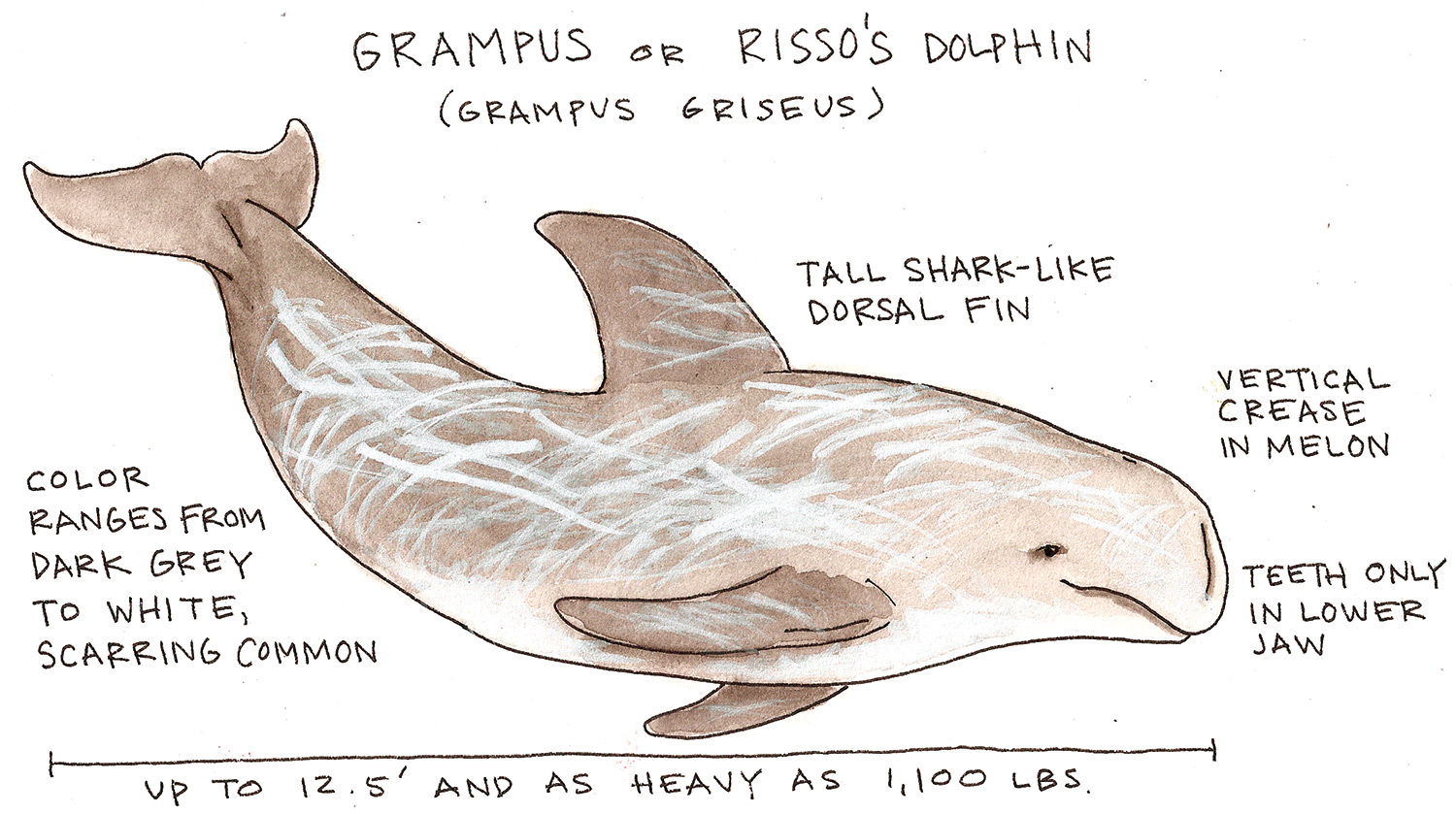