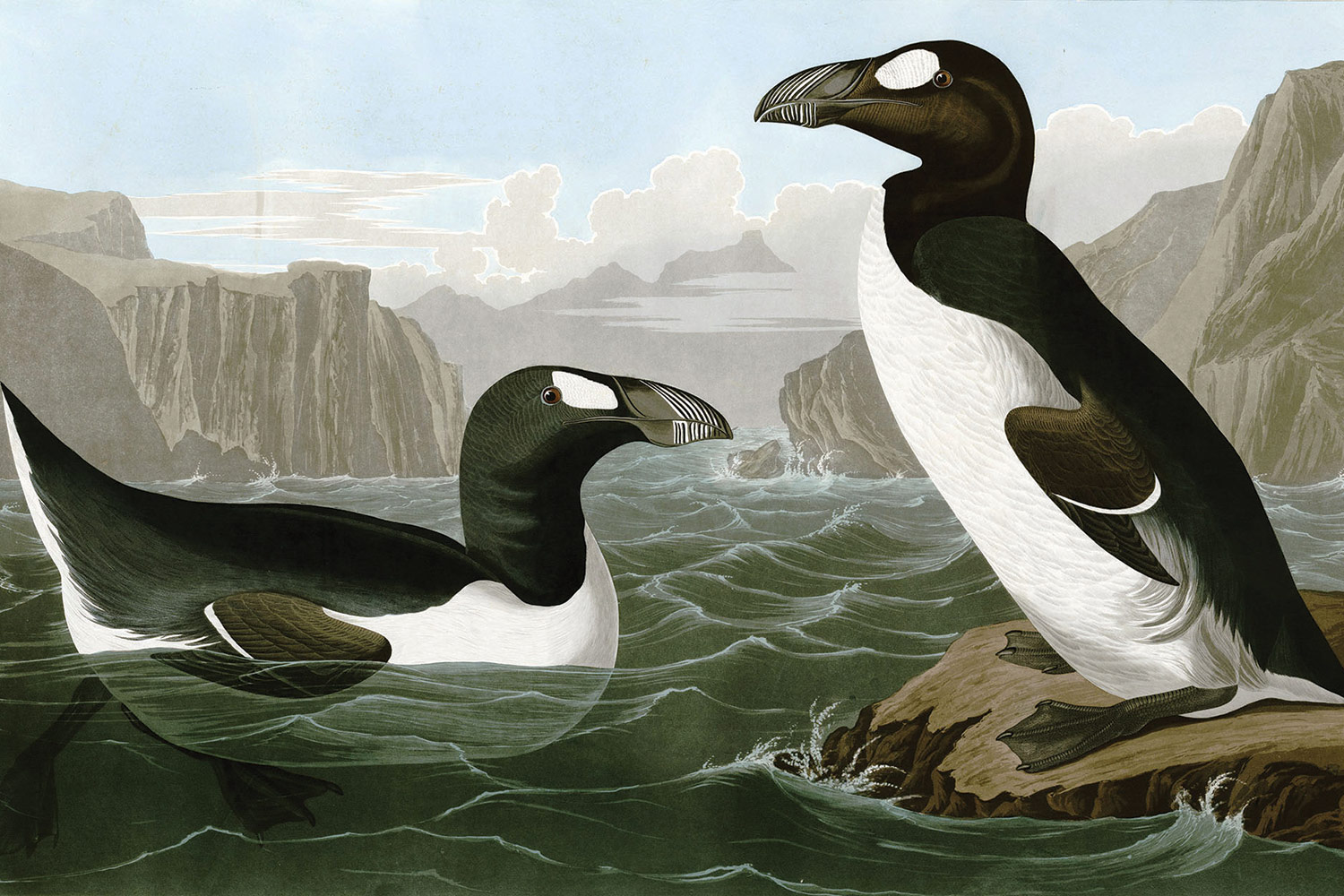 Scientific Name:
Alca Impennis
The Great Auk is an extinct species. The average length 30-32" and weighed approximately 11 lbs. Look at the much smaller Razorbill for a similar living species.

In the featured painting by John James Audubon and Robert Havell, Jr. from 1836, the two Great Auks show off their profiles by standing vigilantly on a rock and swimming daintily in rough, cold seas. Audubon is the most famous and arguably the most talented of America’s painters of birds. But here’s the thing—Audubon never saw a live Great Auk, and if there were any of these birds still living in the far northern reaches of our continent in the 1830s, they were certainly among the last of their kind to walk on Earth. 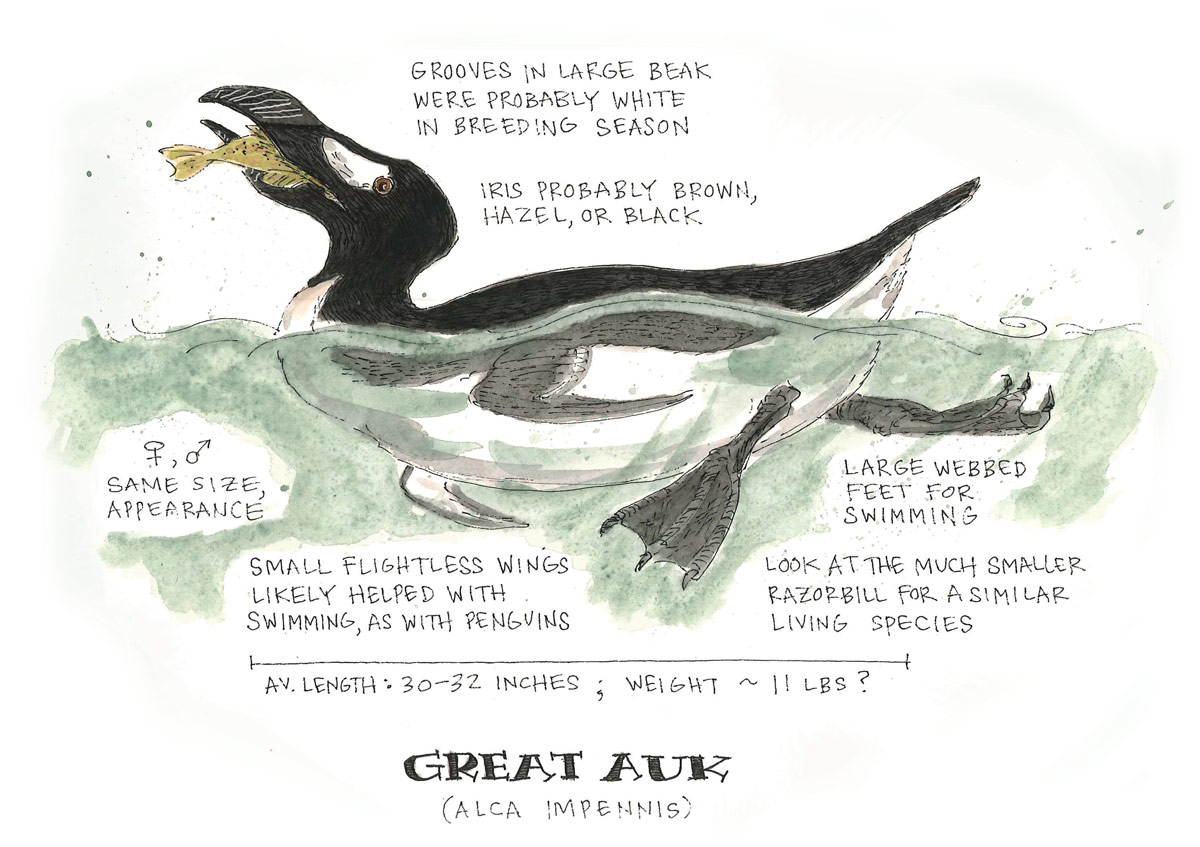 To watch and collect specimens for The Birds of America, Audubon often traveled by boat or ship. His final saltwater research voyage was up to Newfoundland and Labrador out of Eastport, Maine, for the summer of 1833. He chartered a 100-ton schooner named the Ripley, aboard which he brought his son and four assistants. They put nails in their boots to help them walk on the slippery rocks of the birds’ rookeries, and he wrote to his wife that they wore “round white wool hats with a piece of oil cloth dangling on our shoulders to prevent the wet running down our necks.” As the Ripley anchored off the coasts and islands of the Canadian Maritimes, Audubon painted gannets, petrels, eiders, cormorants, murres, guillemots, and a variety of other seabirds—but no Great Auks. Audubon knew they were exceptionally rare.

As he traveled along the coast, local people told him that the birds still lived on at least one desolate island off Newfoundland, and that the fishermen still caught the young of Great Auks to use for bait to catch cod and other fish. Yet by the end of the summer, Audubon wasn’t able to get out to that island and his team was unable to find these large, flightless seabirds anywhere else. The fishermen in Labrador called them penguins. Other fishermen, sailors, and naturalists knew them as “garefowl.”

Audubon wrote a couple years later: “The only authentic account of the occurrence of this bird on our coast that I possess, was obtained from Mr. Henry Havell, brother of my Engraver, who, when on his passage from New York to England, hooked a Great Auk on the banks of Newfoundland, in extremely boisterous weather. On being hauled on board, it was left at liberty on the deck. It walked very awkwardly, often tumbled over, bit every one within reach of its powerful bill, and refused food of all kinds. After continuing several days on board, it was restored to its proper element.” 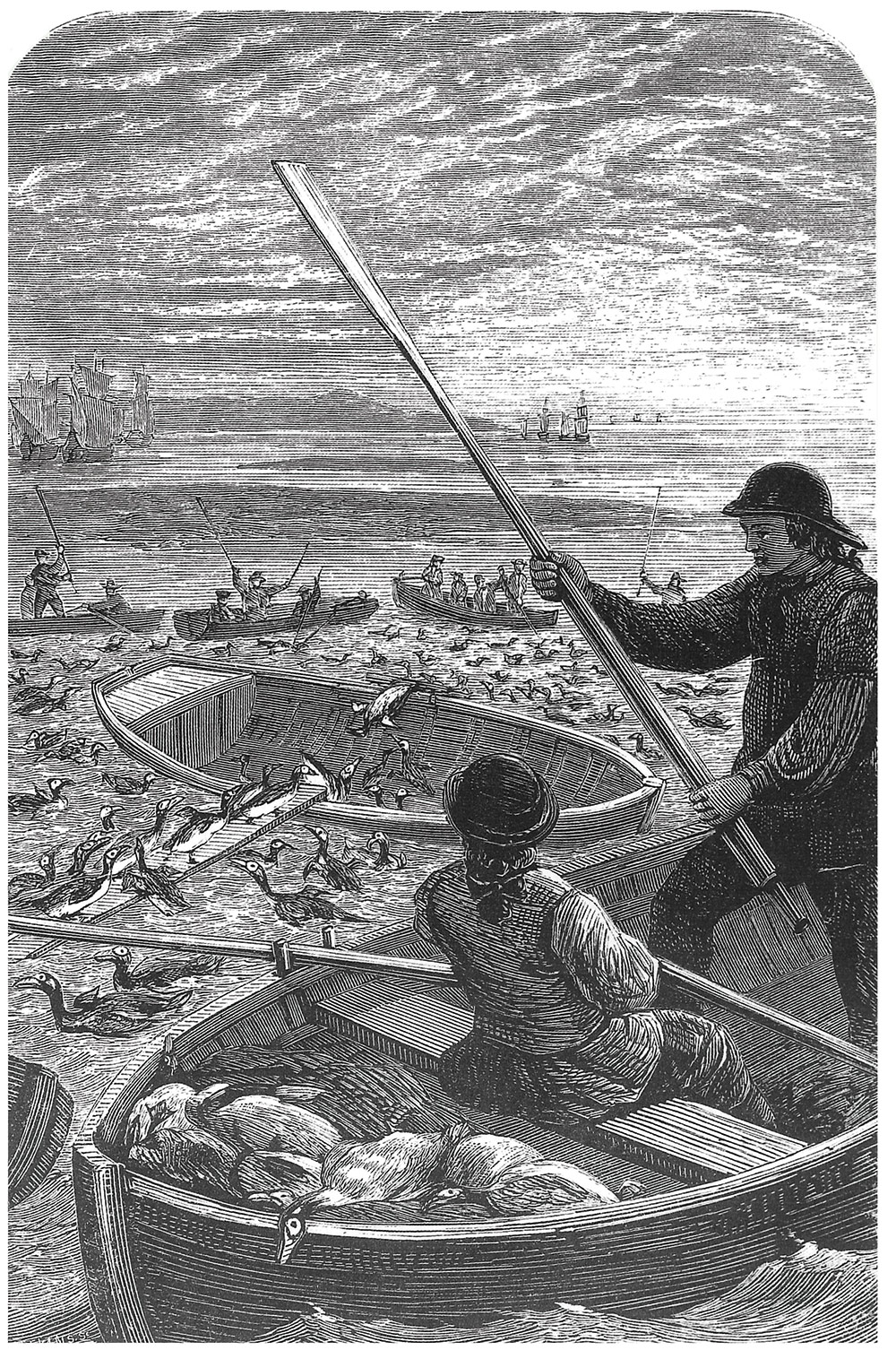 This illustration of hunting Great Auks on the coast of Newfoundland was made in 1880, decades after the birds had been hunted to extinction.

The last known Great Auk sighting in Newfoundland waters was in 1841. Then in 1844 hunters killed two Great Auks on a tiny rock island off Iceland, which remains the last verifiable account of these now extinct birds.

Great Auks once lived in populous dense colonies and, much like penguins, had evolved an insulating layer of fat. Flightless and large, they made easy pickings for early European settlers for food. Sailors gathered the birds and their eggs in vast numbers, going back to at least 1534 with Jacques Cartier’s expedition to Newfoundland: on “Isle of Birds” (Funk Island) his crew herded, killed, and salted “5 or 6 barrels” of Great Auks in less than a half hour, “as if they had been stones.”

No video or photography of living Great Auks exists. We do not know what their chicks looked like. We also do not know—nor did Audubon—the exact coloring of their beaks and eyes, since these can change after an animal dies. About eighty “skins” or taxidermed Great Auks remain today, including the one that Audubon himself presumably bought in London in 1836 in order to create this painting. Audubon’s stuffed Great Auk found its way to the collection of Vassar College until 1964, when the Royal Ontario Museum bought the stuffed extinct bird for $12,500. Vassar threw in a stuffed, extinct Labrador Duck.

Audubon used this stuffed Great Auk specimen to paint the birds in life, but he left the background, as he often did, to Robert Havell Jr., his engraver. Havell painted the steep cliffs and gale force waves, even though he had not been on the expedition to Newfoundland or Labrador.

Scholar Christoph Irmscher put it best: “The scene as a whole has a fantastical quality, removed from any reality we might want to associate with it: the waves arrested in timelessness as in Japanese prints, the rocks bathed in a light that seems to come from nowhere in particular, a perfect stage for birds that exist no longer in nature, but only in the naturalist’s mind and on the pages of his big book.”