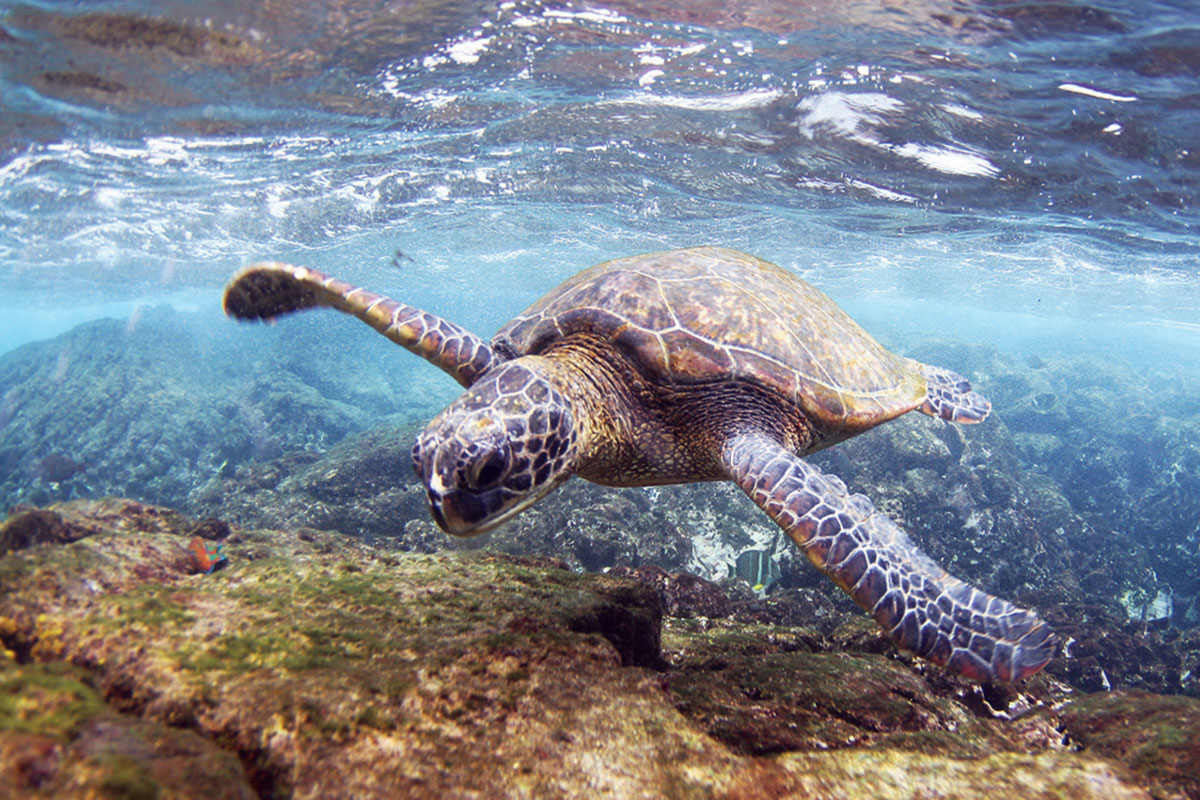 Scientific Name:
Chelonia mydas
Lifespan:
At least 60 years or more. Female green turtles reach maturity at 25 to 35 years.
The endangered green turtle is one of the largest sea turtles, averaging 150-440 pounds. The only herbivore among the different species. Named for the color of their cartilage and fat, not their shells. 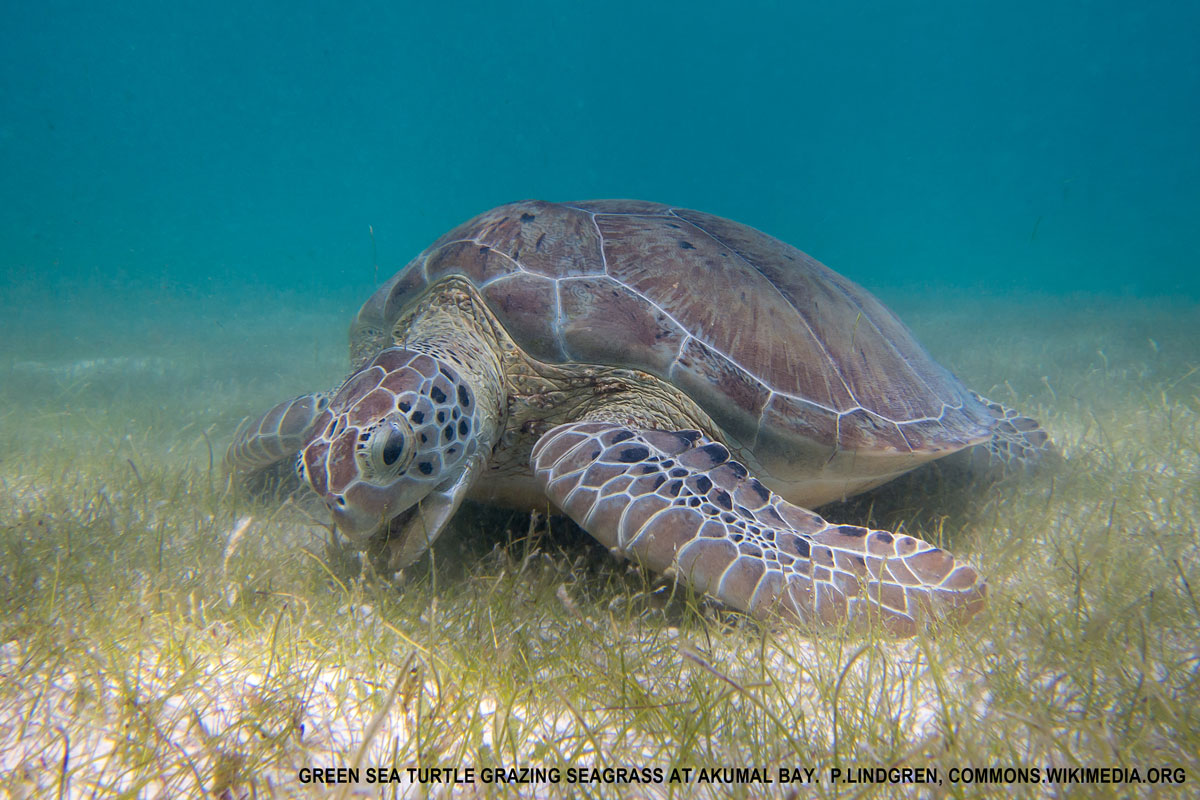 A sea turtle was once caught by a fisherman, caught his own lucky break, but then had the miserable misfortune to be captured a second time by the same guy. The only silver lining to this unfortunate tale is that this incident helped build the case for sea turtle conservation around the world.

Now, this was an exceptionally large green turtle, maybe over four hundred pounds. His life must have begun as did that of all other sea turtles for tens of millions of years before him. His mother dug a hole with her rear flippers on a remote sandy beach of the western Caribbean. She deposited about a hundred eggs, covered the hole with sand, wished them all buena suerte, and went back to sea. After about two months, the tiny baby turtle hatched and, somehow, through intuition and genetics, he and the others knew that they needed to climb out and make it to the water—and fast. Several of his siblings would have been too slow or just unlucky, eaten that night on the beach by, say, a heron or a coyote. Once the rest made it into the water, several more baby turtles were likely eaten by underwater predators such as jackfish or rays, while this little turtle and the other survivors managed to swim to relative safety.

In the wild at sea, green turtles might live to be more than sixty years old. It’s not known exactly how old this particular twice-caught giant was, but at some point in his life he survived an attack by sharks or a school of tuna or dolphinfish, leaving all four of his flippers scalloped by a series of bites, scarred for life like a reptilian Harry Potter. 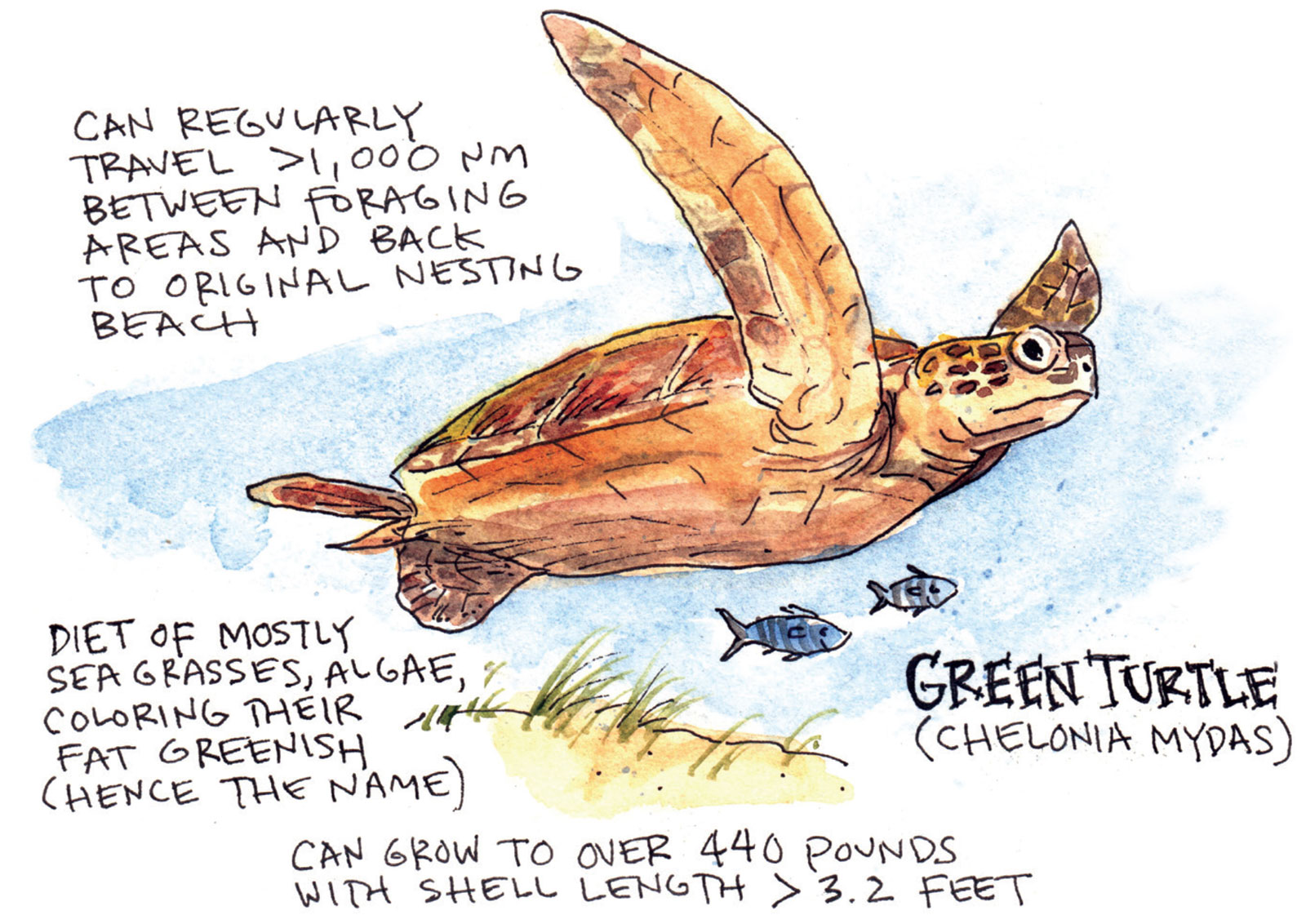 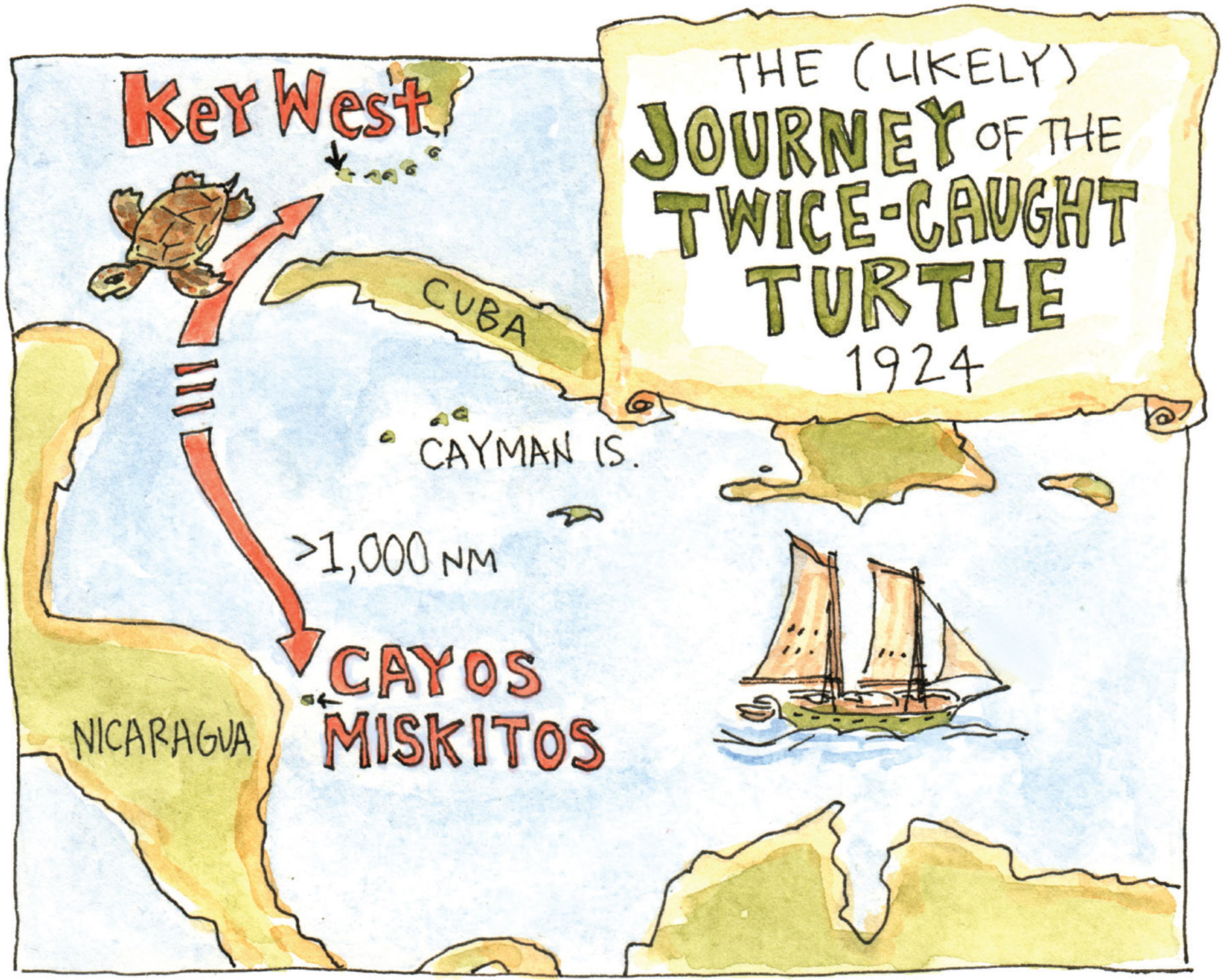 The first capture was in 1924. Captain Charles Bush, a veteran skipper-owner of a turtle schooner out of the Cayman Islands, had sailed all the way down to Mosquito Cay, off the Nicaraguan coast. As was the custom, Captain Bush branded his initials into the green turtle’s shell.

By the 1920s, Caymanian captains had been sailing down to the Central American coast for over a century, ever since their own waters had been fished out of turtles by early European mariners and colonists. Indigenous people, here and throughout the Caribbean, however, had been hunting green turtles for millennia.

The Miskitu people of Central America, for example, became famous for their skills catching sea turtles by boat and with spears. When the first Spanish and English explorers arrived in the 1500s, these mariners wrote of the abundance of turtles and the Miskitu’s skill at catching them. Pirates even kidnapped Miskitu turtle hunters to help supply food for their ship’s crew. Sailors used to love to eat turtle because the nutritious animals could survive on board for weeks at a time, greatly advancing the ability of colonial mariners, for better or worse, to sail to all corners of the Caribbean. Green turtles were especially prized because, as mostly vegetarians, the flavor of their meat was apparently quite good. As historian Sharika Crawford explains, “The expansion of exploration and peopling of the region was dependent on sea turtles.” 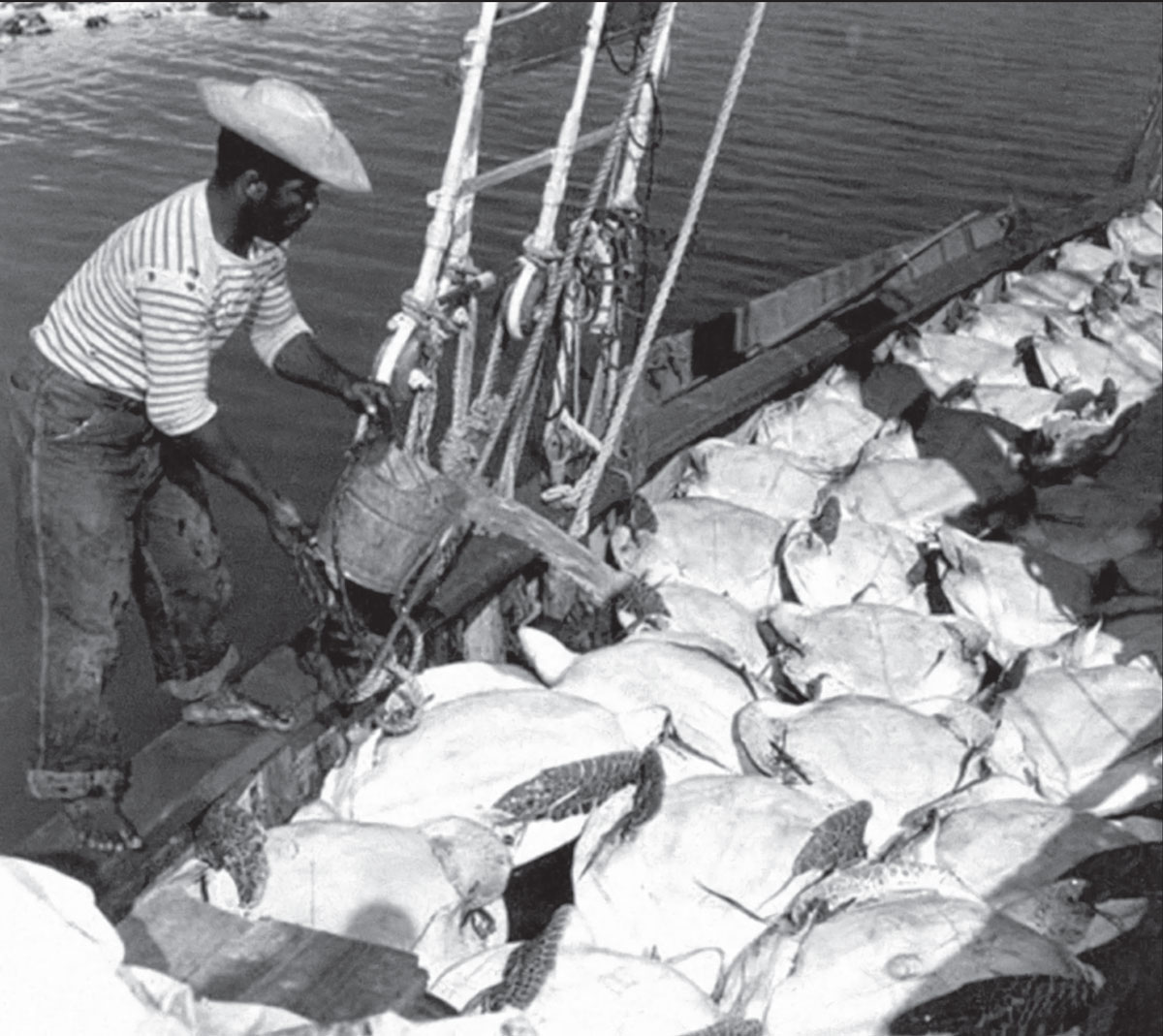 After Captain Bush caught the scarred green turtle in a net and branded the shell, he sailed his cargo of turtles to Key West, Florida, where he sold them to local merchants. The animals were placed in a fenced area in shallow water, known as a kraal, to keep them alive before being shipped elsewhere or killed for turtle soup or canned meat. But then an October hurricane blew through the region and wrecked the kraal. All the turtles escaped.

This is where the story gets truly exceptional. Five months after he’d caught that big turtle the first time, Captain Bush was again fishing off Mosquito Cay. He saw again this turtle’s size and the scalloped flippers. He caught this turtle in his nets again, found his brand, sailed the animal back up to Key West with some others, and sold the giant a second time. The merchants were none the wiser, unaware that one turtle in the kraal was worth two for Captain Bush. (See what I did there?)

Years later, along came a marine biologist named Archie Carr. “The most serious handicaps in any effort to save the green turtle is our ignorance of its migratory movements,” Carr wrote in 1954. “Fishermen everywhere believe the green turtle migrates. Such a belief can also be found in the writings of the naturalists. But nowhere in the canons of zoology is there a shred of what could be called scientific evidence to prove it.”

So Carr talked to the Caymanian fishermen and heard, among several other stories, this one about Captain Bush and the twice-caught turtle. Carr designed tagging studies to trace green turtle movements as he began to teach an international audience about sea turtles’ extraordinary passages and power of navigation, thus working to help protect the nesting beaches of sea turtles in the Caribbean and around the world.

Scientists today theorize that sea turtles find their way by using a combination of magnetism, wave direction, and sensitivity to solar and lunar light—and maybe also sound and smell. Swimming along their millennia-old migratory highways, green turtles are now only at about one percent of their historical population. As they fly underwater through the Caribbean Sea, their paths from feeding grounds to nesting beaches remain mostly a mystery to scientists—even with the use of DNA identification, satellite tagging, and other advanced research methods.

For more on green turtles and the people of the Caribbean, see Sharika Crawford’s The Last Turtlemen of the Caribbean. For more “Animals in Sea History,” see www.seahistory.org or educators.mysticseaport.org.