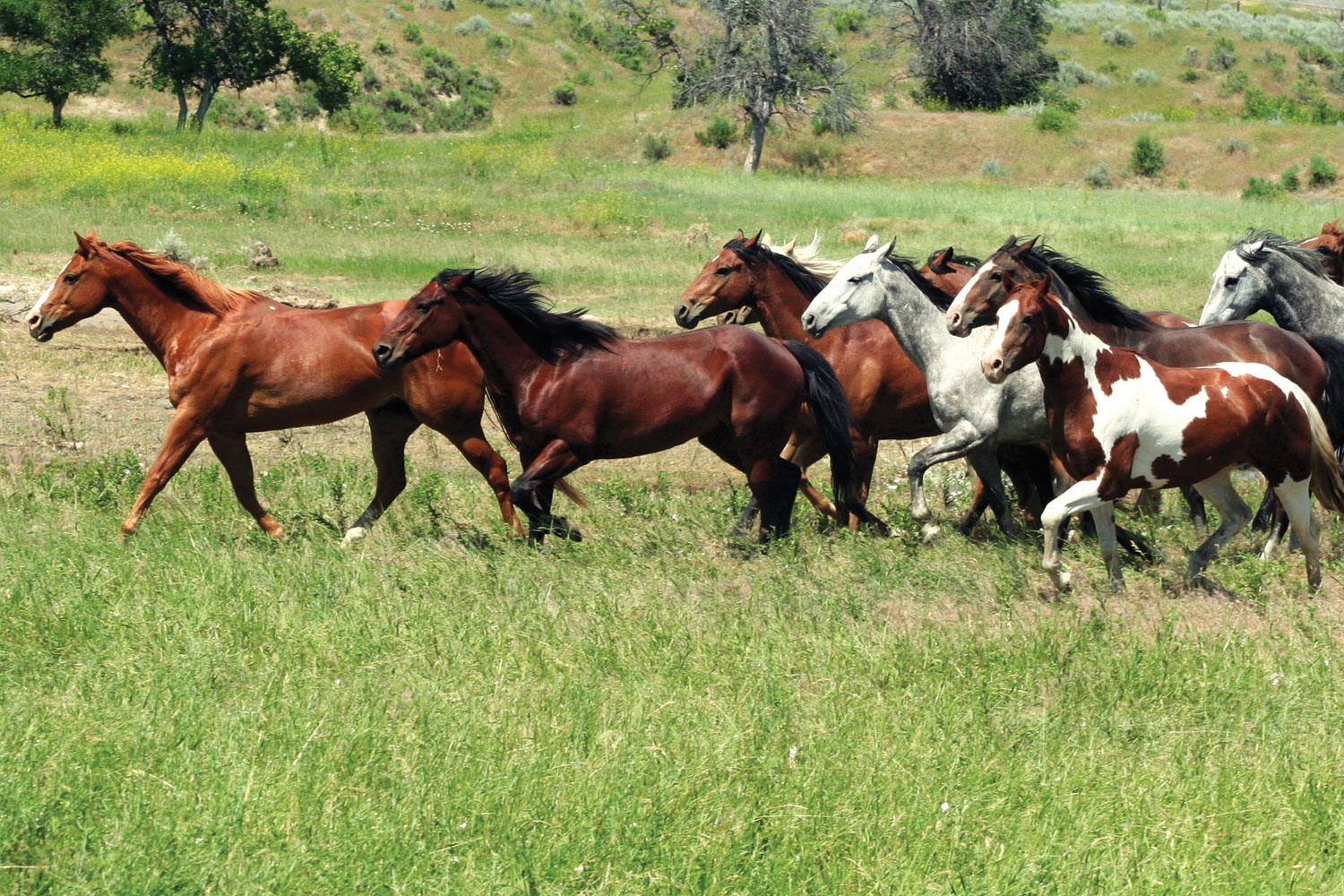 Scientific Name:
Equus ferus caballus
Lifespan:
25-30 years
The horse has evolved over the past 45 to 55 million years from a small multi-toed creature, Eohippus, into the large, single-toed animal of today. Who sleeps about 2.9 hours daily and runs at approximately 55 mph maximum sprint. 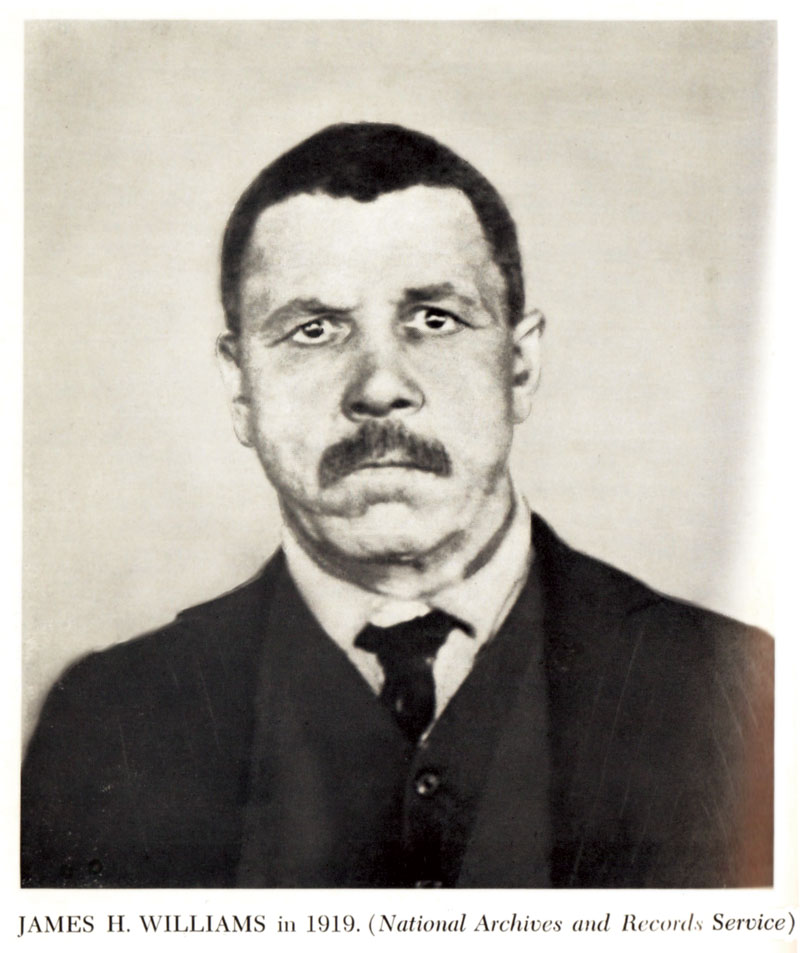 James H. Williams grew up in Rhode Island in the 1870s. His father, a sailor and a loving dad, died when James was only seven, but it was always clear that he had wanted his son to go to college. Yet James fell in love with the sea as a child, so his mother allowed him to apprentice to a merchant ship captain as soon as he could. Young James was aboard a ship in Barbados when that captain—his guardian—died, leaving the fourteen-year-old boy working aboard another ship far from home and among strangers. So began his decades as a merchant ship sailor and whaleman. Over time he established himself as a writer about life at sea, which included an important record of a ceremony involving a “poor old horse.” 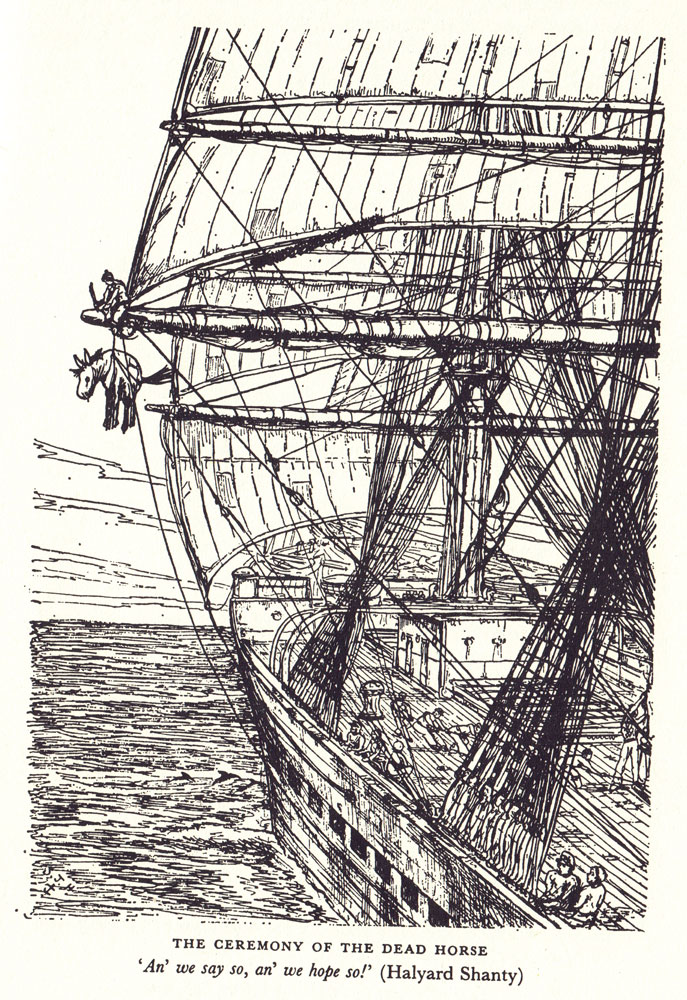 In January of 1888, at 23 years old, James Williams was in Philadelphia when he signed onto a ship bound for Calcutta. As was customary, he was given an advance in pay for signing on board as crew, but just before the ship was scheduled to depart, he learned of the death of his beloved mother. The captain refused to grant him time off to go the funeral, accusing him of planning to take off with the advance pay and claiming that the letter he showed them was forged. Williams protested and the captain called the police, who showed up and proceeded to beat him with clubs, throw him in jail, and charge him with desertion!

“So I sailed away with a heavy heart,” Williams wrote later, having never been able to pay respects to his mom.

That advance in pay, their debt to the shipowners, had to be earned back at sea before the crewmembers could begin earning money for themselves. Williams wrote that after two months out at sea, the crew’s “dead horse” was “worked up.” He described his shipmates hauling a horse up to the yardarm while singing a sea chantey with the refrain: “Oh, poor Old Man, your horse must die! And I think so; and I hope so!” Williams wrote that they then cut the halyard and “let the old ‘dead horse’ drop into the sea.”

Thankfully, this was not a real horse, but an effigy, a large puppet, that the crew likely crafted with old sailcloth, worn-out rope, a spare barrel, and maybe pieces of scrap wood to form the legs.

If the advance pay caused so much grief, then why did they accept it in the first place? Once a ship left port, the men would not be paid until the end of the voyage, which was of no help to them if they had families ashore who needed to pay bills. This was long before credit cards and online banking. The advance in pay allowed them to share money with loved ones ashore, pay bills in port, or buy clothing and supplies for the upcoming voyage.

The traditional “dead horse” ceremony marked the day that the debt to the ship was paid off. On some ships, this would be a day-long festival, a theatrical event in which the horse puppet was paraded around and auctioned. As the crew sang the dead-horse chantey, the horse was hoisted aloft to a yardarm, where they even sometimes lit the thing on fire or whizzed off a flare before cutting the line and dropping the “poor old horse” into the sea. During his years at sea, James Williams would have taken part in a few dead-horse ceremonies and sung the dead-horse chantey.

Williams was biracial, with a black father and a white mother, and personally suffered from racism both ashore and at sea. In addition to his job as a professional mariner, Williams wrote dozens of articles for an influential magazine called the Independent in which he advocated for the establishment of unions, better wages, and new laws to improve the lives and treatment of sailors.

James Williams died in 1927 after his retirement at Sailor’s Snug Harbor on Staten Island, New York. His beautifully written essays of life at sea—and its hardships—were published in 1959 in a narrative titled, Blow the Man Down: A Yankee Seaman’s Adventures Under Sail. 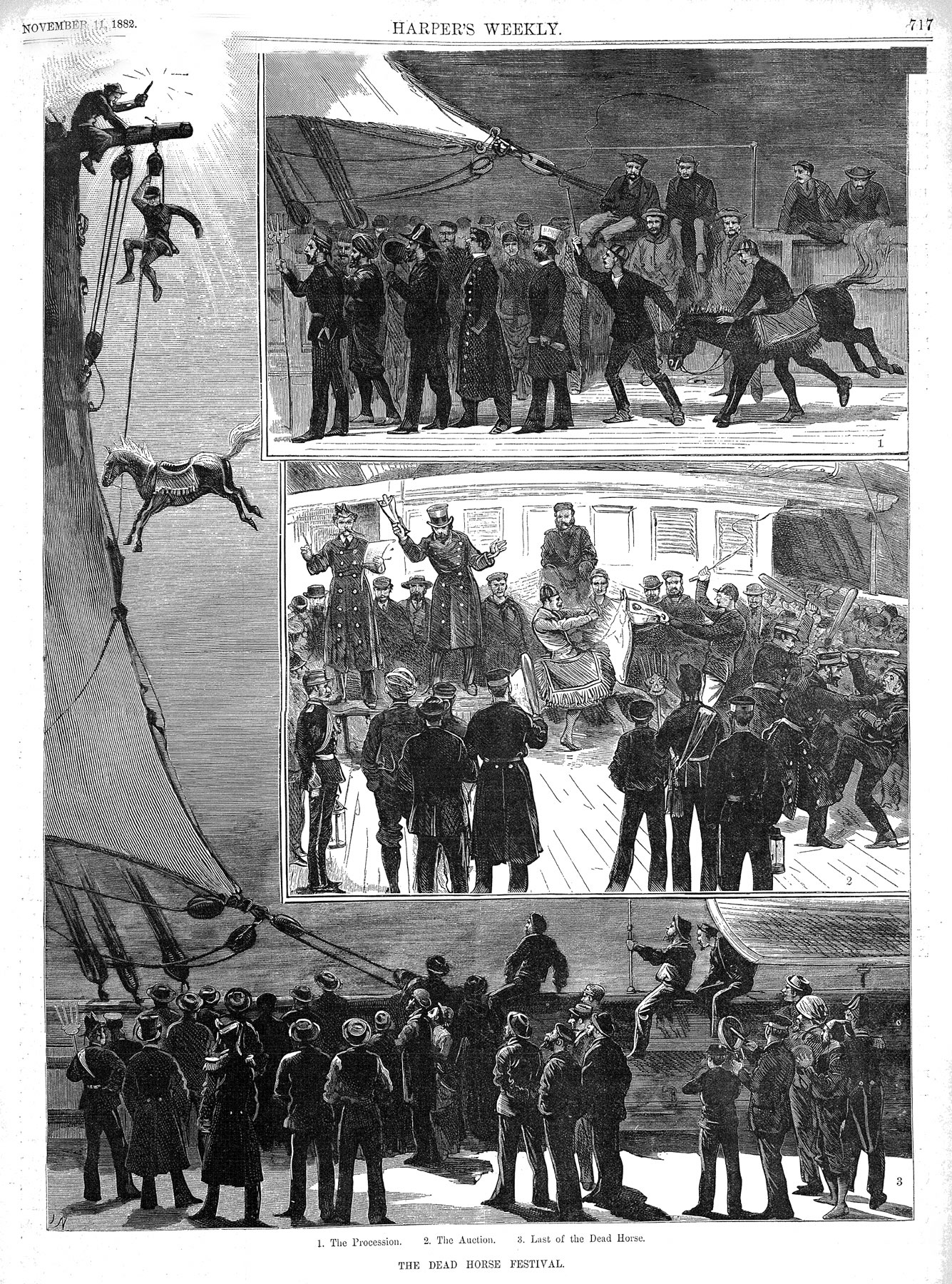 The “Dead Horse Festival” aboard an English ship bound for Australia, as illustrated in Harper’s Weekly, 11 November 1882.

The Horse at Sea 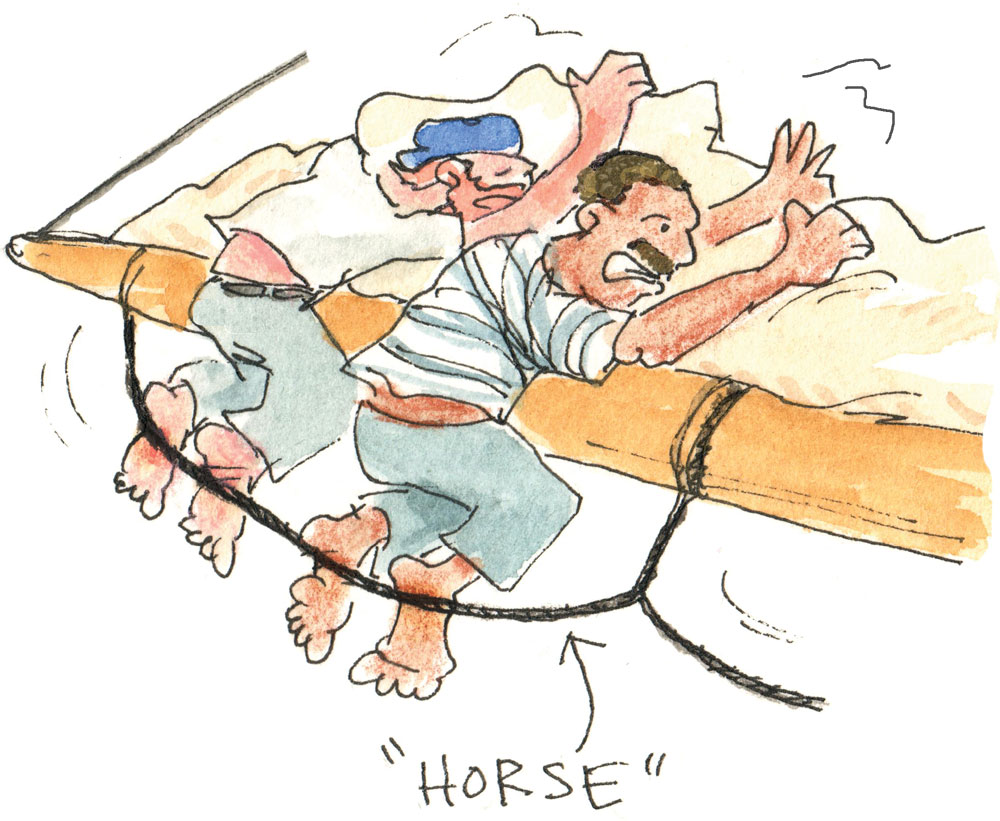 What could be more American than the image of wild horses running free across the Western plains? But the horses that we think of, like the ones in this photo, were introduced to North America by the Spanish, who sailed them across the Atlantic Ocean in ships.

So what does this have to do with maritime history? Well, the dead-horse ceremony that James Williams experienced at sea was just one use of the word “horse” in a sailor’s vocabulary. James and his shipmates would have known a half dozen or so other references to horses on merchant ships of the 1800s, none of which are all that favorable if you’re fond of horses. Here are a few examples: 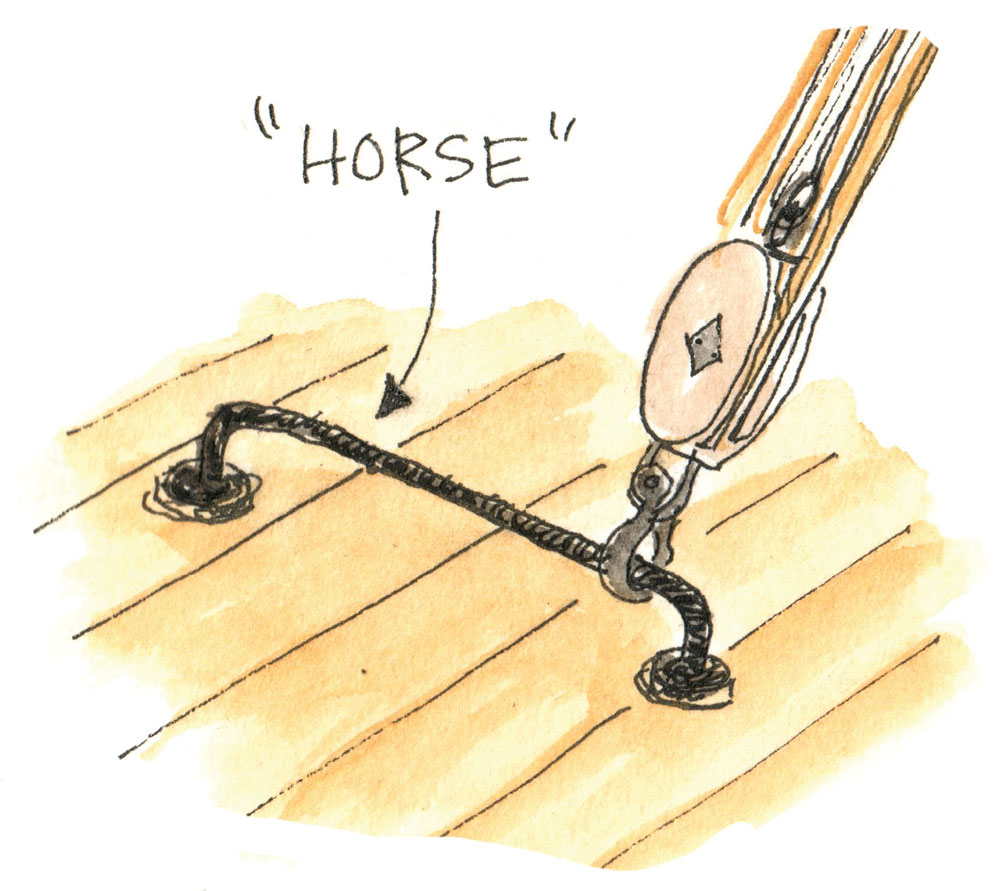 The iron bar on deck, used as a traveler for a sail’s sheet, was called a “horse.” The footrope that Williams and his fellow sailors used to stand on and balance themselves when working on a sail out on a yard was also called a “horse.”

White crests of foam on the tops of waves are called “horses” and a type of cirrus cloud are known as “mare’s tales.”

When the salted beef that was fed to the crew was really tough, the sailors would call it “salt horse.” It’s possible that there may indeed have been some ships that fed horsemeat to their crews, but food historians believe that was uncommon. 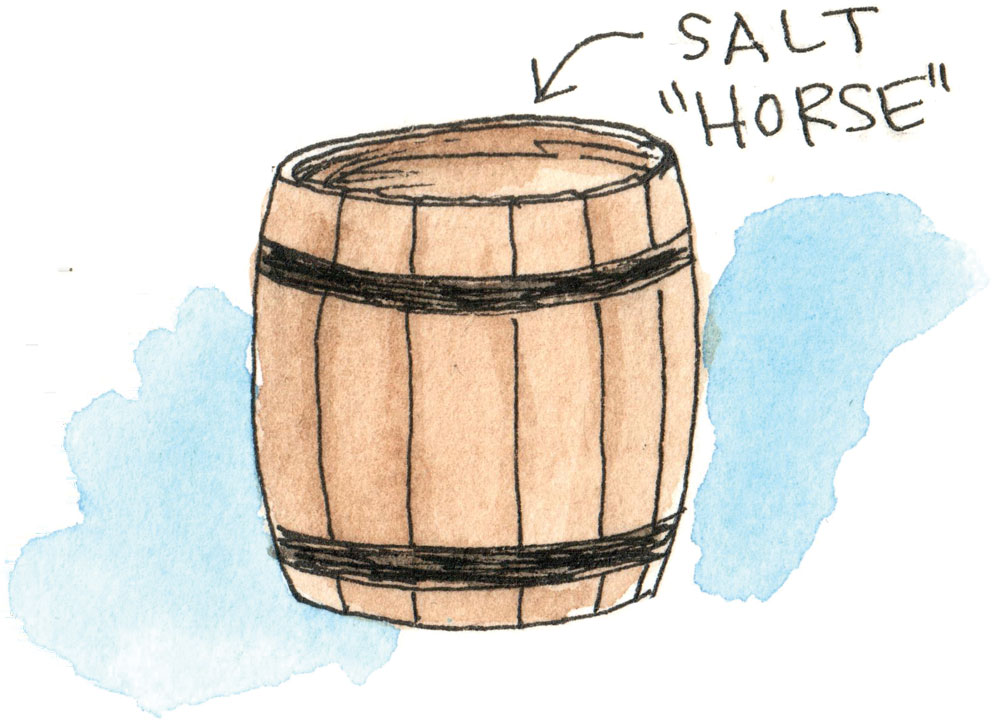 The “horse latitudes” are another phrase for the doldrums, the regions around 30° North and 30° South, in which there can be periods of long calms at sea. Some declare, dubiously, that the derivation for this phrase is that ships once threw horses overboard at these latitudes, because the animals had died from the lack of freshwater or even that the sailors were forced to sacrifice the horses to reduce the ship’s weight. Some also contend that somewhere in the horse latitudes or the dead-horse festival is the derivation for the expression “flog a dead horse.”