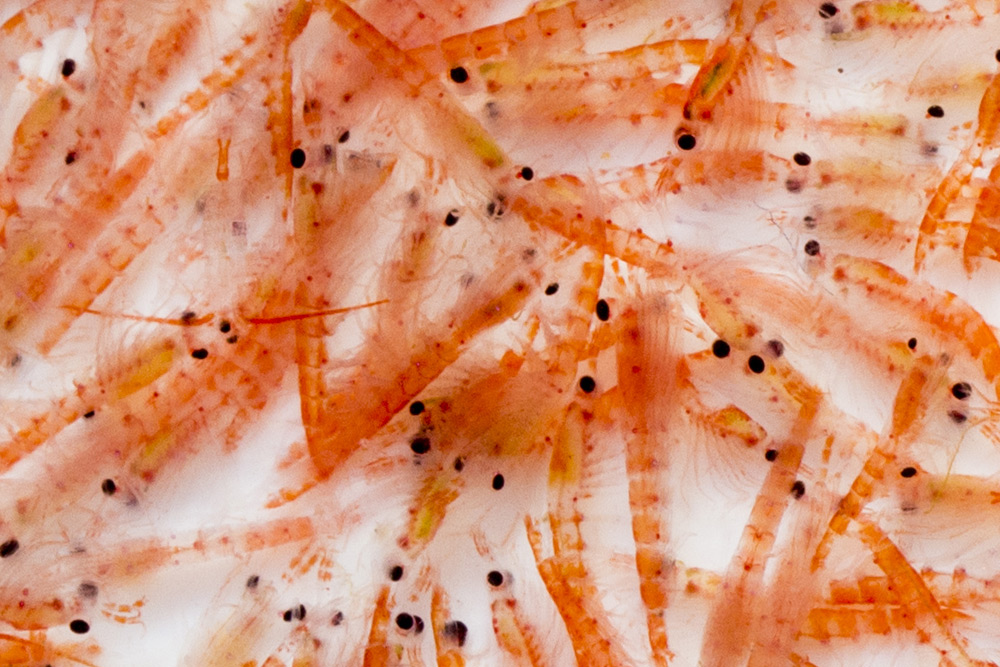 Scientific Name:
Euphausia Superba
Krill can grow up to 2.5 inches long. Females can produce over 25,000 eggs in one year. 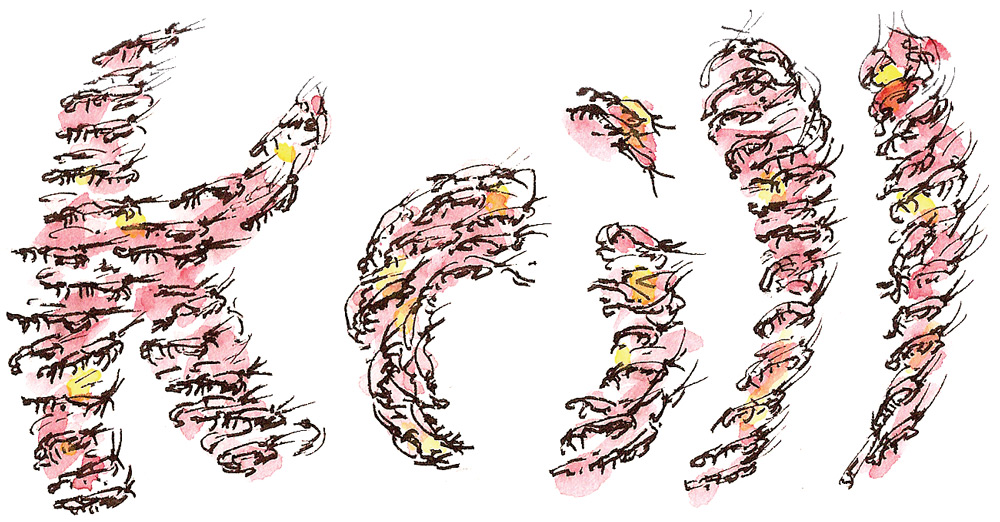 One day, over 175 years ago, a young Charles Darwin peered over the side of his sailing ship, HMS Beagle. The ship was sailing off Tierra del Fuego, the blustery southern tip of Argentina. Darwin’s eyes widened when he saw long bands of some sort of crimson-colored soup covering the surface of the sea.

He wrote later in his account of the voyage:

I have seen narrow lines of water of a bright red colour, from the number of crustacea, which somewhat resemble in form large prawns. The sealers call them whale-food. Whether whales feed on them I do not know; but terns, cormorants, and immense herds of great unwieldy seals derive, on some parts of the coast, their chief sustenance from these swimming crabs.

So, what was he looking at? Darwin was likely sailing through a patch of krill, or euphausiids, which look similar to crabs and shrimps (prawns), but are recognized today as their own kind of animal. The Antarctic krill is the species most commonly found in the area where Darwin sailed, but the word “krill” wasn’t in common English usage back then. It’s actually a Norwegian word, meaning “very small fry of fish,” and, according to the krill expert William Hamner, once also meant “tiny creepy-crawly things.”

Darwin’s shipmates were indeed correct when they said that the creatures were food for whales. Even though individual Antarctic krill, the largest of their kind, do not grow larger than an average person’s pinky, the whales of the Southern Ocean—notably the blue, fin, and right whale—dine on them almost exclusively. Whales swim open-mouthed through fields of these critters, gulping millions at one pass.

In the Southern Ocean mariners have sailed through dense swarms of krill so vast that they covered the area of 280 square miles. That’s larger than the entire city of Chicago! Ocean currents move these little animals around, but krill also manage to swim together like schooling fish, perhaps because it helps more individuals survive when predators approach, and maybe it helps them when finding their own food, which is mostly microscopic plants.

In winter, krill eat algae and other tiny organisms that live under the ice. When swimming in the open ocean, they collect both near the surface and also hundreds of feet below. Krill use their forward sets of legs to feed and their back limbs to swim, adjusting their tail fins like a rudder to steer. Like other crustaceans, such as lobster, krill have a rigid outer skeleton, so they need to shed or molt their shells in order to grow. They can shed these exoskeletons on the spot when they need to distract predators.

Because Antarctic krill live in such massive groups, they not only provide food for whales, seals, fish, squid, and birds, but humans have also developed a large industrial fishery to net them by the ton. Krill are occasionally served as food in countries such as Japan, but, more commonly, catches are sold to feed farm animals or fish raised in aquaculture. By some estimates, considering the total weight of all the living members of their species, Antarctic krill are the most populous animals on Earth. Certainly that would have impressed Charles Darwin, who would be celebrating his 200th birthday this year. 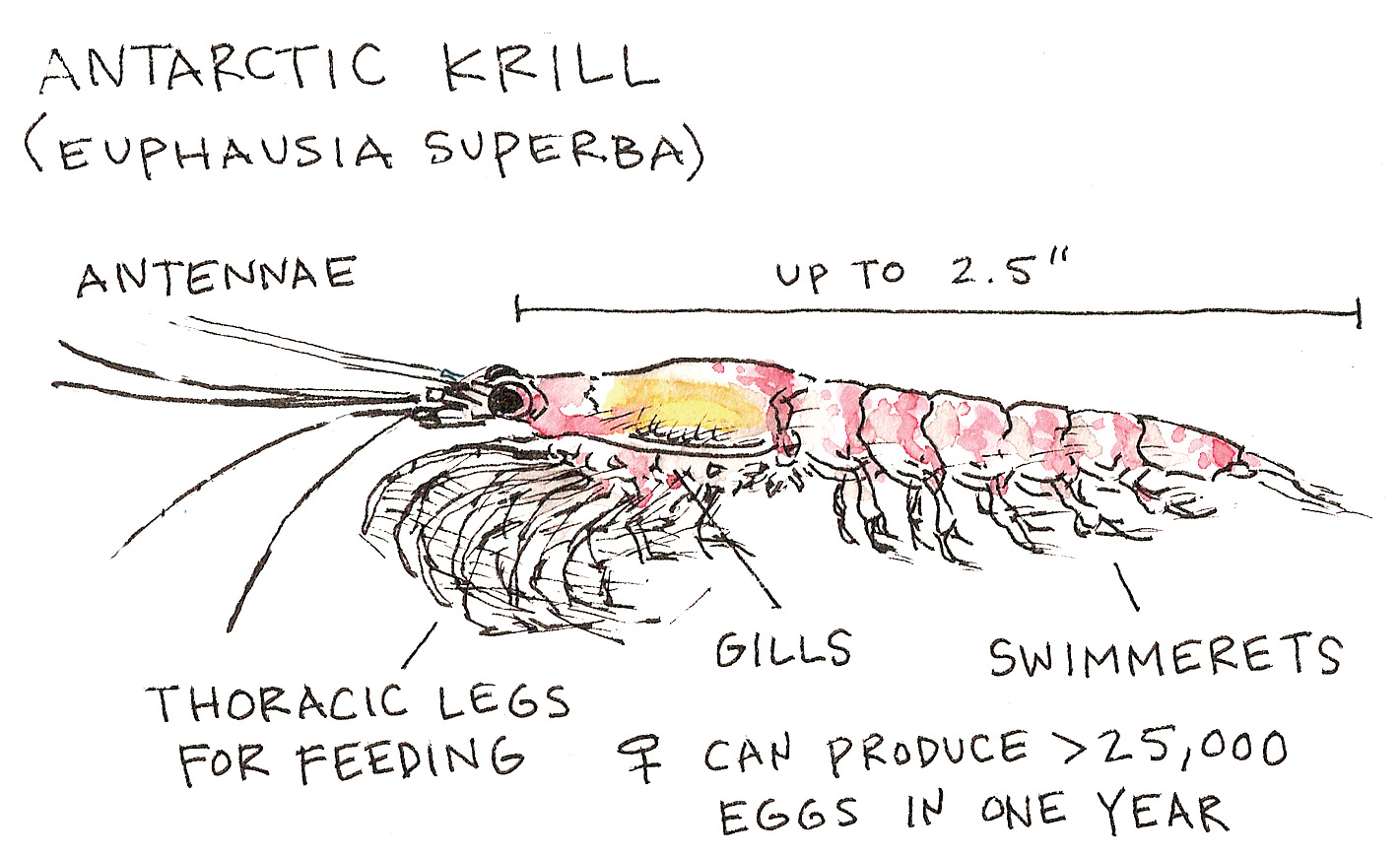