Scientific Name:
Torpedo Panthera
These rays can grow more than 3 feet long. Their electric organs are under the skin on both dorsal sides. 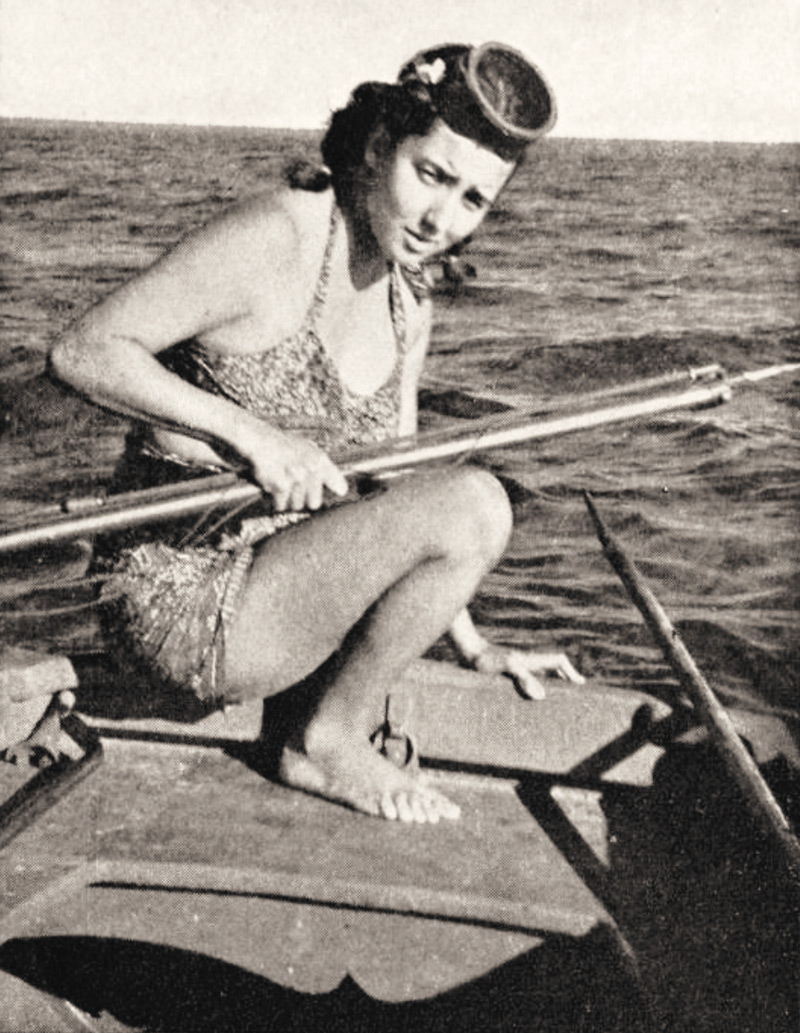 Eugenie Clark was a pioneer of marine biology, especially in the study of reef fish and sharks in their natural habitats. The daughter of a Japanese mother and an American father, Clark grew up in New York City in the 1920s and ’30s, fascinated from the earliest age by fish in aquaria. When she grew older, Clark learned how to spearfish out at sea, as well as to throw traditional fishing nets, and to collect and observe fish around coral reefs.

In the 1940s, personal scuba technology was still being developed; she conducted her field studies by doing what was then called “underwater goggling.” When Clark first began her field research in southern California, then in Paulau and other islands in the southwestern Pacific, she focused on identification and analysis of poisonous fish, such as pufferfish. Clark was soon featured regularly in Natural History and National Geographic magazines. Her first book, Lady with a Spear, was the first popular memoir by a female marine biologist when it came out in 1951. It went on to become an international bestseller. 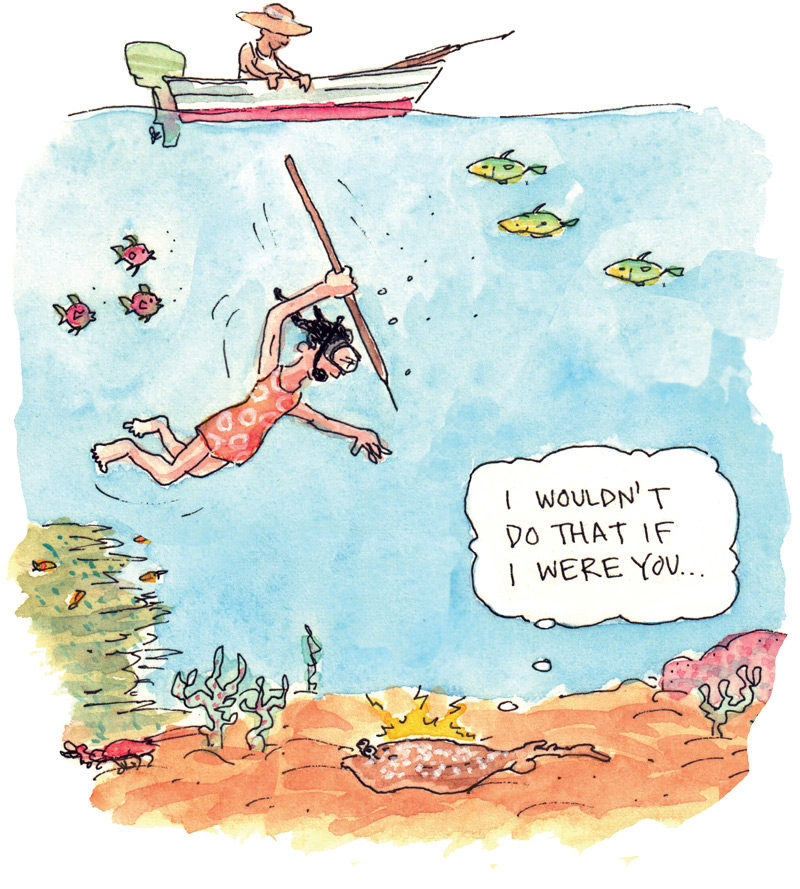 One of her most compelling early adventures occurred one day in 1950 when she was spearfishing in the Red Sea as part of a year-long study of reef fish, working out of a marine lab in Egypt. Clark was snorkeling at the surface in Sharks’ Bay when she saw a large, flat, motionless fish at the bottom. Using the weight of her heavy spear like an anchor, she swam down toward what she hoped, she wrote later, was “one of the poisonous sting rays I was particularly seeking.” Then, “just as I was about to thrust my spear in the fish’s back, I recognized the species. It was a ray all right—an electric ray! My spear would have been a fine conductor if the fish and I had connected.”

Clark nearly zapped herself with an electric ray. Biologists have identified at least 52 species of electric ray around the world, classified in four different families with lovely common and scientific names:
the numbfishes (Narcinidae), the sleeper rays (Narkidae), the coffin fishes (Hypnidae), and the torpedo rays (Torpedinidae). Clark didn’t tell her reader which species she nearly stabbed that day, but one of the more commonly found electric rays in the Red Sea is the leopard electric ray, first identified by the Western scientific community in the 1830s.

Electric rays have been observed in the Middle East and the Mediterranean for thousands of years, described in accounts by Pliny and Aristotle. Claudian, a Roman poet from the 4th century, wrote (in modern translation): “But nature has armed its flanks with a numbing poison and mingled with its marrow chill to freeze all living creatures, hiding as it were its own winter in its heart…all [fish] that have touched it lie benumbed.” Electric rays, often called torpedoes, appear on ancient pottery and in mosaics. In early Greece, patients with headaches were prescribed live electric rays to touch, and cooked electric rays were served to relieve patients with other maladies, such as arthritis. Beginning in the 1700s, naturalists began using these rays, along with electric eels and electric catfish, to study the foundations of electricity. In more recent decades, electrified muscles in fish have helped with the understanding of the tiny electric pulses in human bodies, those that travel through our nerves. The name of the modern underwater missile, the torpedo, is derived from this fish, which got its name from the Latin word “torpor,” meaning paralyzing or numbing.

A torpedo electric ray on a mosaic of finfish, sharks, and cephalopods in Pompeii, ca. 1000 BCE.

Electric rays range in size, some species growing as large as six feet long. They tend to be more sluggish and more drably colored than other rays, spending their “energy” on concealment, rather than speed. In the wild, electric rays use their charged muscles to deter their predators and stun their prey—even from a short distance away—hunting bottom fish and invertebrates. Different species of electric rays have different amounts of voltage, which they pulse in short bursts from specialized kidney-shaped muscles. Some of the larger types send out a pop that’s enough voltage to light a couple of lamps: they can shock fishers into dropping their lines or nets. If Clark had connected with that electric ray with her metal spear, the shock might’ve knocked her backwards or even have been enough to make her drop her gear.

After her (almost) shocking adventure in the Red Sea and her successful book, Eugenie Clark became most famous for her study of sharks around the world. She became a master scuba diver and a professor at the University of Maryland. She also founded and directed the Mote Marine Laboratory in Sarasota, Florida. At the age of 92, she returned to the Red Sea for a final dive after many years of research visits and conservation activism in the region. She didn’t bring her spear this time. Eugenie Clark died only a few months later in 2015. 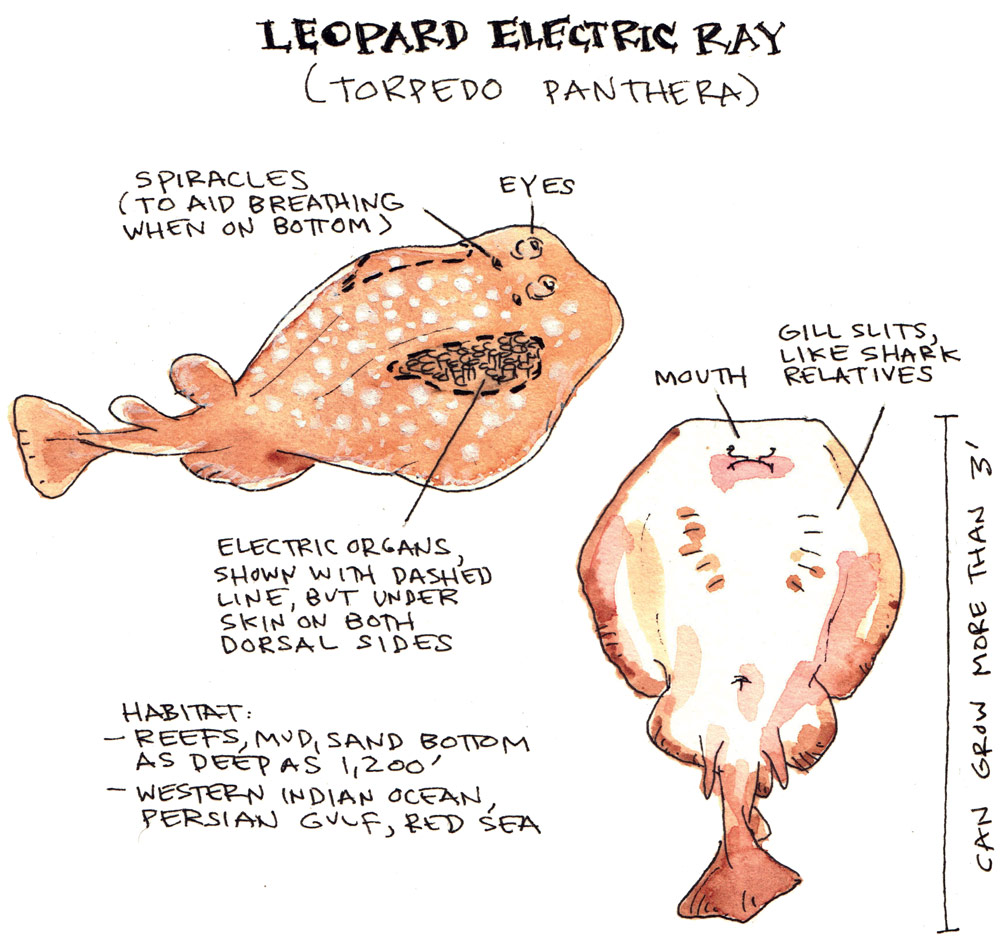