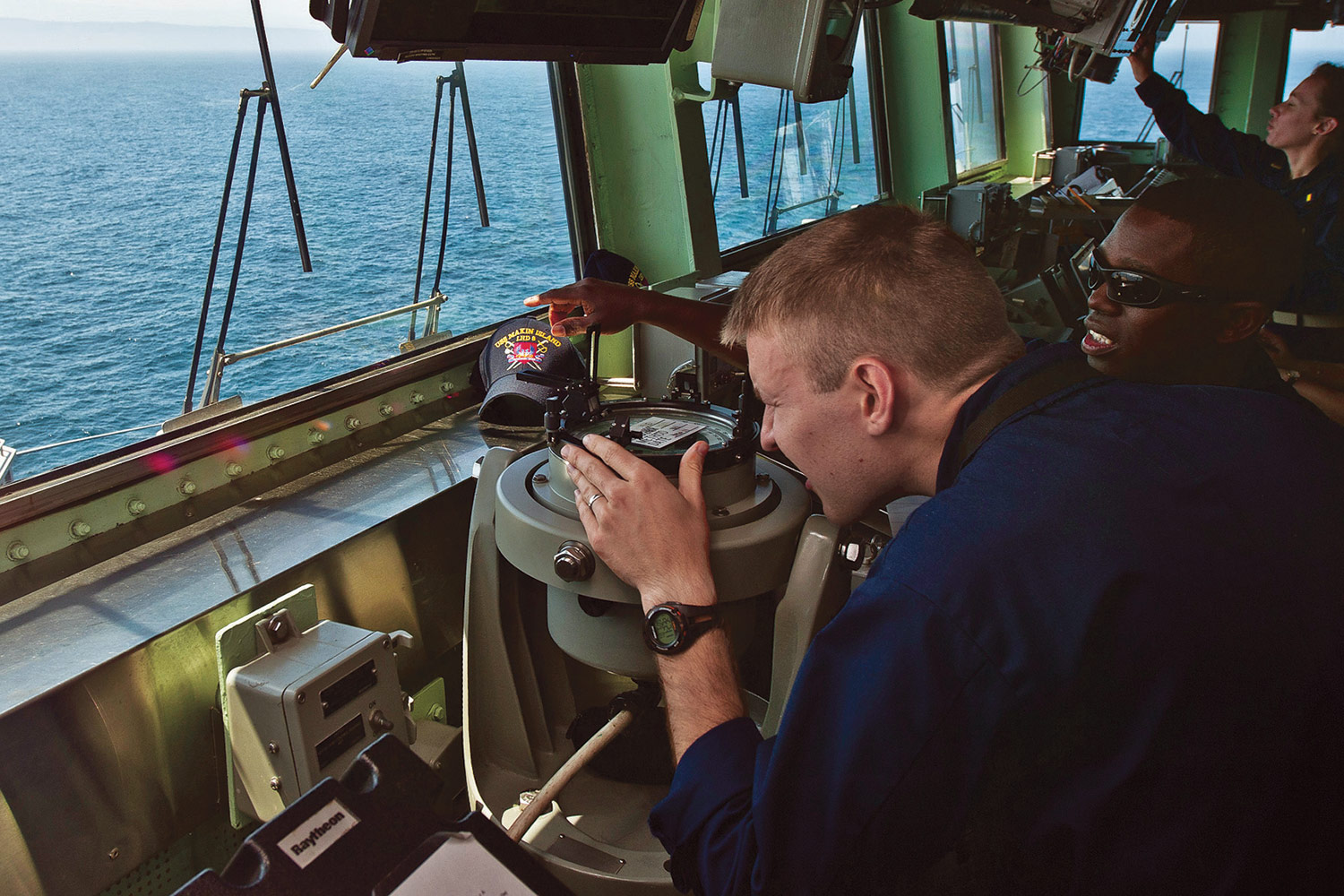 In the 21st century, most people would agree that we live in an age of technology, but this is actually nothing new. Technology has always been around—it’s the application of science and invention to deal with practical real-life problems.

Early humans who used stones for cutting were using technology, and by the 15th century, technology solved the problem of how people on ships and boats could figure out what direction they were sailing in and, perhaps even more importantly, what direction they needed to go to get back home. Before that time, sailors rarely ventured out of sight of land and instead relied on visible landmarks to get from place to place. This limited traders and navies to routes close to shore, but the invention of the compass changed all that. No one is exactly sure who invented it (probably the Chinese, but the Greeks also understood about magnetism in ancient times), but the magnetic compass as a shipboard navigational instrument first shows up in the historical record in the early 1400s, when the Chinese explorer Zheng He (1371-1435) used them to lead a fleet of ships on seven major ocean voyages throughout Asia, eastern Africa, and the Middle East.

The magnetic compass contains a magnetic element that aligns itself with the earth’s magnetic field. Think of the earth as a big magnet. It has two magnetic poles, oriented north and south, and close to the geographic North and South Poles. When a magnetic element (such as the mineral lodestone or a ferrous metal that has been magnetized) is allowed to float freely, it will effectively point north and south, thus showing you which direction you are going in relation to that axis.

The earth’s North and South Poles are close to, but not perfectly aligned with, its magnetic poles. The difference between them is expressed as an angle called declination (on nautical charts, this is called variation). Why are there two North Poles and two South Poles? The geographic poles, called “True North” and “True South,” are aligned with the earth’s rotational axis, the imaginary line running through the earth around which it spins. To make things even more complicated, the earth’s magnetic field shifts a little bit every year, making it impossible to mark its poles permanently on maps, globes, and charts. Cartographers (mapmakers) take care of this problem by printing a “Compass Rose” on charts and maps, which shows the difference between true and magnetic north and notes the change in declination each year.

The magnetic compass has come a long way since the sailing days of Zheng He, and some people might even argue that we don’t need them anymore now that we have satellites in space sending signals to GPS units. GPS is a great advance in navigational technology, but only a fool would go to sea with the expectation that batteries will never run down, signals will always make it to their GPS unit, and their electronic instruments will always work perfectly. A magnetic compass is simple and relatively inexpensive, never needs batteries, and easy (and fun!) to use. You can even make one yourself with just a few materials… 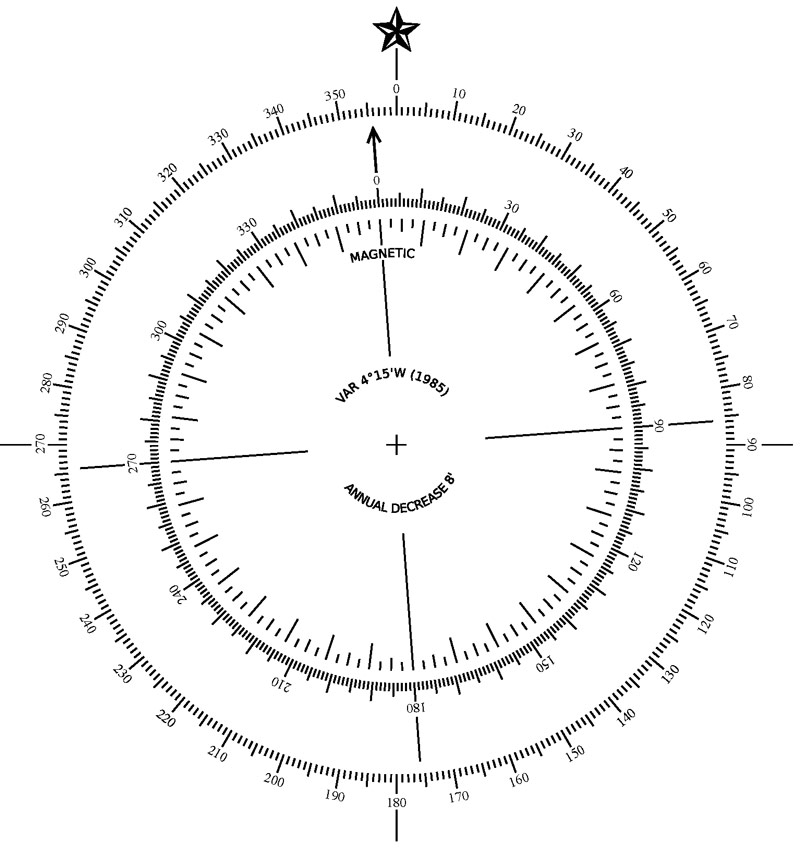 The outer circle points to True North; the inner circle shows degrees in magnetic. At the center, the cartographer has noted the difference between them and how much it changes annually.

Featured photo: Before US Navy officers learn how to use high-tech electronic navigation systems, they must first learn how to use a compass to navigate at sea. In this photo, Ensign Jason Waddell takes a compass bearing aboard the amphibious assault ship USS Makin Island off the coast of Southern California in September, 2011.

How to Make a Magnetic Compass…in your kitchen! 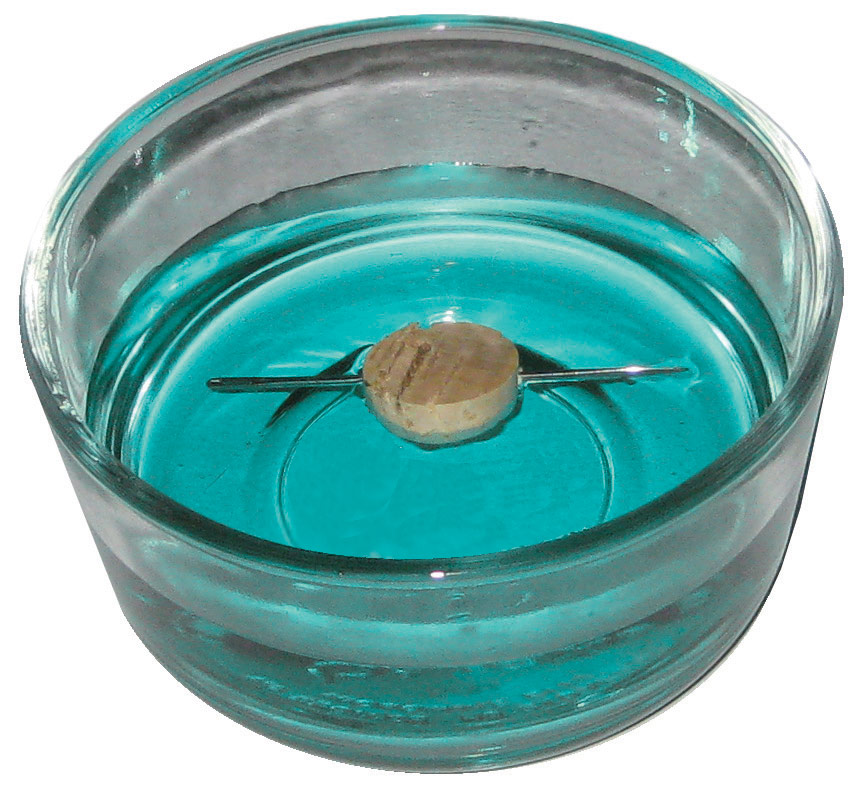 Step 1  Place the needle on a flat surface and rub the magnet along its length several times, always in one direction (not back and forth)—this magnetizes the needle.

Step 2  Slice off the end of the cork so that you have a circular piece about 1/4-inch thick.

Step 3  Use the pliers to poke the needle through the side of the cork so that there is approximately the same amount sticking out of each end.

Step 4  Place the cork and needle in the bowl of water, and watch as it turns so that the needle is pointing towards the North Pole (unless you live in the southern hemisphere, in which case it would point towards the South Pole).

Next would be Intercardinal Points (Northeast, Southeast, Southwest, and Northwest). This compass card shows 32 points, each worth 111/4 degrees, which adds up to 360. Sailors learn how to “box the compass” by being able to recite from memory all 32 points of the compass in order. Try it!