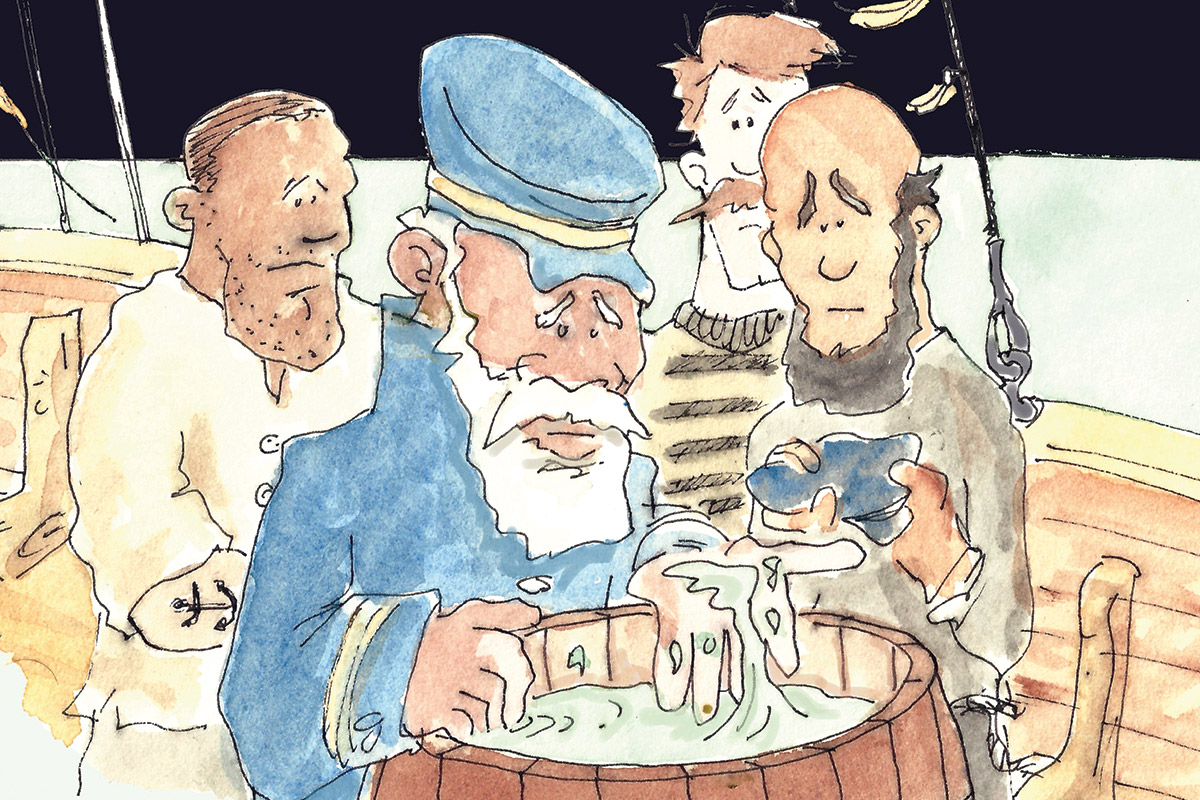 In the early evening of 27 July 1854, the American clipper ship Shooting Star was sailing toward Java, Indonesia, from the southwest. The sailors on deck noticed that the ocean’s surface had become entirely white. 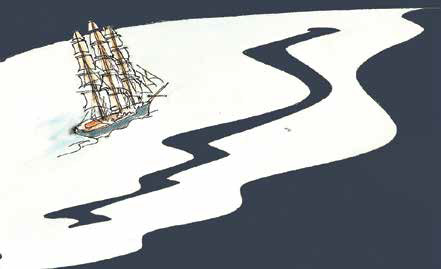 The men summoned their captain, W. E. King-man, who, upon looking over the rail and seeing the odd color of the water, decided to stop the ship to take a sounding in case they were way off course and sailing over dangerous, shallow water. Satisfied this was not the case, he continued sailing through what he later described in a letter as “a plain covered with snow.”

Kingman measured the slick of milky-looking water to be some twenty-three nautical miles long, interrupted by only a half-mile dark strip in the center. In all his years at sea he had seen “nothing that would compare with this in extent or whiteness.” He had his crew fill a sixty-gallon tub with the glowing seawater and, in part by using the magnifying glass of his sextant, Kingman identified among the glow what we’d describe today as a dense bloom of a variety of clear jelly-like zooplankton, some circular and some thin, like long hairs. 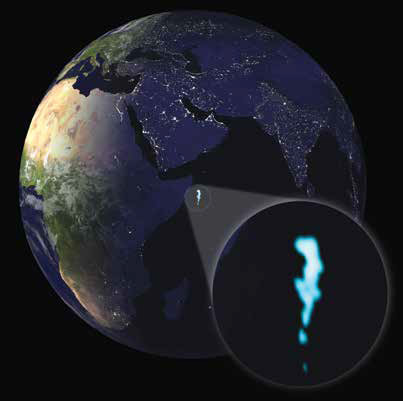 Milky seas off the coast of Somalia, as projected on this image made from earth atlas information and milky-sea data collected from satellites and confirmed by observers aboard ships in the area. The bioluminescent feature (lower right) is to scale, but it has been colored and enhanced, so it appears much brighter than it would in nature.

If you’re thinking this was bioluminescence—-the microscopic marine organisms well known for making seawater glow at night when disturbed—-you would be right. But the phenomenon the crew of the Shooting Star witnessed was an exceptionally rare event, in which the surface was completely glowing without any agitating motion. What they saw that night was full coverage of the surface, opaque and consistent, as if lit up from below. This was not only flickering blue-green light from the organisms Kingman could see, but also light created by something far more numerous and far smaller than what Kingman could identify, even with some magnification. The crew of the Shooting Star had described in 1854 what has since been classified as a “milky sea.”
In the 1980s, scientists on a research cruise sampling in the Arabian Sea powered through milky seas and identified the likely cause of this constant glow: bioluminescent microscopic bacteria by the gazillion! In 1993 two British scientists took up the riddle by looking into historical records from mariners. They found a few descrip-tions from sailing ships in the 1800s, of which Captain Kingman’s was one of the most detailed. Then they located at least 235 reports of other milky seas since 1915, most commonly appearing in the Arabian Sea. The second most common area was off Indonesia, where Kingman and the Shooting Star had made its observation.

Inspired by these two studies, a small group of scientists based in Monterey, California, went back into the records of satellite images. They found the day and location from an account of milky seas in 1995 by the captain of a British me-chant ship, the Lima. He was steaming through the waters of the Arabian Sea when the ship was “completely surrounded by a sea of milky-white color with a fairly uniform luminescence…from horizon to horizon.” Using special satellite instruments capable of sensing extremely low levels of light, the scientists in Monterey found a bright patch in the image that matched this massive bioluminescent glow. The milky seas blanketed more than 4,375 square nautical miles. The scientists believe this, too, was primarily formed by a bloom of bacteria that had colonized algae. 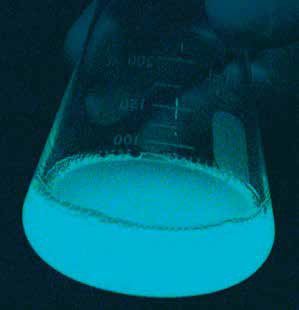 If you’ve been lucky to see bioluminescence at sea, or even if you’ve seen the recent Disney movie Moana (2016), you’ve experienced some of the joyous and inspiring magic of how ocean organ-isms make light. But for sailors in the 1800s, bioluminescence, or phosphorescence, as they used to call it, didn’t always suggest the beautiful magic of the sea—-especially when the pale green-blue light suddenly blanketed the entire surface of the ocean. Both Herman Melville and Jules Verne wrote about milky seas in their novels. Neither author wrote of it as simply beautiful. Milky seas were more about the mystery of its source and the alarm and confusion it caused for sailors.

For his part, on the appropriately-named Shooting Star, Captain Kingman wrote: “The scene was one of awful grandeur, the sea having turned to phosphorous, and the heavens being hung in blackness, and the stars going out, seemed to indicate that all nature was preparing for that last grand conflagration which we are taught to believe is to annihilate this material world.”

To read more about bioluminescence or to see other entries in “Animals in Sea History,” or educators.mysticseaport.org.