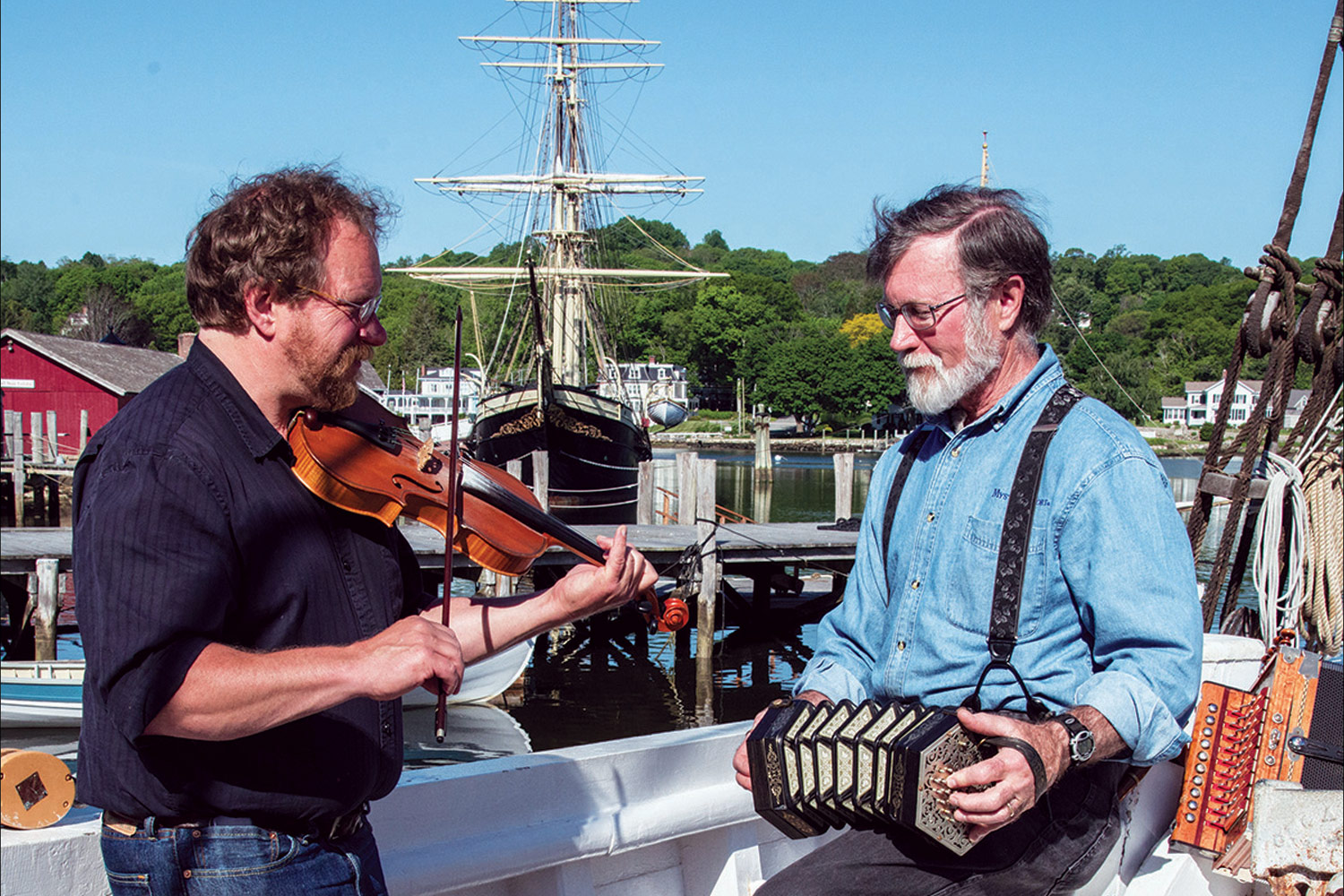 In March of 1794, the United States Congress passed the “Act to provide a Naval Armament,” authorizing the first warships for the US Navy. Included in the details were specifications on crew size, pay, and daily food rations. There were crew positions you might expect, like captain and lieutenants, sailmakers, seamen, and a ship’s surgeon, but the law also stipulated that each ship’s crew would include “one drum [and] one fife.” 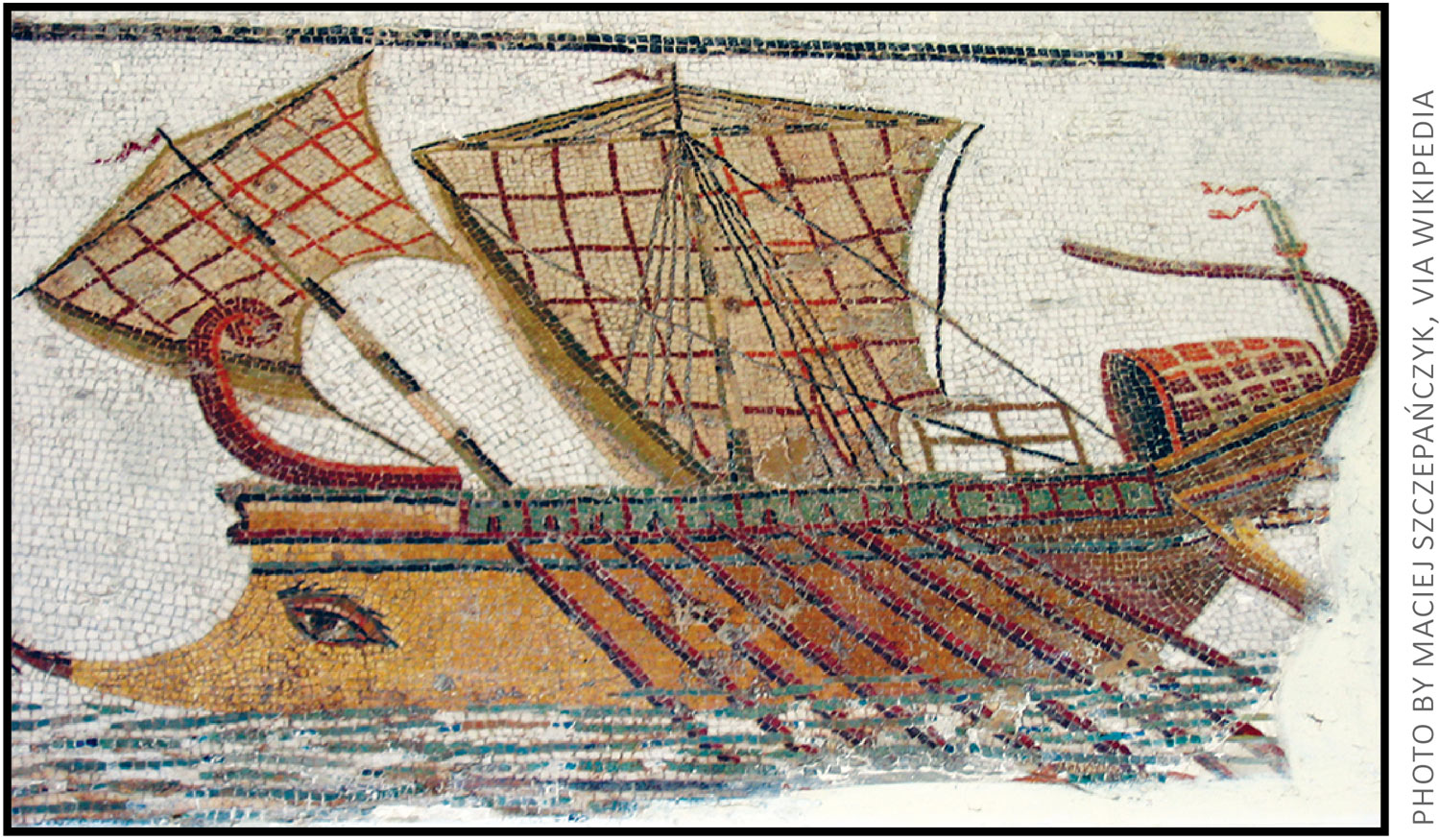 With three rows of oarsmen, you can see why keeping a steady rhythm was crucial in the operation of the ancient Roman trireme.

Music has always been important aboard working vessels, both in the military and in commercial ships. In ancient Egyptian drawings found in the tomb of Seshemnefer at Giza, there is an image of a musician playing a clarinet-like instrument in the bow of a boat. The Vikings, Chinese, and Greek mariners from centuries ago all used musicians aboard their vessels, presumably to keep the beat for oarsmen and to rally their crews into battle.

The songs that were sung aboard 18th and 19th century sailing ships are most likely the music you might have heard before, from sea chanteys1 to ballads that tell a story. Sea chanteys are work songs, used to coordinate sailors working in unison to get a job done. Even the biggest ships from that era were operated by hand, with no machinery to do the heavy work. In addition to the huge sails that had to be set and furled, other tasks such as weighing anchor or working the pumps—work that was long, hard, and monotonous—were made more efficient and tolerable with the use of music and song. 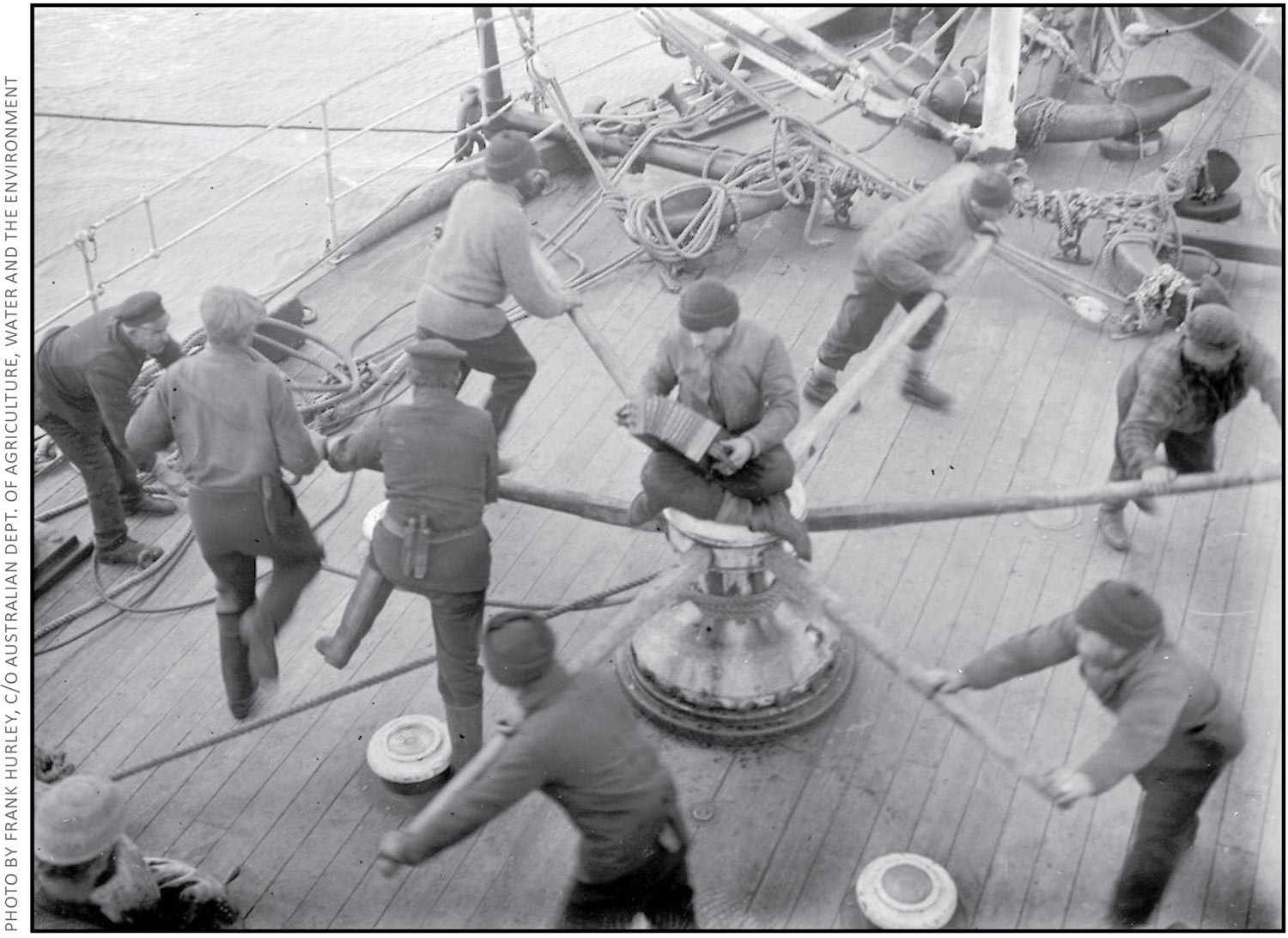 Aboard the British barque Discovery 1929/30, a chanteyman with his concertina sits atop the capstan keeping the beat for his shipmates as they raise the massive foreyard aloft. A good chanteyman was considered a very valuable member of the crew.

There are different kinds of chanteys that were developed for different kinds of work. For jobs that didn’t last long but required moments when the whole group needed to pull, push, or drag together, there were “sweating-up chants” or “bunting chanteys,” which were call-and-response songs: the chanteyman would shout a line or two of the verse, and the crew would call out short lines when they had to haul at once. Short haul songs (also called short drag chanteys) were for jobs that took a little longer and allowed time for a melody and narrative to develop. A good chanteyman might change the lyrics on the fly to make his shipmates laugh or move faster or stronger. 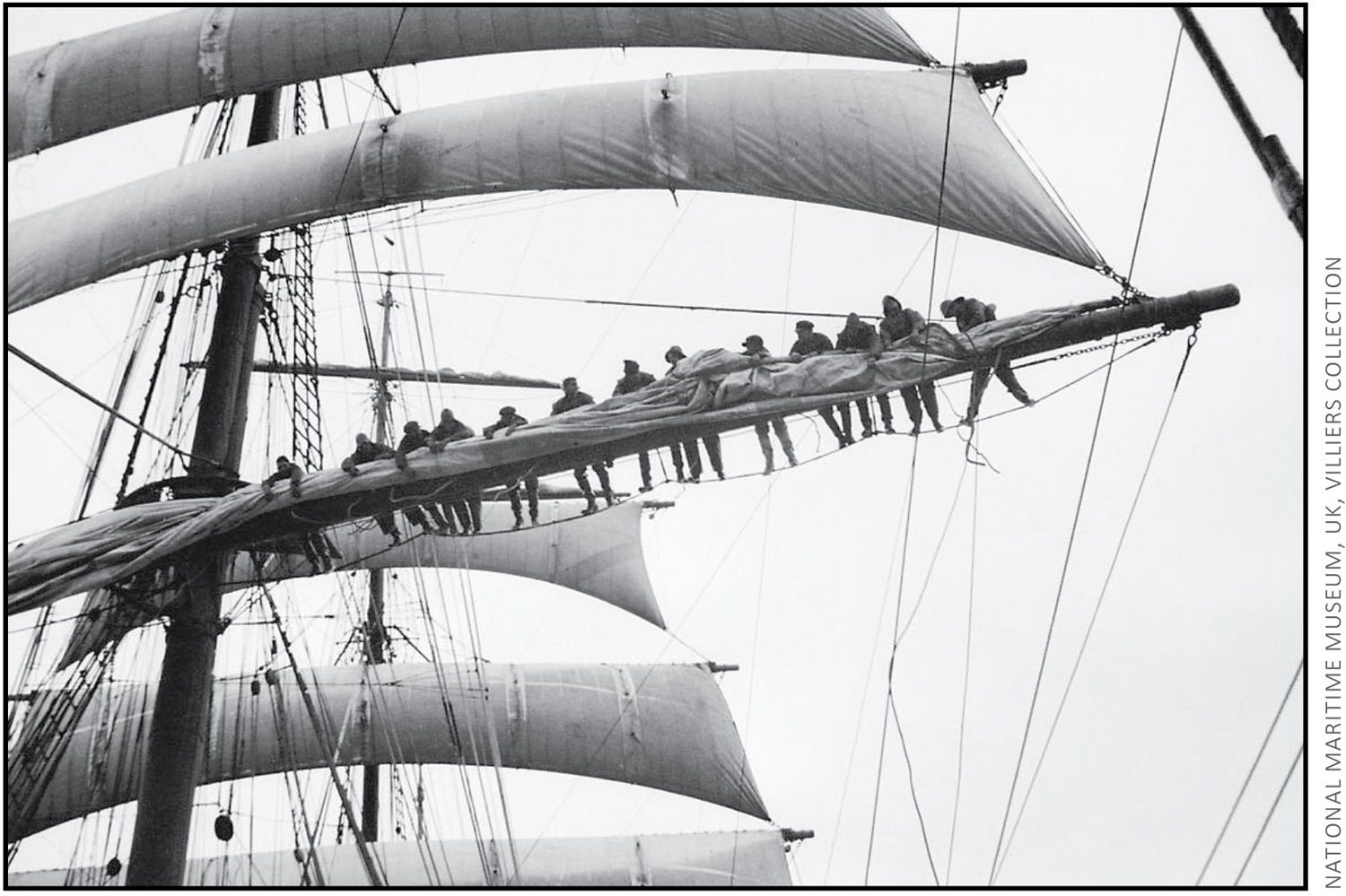 It took thirteen men working in unison to furl just half the mainsail aboard the four-masted barque Parma.

There are lots of other types of songs sailors sang aboard ships and not all were for work. “Forebitters” were ballads sung for pleasure, usually while the sailors were off watch and just hanging out. Like most traditional folk music, the lyrics might change from ship to ship, or from crew to crew. They generally concerned life at sea, loved ones and women ashore, gripes about the work and rules they lived under, and jobs on land the sailors were sure were better than theirs, among other topics. It wasn’t all singing: fiddles, flutes or fifes, banjos, and the concertina (similar to an accordion) were commonly found aboard ships.

During their heyday, sea chanteys were not sung ashore, as they were the work songs of the sailor and held special meaning just to them. As a working tool, their use came to an end when the sailing ship was replaced by the engine-powered vessel in the 20th century. These traditions are kept alive by musicians, scholars, and people who enjoy the stories the songs tell and the fun times to be had with call-and-response chanteys. Most maritime museums across the country sponsor sea music performances and exhibitions throughout the year. During Mystic Seaport Museum’s annual Sea Music Festival in June, while musicians and groups perform for the crowds outside, scholars gather indoors for the Music of the Sea Seminar, where they share current research on this rich and complex subject.

1 Also commonly spelled as chanty, shanty, or shantey. Much of the information for this article is from ‘Symbolic History’ and Sailors: Image Development Through Song at Sea by Peter McCracken, master’s thesis, East Carolina University, March 1999.