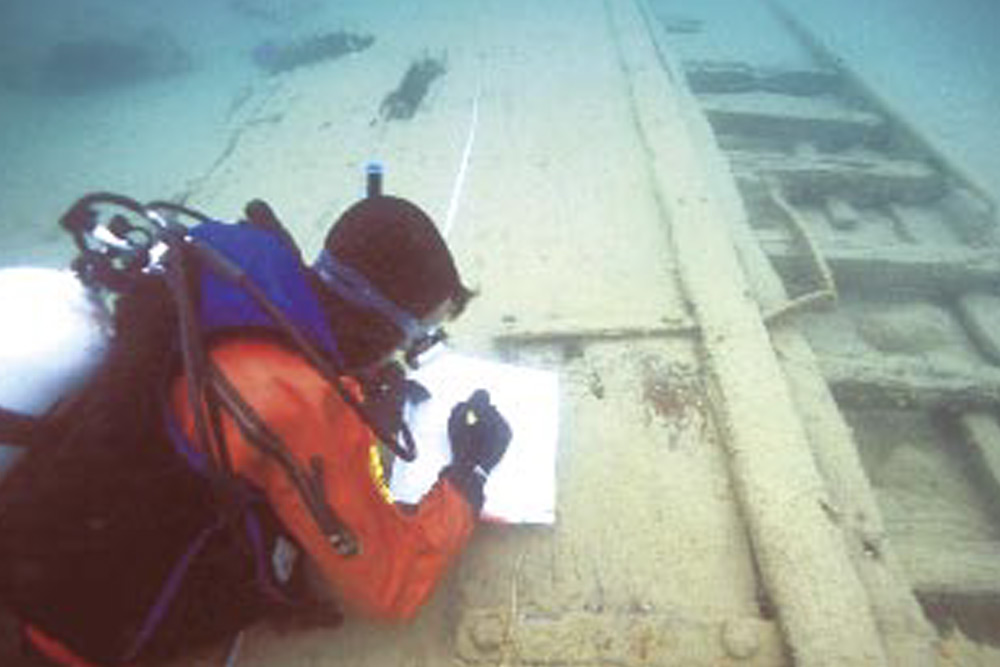 Who in the world…is a nautical archaeologist?

Seventy percent of the earth is covered with water. It’s no surprise, then, that people have been traveling by boat for thousands of years. Most vessels reach their destinations without many problems; some sink to a watery grave. They lie on the sea floor, waiting to be discovered.

When a boat sinks, it doesn’t necessarily go down in one piece. Instead, it may break up, spilling its contents across the seabed. Nautical archaeologists view the pieces they can find as parts of a puzzle. Each part tells a story— about the lives of the people who built the ship and sailed it, and how the ship was lost. That is why it is so important that archaeologists carefully record every detail before touching or removing anything from a wreck. If one object is moved, the whole story can be interpreted differently. Remember, too, these puzzles may have missing pieces.

Though we can all picture a ship sailing across the water, few people can imagine how a wreck might appear after years beneath the waves. A ship might look like a pile of boards or be covered with plants and tiny marine animals. It might be buried completely under mud or sand, to be found only with high-tech equipment. Nautical archaeologists study ships carefully to understand what they are looking at when they find a shipwreck. They must also become experts in identifying ship construction materials and building techniques. These skills help them determine the period when the ship sailed and the purpose for which it was used.

Underwater archaeologists use remote sensing equipment to “see” underwater and find shipwrecks. Magnetometers, which are like giant underwater metal detectors, and side scan sonar, which uses sound waves, help create a picture of the bottom. When archaeologists find a wreck, they may use SCUBA gear to dive on the wreck and record it. Some archaeologists use Remote Operating Vehicles (ROV). These remote-control robots let them reach wrecks that are too deep for humans to access. 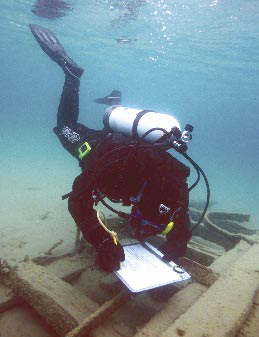 Nautical archaeologists document shipwrecks using SCUBA equipment and simple tools like a measuring tape, pencil, and sheets of Mylar taped to a slate.

In the field, nautical archaeologists typically spend most of their day without speaking. They use sign language to communicate on the wreck site, but these messages are mostly limited to emergencies. They write with a pencil on Mylar, a special underwater paper. They document the wreck by drawing what they can see, measure, and feel on sheets of Mylar and record any information they can gather from the wreck itself.