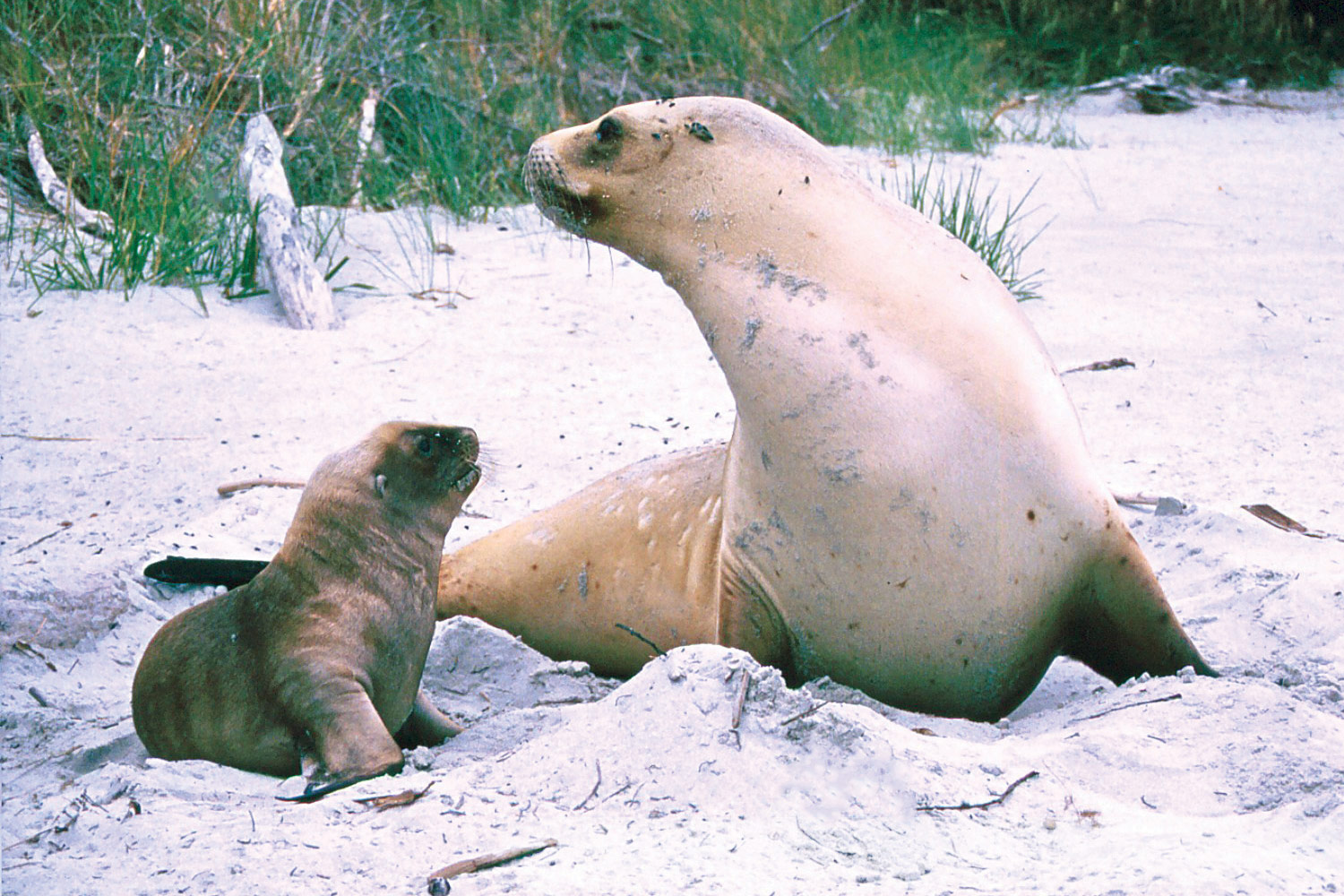 Scientific Name:
Phocarctos Hookefi
Sea lions and fur seals, unlike true seals, have external ear flaps and flippers evolved for walking on shore. They eat primarily flounder, squid, octopus, and crabs, but sometimes seabirds. Sea lions can dive to at least 1,200 ft. below the surface!

As Pacific Island voyagers continued their open ocean crossings thousands of years ago, by around the year 1200 they had made their last major stop on what would be the last large inhabitable land mass on Earth to be settled by humans. There they settled in a series of iwi, or tribes, and would become what we now know as the Māori of Aotearoa New Zealand.¹ The Māori soon discovered that Aotearoa did not have any native land mammals other than two species of bat. So, to feed themselves they relied on the rodents and plants they brought with them, and once ashore in New Zealand they captured seabirds and the large, flightless land birds that had evolved and thrived in this mammal-free archipelago.

The Māori also turned to kaimoana, or seafood, as well as to the mammals that spent part of the year on the beaches, animals that had never encountered humans before. These were several species of pinnipeds—seals and sea lions—including one species that is found only in these waters, the Whakahao. For a time, these were called Hooker’s sea lion after the English botanist Joseph Hooker; today they’re commonly known as simply the New Zealand sea lion. Archaeologists and biologists believe the New Zealand sea lion was eradicated from the main three islands of Aotearoa by about 1700. The species survived only by way of breeding colonies on remote sub-Antarctic islands, such as in the Auckland Islands or at Campbell Island.

In the 1800s, the remaining populations of the New Zealand sea lion were pushed still further to the brink of extinction by American, British, and French settlers and hunters who killed pinnipeds on those remote beaches for their fur and oil, and occasionally for food. This hunting proved devastating to all pinniped populations. In time, there were so few left in New Zealand waters that it wasn’t worth the trouble for hunters to seek them out. By the 1900s New Zealanders only saw scattered males occasionally hauling out on southern beaches during a couple of winter months a year. 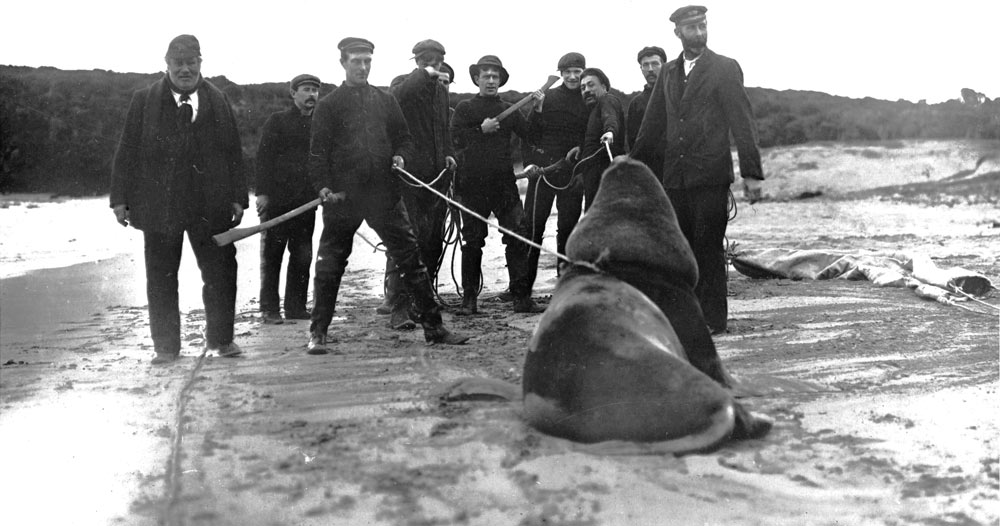 Then in 1993 something miraculous happened. For the first time in probably more than 150 years, a female New Zealand sea lion hauled herself out on a beach of mainland Aotearoa, at the mouth of the Taieri River in the South Island. A lot had changed since the hunters abandoned the area, and by then people were excited to watch and protect these “sea bears.” Unbothered by humans, she later gave birth to a healthy pup. This unique mother sea lion became known as “Mum,” and she returned several times over the years and went on to give birth to eleven pups. Today, between ten and twenty pups are born on South Island beaches each year. 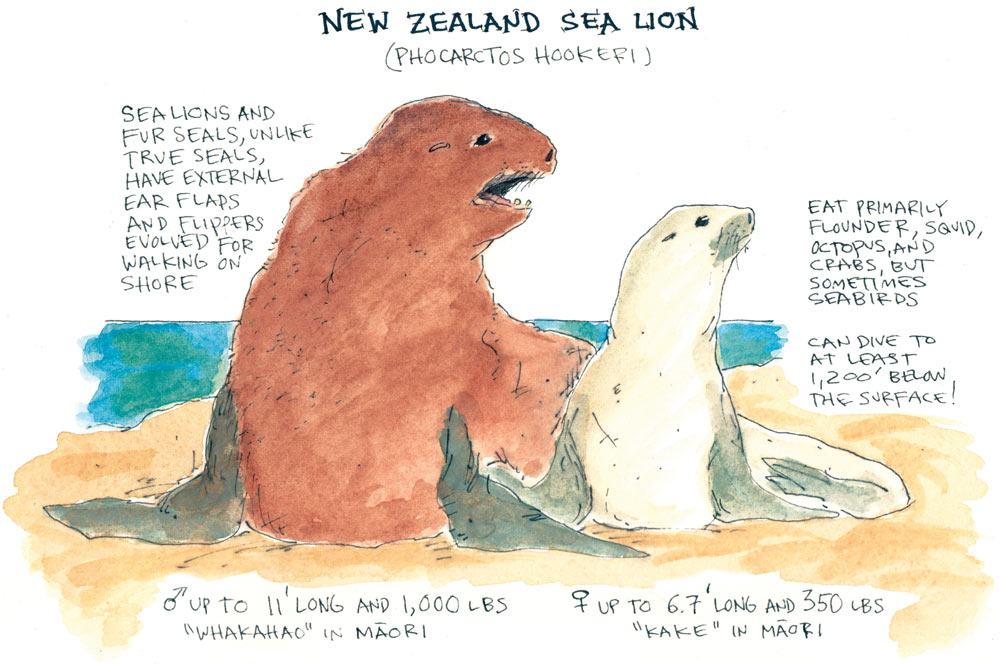 Female New Zealand sea lions, more so than most other pinnipeds, have a distinctly light, creamy-colored coat. Females can grow to about 350 pounds, while large bull sea lions can grow to nearly 1,000 pounds. In recent years, New Zealand sea lions have been tracked diving more than 1,200 feet below the surface to capture their primary diet of fish, squid, octopuses, and crabs. They use their large eyes and extraordinarily sensitive whiskers, vibrissae, to find their way and hunt in the dark. 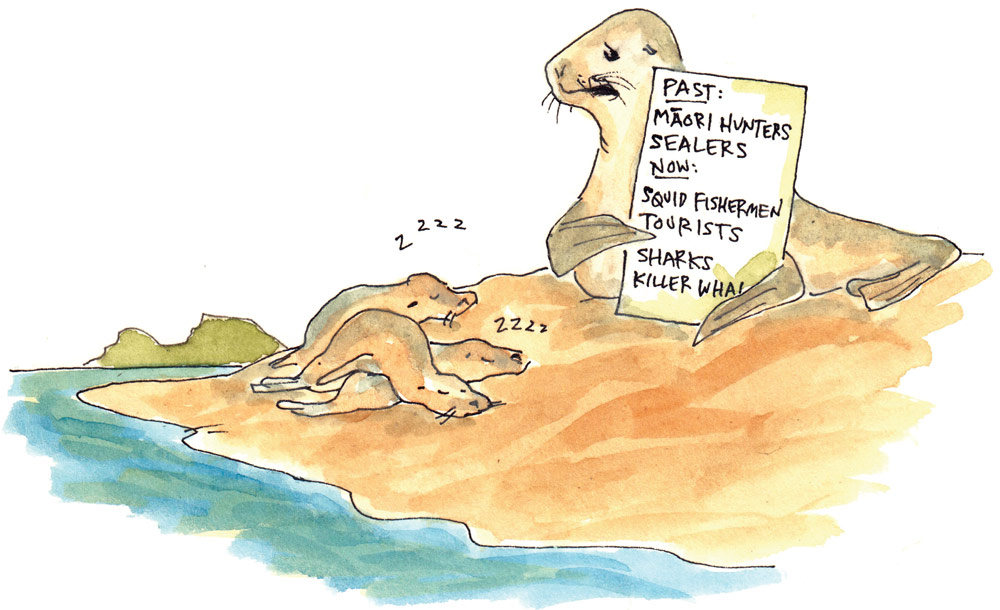 Despite the good news about “Mum,” however, the New Zealand sea lion is still the world’s rarest species of sea lion and remains classified by the International Union for Conservation of Nature (IUCN) as endangered and decreasing, with a current population estimate of fewer than 10,000. These sea lions remain threatened by development and human disturbance in areas where they haul out to mate and raise their young. They also often get captured and drown in the nets of fishing vessels trawling for squid, despite attempts to reduce these incidents with improvements to fishing gear and New Zealand government regulations. 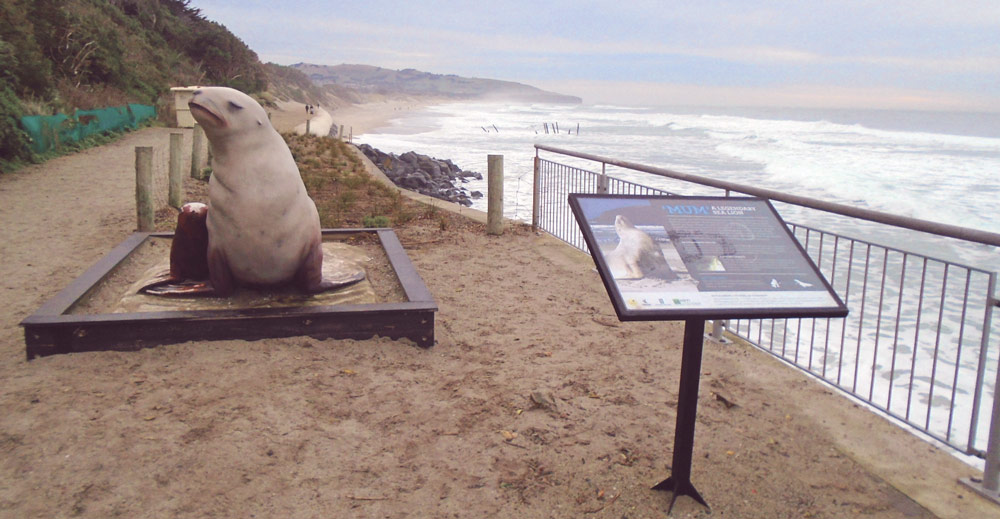 The featured photo is of Mum and her 8th pup in 2003. To learn more about Mum and the New Zealand sea lion, read Coasting: The Sea Lion and the Lark by Neville Peat.

¹Aotearoa, “land of the long white cloud,” is the Māori name for New Zealand.