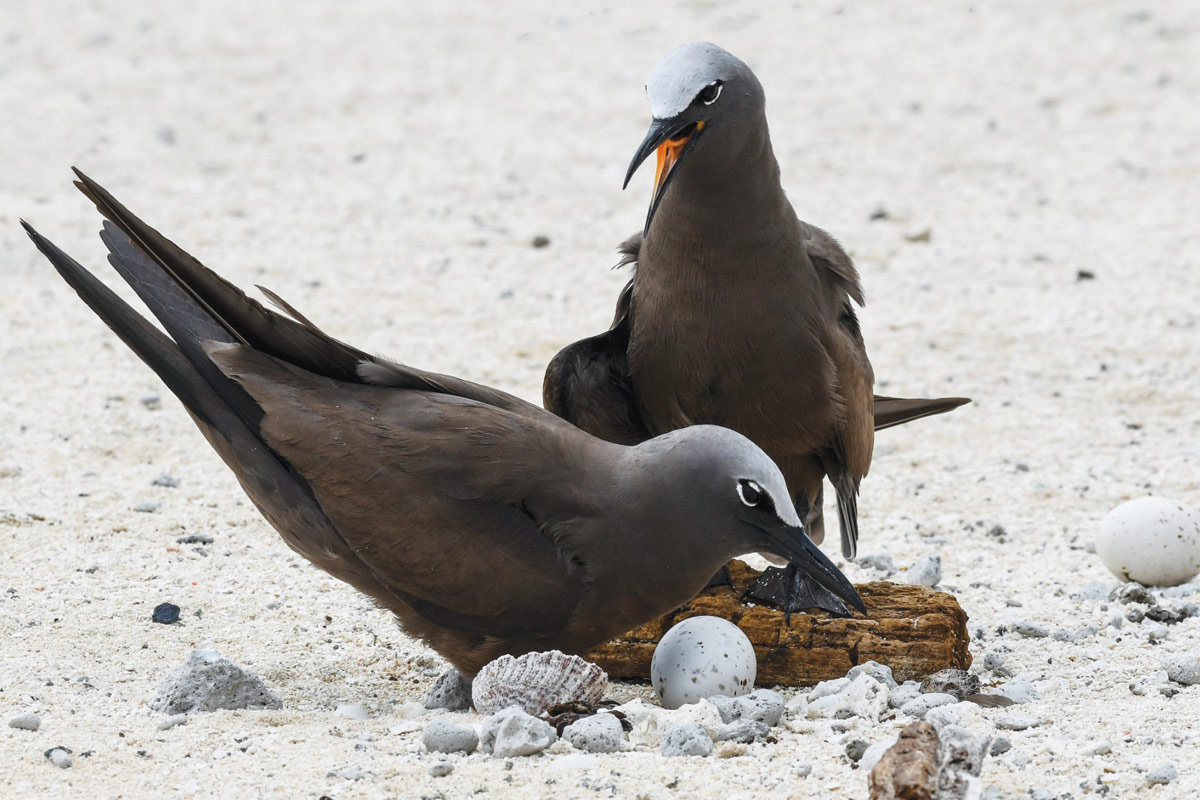 Scientific Name:
Anous stolidus
Lifespan:
26 years in the wild
The brown noddy forages by swooping over the water and dipping down to catch small squid, other mollusks, aquatic insects and fish (such as sardines, anchovies, etc.) and snatching prey from the air, too. It will also feed on fruit, mostly the screw pine fruit.  Photo of a brown noddy flying low over the Great Barrier Reef, Australia courtesy of www.jjharrison.com.au. 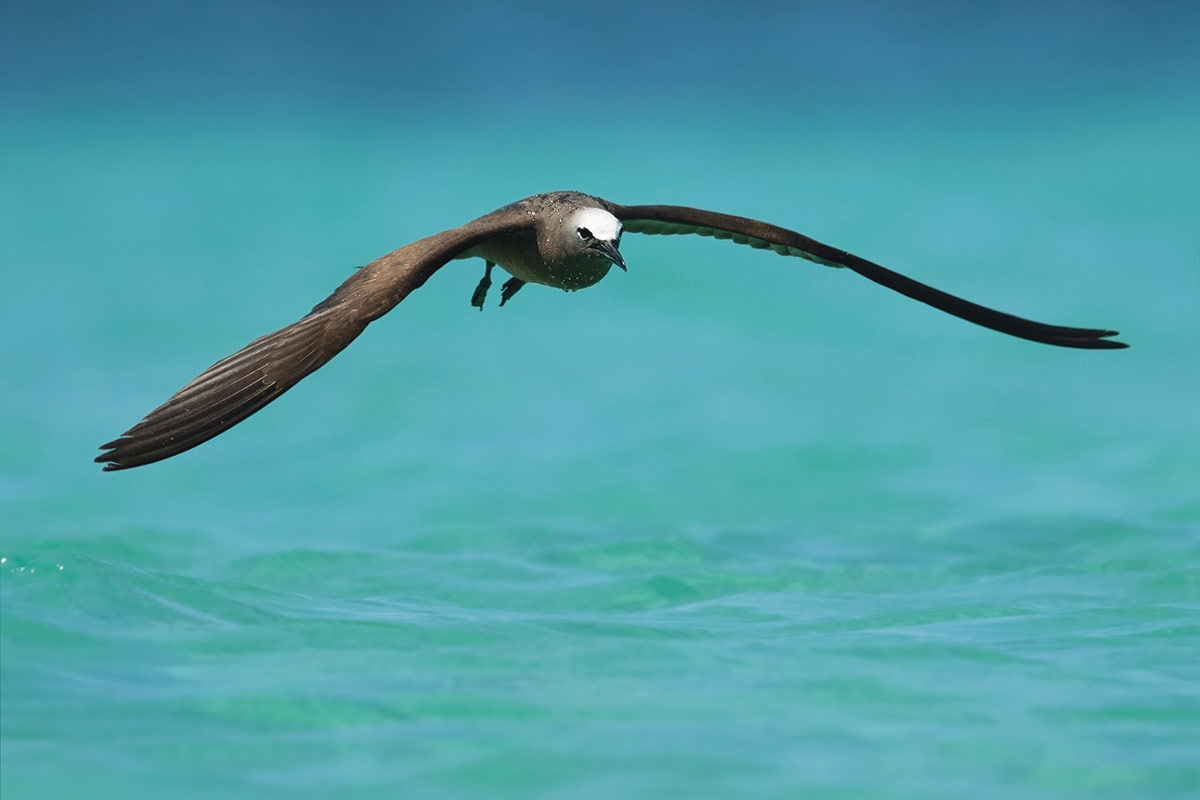 When on his outbound passage aboard HMS Beagle, 22-year-old Charles Darwin failed to see the beauty, intelligence, and the usefulness to humans of the seabirds he observed in the tropics. In February of 1832, Beagle’s captain anchored the ship off St. Peter and St. Paul Rocks, a little archipelago of low-lying islands in the equatorial Atlantic.

We only observed two kinds of birds, the booby and the noddy… Both are of a tame and stupid disposition, and are so unaccustomed to visitors, that I could have killed any number of them with my geological hammer. The booby lays her eggs on the bare rock; but the [noddy] makes a very simple nest with seaweed. By the side of many of these nests a small flying-fish was placed; which, I suppose, had been brought by the male bird for its partner.

The brown noddies transit across all oceans, preferring tropical and subtropical seas and islands for roosting and nesting. Their only breeding island in the United States is on one spot in the most distant of the Florida Keys, but their worldwide populations seem reasonably stable today, with nesting populations on islands around the world including St. Peter and St. Paul, Hawai‘i, the Phoenix Islands, and the Galápagos, as well as islands off both western and eastern Australia and in the Red Sea. 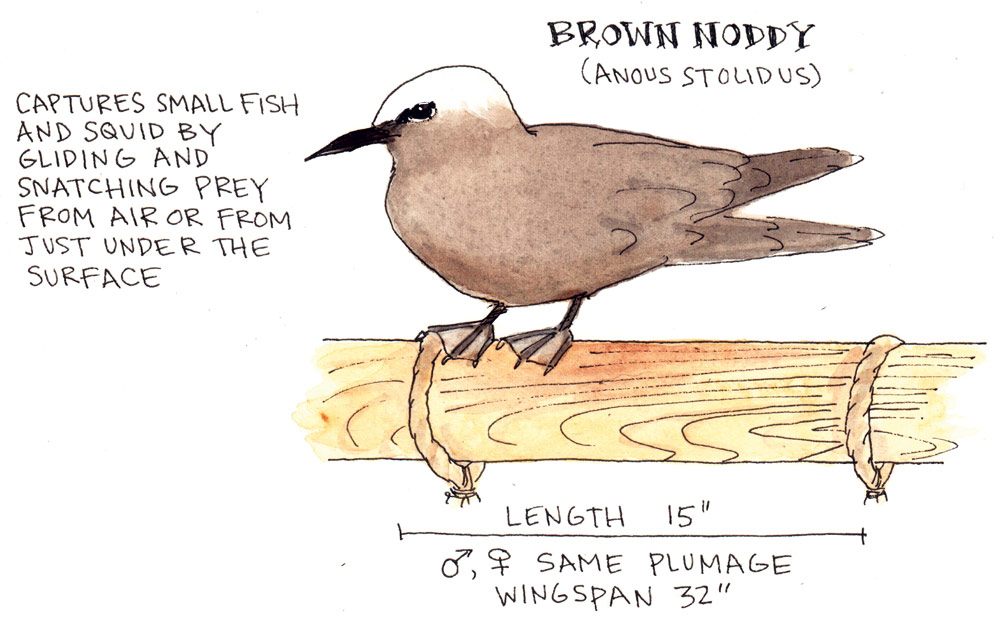 Young Darwin was hardly the first to demean the intelligence of noddies and other seabirds. James F. Stephens had a few years earlier published a similar judgment of noddies: “They are said to be a very stupid race of birds, and to allow themselves to be knocked on the head without attempting to remove from the place; they are usually of very dark and somber colours.” The scientific genus name for noddies, Anous, means silly or clueless in Greek, and the brown noddy’s species name, stolida, means slow or dull in Latin. Stephens wrote that the common name, “noddy,” comes from “their apparent stupidity flying into ships,” as well as allowing themselves to be caught—although, he reported, they put up a scratching fight once captured. 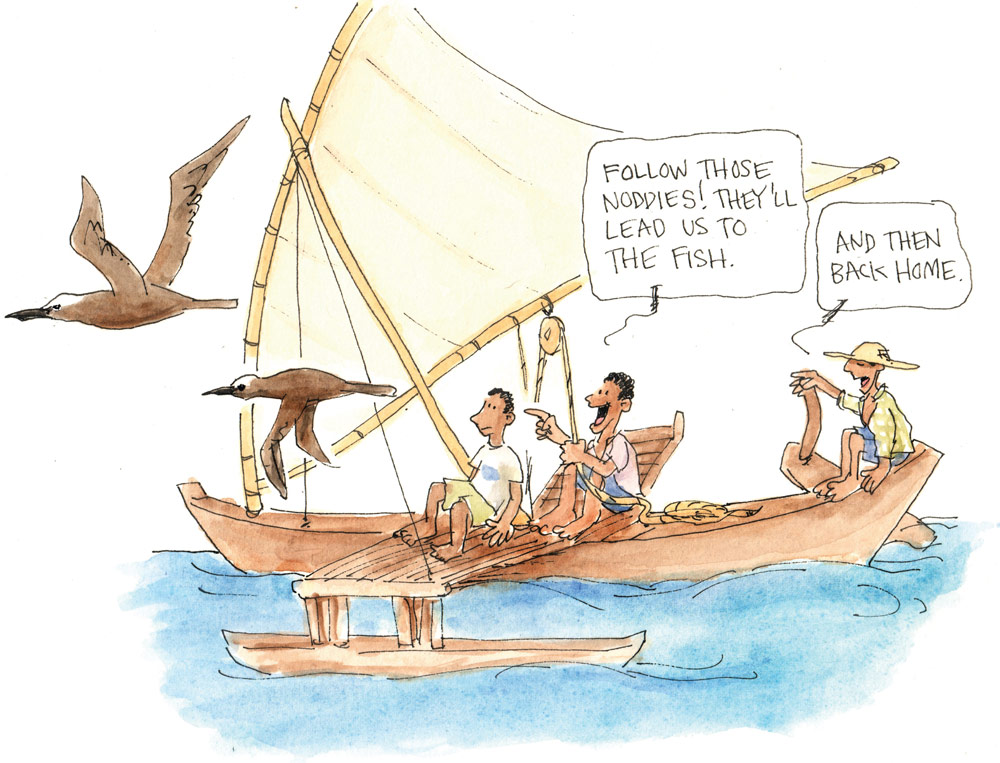 Around this same time, John James Audubon was sailing aboard a ship in 1826, bound for London from New Orleans through the Straits of Florida. In his journal he sketched a detailed and life-sized illustration of a brown noddy that one of the crew had captured when the bird landed on one of the ship’s booms. “I know nothing of this Bird more than what Our Sailors say,” Audubon wrote, “that it is a Nody and frequently alights about Vessels in this Latitude.”

During this era, in England noddy was a slang word for “sleepy,” but also an adjective for simple and foolish—even idiotic, which was used as far back as the 1500s. A more recent derivation of the name noddy, while perhaps more charitable but likely not correct, is that the name refers to the ways that noddies bow as part of their mating ritual. Both males and females move their beaks up and down very close to each other, as if they’re continually agreeing with one another—very much nodding.

What Darwin and many of the other lubberly 19th-century naturalists and explorers missed about noddies and other groups of seabirds is that not only had these animals not yet learned to be afraid of people, but that ocean-reliant Indigenous communities for millennia have relied on select seabirds, including noddies, to help them find fish on the surface, as well as to help them navigate when out of sight of land. 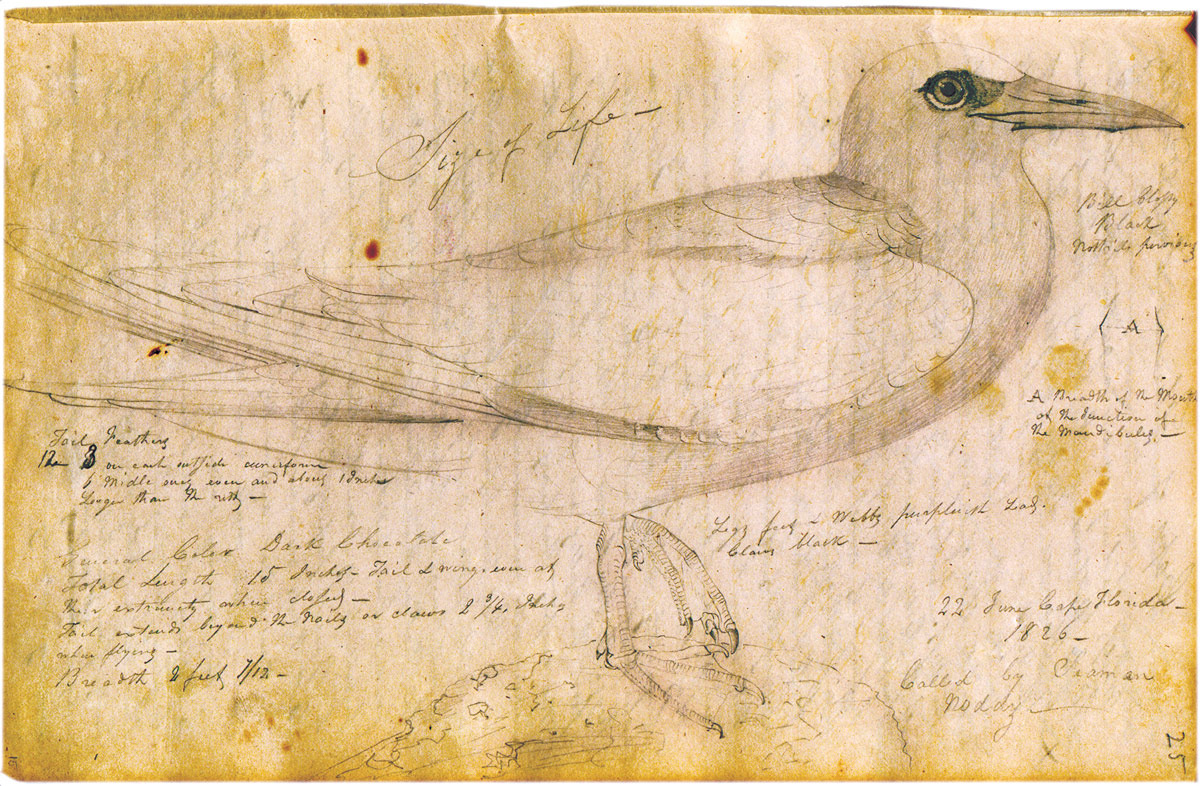 John James Audubon drew a “Size of Life” noddy in his journal from a bird that landed on his ship in the Straits of Florida in 1826. Drawing courtesy of the Field Museum, Chicago.

In the Indian Ocean, for example, noddies regularly join feeding frenzies over schooling fish, capturing the smaller fish, squids, or crustaceans scared up by tuna and dolphinfish. Noddies don’t carry their fish home in their beaks, but swallow their food and then regurgitate it back to their young ashore. This is likely what Darwin saw—regurgitated flying fish beside the nest. For centuries before modern fish-finding technology developed, fishermen off the Maldives used noddies specifically to locate schools of skipjack tuna.

In the Pacific, noddies are some of the most useful birds for traditional navigators, especially those sailing among low island atolls. Not only do flocks of noddies go home to roost each night, they tend to range farther from shore than other daytime foragers. In the late 1960s Teeta Tatua of Kuria, a master navigator from the Gilbert Islands, explained to sailor-anthropologist David Lewis: “Birds are very useful up to twice the sight range of an island from a canoe. The sight range of land is about ten miles, and that of the birds twenty. The birds which are most significant are terns and noddies.” At sunrise or near dusk, a flock of noddies flying inbound or outbound draws a clear path in the sky toward land. Modern studies have confirmed the range reported by Teeta Tatua, although brown noddies in the eastern Indian Ocean have been observed flying some 125 miles from their avian colonies to fish.

Take that, Darwin, you noddy!

For more Animals in Sea History see seahistory.org or educators.mysticseaport.org. 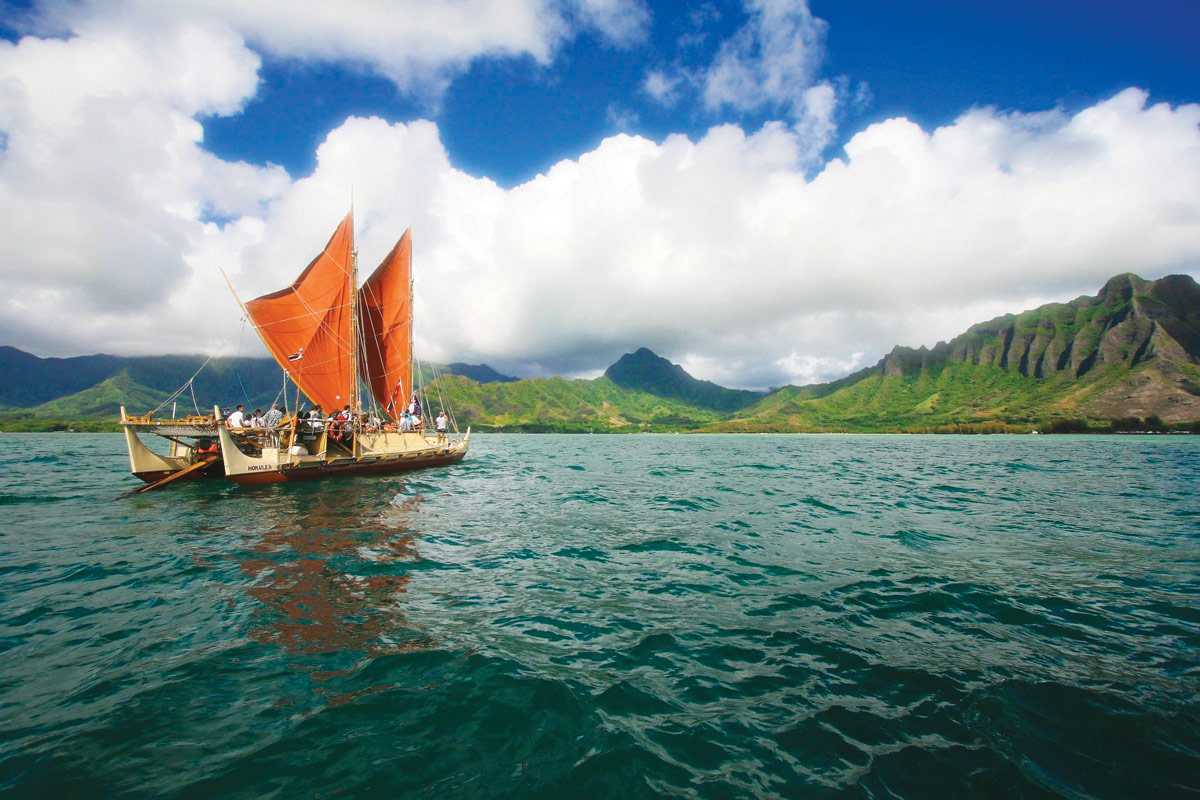