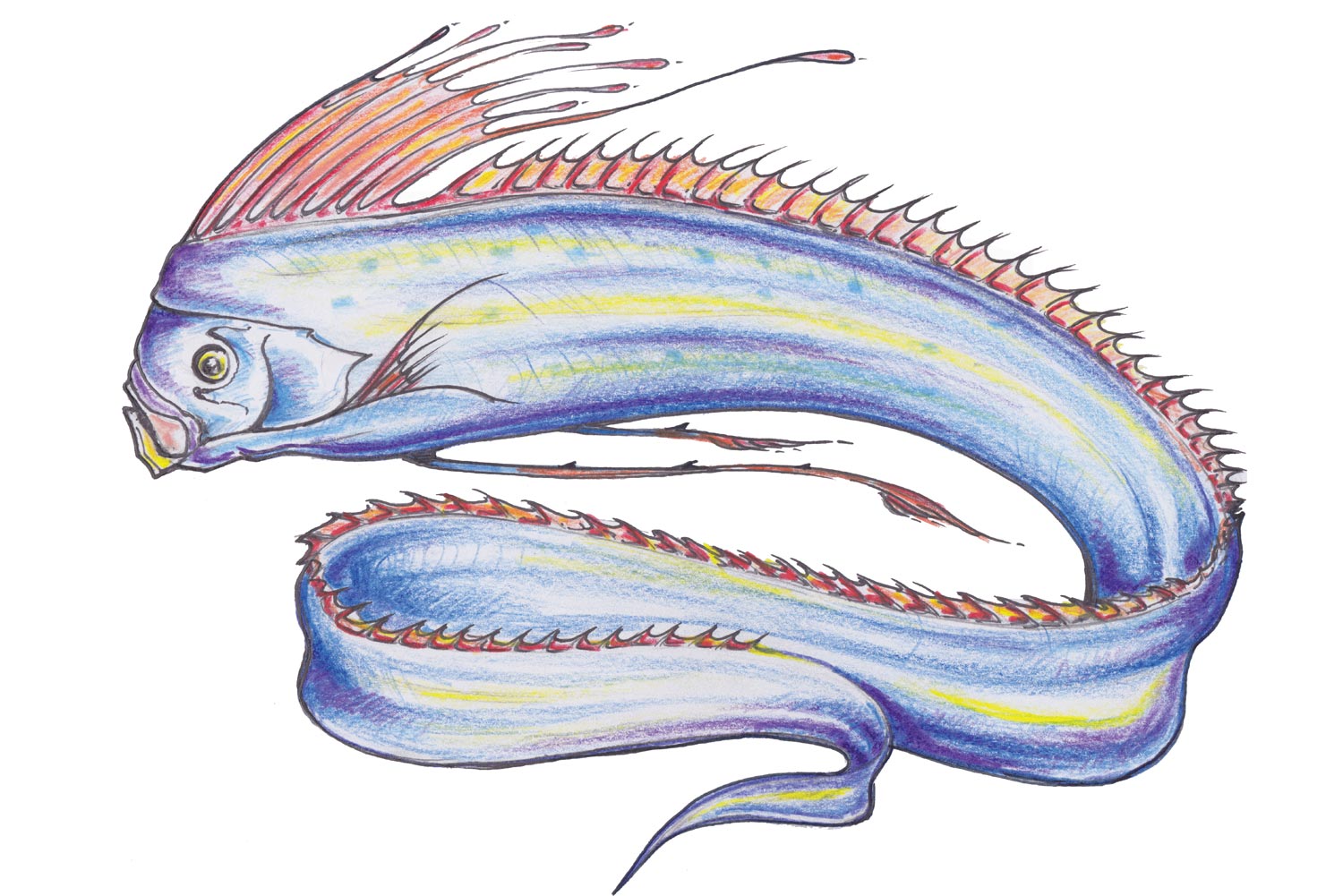 Scientific Name:
Regalecus glesne
The oarfish has large eyes, a small mouth without teeth. They have a mane-like crest and a red dorsal fin that runs the full length of its body.
Illustration: Bermuda Sea Serpent, from Harper’s Weekly, 3 March 1860. Engraving courtesy of Library of Congress. 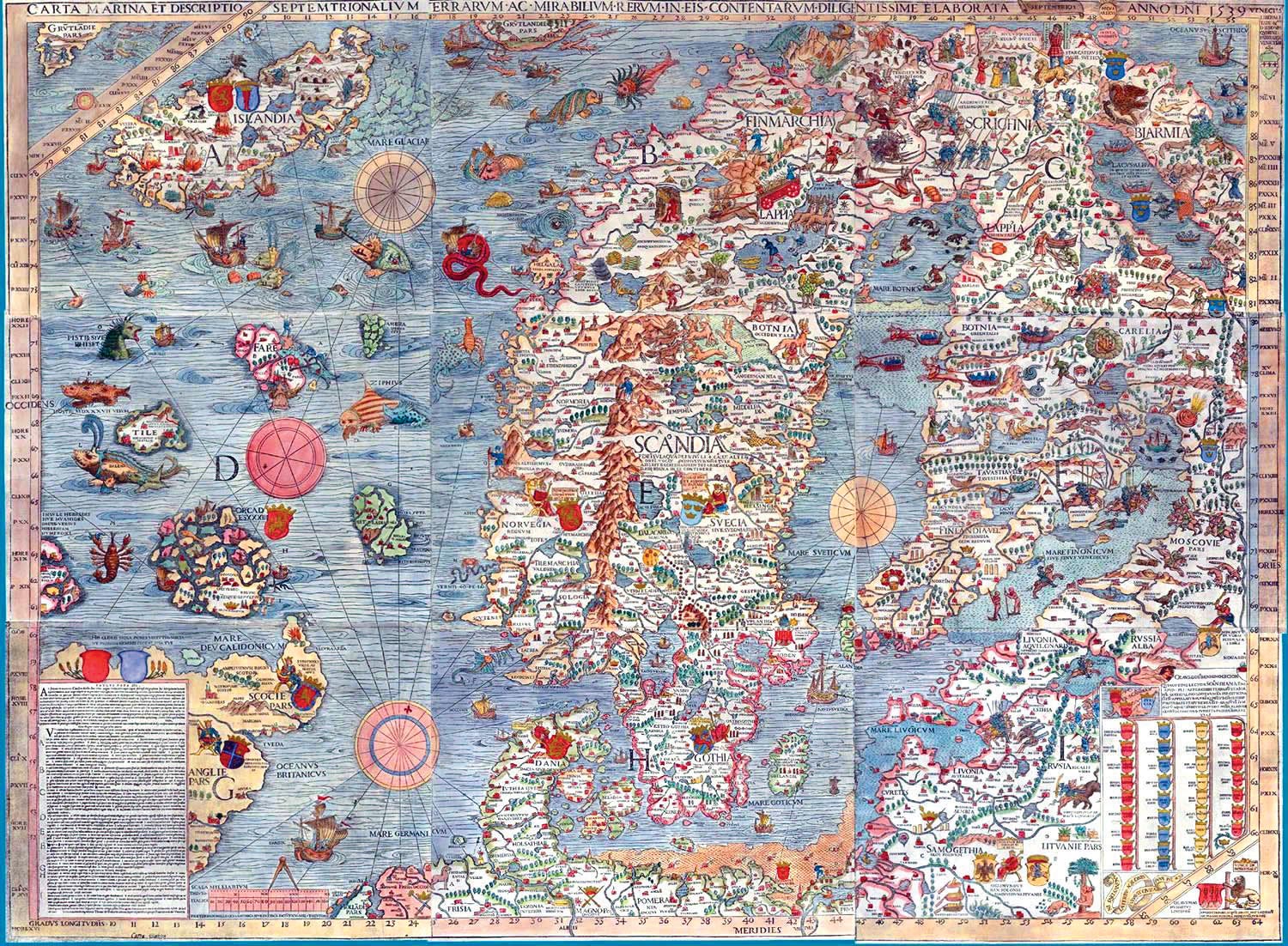 If you go sailing in Scandinavian waters using Olaus Magnus’s 1539 map titled Carta Marina, or “Map of the Sea,” you might want to keep a sharp lookout for sea monsters. Really. They are right there on the chart, which was considered the most accurate map of the region when it was made.

Take a look at a modern nautical chart and compare it to maps from antiquity—one thing that stands out is the absence of fantastical sea monsters out in the open ocean (see article on pages 24-27). Were these creatures the products of the cartographer’s overactive imagination? Perhaps not.

Today’s sailors share one talent with seafarers from long ago—their ability to tell a good story. “Never let the truth get in the way of a good story” is the storyteller’s creed, and those who sailed off over the horizon were happy to entertain their friends and family when they came home with tales of adventure, danger, and great feats. In 1734, a missionary named Hans Egede was sailing off the coast of Greenland when he saw a “most terrible creature.” He later wrote that the creature “lifted its head so high that it seemed to be higher than the crow’s nest on the mainmast, … [that] the monster was longer than our whole ship.” Some people think Hans must have been describing the rarely seen giant squid, but it is hard to tell for certain. There’s a sketch from a March 1860 Harper’s Weekly showing a “great sea serpent” that washed up on Hungary Beach in Bermuda a few months before.

Could it be that some of these sea creatures depicted on old maps are real? 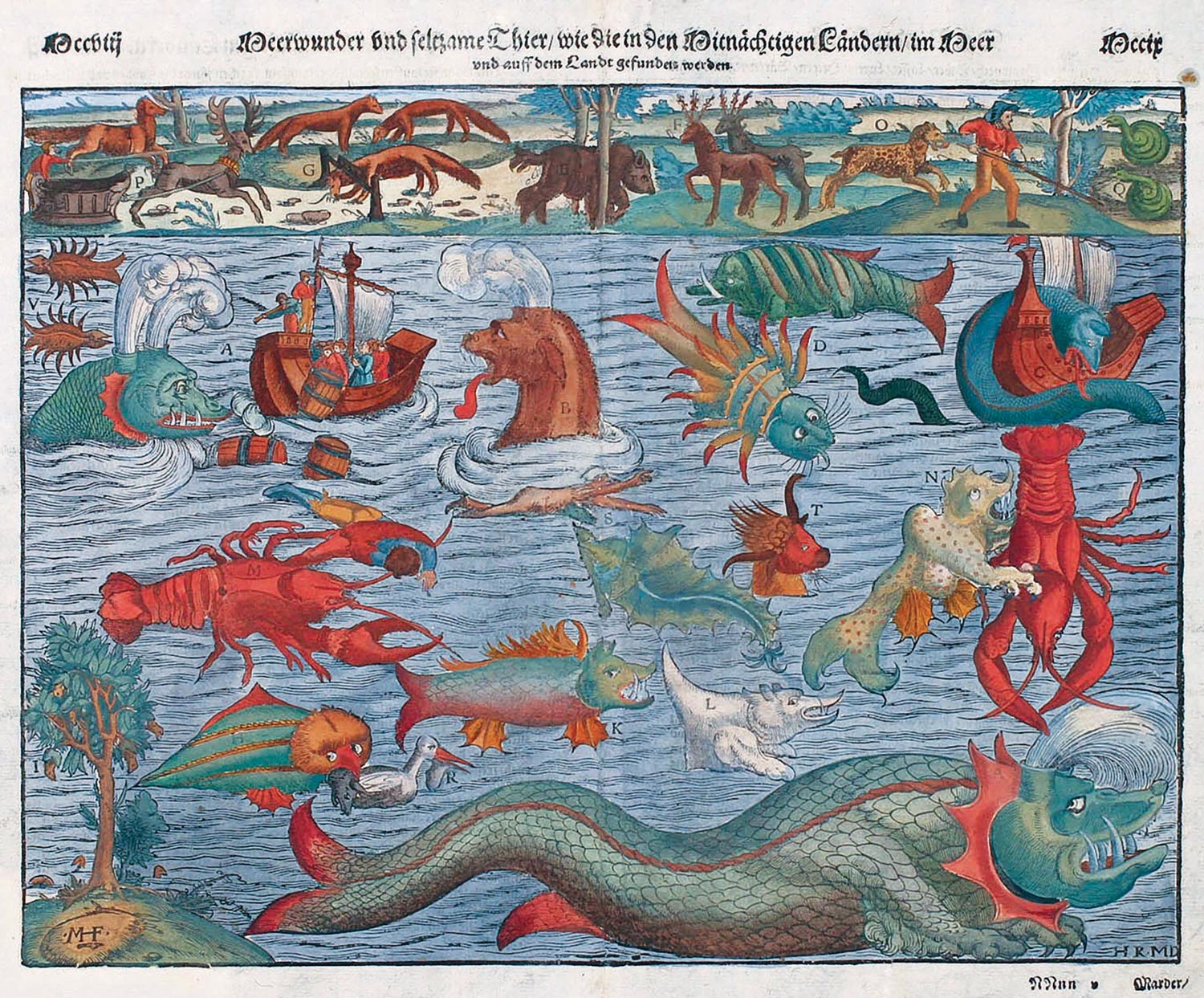 Details from the Carta Marina map show two giant lobsters (one clutching a man in its claw), creatures that spout like whales, and a sea serpent wrapping itself around a ship.

Take a look at the oarfish, or Regalecus glesne, that a snorkeler named Jasmine Santana found while she was swimming off Catalina Island in Southern California in October of 2013. Rarely seen, the freakish-looking oarfish is the world’s largest bony fish and is likely the animal described by sailors as a sea serpent. Not much is known about the oarfish because it lives in the deeper parts of the ocean and only surfaces when it is sick or injured. The oarfish can reach more than 50 feet long and can weigh up to 400 pounds. Jasmine’s oarfish was already dead when she found it. She grabbed the tail and dragged it into shallower water and enlisted the help of her friends. It took more than a dozen people to help her get it out of the water.

It was only a couple of years ago that scientists discovered that the long slithery fish doesn’t swim horizontally through the water like other fish. A group of marine biologists were using an ROV (remotely operated vehicle) in the Gulf of Mexico when they, by chance, caught a live oarfish in the camera’s lens. They observed that the oarfish swims vertically in the water column by using its long red dorsal fin, which runs the full length of its body, to hold its body in position. If it needs to pick up the pace, it undulates like a snake to move more rapidly through the water.

The oarfish Jasmine Santana found in California is less than half the length adults can reach, but it might be a bit of a stretch to think that this creature could wrap itself around a ship and eat its crew. Then again, if a lobster big enough to grip a man in its claw is offered at dinner, make sure you invite a friend or two (or ten) to share and hope that the restaurant doesn’t charge by the pound.

What can YOU do?

Learn more at Getting Rid of Marine Debris