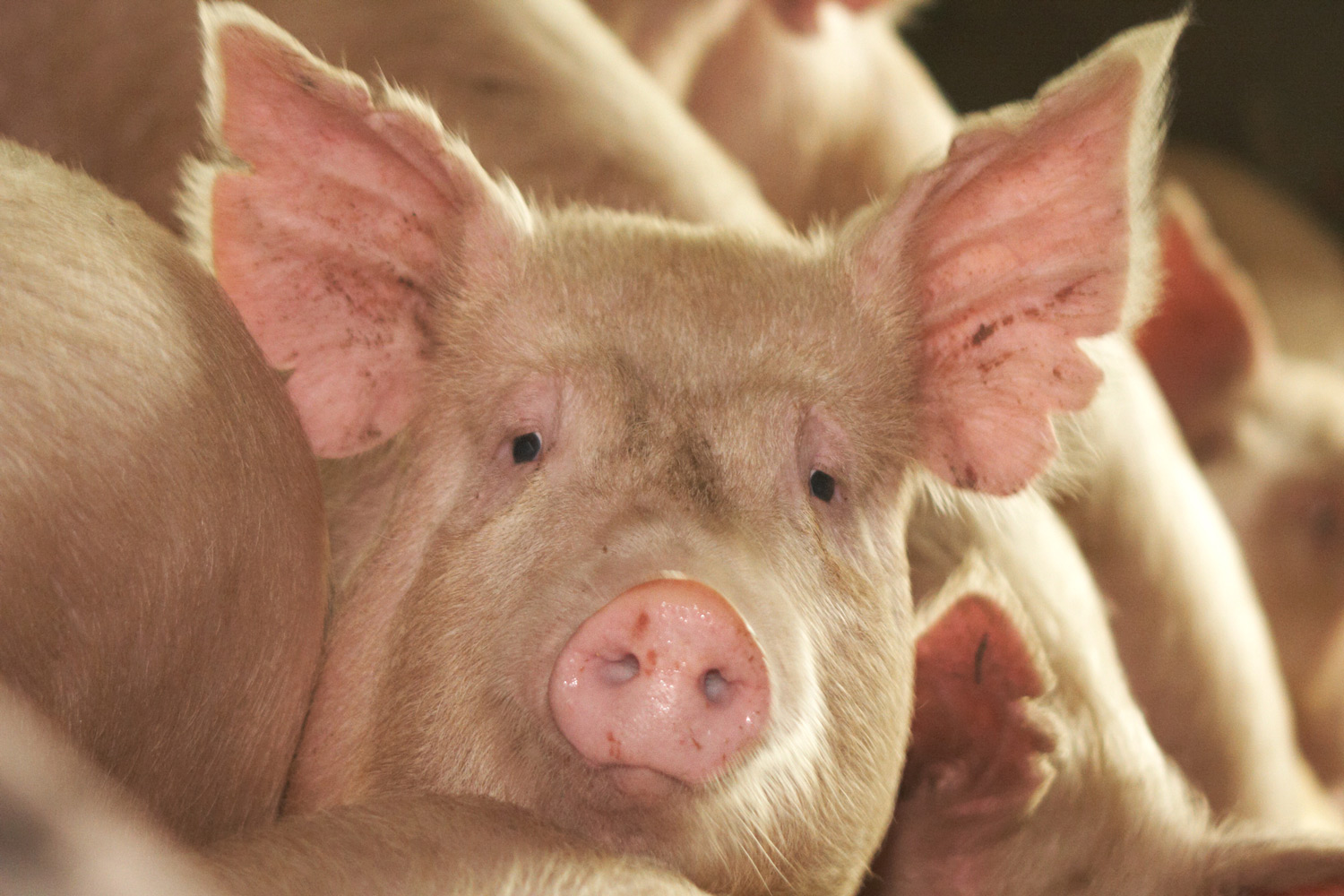 Scientific Name:
Sus scrofa domestica
Lifespan:
10-15 years
The domestic pig, often called swine, hog, or simply pig when there is no need to distinguish it from other pigs, is a large, even-toed ungulate. It is variously considered a subspecies of the wild boar or a distinct species. 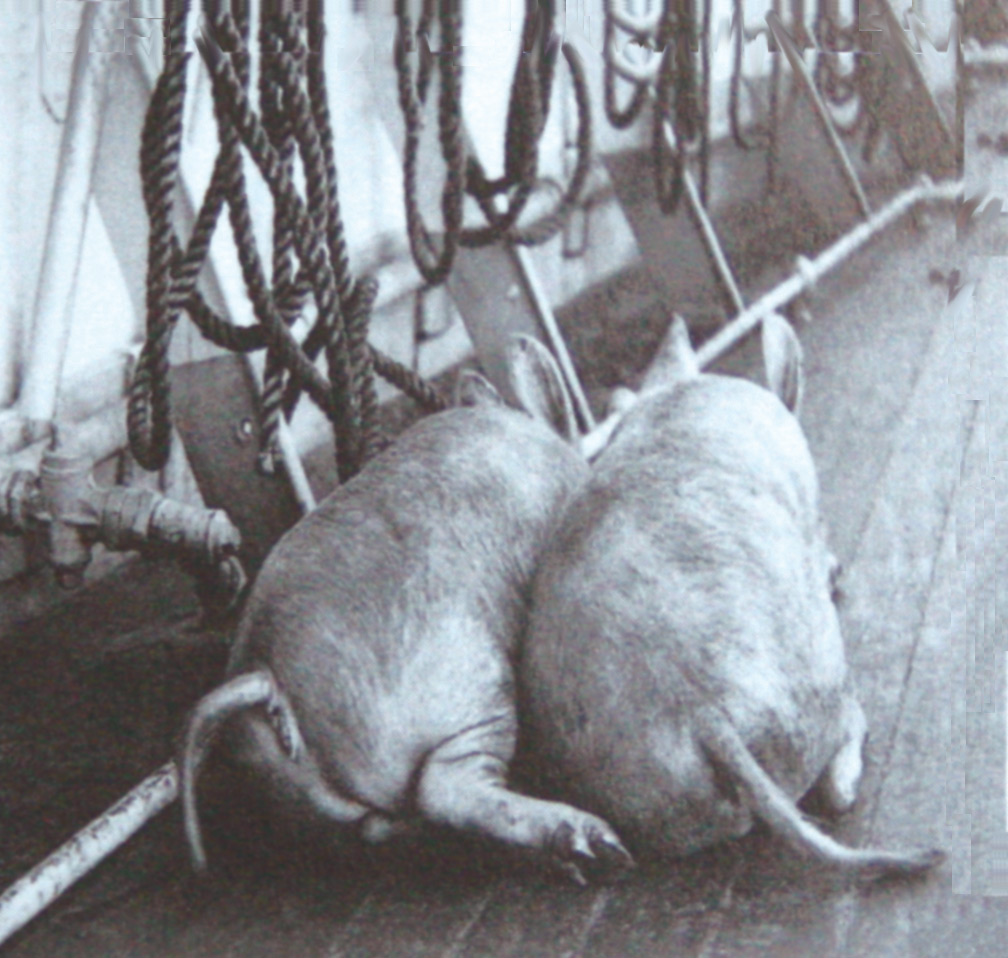 In his book, The Last Grain Race, Eric Newby tells of his first voyage at sea. Newby served as an apprentice seaman and was often given the nasty job of cleaning out the pigpen. Bound for Australia, his ship sailed from Europe with one white female pig and three black males. The crew ate the female early on in the voyage, but the three males were kept alive for a long time. The crew named them Auguste, Filimon, and Fabian. These pigs were “terrific toughs” and often walked freely around the decks, getting into all sorts of trouble. They got paint on their snouts, tipped men over in their hammocks, and begged for water from the cook.

Newby wrote: “They used to lie in wait for the men carrying coal to the galley and when they appeared, rush on them from every side, endeavouring to upset the coal bucket. Usually they succeeded in securing a big piece and would go roistering off, punting it before them like boys with a football on a common, until it broke. Then they ate it.”

Before refrigeration, sailors often took livestock to sea so they could have fresh food during a long voyage. Pigs were a common cargo, as were horses, chickens, and turtles. Scholar R.A. Donkin explains that pigs were among the earliest domesticated animals brought to the New World, and they provided “the most important food supply.” Eight pigs sailed with Christopher Columbus on his second voyage to the New World. Pigs are hearty animals and will eat almost anything, so they could survive on long passages at sea and settle well in new places. Mariners introduced pigs to far away lands and would leave them there so that any future marooned sailors could use them for food. These pigs often damaged these new environments, some of which were islands that previously did not have mammals—like the Galapagos. Pigs ate just about everything they could find, including the eggs of birds and reptiles.

In his 1849 novel, Redburn, Herman Melville also wrote about an apprentice having to clean a pigpen on a sailing ship. Another time, he wrote in his journal about sailing on a clipper ship in rough seas where he saw a piglet drown in a big wave that broke over the rail. In 1864, P. H. Gosse wrote about meeting an English fisherman who had a story about his pet pig: “There was a dog on board, too, and the pig and he were capital friends; they ate together, and would lie down side by side under the bulwarks in the sun. The only thing they ever quarreled about was lodging.” One stormy night the pig pretended he was eating a dinner. The dog ran out to try to get some of the food and the pig ran into the dog kennel and spent the night warm and dry, while his canine friend tried to sleep out in the rain.

Some Scottish fishermen wouldn’t dare keep a pig onboard. They believe that even saying the word brings them bad luck at sea. Pork isn’t allowed on their boats, and if the animal must be mentioned at sea, the men call them “curly tails.”

Throughout history, however, other mariners have used pigs as part of their nautical vocabulary. Blocks of metal used for ballast are “pig iron.” Large barrels are “hogsheads.” Sextants and octants used to be called “pig-yokes” or “hog-yokes.” The pole that holds a flag at the masthead is a “pig stick.” Sailors in the South Seas who feared cannibals knew a cooked human as a “long pig.” When a ship is “hogging,” her bow and stern are sagging, and a boat builder might install a “hog-frame” to keep that from happening. A “hog ring” is a bendable staple to help keep things together. Finally, sailors on ships that carried livestock referred to the two sides of their vessel as PORK and starboard.

Okay, fine, it’s port not pork, but the rest of what I told you about pigs aboard ships is all true. Next issue, you’ll learn about a seabird whose only sound is a pig-like grunt. 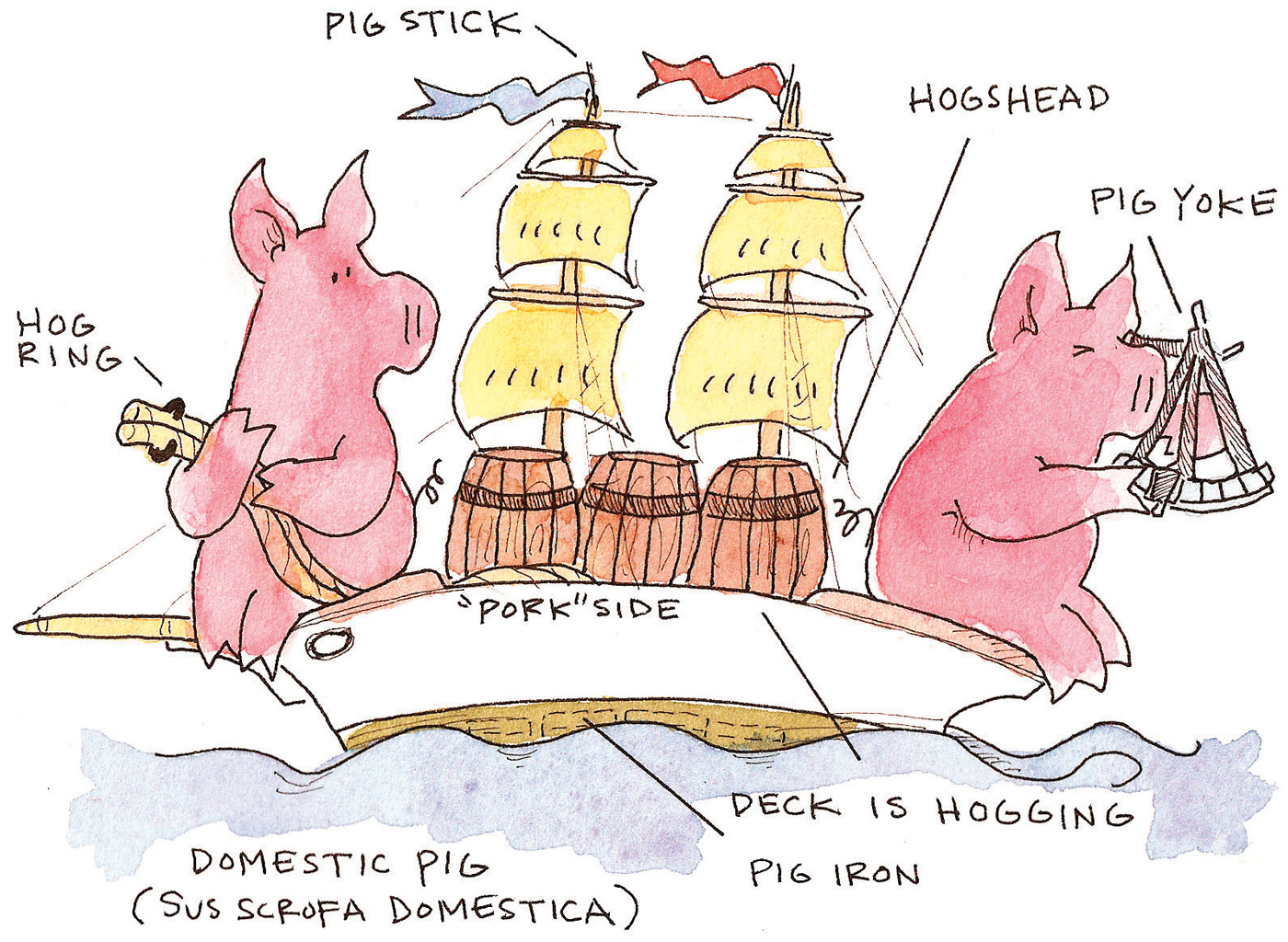