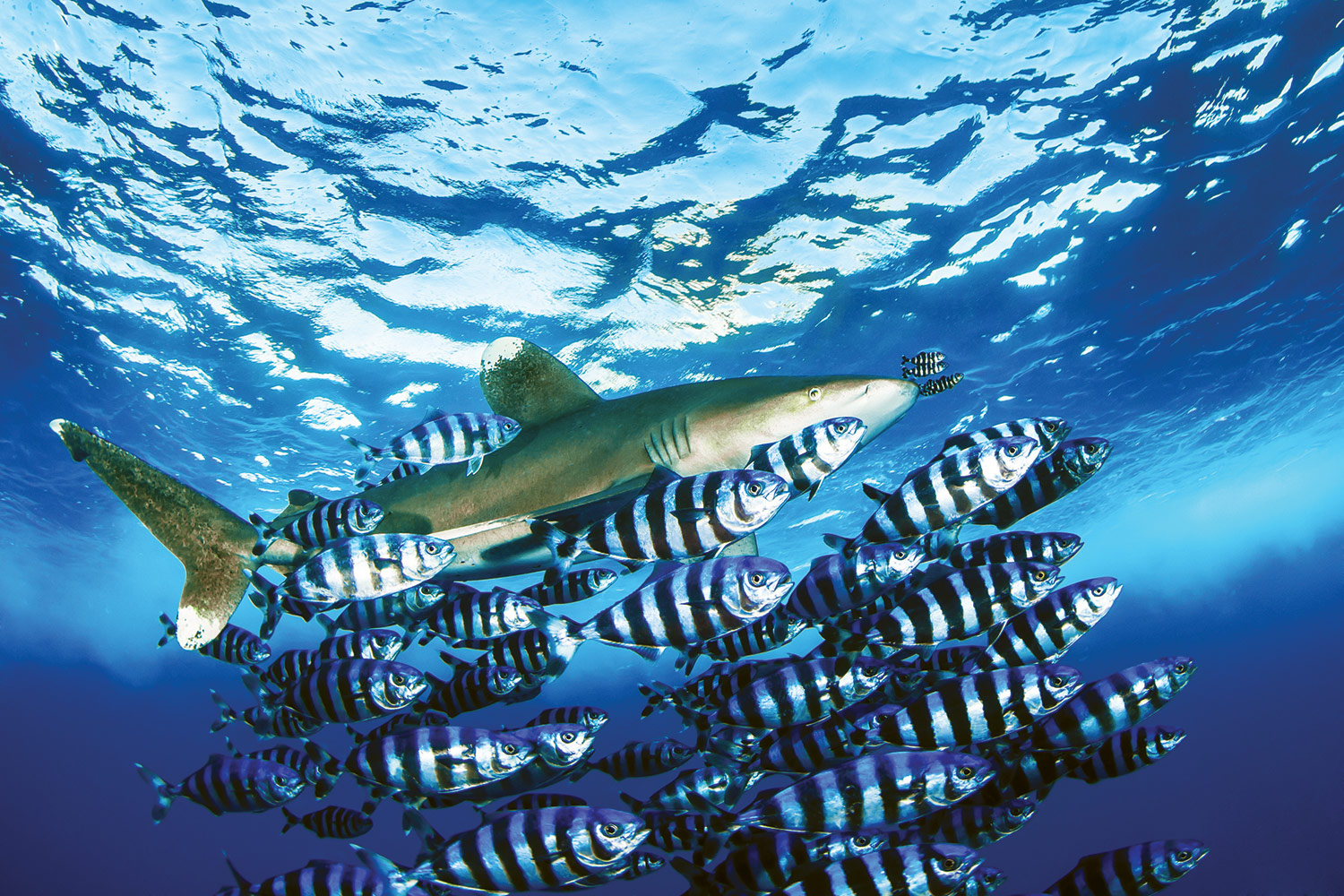 Scientific Name:
Naucrates Dutor
The pilot fish is a carnivorous fish of the trevally, or jackfish family, Carangidae. It is widely distributed and lives in warm or tropical open seas. Pilot fish usually gather around sharks (also rays and sea turtles). 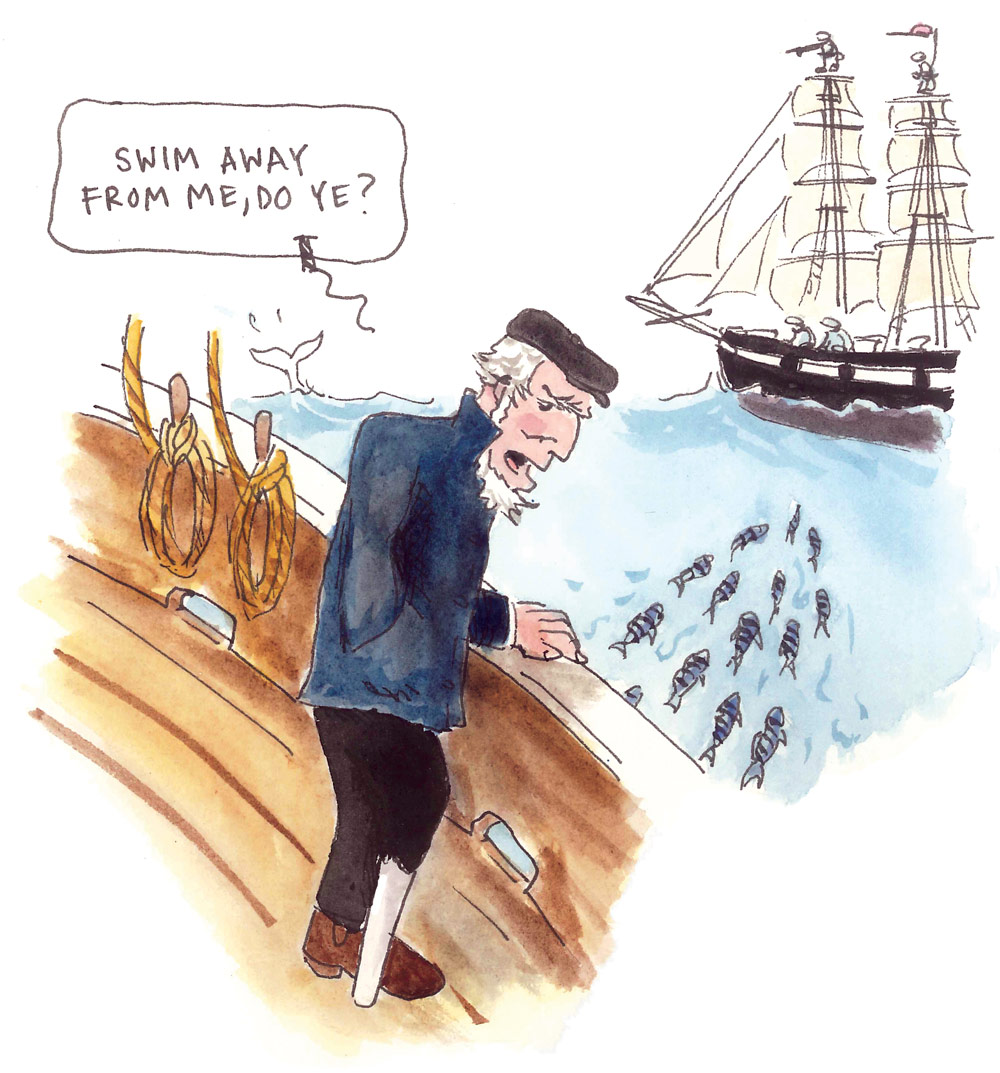 Early in the novel Moby-Dick, Captain Ahab leans over the side of his ship. The captain is navigating across the Atlantic Ocean and has just come upon another whaleship sailing in the other direction. Ishmael, the narrator, tells what happened: “Shoals of small harmless fish that for some days before had been placidly swimming by our side, darted away with what seemed shuddering fins, and arranged themselves fore and aft with the stranger’s flanks.” The small fish, which had been swimming under the hull, leave to choose the other vessel, as if they were rats fleeing a ship on fire. Ahab murmurs, sadly, looking over the rail at the fish: “Swim away from me, do ye?” Ahab sees this as a dark omen for his voyage to hunt the white whale.

Would a school of fish hang out under a ship and then move to another? If so, why, and what kind of fish would these be?

When writing this scene in Moby-Dick, Herman Melville was almost certainly imagining these as pilot fish, a silvery blue-striped species well known to whalemen at the time. Melville would have observed these fish during his years sailing around both the tropical Pacific and Atlantic. He also learned about the legendary habits of pilot fish in two books that we know he read as he was completing his literary masterpiece in 1851.

To do research for Moby-Dick, Melville read the account by the naturalist Frederick Bennett, who sailed as a ship’s doctor on a British whaleship in the South Pacific in the 1830s. Dr. Bennett, a careful observer in the mold of Charles Darwin, described the pilot fish’s average size, eye color, number of stripes, and number of spines. Bennett reported that sailors knew them to accompany ships sailing the open ocean, but that they commonly were found around sharks. He looked into the nature of this relationship: was it parasitic, or did sharks somehow benefit from their presence? Bennett observed that the pilot fish could catch and eat food by themselves, so they did not need sharks. He also very much doubted the earlier stories that sharks needed the pilot fish to guide them, along the lines of human pilots who guide ships into port. Then again, Bennett had witnessed something in 1832 on a passage from India, in which he personally watched a lethargic shark pass by bait that the sailors had placed on a hook. The shark did not go after the bait until one of his two pilot fish had zipped out first to examine it. After the crew killed the shark, the two pilot fish remained with the vessel for weeks, even attending a small boat of theirs that went to and from another ship at sea. Modern scientists remain dubious of this relationship, however, believing that sharks don’t get much out of the partnership, except perhaps fewer parasites on their skin. The pilot fish get food scraps and protection from predators.

As he was writing Moby-Dick, Melville also read descriptions of the pilot fish in a published narrative by another naturalist named Francis Allyn Olmsted, who returned in 1841 from a whaling voyage to the Pacific after his graduation from Yale. Olmsted explained that pilot fish commonly seek shelter and food by living in the close vicinity of a large shark—“side by side with his ferocious mate”—as well as for days sometimes beneath the hull of a slow-moving ship. Pilot fish are known to align themselves with dozens of species of sharks, as well as large rays and sea turtles. Like several other species of fish, they also collect under large mats of sargassum or drift-wood to feed off the invertebrates growing underneath these floating ecosystems.

Most significant to our reading of this scene in Moby-Dick, Olmsted shared in his narrative, that it’s “a trick sometimes practiced by a brother whaler” to sail beside another’s hull to get a school of fish to leave and join their ship. Olmsted’s shipmates must have been bored or looking for some new fish to hook. Perhaps this is where Mel-ville got the idea and turned it into an omen, the first hint that sharkish Ahab’s attempt to find and kill the white whale is not going to end well—pilot fish are known to leave a host as it dies. 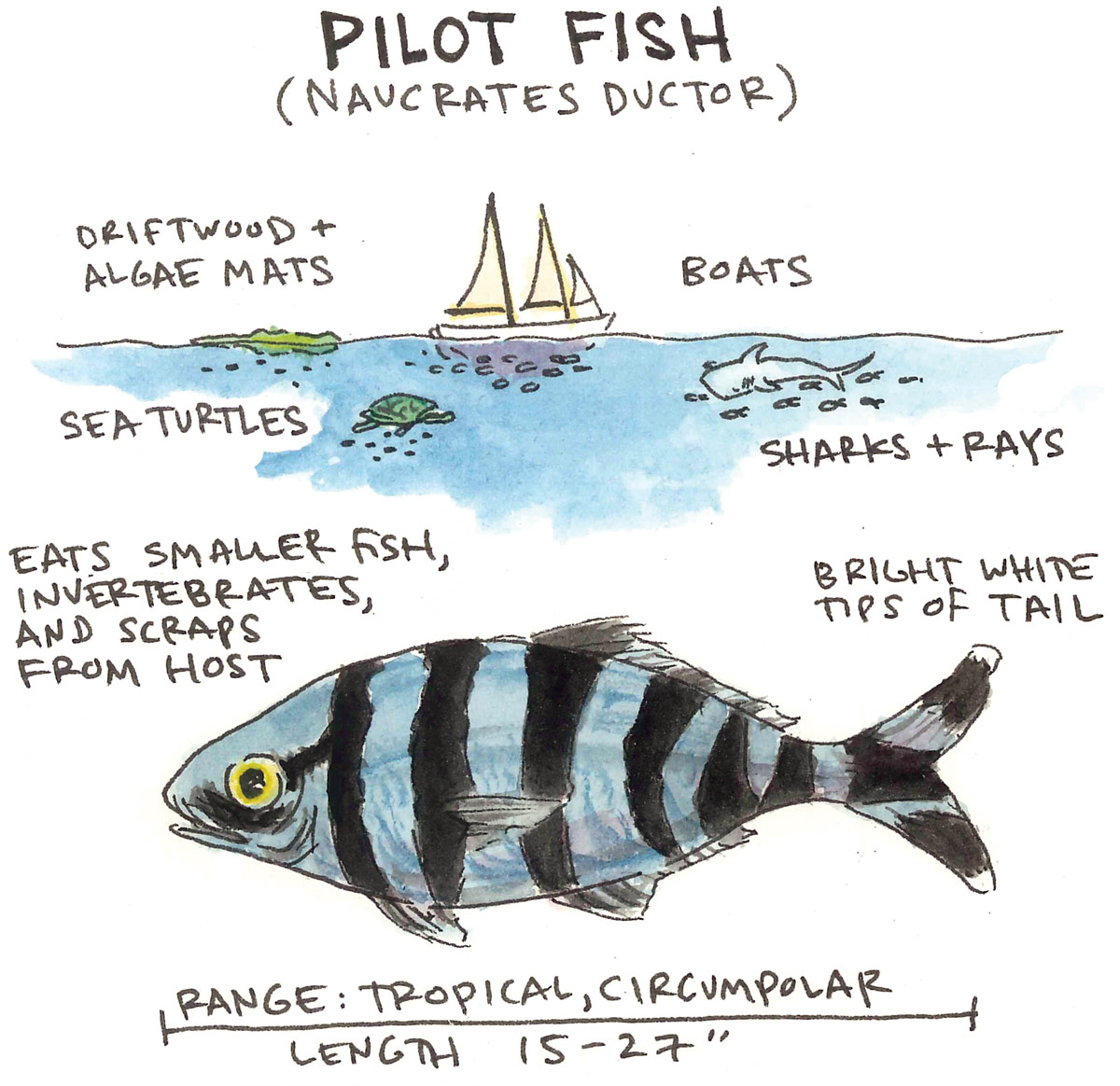