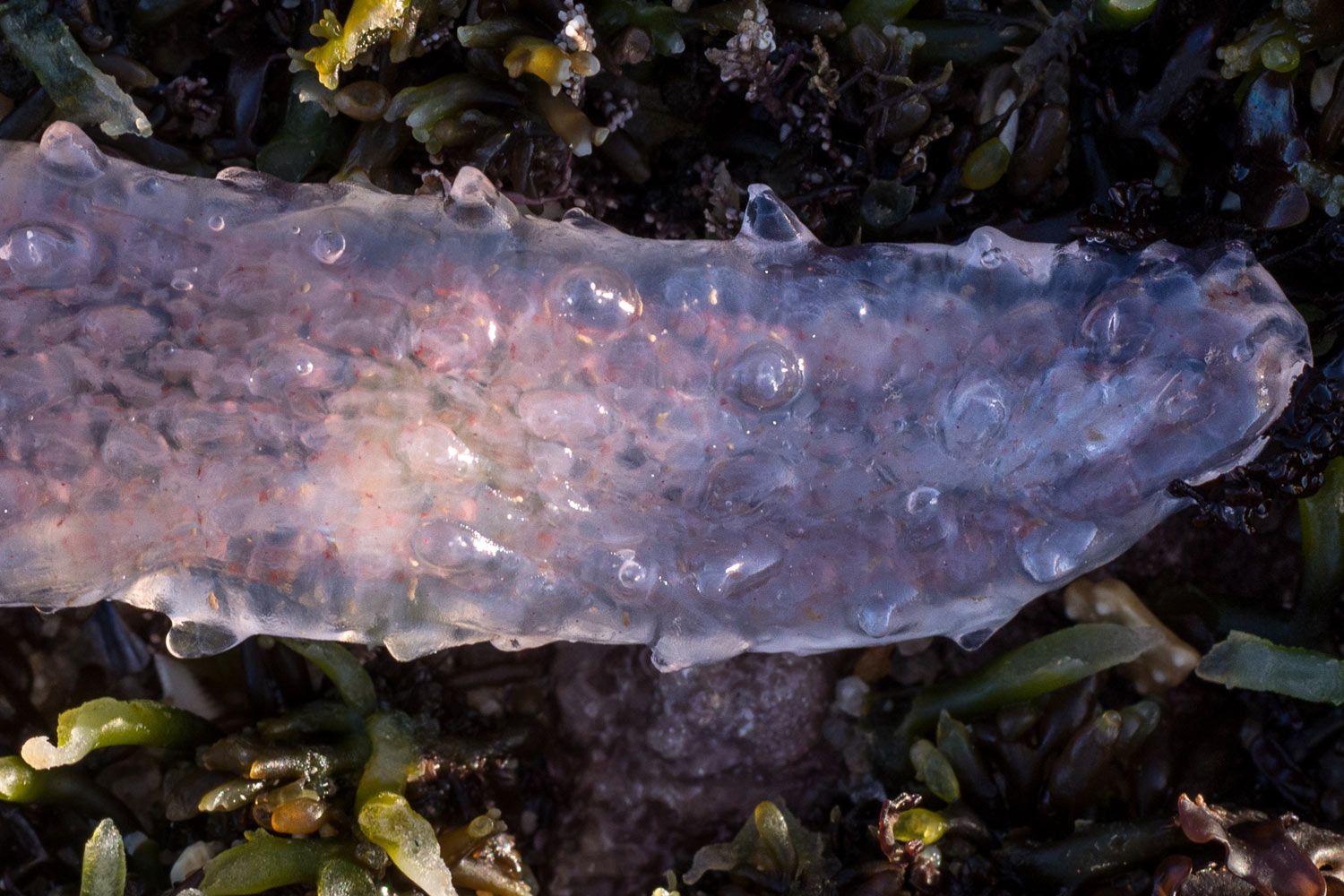 Scientific Name:
Pyrosoma atlanticum
Range from a few inches to up to 30" or more long.

On a recent sailing voyage aboard the oceanographic research vessel Robert C. Seamans, we scooped up an odd-looking animal that got everyone on board the ship excited. It was late in February, summer in the Southern Hemisphere, and we were about 100 miles off the northernmost tip of Aotearoa New Zealand, a point known as the North Cape.

Here we deployed a meter net, a long fine-meshed conical net with a 3-foot-wide metal ring that keeps the top open as it gets dragged through the water. For three nights in a row we sent this meter net down several hundred feet beneath the surface, towing it as we sailed very slowly along. Each time, when we hauled the net back aboard, we found inside a glowing clump of clear rubbery pickle-looking, um… thingies. 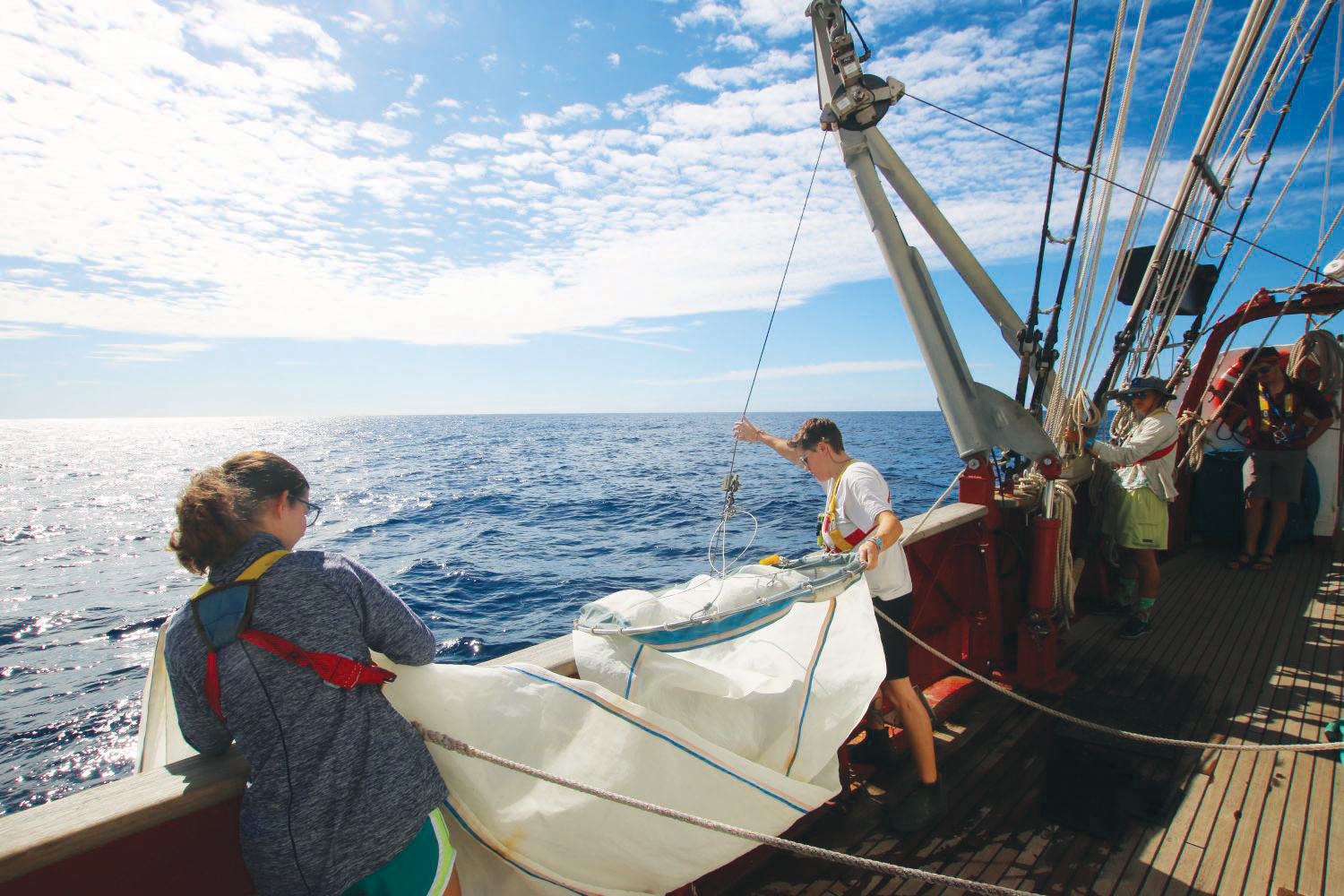 The thingies we captured in our net were colonies of living organisms covered by nubby spikes. Our chief scientist, Jan Witting, explained that each nubby spike is its own animal: a zooid with a simple brain, stomach, liver, and a basket with cilia that acts as a filter. All of these zooids, each a clone of its neighbor, connects to the others with a clear gelatinous material that forms a firm sock-shaped colony, which opens on one end. 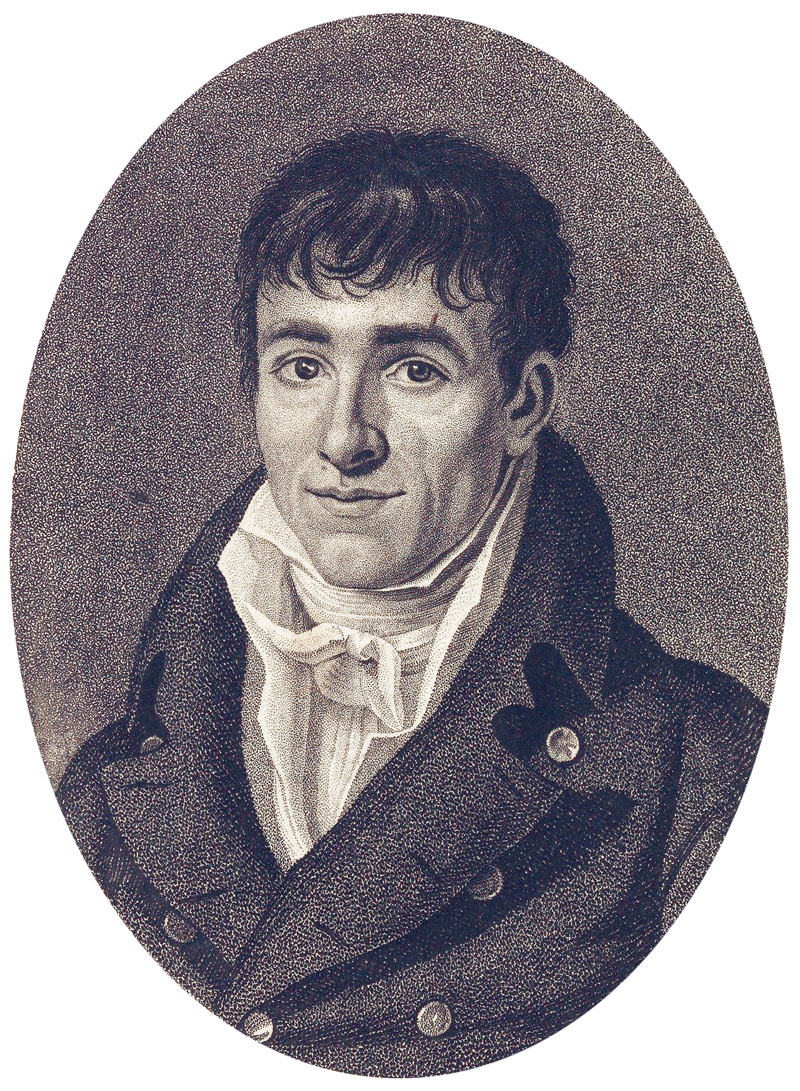 French naturalist François Auguste Péron was the first to formally describe and name the pyrosomes.

These colonial organisms are pyrosomes. The first Western author to describe and formally name what some sailors called “sea pickles” or “sea cucumbers” was the French explorer and naturalist François Auguste Péron, who in the early 1800s encountered a large patch of them one night at the surface in the equatorial Atlantic. “Heightened by the surrounding circumstances,” he wrote, “the effect of this spectacle was romantic, imposing, sublime, riveting the attention of all on board.” Péron brought several specimens on deck, all between 3 and 7 inches long. He described their anatomy, tested their bioluminescent properties, and gave them their scientific genus name of Pyrosoma, which means “fire body” in Greek.

In the decades to follow, other sea-going naturalists wrote about pyrosomes with similar poetic awe. American Francis Allyn Olmsted said that when big seas crashed over the rail, the jelly-like creatures rolled around the ship’s deck like “a fire-ball.” In 1849 T. H. Huxley wrote in his diary or the “beautiful Pyrosoma” that were “shining like white-hot cylinders in the water.” 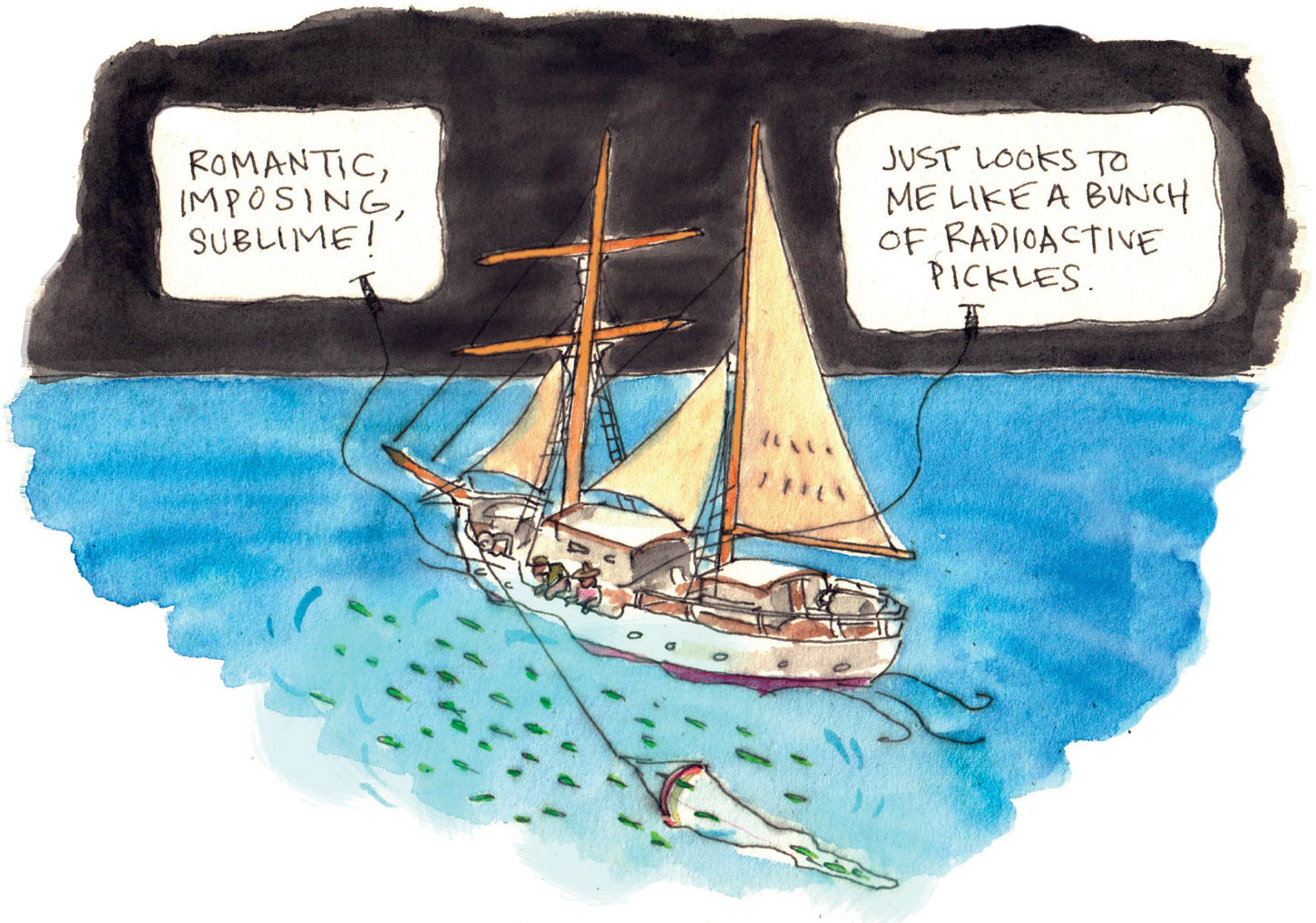 An English surgeon named Frederick Bennett left one of the most colorful published descriptions of pyrosomes. Bennett was generally not prone to absurd exaggeration, yet he seemingly could not help himself when it came to writing about pyrosomes. Like Péron, Bennett found them in enormous numbers in the equatorial Atlantic. The pyrosomes were in “their zenith of splendor,” he wrote, aggregating in such densities that the whalemen could fill any number of buckets with them and that the mass of pyrosomes created such a glow in the water that the animals rendered “all surrounding objects visible during the darkest night, and permitting a book to be read on the deck, or near the stern-cabin windows of a ship.”

Pyrosomes float freely at sea, anywhere from at the surface to as far down as 3,000 feet. They are filtering organisms, joined together in a common body to move around and thus have better access collectively to capture phytoplankton and then excrete water and waste out their common core. This collective filtering helps them move their body along, allowing them to control a bit of their vertical motion and even forward propulsion. Each individual zooid has what scientists believe to be cells with bioluminescent bacteria within a pair of organs. The pyrosome’s famous bioluminescence has been recorded as a range of blues, greens, and pinks. The glow helps them attract phytoplankton toward their collective body and perhaps communicate with their fellow zooids to adjust their vertical motion up or down the water column based on the movements of their food sources—usually in response to the sun—and perhaps to escape ending up a snack for turtles and dolphins. 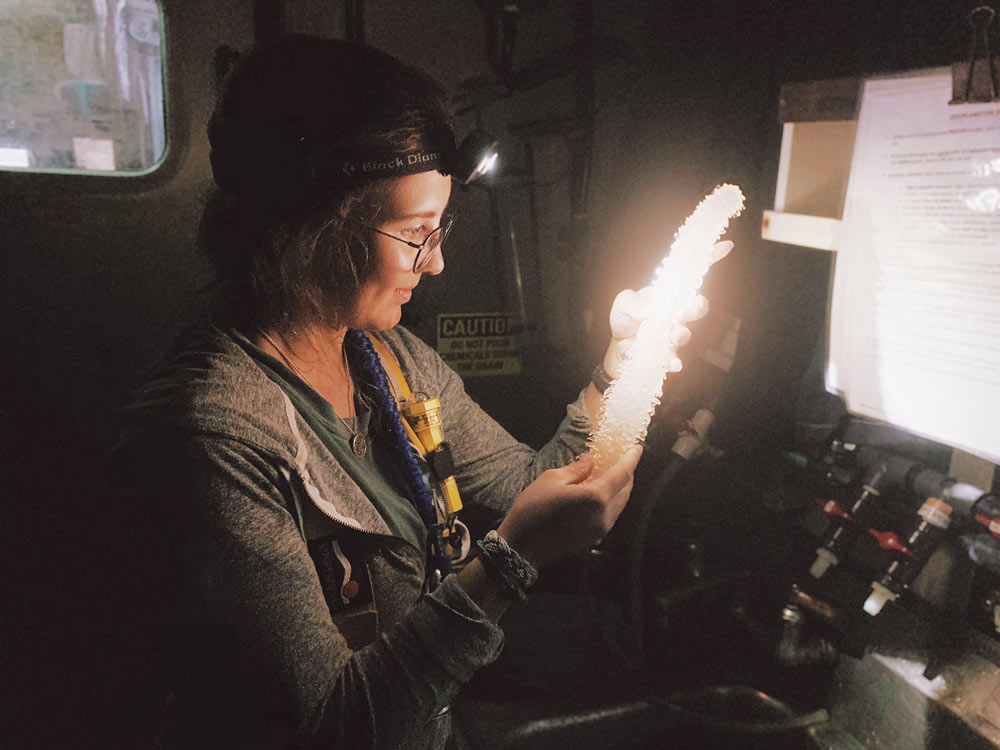 Marine scientist Ella Cedarholm uses her headlamp to illuminate a recently caught pyrosome in the lab on board SSV Robert C. Seamans.

For our part, we kept one of our largest pyrosomes in a bucket. By the next day it was no longer clear, but had turned orange and more rigid, looking and feeling more like a dog toy. The waters north of Aotearoa New Zealand, where we sailed during those three nights, are famous for exceptionally large pyrosomes. The longest we caught was about a foot long; our chief scientist onboard told us that on a previous voyage in these waters, the ship had sailed over pyrosomes bigger than boulders—so large that the crew thought at first they were about to run aground. Since Péron’s day, marine biologists have since identified several different species of pyrosome, which include individuals that grow to enormous lengths.

In 2018, a few hundred miles to the south of where we sailed, two SCUBA divers happened upon one of these giant pyrosomes that was more than twenty-five feet long. In 1969, even closer to our track, biologists found one that was about thirty feet long with a diameter of three feet! It’s enough to make a sailor run out of…er…glowing terms.