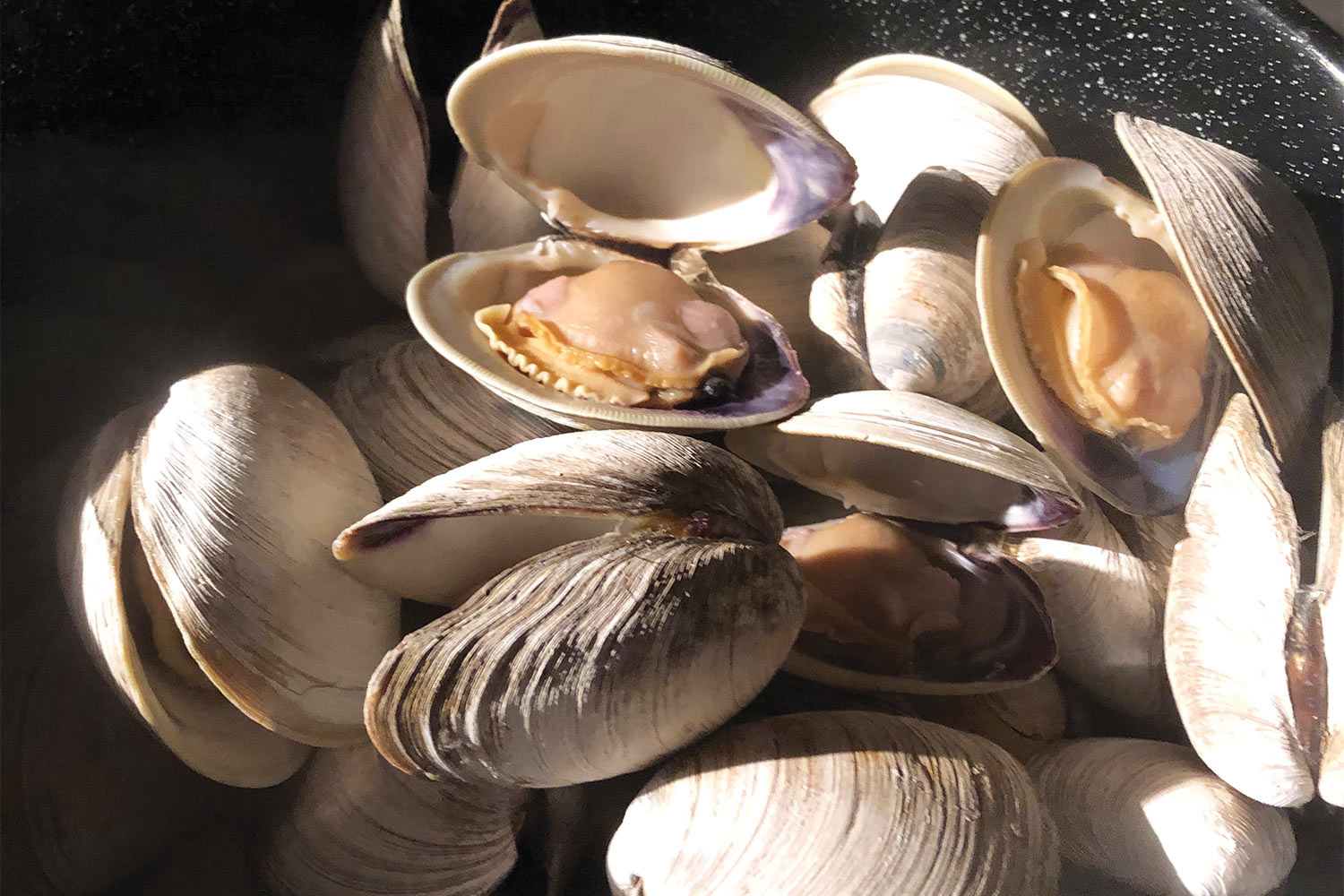 The quahog, a clam, has had a diverse role in human history, but it’s one that has often been misunderstood. Pronounced kō-hog—derived from the names common to Native American tribes of the region, like that of the Narragansett, who call the animal poquaûhog—this clam is a bivalve invertebrate with gills, a liver, a heart, and two oval shells connected with a thick hinge. Quahogs dig themselves just below the surface of the seabed, then they send up two straw-like tubes: one to inhale sea water for oxygen and microscopic plants, and the other to exhale that water and waste materials. Since quahogs prefer warm, muddy, or sandy bottoms, they’re usually found in shallow bays along the coast and the mouths of rivers. 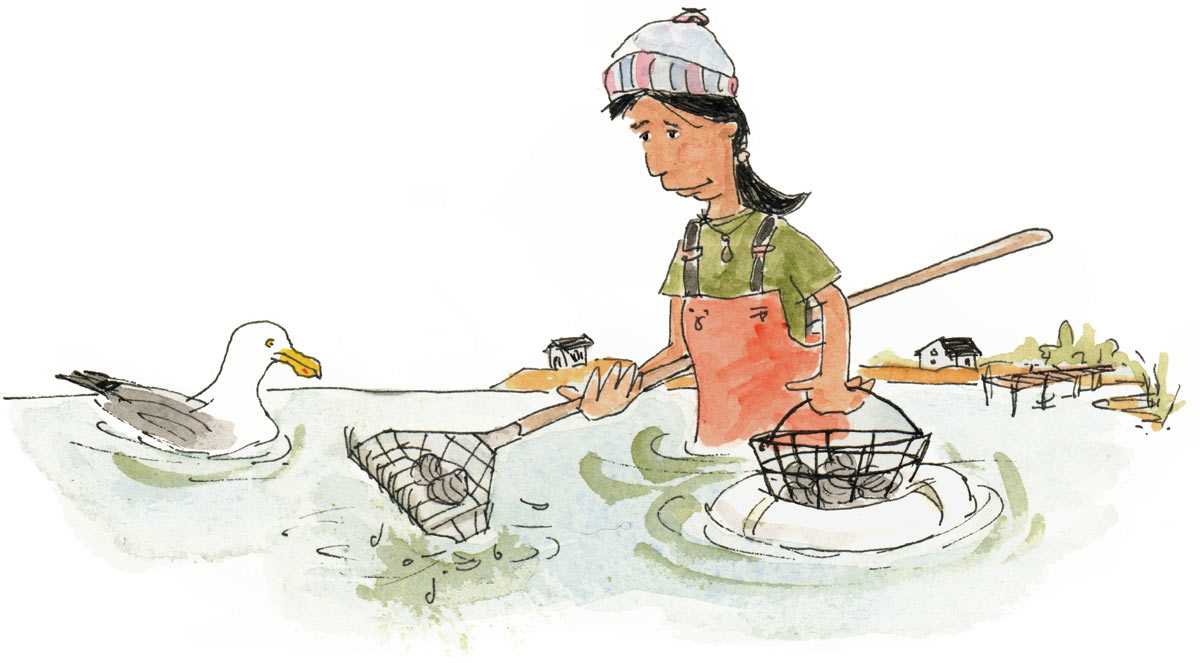 Quahogs only live along the North American east coast and the shores along the Gulf of Mexico. Marine biologists identify two species: the northern quahog ranges from the Canadian Maritimes down to Florida, while the southern quahog lives off Florida and around the Gulf of Mexico. The northern quahog’s shell is generally smooth on the outside and usually has that famous purple edging and swirls on the inside. The southern species has rough, more pronounced ridges on the outside of the shell, and its inner shell is usually entirely white.

In 1758, Carl Linnaeus of Sweden coined for this particular clam the species name mercenaria. “Mercenaria” is from the Latin for wages or a hired worker. Linnaeus must have read about how beads made from this clam’s shell, “wampum,” had been used as a type of money.

Unfortunately, this connection between the quahog clam, wampum, and currency has been oversimplified. To start, the word “wampum” is taken from an Algonquian word, wa” pa” piag, which meant specifically a string of shell beads that were only white. Colonists reduced the term to simply refer to all beads. More importantly, for Native American tribes in this part of the world, this clam is foremost a source of food and spiritual connection. Historically, Native people crafted quahog shells into scrapers to carve wooden boats and bowls, and into eating utensils, trowels, and even into tweezers.

Beyond valuing quahogs for food and tools, Wampanaog and other Native American tribes used the shells to make beads and other forms of art. Oral histories and archaeological excavations reveal that Wampanoag ancestors and other Algonquin peoples have eaten quahogs and made beads from the shells for more than 4,000 years. The women in these coastal communities, especially during the centuries of European colonization, became the primary gatherers of shellfish to feed their families, as well as working as artisans to create wampum. When European settlers arrived, quahog beads began to serve as a convenient way to barter, a substitute for coins when trading, but this was only a late and very brief development in North American history.

To create wampum, pieces of the shell are carefully broken, filed, and smoothed into tubular beads, then painstakingly drilled into each end of the bead to make the hole. Only a couple of beads can be made from a single shell, so hundreds, sometimes thousands of quahogs need to be harvested and crafted to make a large wampum adornment for the wrist or neck, or for a long sash or belt. Although people have worn wampum jewelry or adornments informally, wampum garments have traditionally been created for sacred reasons and for storytelling. Some of these individual works of Native art have lives of their own for particular communities, similar to the life of a document like the Declaration of Independence or the passing down of a family Bible or Torah. Wampum belts are often too large or beautiful to be worn on a regular basis. They have been used as invitations to formal events, to document and signify treaties, to declare alliances, and to commemorate family and community connections. 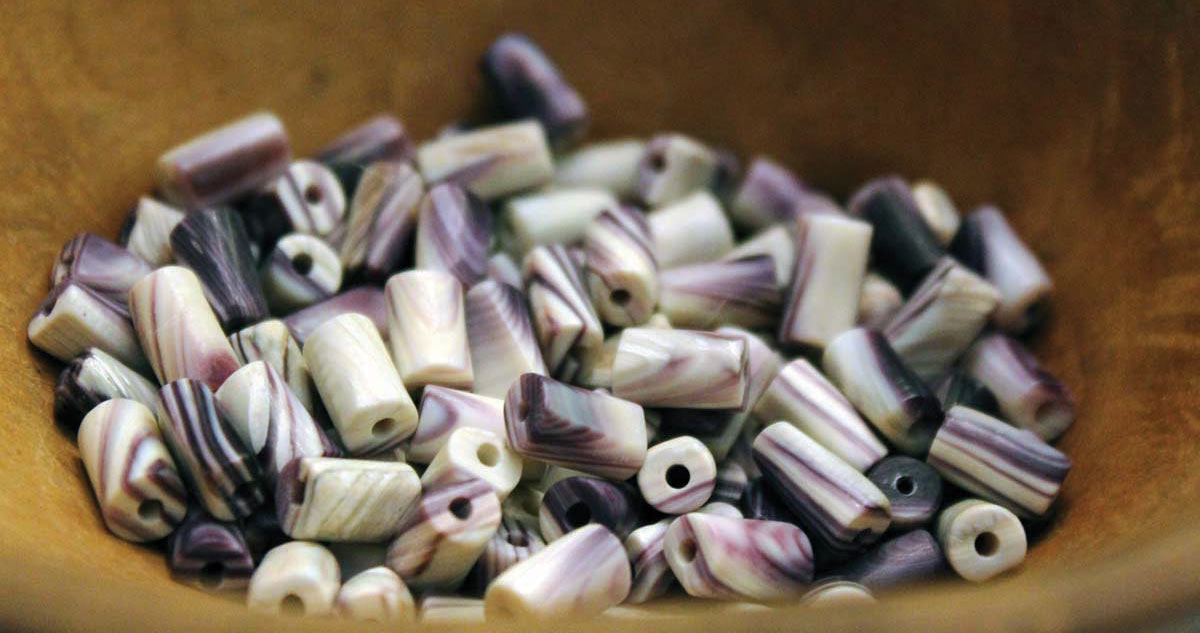 Wampum, tubular beads, are a Native art arrival to Cape Cod. This wampum belt, form for decoration, community building, and story-telling. For a relatively short time, wampum was used as a form of currency when Native tribes wanted to trade with colonial settlers. Photo courtesy Smoke Sygnals. 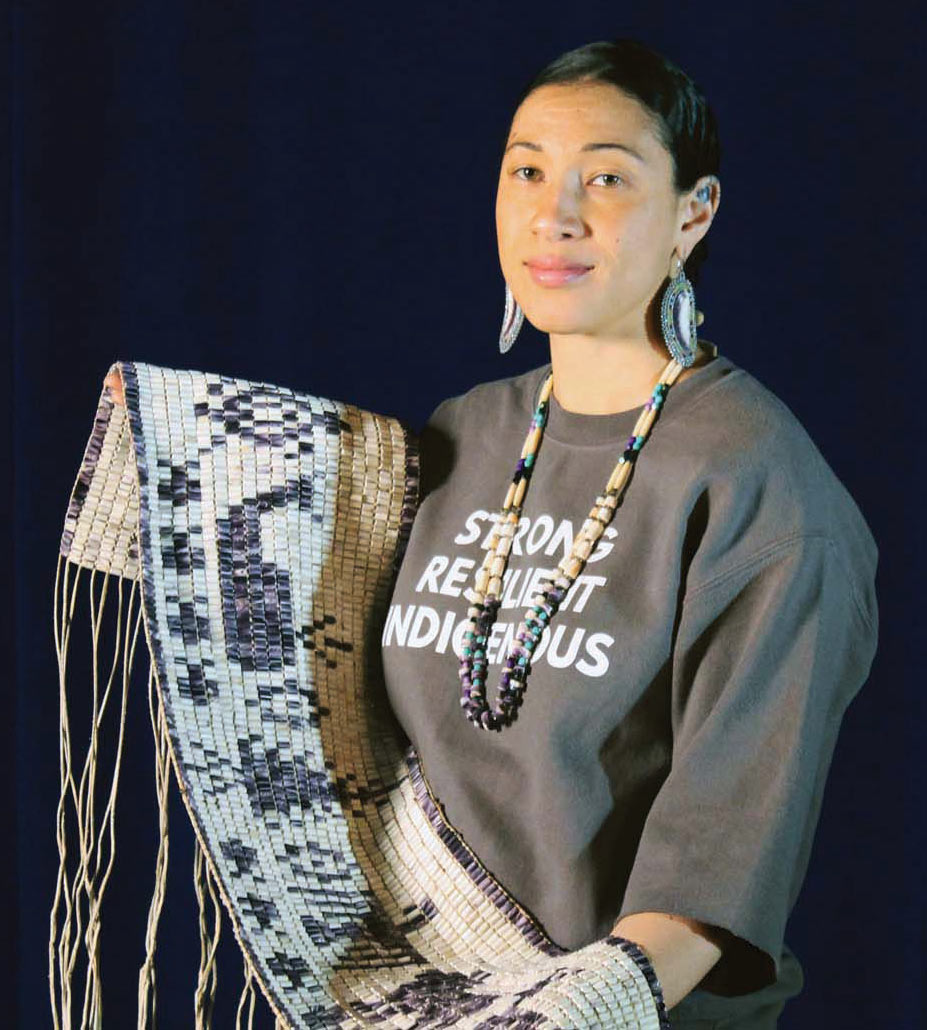 One of the most meaningful and earliest-described wampum belts, of the treaty type, is known today as the “Two Row Wampum,” explained in the oral history and transcribed speeches of the Haudenosaunee (Iroquois). Their leadership had achieved remarkable peace among themselves, uniting multiple tribes. In 1613 they then negotiated a treaty with the Dutch, presenting these new settlers on the Hudson River with the Two Row Wampum to commemorate the agreement. On the belt, two bands of purple beads ran parallel on a white-beaded river, one band representing the Dutch ship’s path and the other a Native canoe’s path, each riding parallel but on their own as equal, autonomous, and peaceful nations.

Today, quahog remains a prized food, fishery, and medium of artistic expression throughout the ancestral territory of the Wampanoag, Narragansett, and Mashantucket-Pequot tribes, among others. In 2020, over 100 people of the Mashpee-Wampanoag tribe, led by Paula Peters and Linda Coombs, created an ornate wampum belt to tell a story and revive the tradition of creating wampum within their community, and to serve as the leading object of a traveling exhibit in the UK that was interpreting the 400th anniversary of the Mayflower’s arrival to Cape Cod. This wampum belt, made with nearly 5,000 quahog beads, was also created to raise awareness for their search for an exceptionally significant belt, worn by their ancestor Chief Metacom (King Philip), which was stolen after he was murdered in battle. It is possible the belt, made of quahog shell, is still somewhere in England. 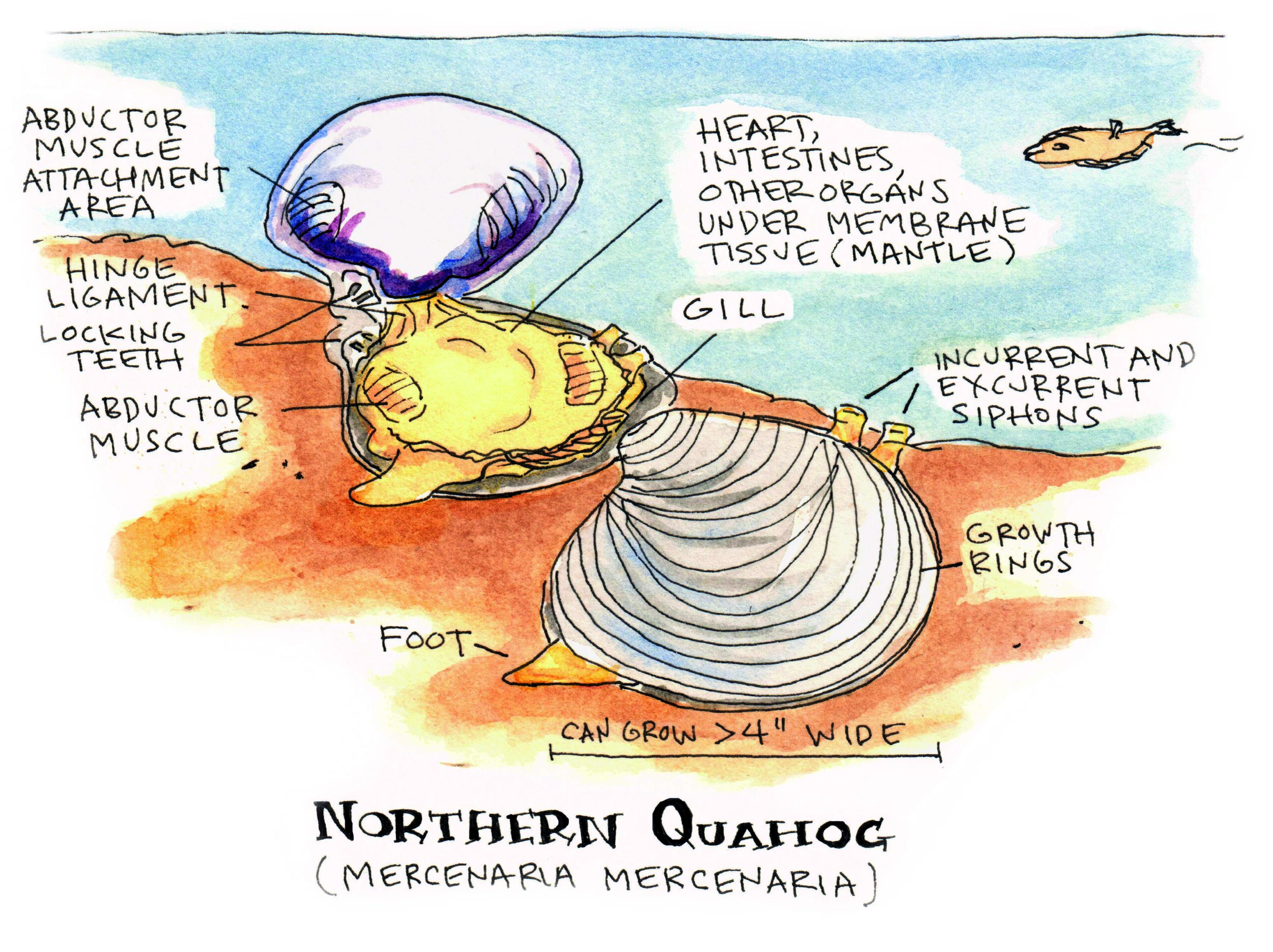 Thank you to Paula Peters for help with this story. See more Animals in Sea History or educators.mysticseaport.org.