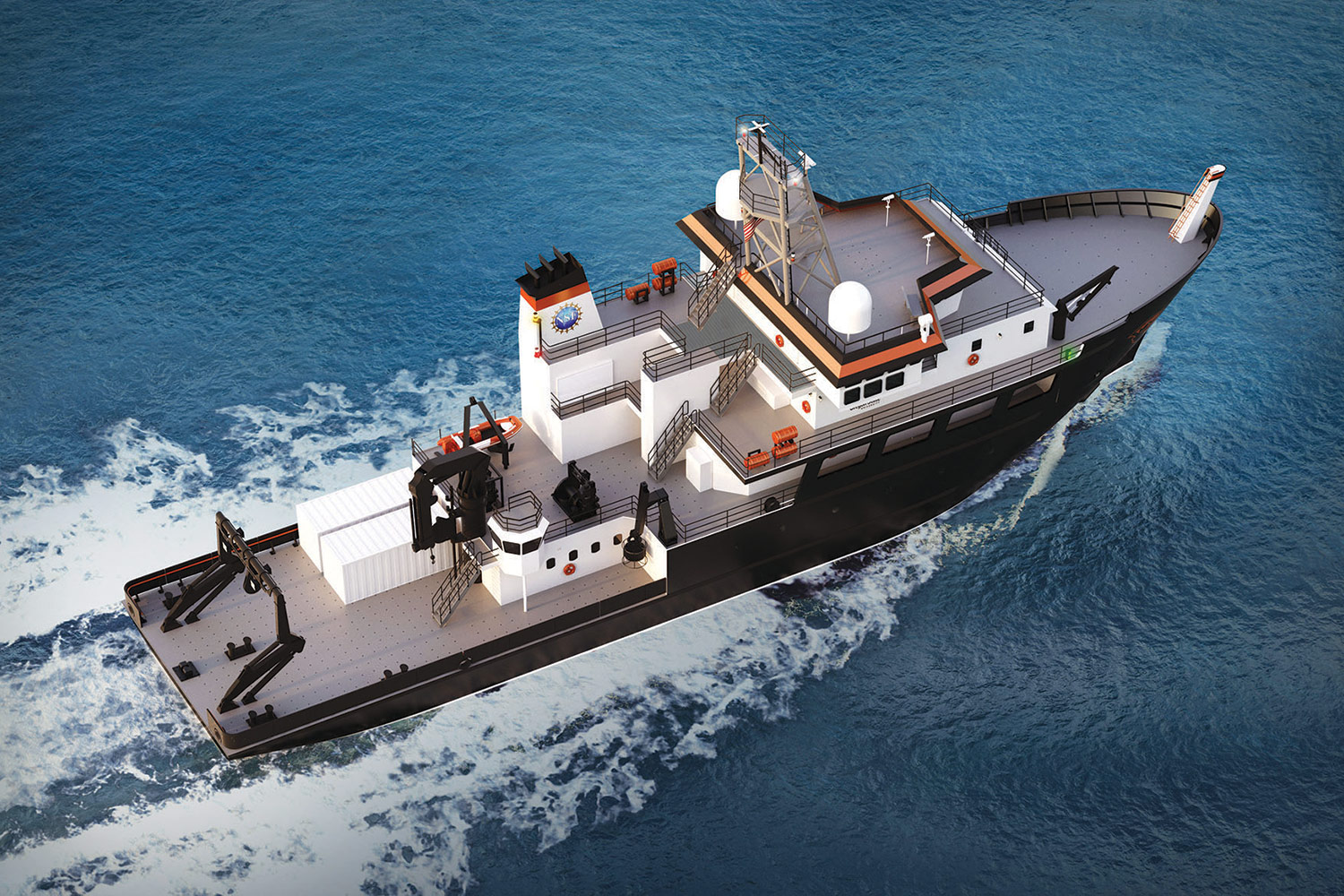 RCRV does not stand for Really Cool Research Vessel, but it could… 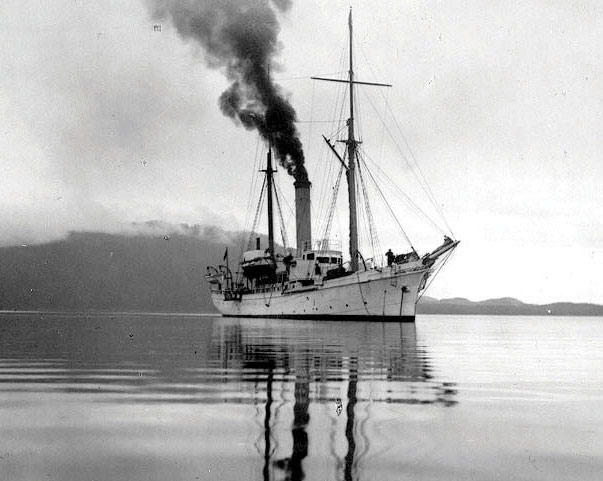 The Albatross was a United States Fish Commission (USFC) research vessel built in 1882. An iron-hulled steamship rigged with auxiliary sails, Albatross was the first ship ever built specifically for marine research. Photo provided by US Bureau of Fisheries.

One of the most important pieces of equipment used by oceanographers is the research vessel, a ship that serves as a floating lab and a home-away-from-home for marine scientists. While satellites orbiting the earth and buoys moored to the seafloor can collect oceans of data about our oceans, scientists still need to go to sea to collect the data they need and make first-hand observations to better serve their research questions.

Research vessels range from small inflatable boats that hold only a few people, to massive polar ice breakers nearly 400 feet long. Somewhere in the middle is the regional class research vessel (RCRV). This type of ship typically operates in the coastal ocean, ranging from nearshore to the edge of the continental rise before the ocean floor slopes down to its deepest depths.

Oceangoing research vessels have come a long way in the last couple of decades, from wooden sailing ships outfitted for distant deep-sea expeditions, such as HMS Beagle, which carried Charles Darwin to the Galapagos and around the world, to modern steel high-tech vessels purpose-built for doing oceanographic research. Today’s scientists are studying all aspects of the marine world, including, but not limited to, marine biology and coral reefs studies, geology of the seafloor, climate change, bathymetry, geochemistry, and even shipwreck archaeology—you name it.

Marine scientists are pretty excited about three new research ships that are being built right now with funding provided by the National Science Foundation (NSF). Oregon State University is overseeing the design and construction of the vessels, which will be the newest generation of RCRVs for the United States scientific community. The first of the three 199-foot ships will be run by Oregon State, with the others to be operated by research institutions and universities on the East and Gulf Coasts.

Oregon State University’s new vessel will be named Taani, a word used by the Siletz people of Oregon meaning“offshore.” Construction of Taani was started in November 2018 in a shipyard in Houma, Louisiana. The ship will be launched some time in 2020 and delivered to OSU for testing in 2021. Here are some of the features that will make Taani and her sister ships so special. 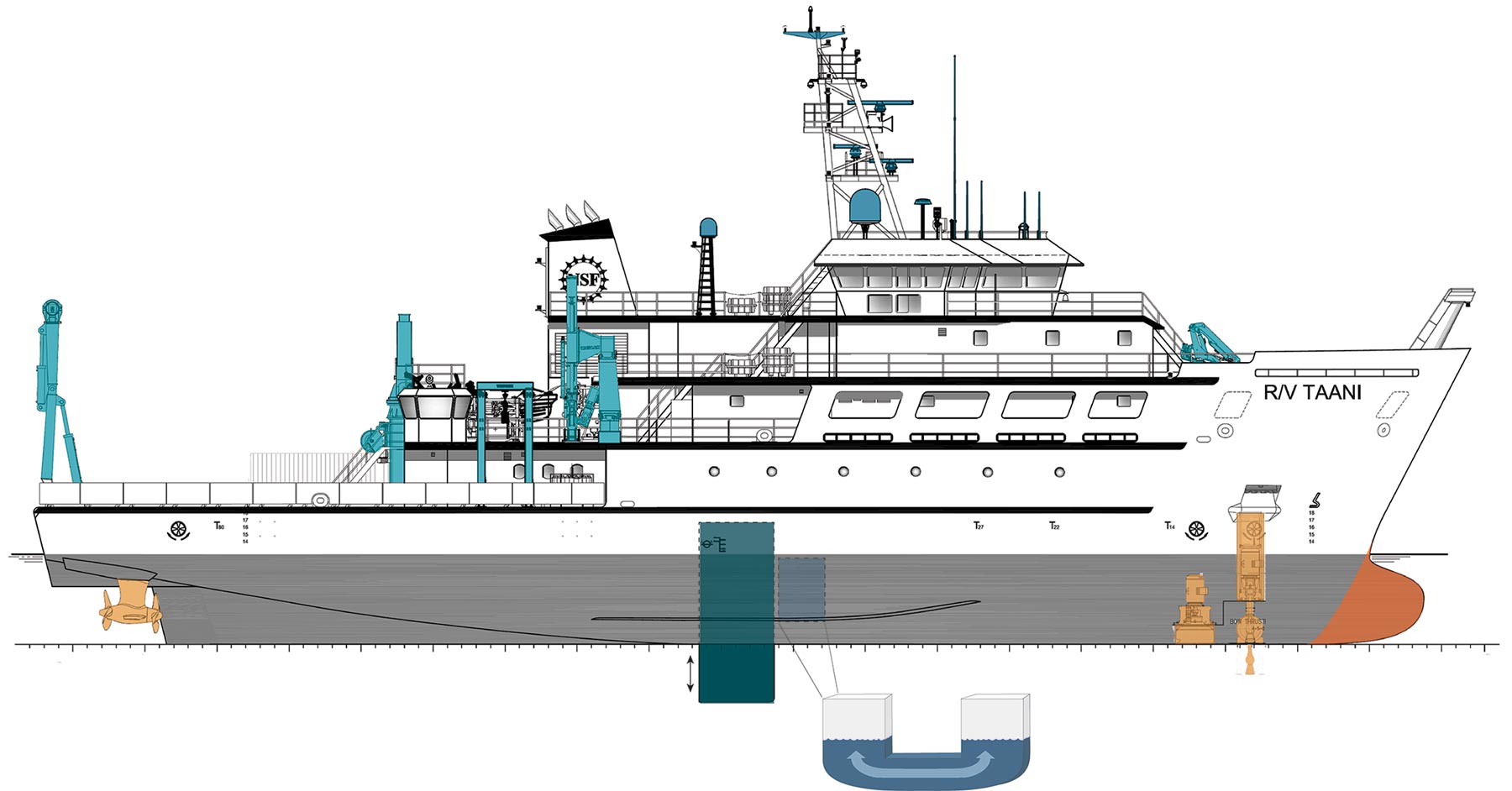 Research vessels need to be able to deploy and retrieve various types and sizes of equipment safely and accurately. The aft deck of Taani will be equipped with a flexible, multi-jointed “A-frame” crane for deployment of nets and other sampling equipment. Amidships on the starboard side (translation: in the middle of the ship on the right side), the ship will have an advanced robotic arm that, with a push of a button, will be able to deploy oceanography tools to measure temperature and salinity, or launch and recover underwater robots.

Many oceanographic operations require the ship to remain still or follow a precise straight path as data is collected, but this stability can be difficult to achieve because the ocean is always in motion. The RCRVs will include a state-of-the-art system to help them hold still, to “hold station.” This dynamic positioning system will include two sets of twin thrusters—one in the stern and another in the bow—to increase its maneuverability. The computer-designed propellers on these thrusters will behave more like wings than traditional screw-type propellers and operate very efficiently.

Wouldn’t it be useful (and really cool) if you and your teachers could see and use the information being collected by scientists aboard Taani as it’s being collected? Or talk to the scientists aboard while they’re working? All of this will be possible, thanks to the advanced “datapresence” technologies installed on the ship, which will enable transmission of many kinds of data from ship to shore. Scientists on shore will be able to participate in research projects remotely, and teachers—maybe yours!—will be able to display real-time ocean data in their classrooms or have direct interactions with scientists working at sea.

Being honest here—the rolling motion of a ship out at sea can cause even the most stout-hearted scientists to toss their cookies (that’s a technical term). Aside from people’s physical discomfort, rolling can also make it difficult and sometimes dangerous to deploy and retrieve instruments. To minimize rolling, a large, U-shaped tank within the hull will use gravity to slosh water from side to side, counter to the ship’s natural roll frequency. The shifting water weight minimzes the ship’s roll, making operations safer and more comfortable.

OK, we know. It looks a little like a clown nose, but it has a purpose. The ship’s protruding bow improves the vessel’s hydrodynamics, helping it move through the water more smoothly and improve its fuel efficiency.

Various sensors and instruments can be placed on this retractable centerboard, depending on the ship’s specific mission. These instruments can identify schools of fish and other organisms, measure currents, capture images of the bottom of the ocean, or even talk to swarms of small underwater robots. 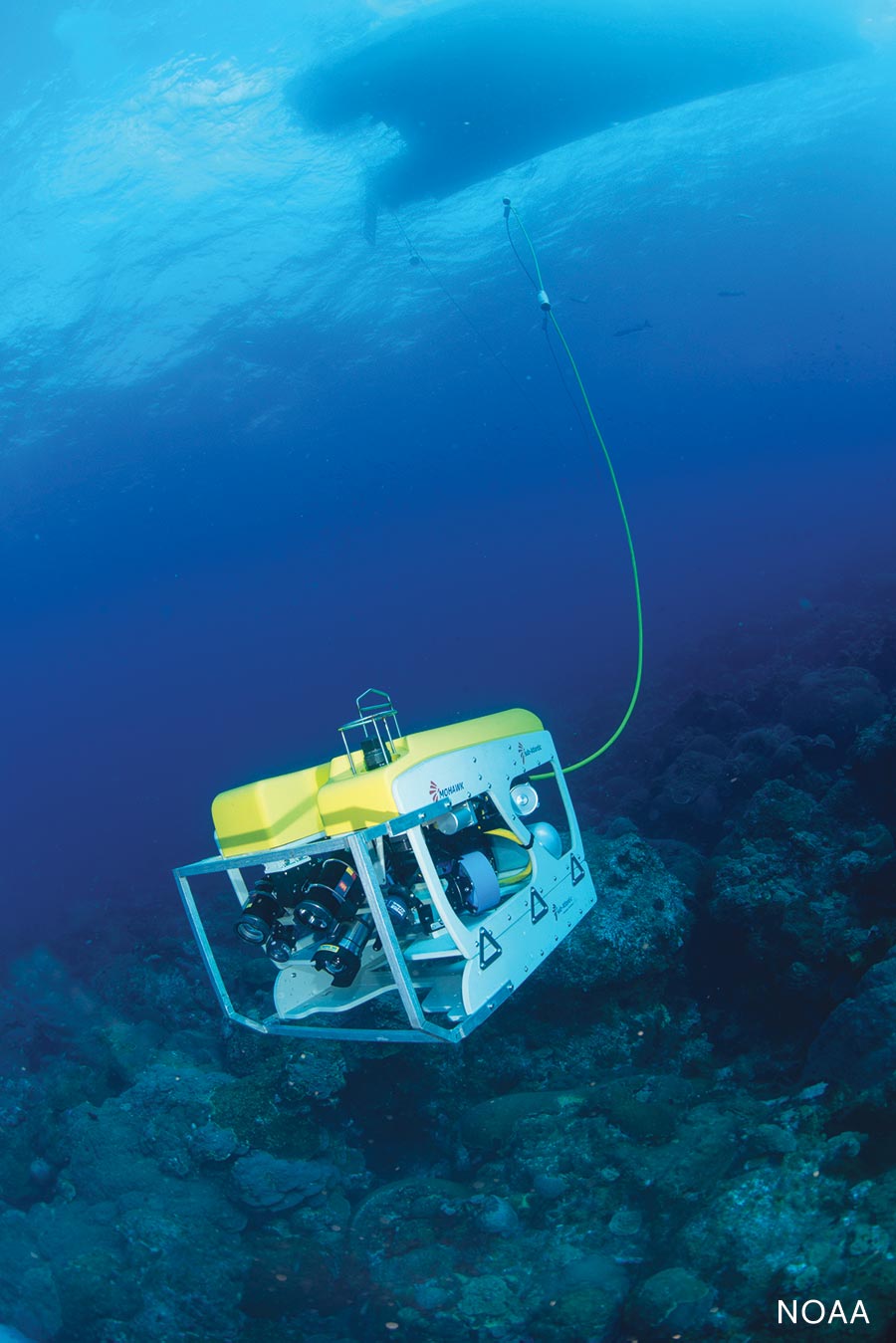 You don’t have to wait until college to start working in the marine science field, nor do you need to live anywhere near an ocean. There are more and more programs for high school students to study and get hands-on experience in marine science being developed through your school’s STEM or STEAM program.

Remotely operated vehicles, or ROVs, are underwater robots that allow scientists to explore the ocean without actually getting in the water. ROVs are controlled by a person, usually on a surface vessel, using a joystick in a similar way that you would play a video game. A group of cables connects the ROV to the ship, sending electrical signals back and forth between the operator and the vehicle. ROVs range in size from that of a small computer to a small truck. The larger ones are very heavy and need other equipment such as a winch or a crane to put them over the side of a ship and into the water. 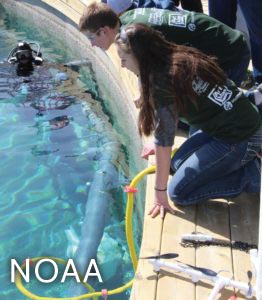 Each year, the Marine Advanced Technology Education (MATE) Center sponsors ROV competitions all around the country, where student teams build their own ROVs, either from a kit or from scratch of their own design, and then compete against other teams doing a series of tasks, either in a pool or a tank. If your school does not have an ROV club, ask your science teacher if you can start one. The MATE Center offers regional mentors, kits, and information on their website at www.marinetech.org.