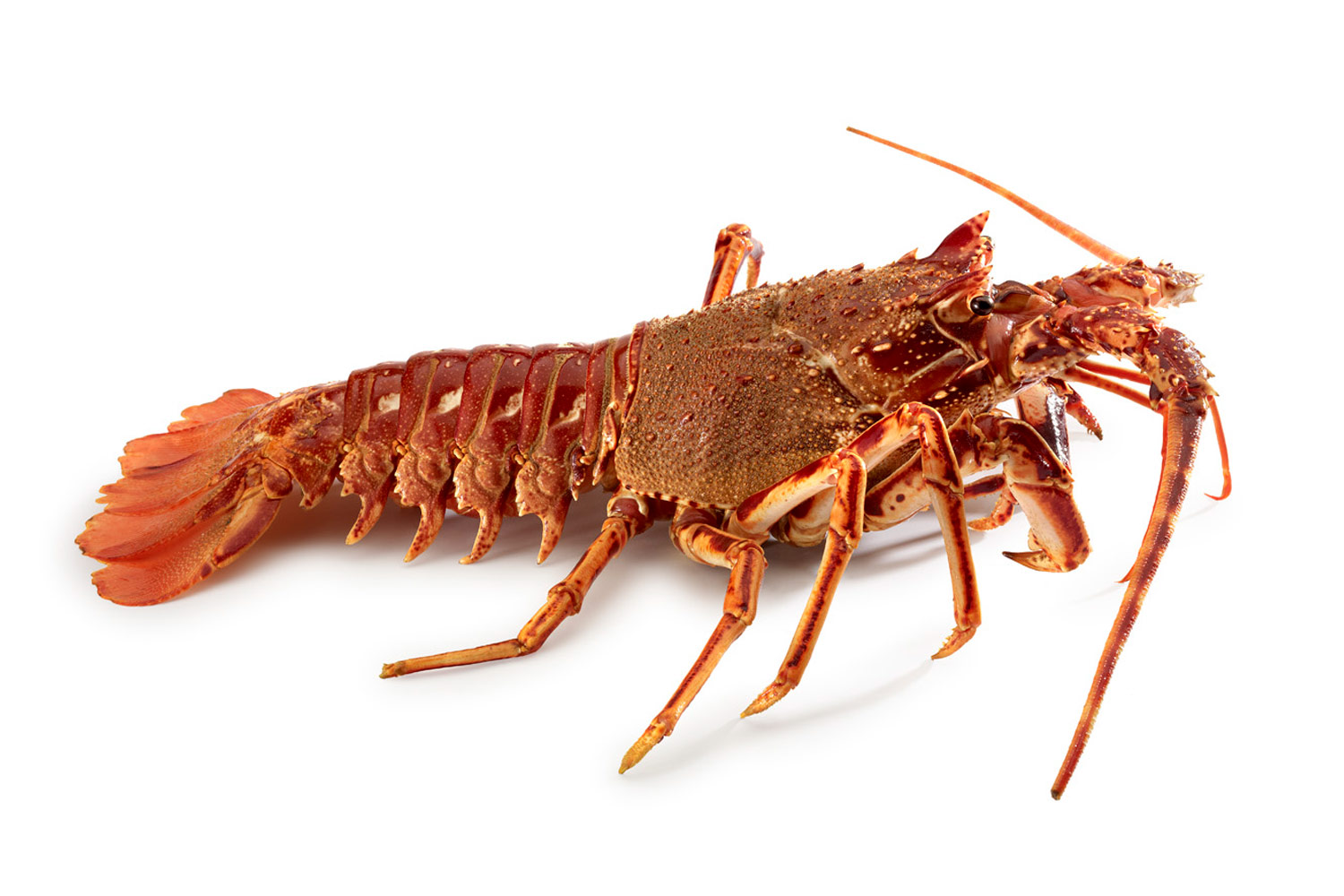 Scientific Name:
Jasus Frontalis
Spiny Lobsters grow up to 19 inches in body length, with ten walking legs and ten swimmeretts under the abdomen for movement, cleaning, and, if female, holding eggs. They can live in water as deep as 650 ft.

Daniel Defoe based some of his novel Robinson Crusoe (1719) on the real-life experience of a Scottish sailor named Andrew Selkirk, who was marooned on one of the Juan Fernández Islands, far out in the Pacific during the early 1700s. After more than four years of living alone on the island, Selkirk was rescued when the English privateer Woodes Rogers, in charge of the ships Duke and Duchess, stopped at the island for fresh water.

Rogers wrote: “Immediately our Pinnace return’d from the shore, and brought abundance of Craw-fish, with a Man cloth’d in Goat-Skins, who look’d wilder than the first Owners of them.” 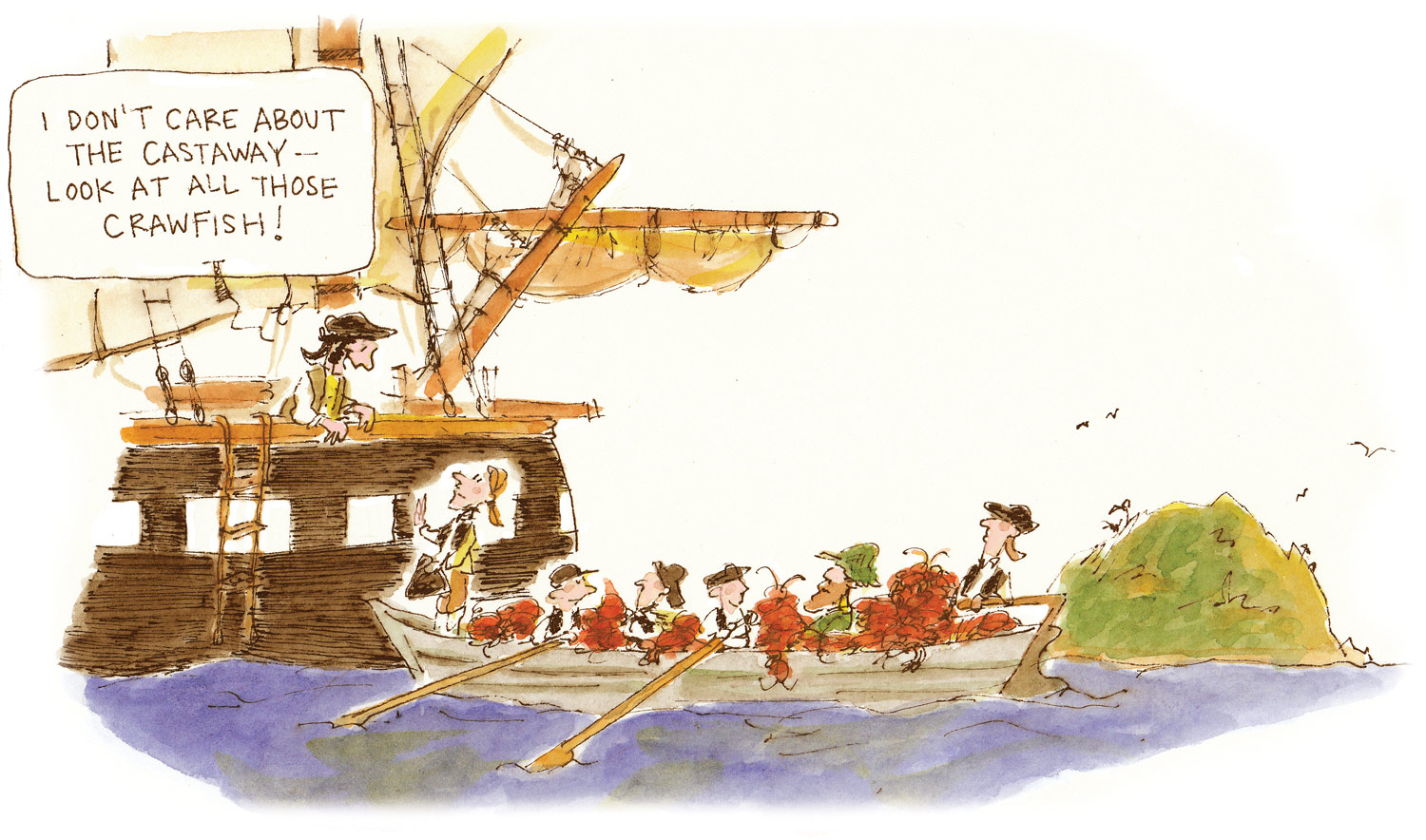 Rogers hired Selkirk on as a mate on the ship, allowing the castaway to eventually return to his home. The story of Selkirk’s time on the island has often been told, as has his return to Scotland. What interests us here, though, is why was the boat filled up with “Craw-fish?”

The crawfish the sea captain described were not the small crustaceans that are so famous in Alabama or Louisiana. These were Juan Fernández spiny lobsters. This animal is found only around the coasts of these remote islands, but there are dozens of similar species of spiny lobster crawling on ocean bottoms throughout the world, usually living in warmer climates than their larger cousins, the clawed lobsters. Spiny lobsters look nearly the same, but they have longer, thicker antennae, and they use sharp spikes on these antennae and on their shells for defense, instead of the big front claws that seafood restaurants serve. Nearly all species of spiny lobsters are more colorful than their clawed relatives, and some have enough spots, stripes, and vivid colors to rival your jazziest tropical fish. Even today, fishermen in England, Australia,
and other English-speaking countries call spiny lobsters “crawfish” or “crayfish,” or sometimes “rock lobsters.” 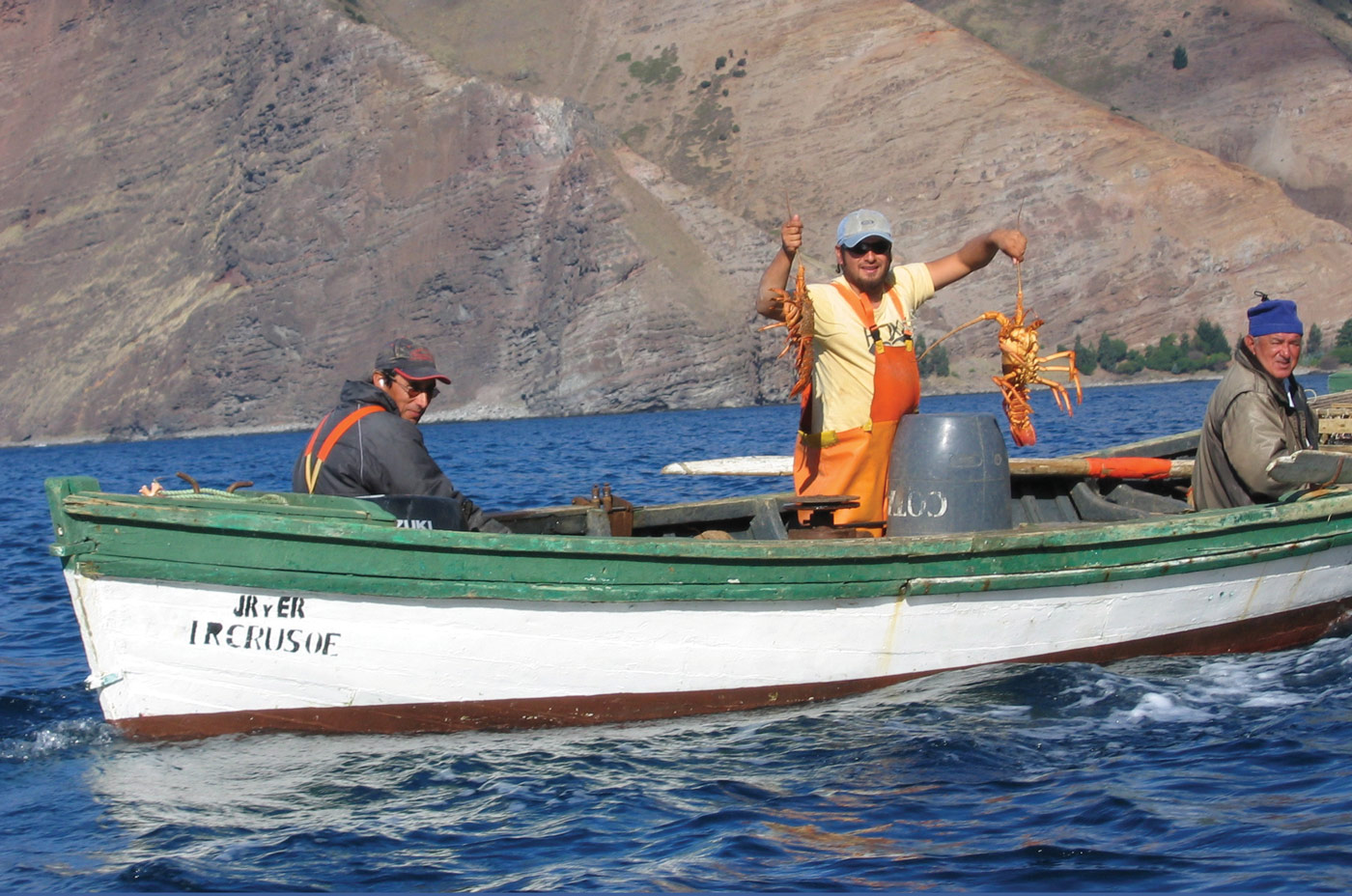 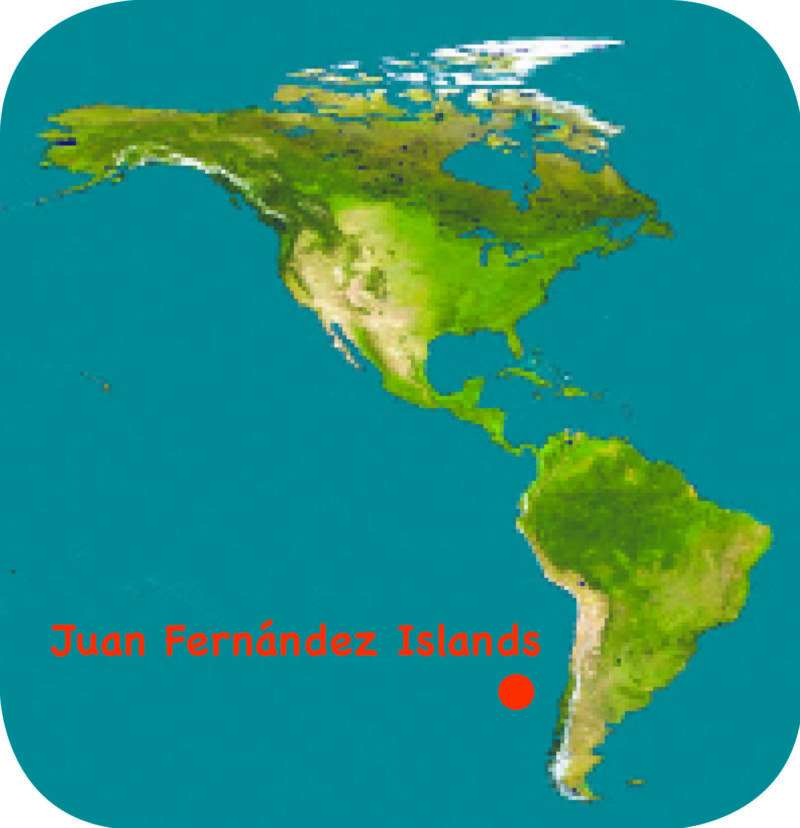 All across the Pacific, mariners and explorers have regularly praised both the abundance of spiny lobsters and their taste. Joseph Banks, who sailed with Captain Cook, claimed “sea crawfish” as one of the greatest luxuries of New Zealand, and he wrote about how the Maori found them on the bottom by using their feet. When adventurer Thor Heyerdahl was sailing across the Pacific during the Kon-Tiki expedition of 1947, he also saw people catching spiny lobsters with their feet—the women of Easter Island were catching them at night using their toes.

British mariners often wrote specifically of the spiny lobsters of the Juan Fernández Islands. Visiting in the 1740s, the Royal Navy commander Lord George Anson proclaimed these lobsters the best in the world, with individuals regularly weighing eight or nine pounds (a lobster at a restaurant today is normally between one and one-and-a-half pounds.) He wrote that so many lobsters lined the sea floor that when the sailors were maneuvering their boats on and off the beach, they couldn’t help but stick the animals with their boat hooks. A century later, Lieutenant Frederick Walpole of HMS Collingwood wrote about five-pound lobsters off the islands and of how much fun the crew had catching them while at anchor. Walpole wrote: “We had crawfish for breakfast, crawfish for dinner, crawfish for supper, and crawfish for any accidental meal we could cram in between.”

For some reason Daniel Defoe didn’t have his character Crusoe eating sea crawfish, but Andrew Selkirk surely would have as part of his regular diet. According to one of his biographers, when he returned home to Scotland, “Day after day he spent in fishing…catching lobsters, his favourite amusement, as they reminded him of the crawfish of Juan Fernández.” 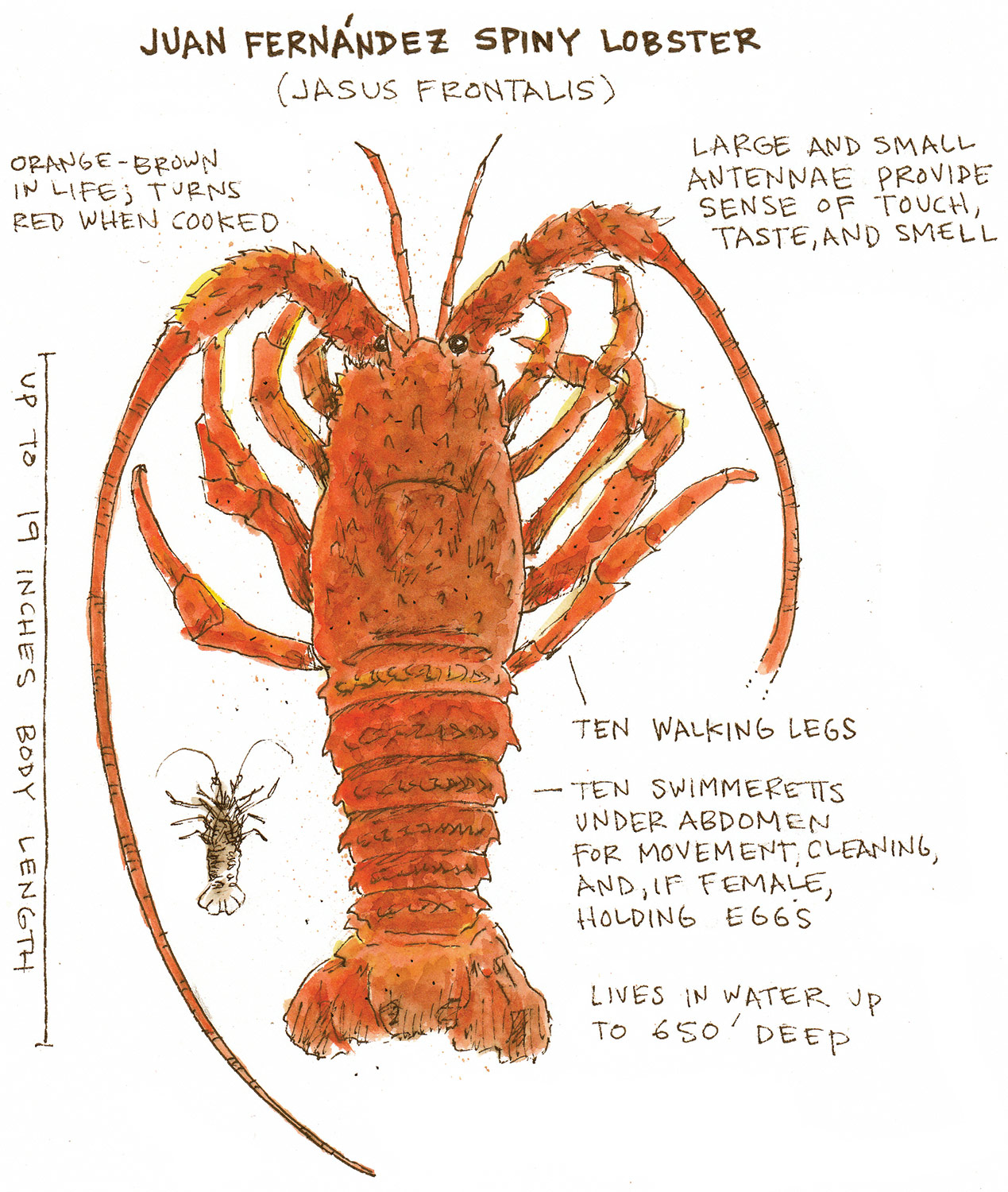