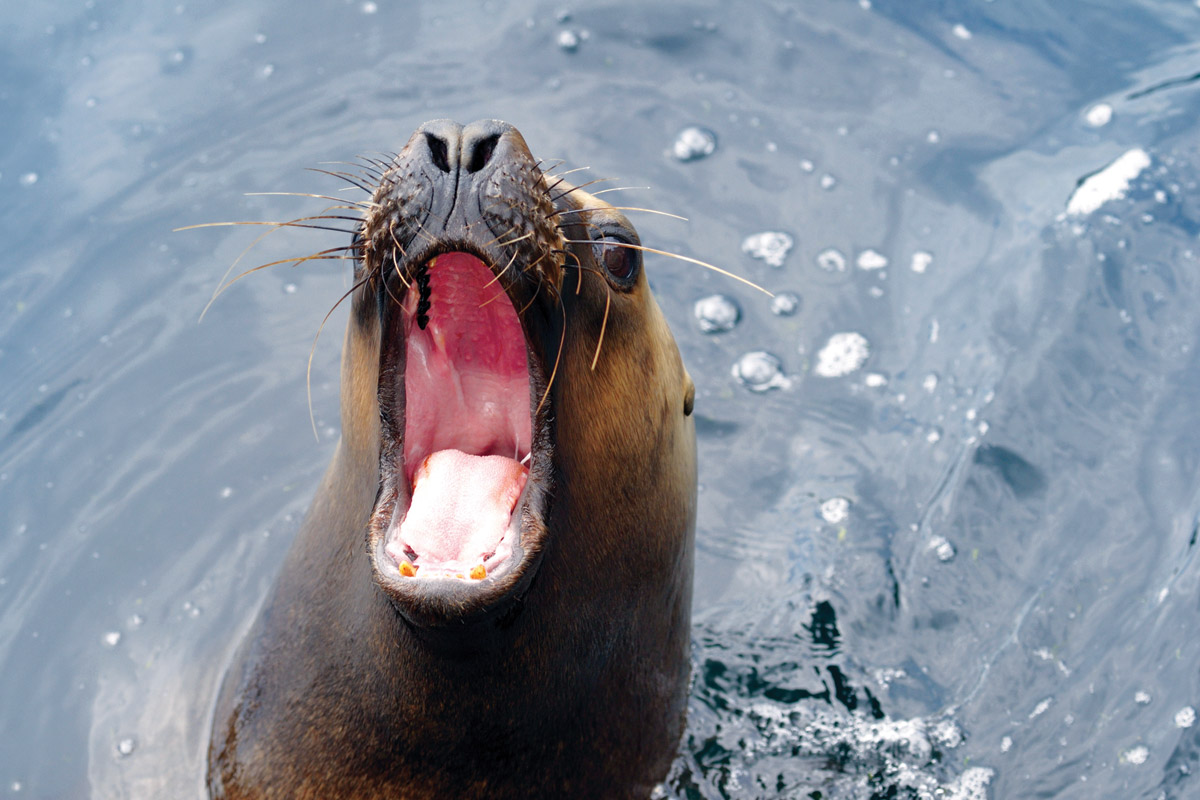 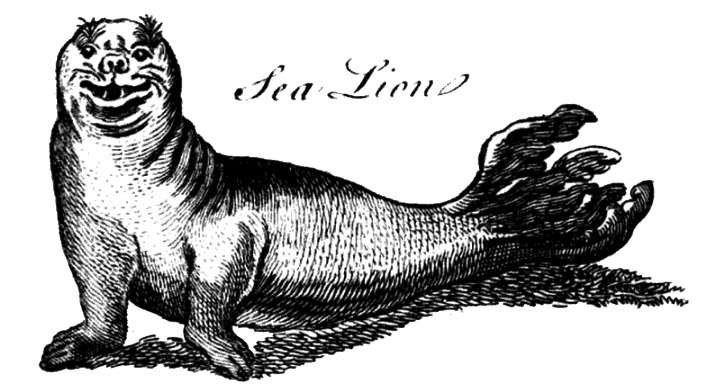 A “Sea Lion” from The Natural History of Quadrupedes (1766) by R. Brookes, who wrote “The noise they make is very loud and of different kinds, sometime grunting like Hogs and at other times snorting like Horses in full vigor.”

The Royal Navy ship Rattler was sailing southbound off the coast of Chile in late June 1794. At around eight o’clock at night, the men on watch heard something strange over the side. Rattler’s captain later described it: “An animal rose along-side the ship, and uttered such shrieks and tones of lamentation so like those produced by the female human voice, when expressing the deepest distress as to occasion no small degree of alarm among those who first heard it.”

Captain Colnett explained that the animal’s cries were the closest thing he’d ever heard to the human voice. It went on for three hours and “seemed to increase as the ship sailed from it.” Colnett believed that it was a female seal that lost her “cub.” Or maybe a seal pup had lost its mother. The crew, however, saw the wailing of the animal over the rail as an evil omen. The cries “awakened their superstitious apprehensions.”

So was this actually a mother seal or her pup? And why were the sailors so disturbed?

Colnett and his crew might have seen a South American Fur Seal, but perhaps the safest guess is that they heard the cries of the larger, more common, South American Sea Lion. Both species of marine mammals are found in this part of the world, feeding on fish and squid in the Peruvian Current and hauling out on islands to mate and give birth.

Dr. Claudio Campagna, who recently participated in a study of the vocalizations made by South American Sea Lions, told me: “It could have been a sea lion female. Sea lion females call their pups with sounds that may be described as a human female in distress.” 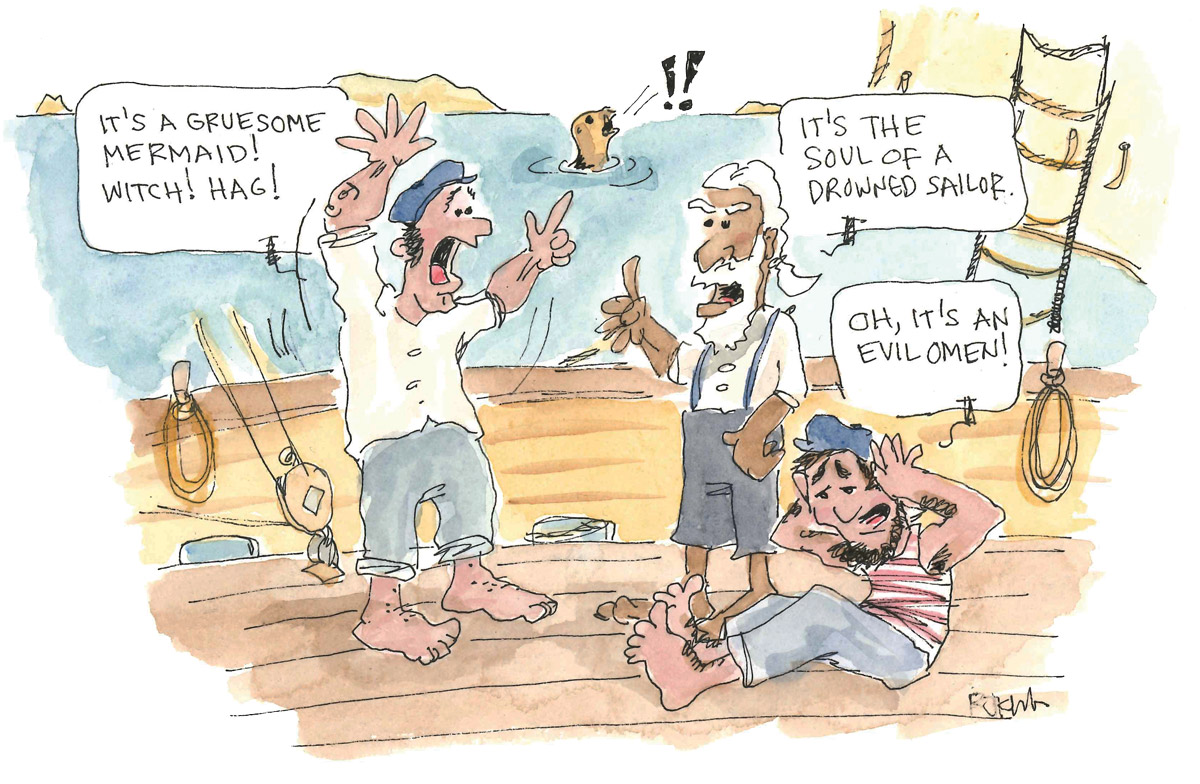 We’ll never know why this particular sea lion might have been crying out near Colnett’s ship for three hours, but seals and sea lions are known to be exceptionally vocal. They communicate both in the water and on shore. Males use their voices to intimidate other males and to attract mates. Mothers and pups use their voices to find each other in dense colonies. About a week after giving birth, mother South American Sea Lions leave their pups on the beach while they go to sea to find food. When the mothers return, sometimes days later, they must find their own among hundreds clumped together in the colony.

Although many of us today think of sea lions and seals as cute and cuddly, for centuries mariners felt the same as Colnett’s crew. It’s not hard to understand how early mariners imagined them as mermaids and sirens.

As late as 1845, Captain Washington Peck, who was sailing in the same part of the world, believed the South American Sea Lions to be “horrible” and “monsters” and “the compelling agents of some diabolical spell or inevitable doom.” Peck described them regularly swimming out to ships and said “their breathing is always like sobbing; their cries are wails.” 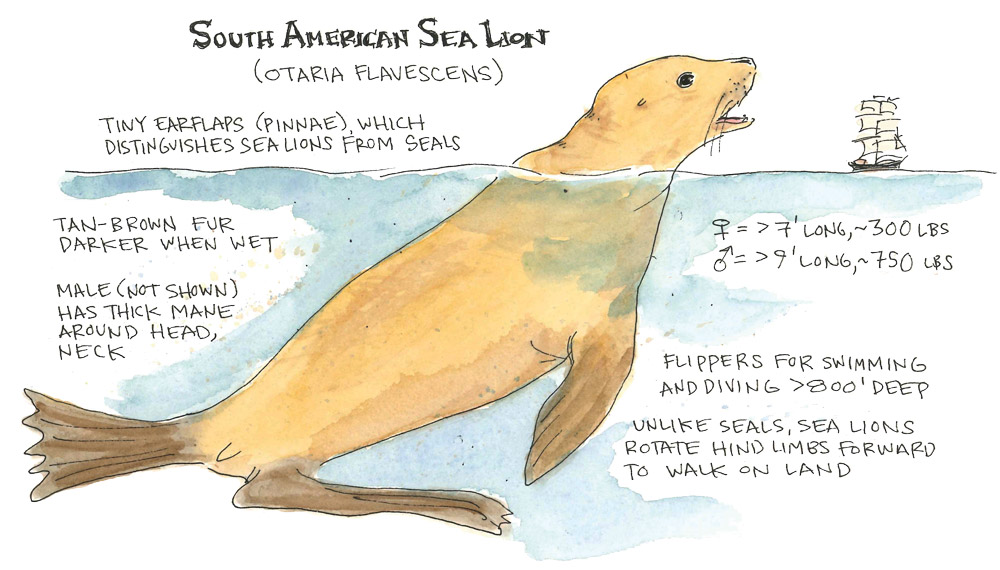 Herman Melville had read Colnett’s account before he wrote his classic novel Moby-Dick, published in 1851. Melville stole the story for his fiction. In Moby-Dick, the sailors aboard the Pequod sail past a clump of small rocky islands as they approach the equatorial Pacific to hunt for the White Whale. The men hear “wild and unearthly… wailings… crying and sobbing.” Some of the crew think the cries are from mermaids. The oldest sailor declares that the wails are the souls of drowned men. When Ahab clops up on deck with his peg leg, he, like Colnett, explains to his crew that the sound is just from seals. Ishmael says: “But this only the more affected some of them, because most mariners cherish a very superstitious feeling about seals, arising not only from their peculiar tones and semi-intelligent faces, seen peeringly uprising from the water alongside.” Then the sailors in Moby-Dick find their superstitious fears about the cries reinforced. Just a few hours later, one of their shipmates fell from aloft and drowned.

As for the Rattler, nothing terrible happened directly after they heard what was probably a female South American Sea Lion bellowing out to them for a full three hours, but about a week after rounding Cape Horn an enormous wave crashed over the back of the ship, filled it with water, smashed in some of the stern, and ruined the captain’s charts. By the time they made it to St. Helena in the South Atlantic, not only was the Rattler “almost a wreck,” but a couple of their men were ill from scurvy and still traumatized. “We had one man indeed who was [still] literally panic-struck by the appearance and cries of the seal in the Pacific Ocean,” Colnett wrote about their approach to St. Helena. “If we had remained twenty-four hours [more] at sea, he would not have recovered.”

You can view more “Animals in Sea History” at www.seahistory.org or educators.mysticseaport.org.