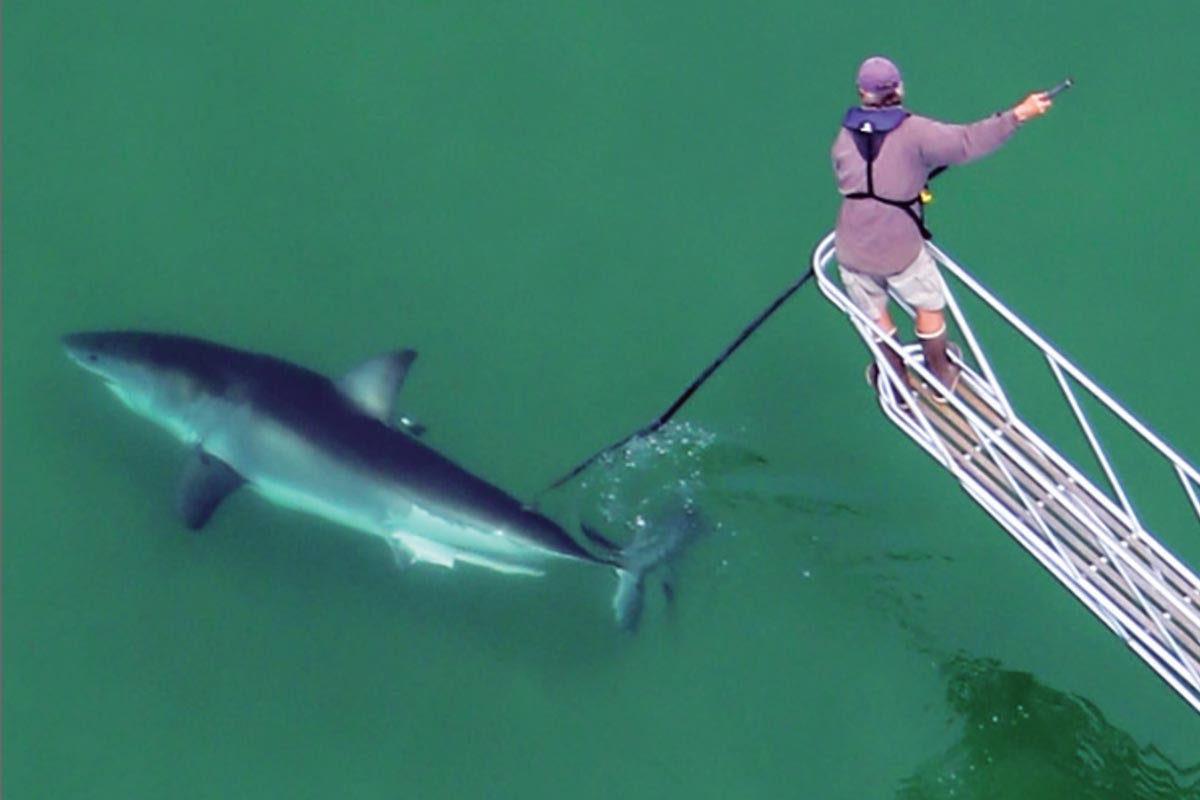 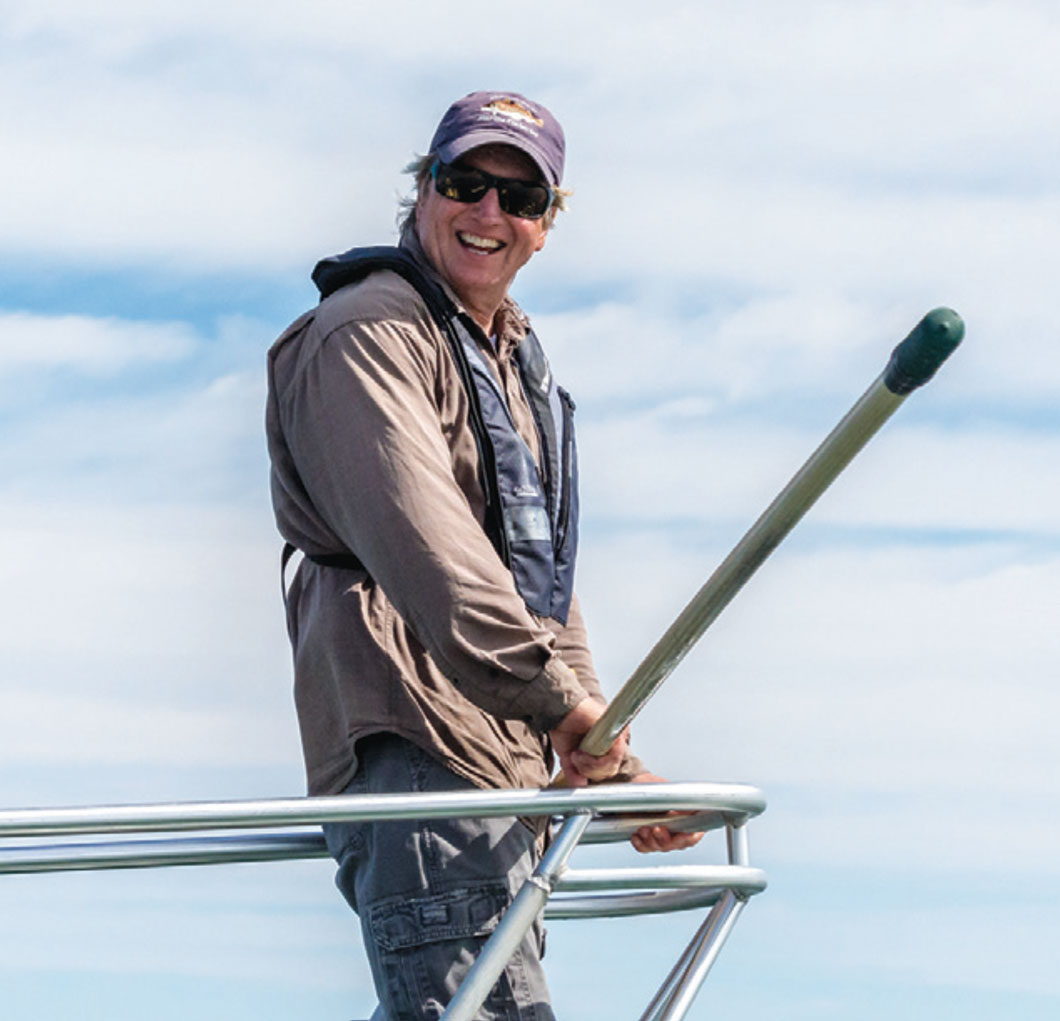 Greg Skomal observing the waters. (Photo: Christine Sanders) In the photo at the top of the page, perched over the water from a boat’s bow pulpit, Greg Skomal tags a white shark with a transmitter. (Photo: Wayne Davis, 2019)

Lots of people go fishing in the summer in the waters surrounding Cape Cod, usually for striped bass, bluefish, black sea bass, and the occasional tuna. Greg Skomal does his own sort of catch-and-release fishing, but he’s looking for great white sharks. Greg is a fisheries biologist for the state of Massachusetts, and his job is to conduct research that will inform decisions on how best to manage the marine resources in Massachusetts waters.

He specializes in white sharks, studying their movement ecology, natural history, and physiology in an effort to protect and conserve the species. In recent years, vacationers along the outer stretches of Cape Cod have become accustomed to beach closures due to great white shark sightings near shore, and some might be surprised to learn that the state is working to protect the species. But sharks play a crucial role in the ocean ecosystem. An apex predator, sharks help keep the population of other species in the food chain in proper balance.

Greg told us that he first fell in love with sharks when he was a kid watching television shows like the Undersea World of Jacques Cousteau and even scary movies like Jaws. While the movies have presented great whites as something to be afraid of, Greg has spent most of his life studying them and knows that they should be respected more than feared.

In college, Greg majored in biology, and in graduate school he studied shark biology. After ten years working in the field, he went back to school because he was going to need a PhD if he wanted to advance to the top of the field, teach at the college level, run his own research lab, and—importantly—qualify for research grants to fund his work. 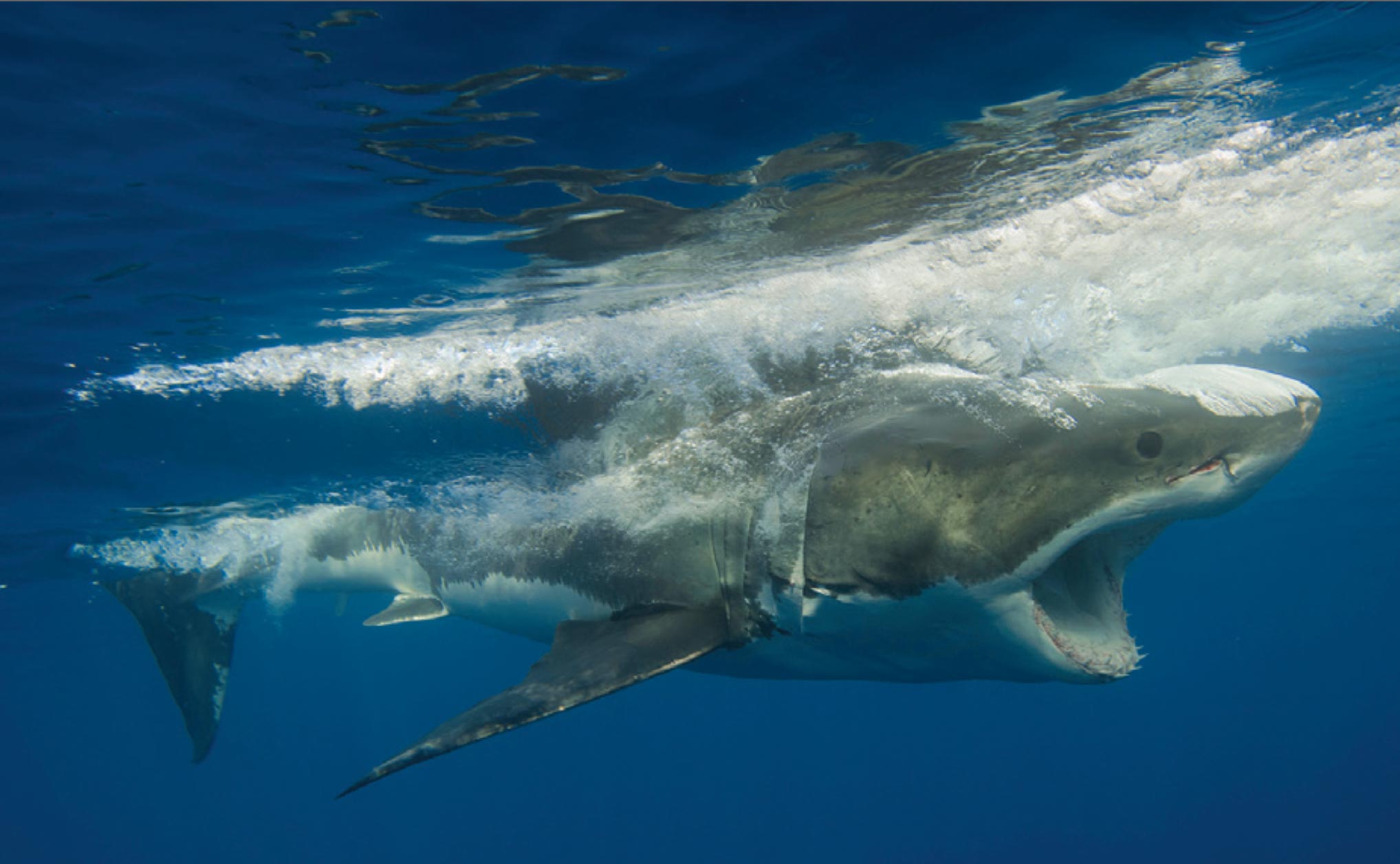 Great white sharks have a bad reputation when in reality they play a valuable role in the marine ecosystem. Photo taken by Greg Skomal.

In the summer months, Greg gets a lot of press in the local news; the growing great white shark population in Cape Cod waters generates a lot of interest. Search for his name on YouTube and you’ll see dozens of clips showing him perched out on the bow pulpit of a boat with a long pole tagging sharks with transmitting devices; sharks are migratory, preferring the New England coast in the summer and warmer waters in the winter. During the summer field season, Greg is out on the water 2 or 3 days per week. “A typical day involves locating, identifying (by videotaping), and tagging white sharks off the eastern shoreline of Cape Cod.” The other days he works in his office doing administrative work (budgeting, planning, and communicating with other scientists, and catching up on emails), preparing equipment, conducting outreach, and advising graduate students. During the winter he analyzes the data he and his team have collected, writes papers, applies for grants, makes public presentations, and takes care of general administrative tasks.

Exciting? To be sure! Does it turn into a regular old job? At times.

Are there jobs for future shark biologists? Indeed! Marine scientists are critical for understanding the health of the oceans, which, in turn, affects the environmental health of our planet. Within that specialty are marine biologists and, like Greg, fisheries and shark biologists. Most coastal states and the federal government employ marine biologists, as well as hundreds of private firms that study and work in the marine environment. It is a popular and growing field, but Greg warns that it is also highly competitive—a graduate degree is often helpful, if not required. Those pursuing this line of work also need to be good writers and communicators to compete for funding. He advises those interested in marine science to explore volunteer opportunities as a way to get your foot in the door. “I volunteered for one of my professors in his lab and, even though he did not study sharks specifically, I gained both valuable experience and a solid recommendation letter when I left.” He also volunteered at a lab that studied sharks and that ended up leading to a full-time paid position.

You can learn more about shark biology online through the Massachusetts Division of Marine Fisheries website at www.mass.gov, the US Fish & Wildlife Service at www.fws.gov, NOAA Fisheries at www.fisheries.noaa.gov, and through dozens of private organizations.

Greg works a lot with the Atlantic White Shark Conservancy (www.atlanticwhiteshark.org). You can also find posts by or about Greg Skomal on most social media outlets.