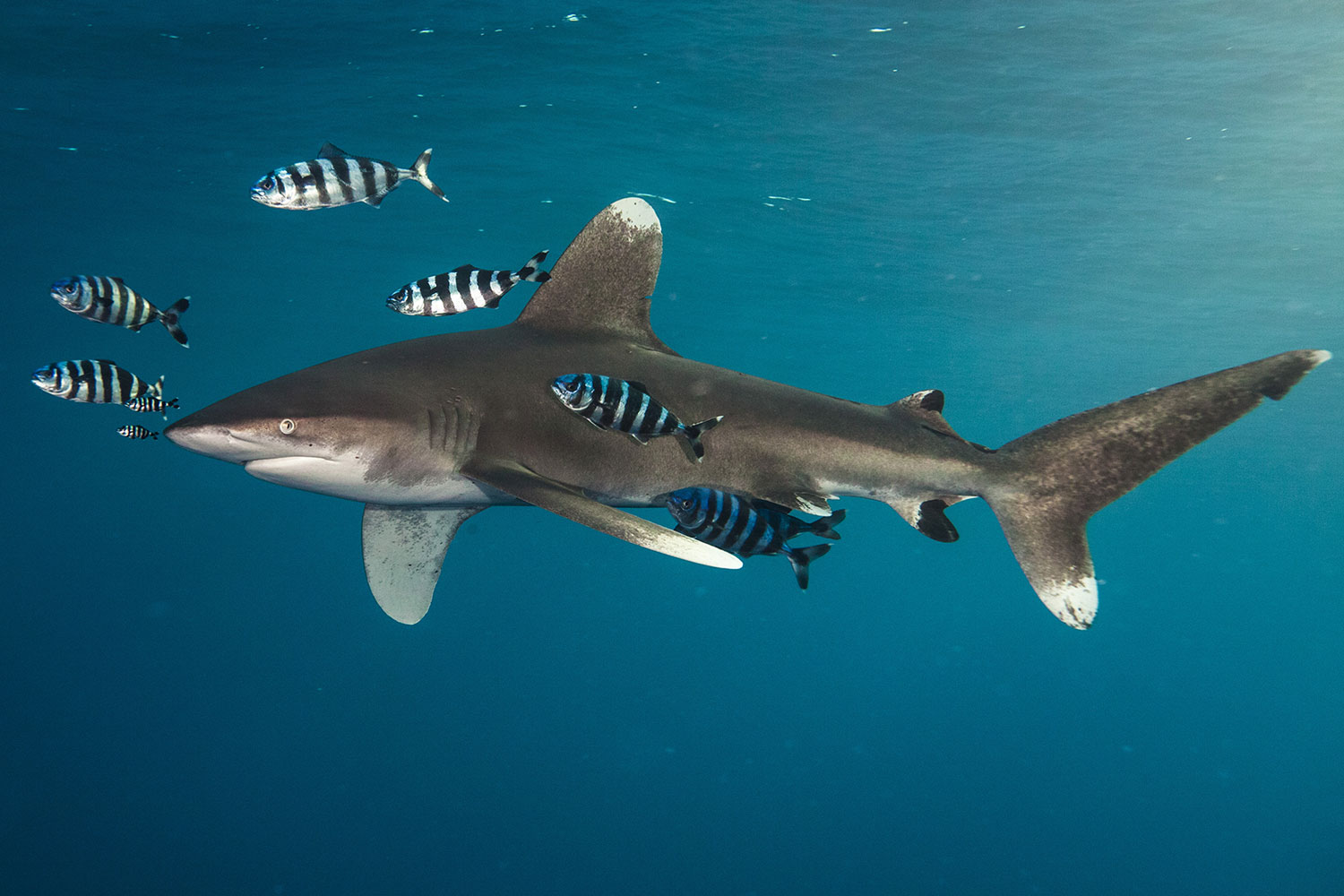 Scientific Name:
Carcharhinus longimanus
Whitetips follow schools of tuna or squid, and trail groups of cetaceans such as dolphins and pilot whales, scavenging their prey. 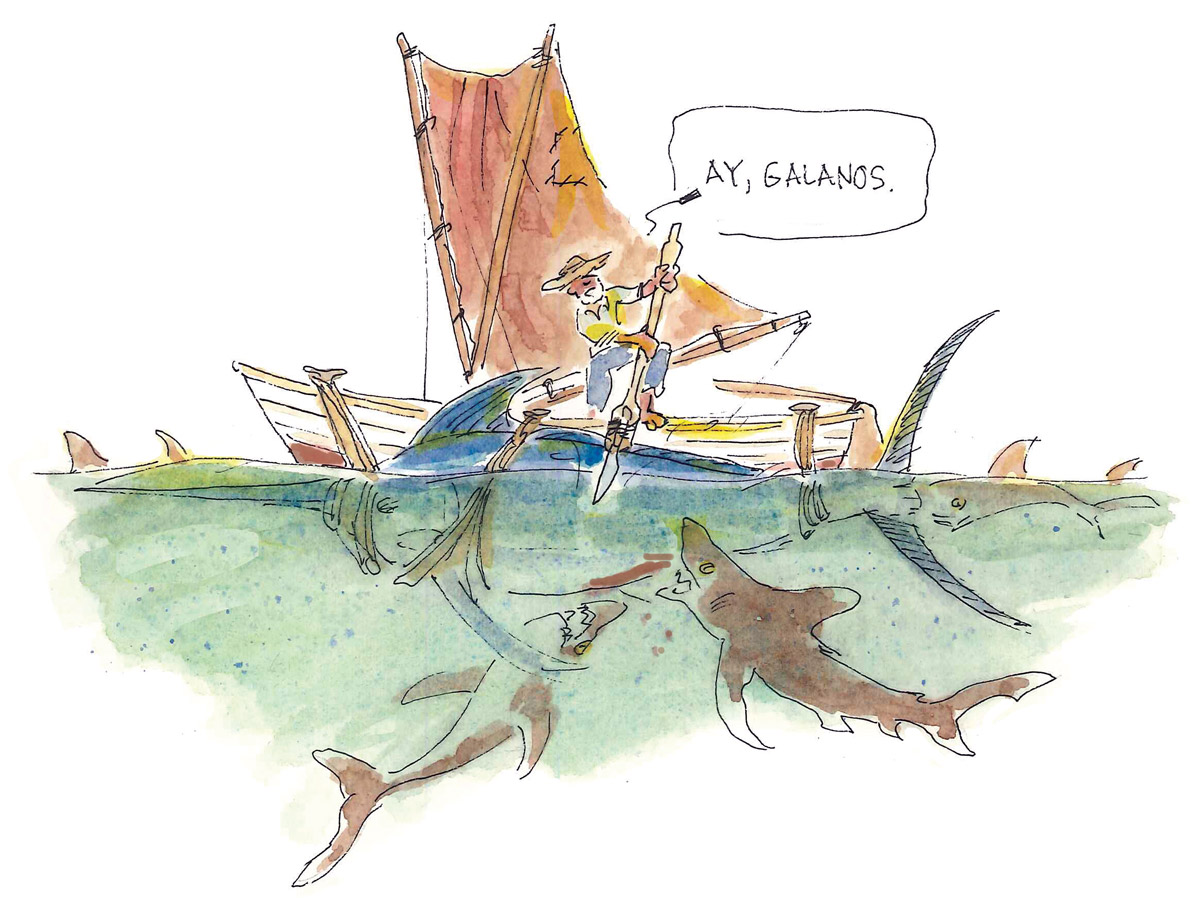 In Ernest Hemingway’s 1952 novella The Old Man and the Sea, a fisherman named Santiago captures a marlin that is 18 feet long. Santiago had battled the fish for three days. It’s too large to fit inside his boat, so he lashes his catch up against the hull as he begins to sail back home to Havana. Tragically, he does not enjoy his success for long. Sharks smell the blood of the marlin; they attack the fish, tearing off chunks and spreading still more blood into the water.

Hemingway writes about two different types of sharks. Understanding them is significant to understanding the story, as well as the natural history of the Gulf Stream in this part of the world, because in The Old Man and the Sea Hemingway wrote carefully and knowledgeably about ocean life. Hemingway is well known as a deep-sea fisherman who set several records for the prize fish he landed. Few people recognize that the author was also a thoughtful amateur marine biologist. He even chartered his boat Pilar for scientific study.

In the novel, Santiago calls the first shark to hit the marlin a dentuso, which means “teeth” in Spanish and refers to a mako shark. The teeth within the mako’s replaceable rows are less like the more triangular teeth of other sharks. Hemingway writes that those of the mako are “nearly as long as the fingers of the old man and they had razor-sharp cutting edges on both sides.” Makos hunt marlin and tuna, the fastest fish in the ocean. They have evolved a similar body shape and coloration. “Everything about him was beautiful except his jaws,” Hemingway writes of the mako. The shark bites off a huge chunk of the prize marlin, but Santiago manages to kill it with a harpoon.

But as the old man continues on toward Havana, another species of shark appears. 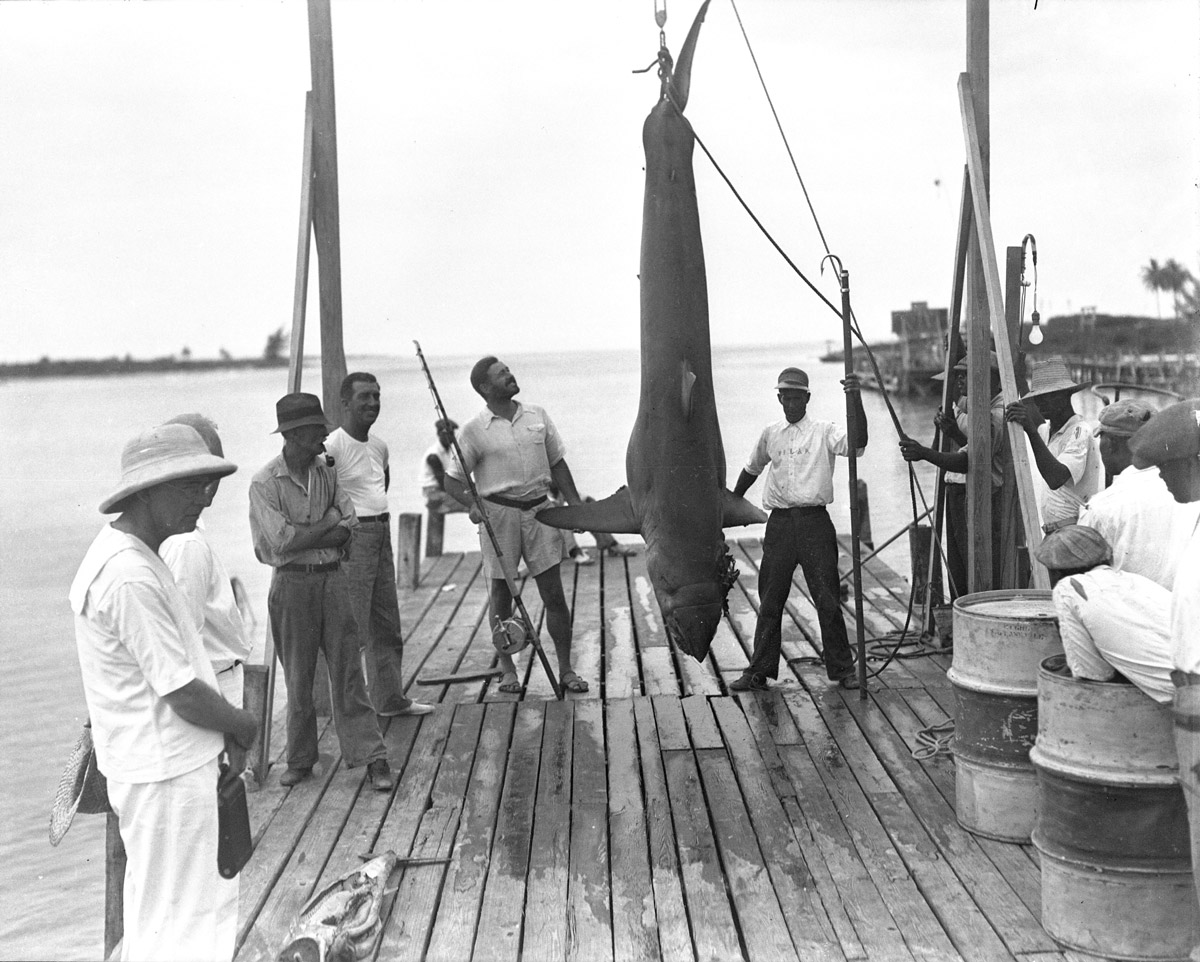 According to Hemingway expert Susan Beegel, who has written a guide to the marine life in the novel, Hemingway and native Cubans at the time knew galanos as a general type of shark rather than a given species. As Santiago describes, they  have shovel-shaped heads, brown skin, white tipped pectoral fins, and tails with especially larger upper lobes. The deep-water location, behavior, and appearance of this particular galano as depicted in the story fits best for the oceanic whitetip shark.

Santiago respects almost all the creatures of the ocean, but he hates these galanos—and not just for eating his catch. The dentuso approaches the marlin alone and directly with great speed; the galanos swim underneath and attack the catch as a gang from the bottom. The old man sees the galanos as evil and cowardly. “They were hateful sharks, bad smelling, scavengers as well as killers, and when they were hungry they would bite an oar or the rudder of a boat.”

Hemingway continues: “It was these sharks that would cut the turtles’ legs and flippers off when the turtles were asleep on the surface, and they would hit a man in the water if they were hungry, even if the man had no smell of fish blood nor of fish slime on him.” Biologists and sailors have confirmed these behaviors in the oceanic whitetip shark.

At the end of The Old Man and the Sea, Santiago limps into the harbor with only the ravaged skeleton of the marlin. The meat has been chomped off and torn apart by the sharks, seeming to render useless the old man’s heroic efforts.

After the old man stumbles up to his shack to recover, tourists at a restaurant ask about the big skeleton in the surf.

The tourist misunderstands. She and her companion think the skeleton was that of a shark, not the cause of the carcass. In The Old Man and the Sea, Hemingway takes us out on the Gulf Stream with Santiago so we can know more than the tourist.