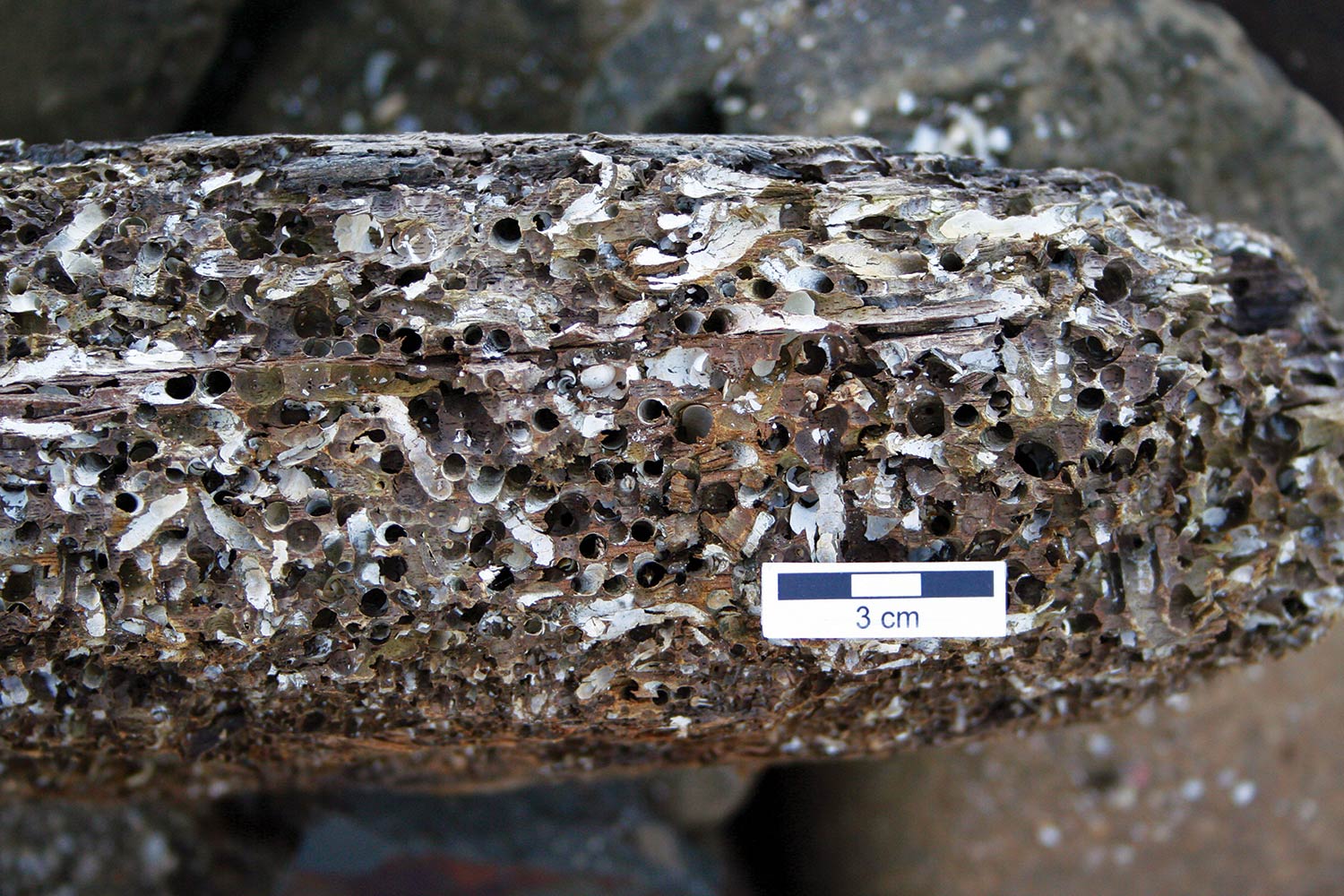 Scientific Name:
Teredo spp.
Two encircling shells grind into the wood. Damage to wood by the teredo worm was often extensive enough to sink a ship. 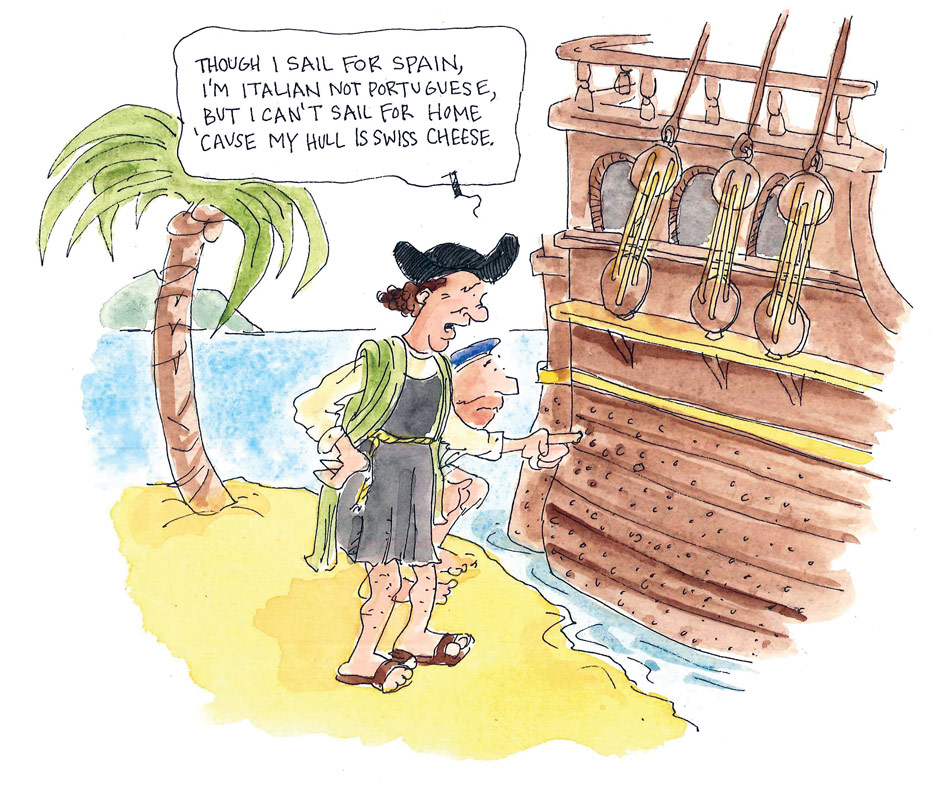 More than 500 years ago, Christopher Columbus was trying to get his crew and small fleet back to Spain as he completed his fourth and final trip to the West Indies. Yet he was unable to start sailing his ships home across the Atlantic because his small fleet was sinking. They tried to limp along, but his remaining two caravels were “riddled with holes as a honeycomb.” Christopher Columbus wrote about trying to sail to Jamaica: “With three pumps, pots and cauldrons and all hands at work, I still could not keep down the water that entered the ship, and there was nothing we could do to meet the damage done by the shipworm.” With the decks nearly awash, his two ships La Capitana and Santiago de Palos barely floated into what is now called St. Ann’s Bay.

The wood in Columbus’s ship was not filled with worms exactly, but, instead, with a type of clam with a thin soft body. Many of these bivalve clams live all around the world. One of the most common in the North Atlantic that infest wooden ships, pilings, docks, and dikes has the scientific name Teredo navalis. This comes from the Greek for “wood worm” and from the Latin for “of ships.” The shipworm species that ate up Columbus’s fleet was almost certainly a different, more tropical species—very similar, but even bigger!

As a tiny larva floating in the ocean, the shipworm lands on a hull or piling and immediately begins to bore into the surface of the wood with two rasp-like shells. The clam gets all the nutrients it needs from the wood and expels its waste with a little tail-like siphon. With a shell plate, it can close the “back door” if disturbed or if environmental conditions are poor. Shipworms are able to live for weeks without air or water. The clams tunnel parallel to each other somehow, so in the hulls of Columbus’s ships they could sense each other’s path, never crossing, thus slowly eating away the planks from the inside. 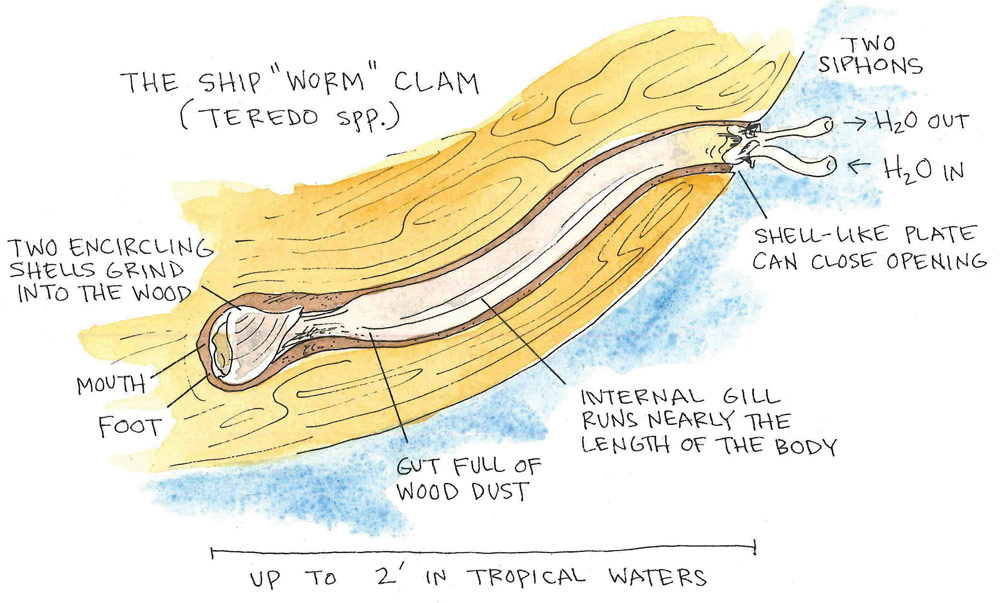 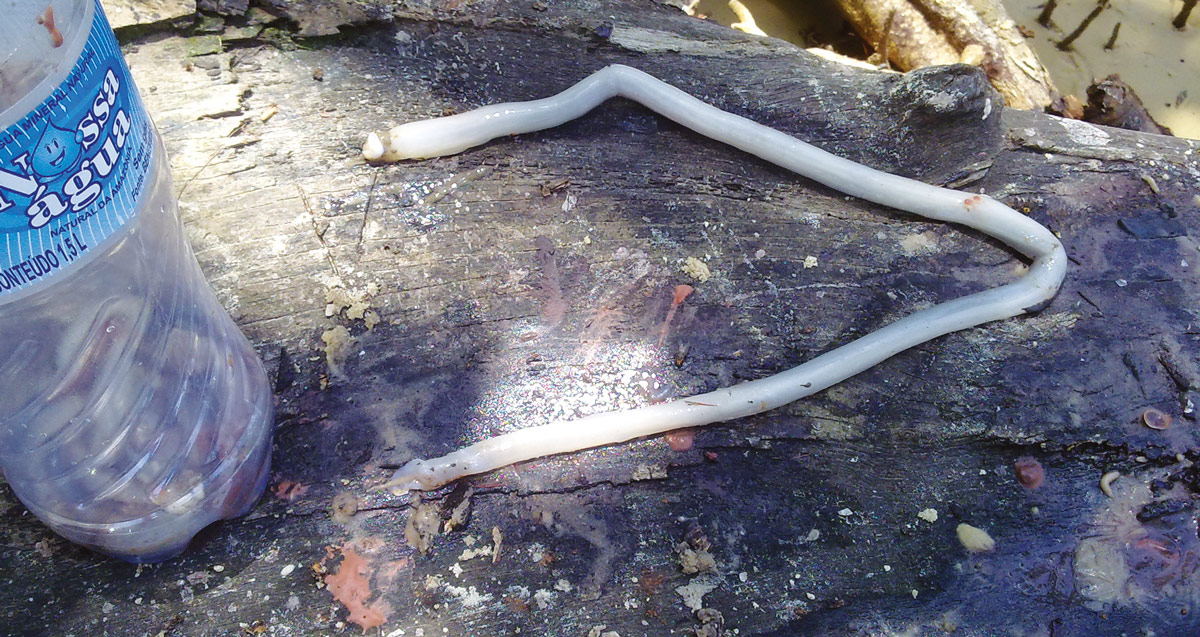 A shipworm extracted from the wood of a mangrove at the mouth of the Amazon in Brazil. (Water bottle used for scale.)

As early as 350 B.C.E., Theophrastus wrote about shipworms compromising the vessels of Ancient Greece, and the clams have since plagued mariners’ ships until the 20th-century invention of steel and fiberglass hulls. Early mariners well before Columbus used coatings such as wax or tar on ship bottoms. Columbus had tried these strategies, too. Early navigators also tried to spend time in fresh water harbors or rivers to try to kill the clams. It seems Columbus tried this also! Later ship owners turned to copper sheathing and toxic bottom paints with copper and other chemicals that would be poisonous to shipworms and other organisms that bore or damage ship bottoms. Historians explain that the copper sheathing used on English ships made the difference in a major battle in 1780 against the Spanish navy, whose vessels were weakened and already sinking from shipworm holes. Shipbuilders of large wooden vessels also took to fastening a “worm shoe,” a layer of sacrificial wood beneath the keel. Today, if wooden pilings and docks are not regularly covered with deterrent chemicals, shipworms remain a problem. This is often an unexpected drawback when people are working to improve the water quality in harbors and waterways.

Back in 1503, with his ships irreparable from shipworm damage and some of his skilled sailors dead from earlier skirmishes with native peoples, Columbus and his 100-plus men remained shipwrecked on the coast of Jamaica for more than a year. They survived their own mutiny, lack of food, and conflicts with Taino native peoples. Finally, in June of 1504, two Spanish ships from Hispaniola arrived on the coast to rescue them. Columbus navigated the vessels back home to Spain, this time to stay for good and spend his time retired from the sea, spinning yarns about the aggressive Caribbean worms (although he believed them to be Asian worms, since he thought he was in Chinese waters.)

In the next issue: Fish that sunk ships?