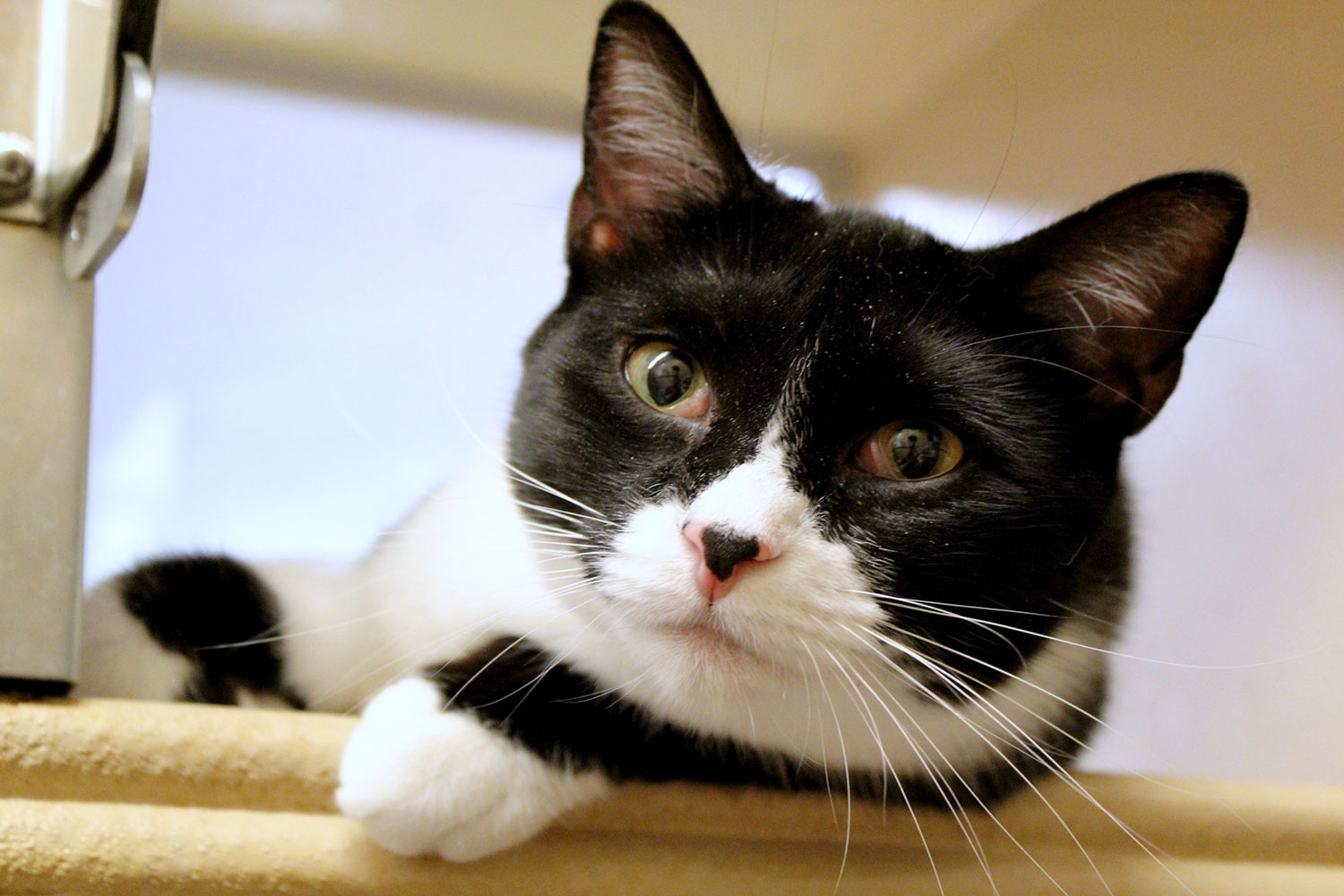 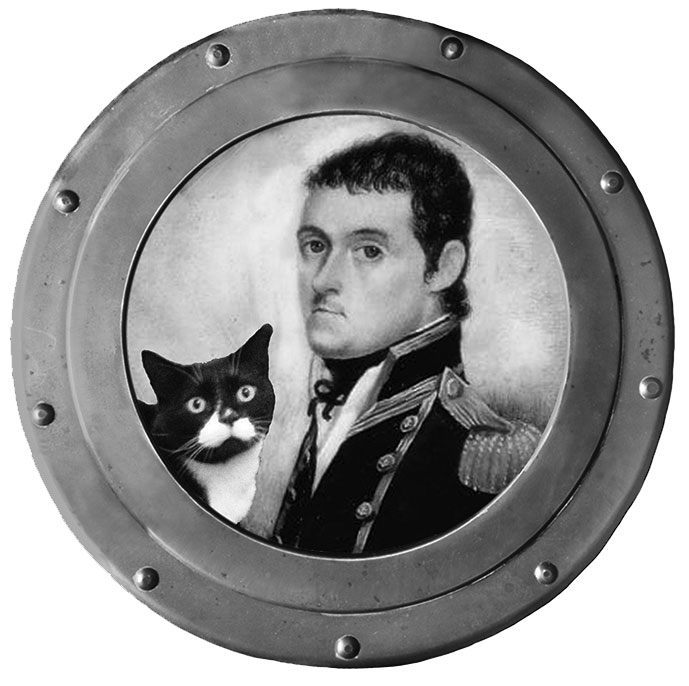 1803 was a momentous year for Matthew Flinders and his cat, Trim. In June they completed the circumnavigation of Australia aboard HMS Investigator. In August, sailing back to England on board HMS Porpoise, they were shipwrecked on a coral bank in the Great Barrier Reef. Rescued two months later, they booked passage home aboard another ship, but when they put into Port Louis, Mauritius, in December for vital repairs, they were taken prisoner. Mauritius was under French control during this period, and England had just declared war against France earlier that year.

When Trim went missing a few months later, Flinders was devastated. As a midshipman, he had picked this tuxedo kitten out of a litter born on board HMS Reliance and sailed with him ever since. In his Biographical Tribute to the Memory of Trim (1809), he describes Trim as a favorite among all the crew, who took endless pleasure whirling a musket ball slung with a piece of twine round upon the deck for him to chase, and teaching him to leap over hands. 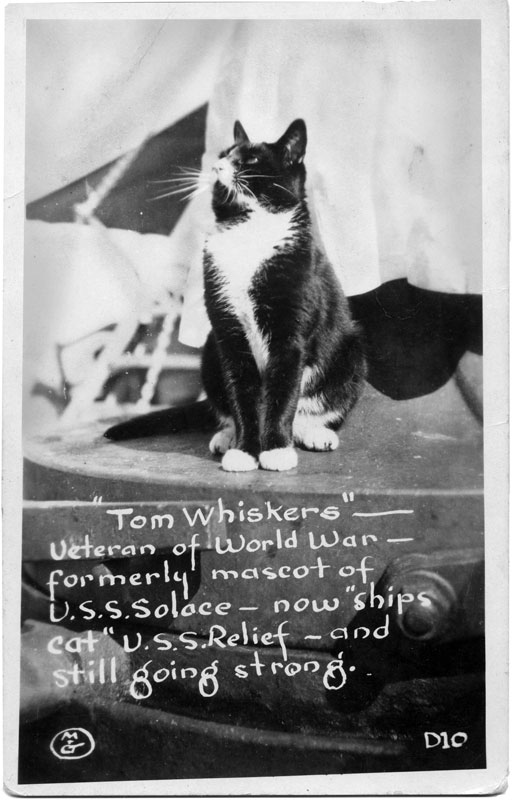 While not a renowned water lover, the domestic cat (Felis catus) took to life on the ocean waves thanks to a natural agility and balance and having plenty of things to climb. Flinders tells us that what most attracted Trim’s attention were “the replacing a top-mast carried away, or taking a reef in the sails….As soon as the officer had issued the word ‘Away up aloft!’ Up he jumped along with the seamen, and so active and zealous was he, that none could reach the top before, or so soon as he did.”

Going aloft on four legs is a breeze; coming down is not. It’s the claws that are the problem. Highly useful to shimmy up trees, trellises, and trouser legs, cats’ claws curve towards the back rather like built-in crampons. Coming down, it’s hard to get a grip, as claws point the wrong way. But, if the cat falls, there’s a good chance it will land on its feet.

Eons of evolutionary history have enabled cats to turn right side up mid-air and stick a four-paw landing. This is because their vestibular system in the inner ear is like having a built-in gyroscope. It tells a cat which way is up, no matter what position it was in when it started falling. A cat can fully turn over in its own standing height within a quarter to half a second, says Dr. Donald McDonald, who photographed falling cats with a high-speed camera at 1,500 frames per second.

Cats have been welcome aboard ships for hundreds of years, as they proved to be indispensable pest controllers, protecting provisions and cargo from rats, those omnivorous eating machines that will devour everything from food rations to non-food necessities, such as ropes, sails, and even the calloused skin on the soles of sleeping sailors’ feet. 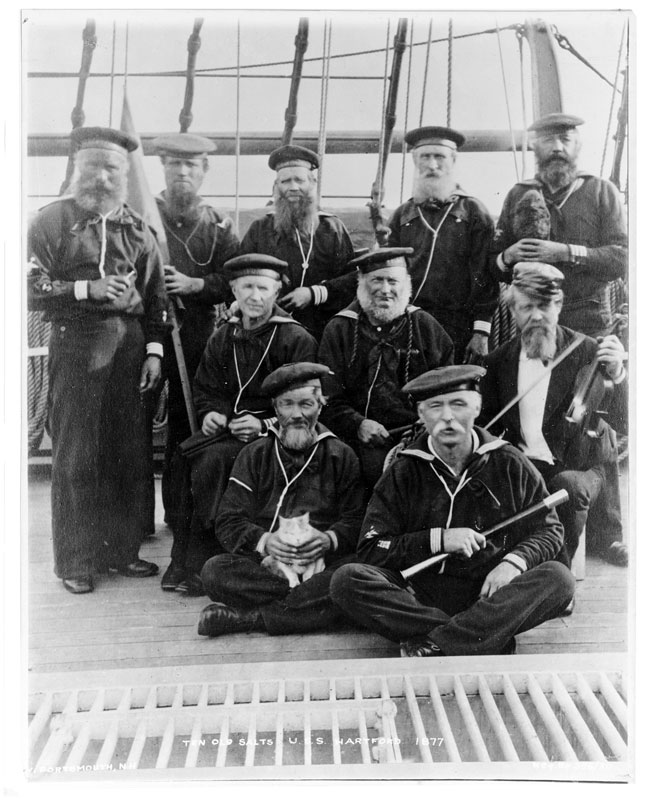 “Ten Old Salts” and their feline shipmate onboard USS Hartford*—1876.

At one time, simply having a cat on board provided the master with insurance. The shipping rules (II Consolato del Mare) published in Barcelona in 1494 state: “If goods laden on board of a ship are devoured by rats, and the owners consequently suffer considerable damage, the master must repair the injury sustained by the owners, for he is considered in fault. But if the master kept cats on board, he is excused from that liability.”

Some 500 years later, ridding a ship of its rat population even led to a bravery award for one cat. Simon, of the British warship HMS Amethyst, won the PDSA (People’s Dispensary for Sick Animals) Dicken Medal for his courage during the Yangtse Incident, when the ship was held hostage for ten weeks in 1949 during the civil war between the Chinese Communist People’s Liberation Army and Nationalist Kuomintang forces. Nominating Simon, Amethyst’s Lieutenant Commander John Kerans wrote:

There were a large number of rats on board that began to breed rapidly in the damaged portions of the ship. They represented a real menace to the health of the ship’s company. Simon nobly rose to the occasion and after two months the rats were much diminished. Throughout the Incident Simon’s behaviour was of the highest order. One would not have expected him to have survived a shell making a hole over a foot in diameter in a steel plate, yet after a few days Simon was as friendly as ever. His presence on the ship, together with Peggy the dog, was a decided factor in maintaining the high level of morale of the ship’s company. They gave the ship an air of domesticity and normality in a situation which in other aspects was very trying. 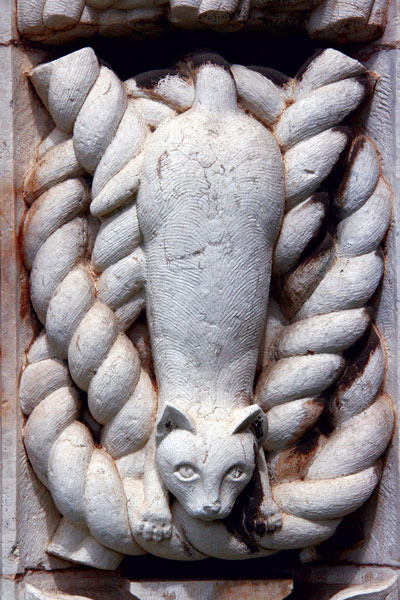 Possibly the first image we have of a ship’s cat is this watchful feline, stretched out on a square knot carved on the column of the 16th-century Jerónimos Monastery in Portugal.

Ships’ cats weren’t just pest controllers, they were beloved pets. The cat Nansen was “the only speck of sentimental life within reach,” said Dr. Frederick Cook, describing the long, dark months on board RV Belgica, which was trapped in the ice when the 1897–99 Belgian Antarctic Expedition was forced to spend the winter in the Antarctic.

“If Maizie hadn’t been with us, we might have gone nuts,” said Eugene Clancy of his crew’s feline companion, who was rescued with five other crew members after fifty-six hours in a life raft in 1943 during the Battle of the Atlantic.

Sailors were often so attached to their cats that they would stop their ship in the open ocean and rescue them if they fell overboard—not an easy thing to do for a sailing ship. When the Joseph Conrad’s ginger tomcat, Joseph, fell in the water from the mizzen channels, Alan Villiers sent two men to the rescue in a rowboat. “Joseph was a good cat; we could not leave him to drown,” he said. “The boys hauled him aboard and hurried back to the ship, taking off their jerseys in the cold to wrap round the cat… He soon recovered from his cold immersion and within two days was happily playing in the rigging again, though he kept away from the channels.” 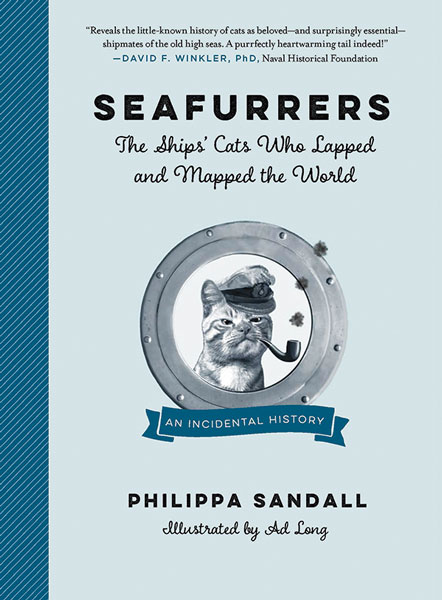 Philippa Sandall is the author of Seafurrers, The Ships’ Cats Who Lapped and Mapped the World (The Experiment Publishing), and, with Dr. Gillian Dooley and Matthew Flinders, RN, Trim, The Cartographer’s Cat (Bloomsbury Publishing).

Whether for furry companionship or to control pests, cats continue to serve as beloved crew members. Do you know a cat who lives on a boat? We’d love to hear about it! Send us a photo of the seafaring cat, and we might print it in the Letters section of the next issue of Sea History. 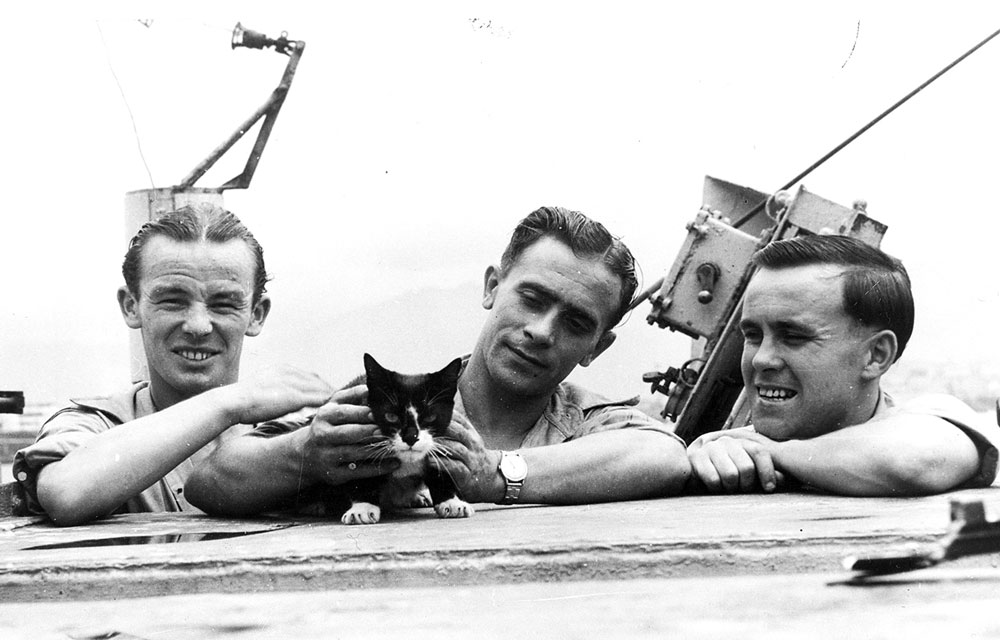