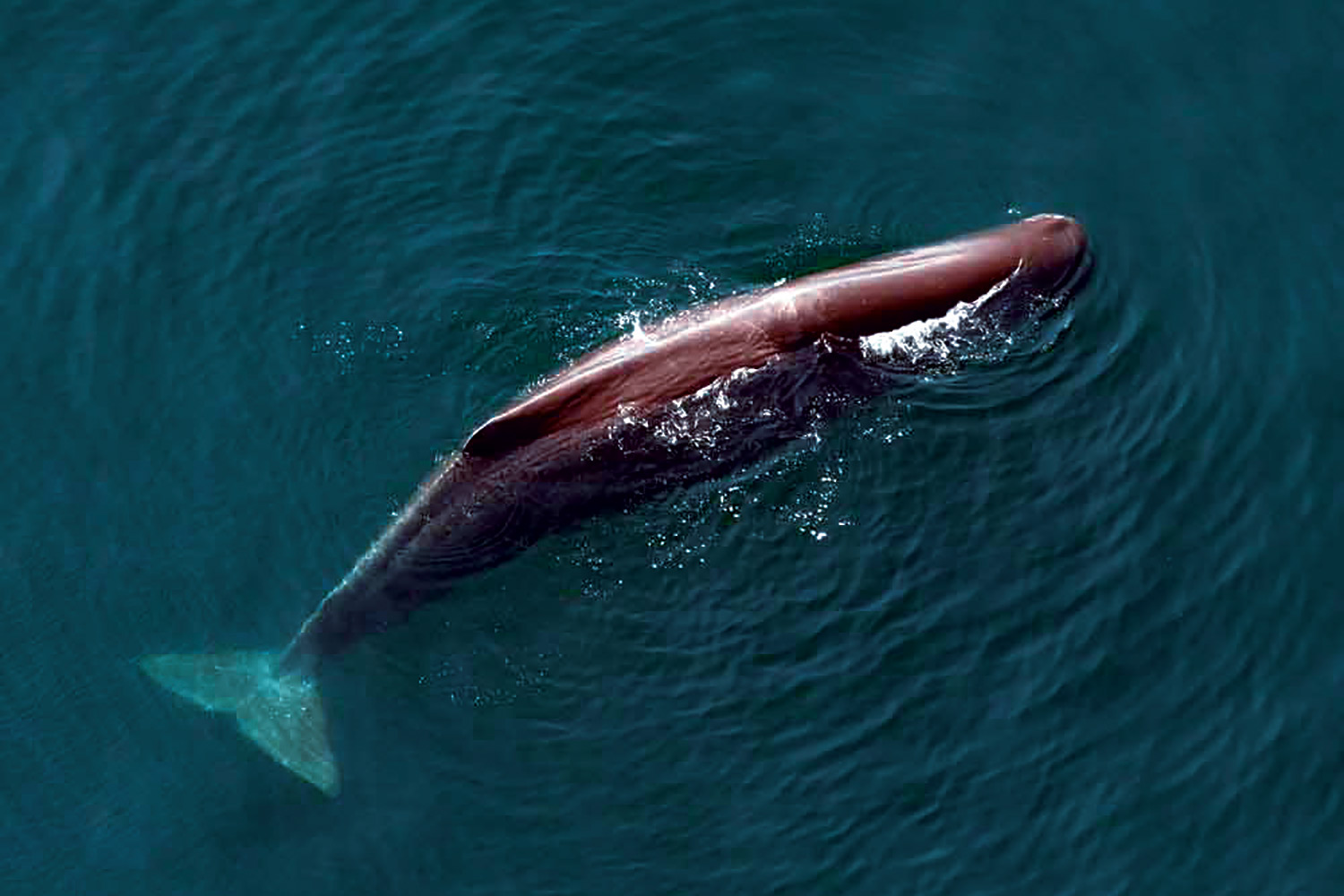 Scientific Name:
Physeter Macrocephalus
Lifespan:
60 – 70 years
Male sperm whales can grow up to at least 60 feet, with their heads taking up about a third of their overall length. Sperm whales can dive deeper than any other whale, over 3000 feet (1000 meters)

This August 1st marks the 200th birthday of Herman Melville, author of one of the most famous novels ever written in the English language. Moby-Dick’s dramatic ending pits the great white whale against the maniacal Captain Ahab, and things don’t end well for Ahab, his ship, or his crew. The sinking of Ahab’s ship by a whale has been reproduced in cartoons, comics, fan fiction, and multiple feature films. But did that ever happen? Could that happen? Has a sperm whale actually sunk an entire ship?

“This sketch shows the ship at the moment of attack…” Drawing by Thomas Nickerson, who was at the helm when his ship Essex was rammed by a sperm whale in 1820. Provided by Nantucket Historical Association.

You may have already heard of the 1820 story of the whaleship Essex, the first and only well-known account of a sperm whale ramming and sinking a full ship, an event that Melville used for his fictional masterpiece. Essex’s first mate, Owen Chase, wrote that after the enormous bull sperm whale rammed the ship with its head, the animal turned and came back again directly at the ship. “The surf flew in all directions about him,” Chase wrote. “His head was about half out of water, and in that way he came upon, and again struck the ship.” On this second strike, the whale bashed a large enough hole in the hull to sink the Essex within hours.

Melville also wrote in Moby-Dick of the whaleship Union, which sank in the Atlantic in 1807 after accidentally running into a whale at night. He does not mention in the novel, however, three other events about which he almost certainly had not learned: in 1849 off the coast of Nicaragua, a ship named the Frederic sank after a collision with a whale; in 1850, in the midst of being hunted, a sperm whale rammed a hole in the hull of the whaleship Pocahontas, forcing the ship to run to safety into Rio de Janeiro; and, the same year, the whaleship Parker Cook was hit twice by an enraged whale, yet managed to float to safety. 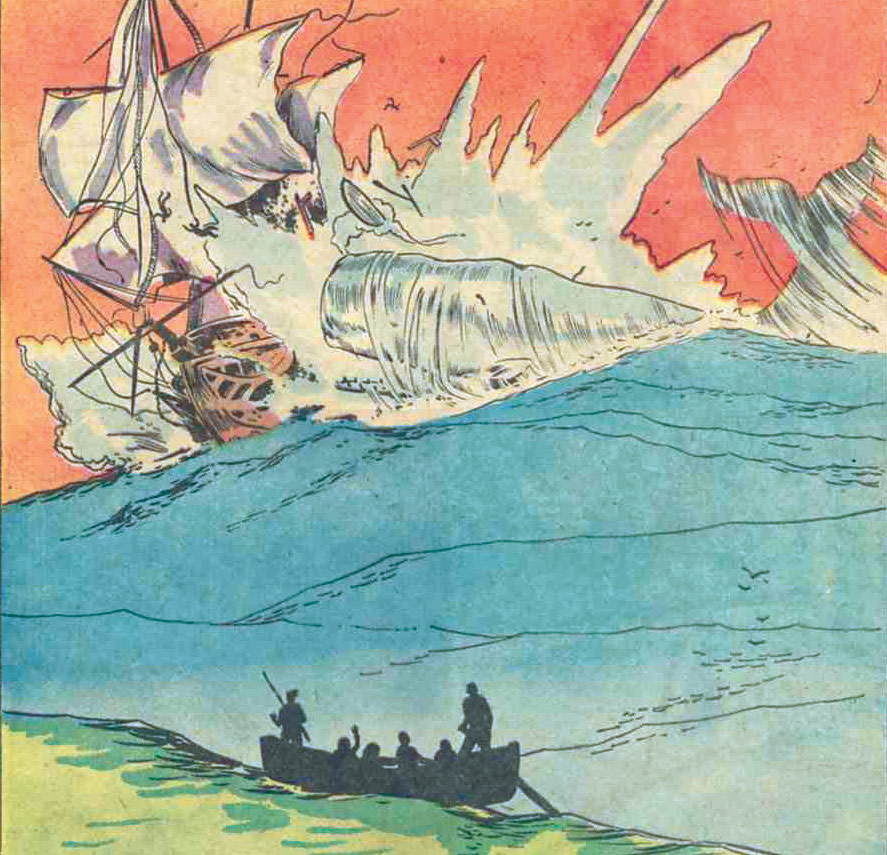 Detail of an illustration from Moby-Dick. Classics Illustration, 1943.

Then, shortly after the publication of Moby-Dick, Melville was thrilled to learn that a whaleship named the Ann Alexander had also been sunk by a sperm whale. Another ship later captured the same animal, identified with two of the Ann Alexander’s harpoons—along with shards of wood still stuck in its head.

Historians have since found still more examples of whales ramming holes in wooden hulls of ships and fishing boats and even a couple modern accounts where sperm whales bumped into steel boats. So, yes, sperm whales did occasionally ram ships, and even sink them on occasion. Which brings us to: Why would they? Hitting a ship a second time, as in the case of the Essex and the Parker Cook, certainly suggests an animal is doing so on purpose. 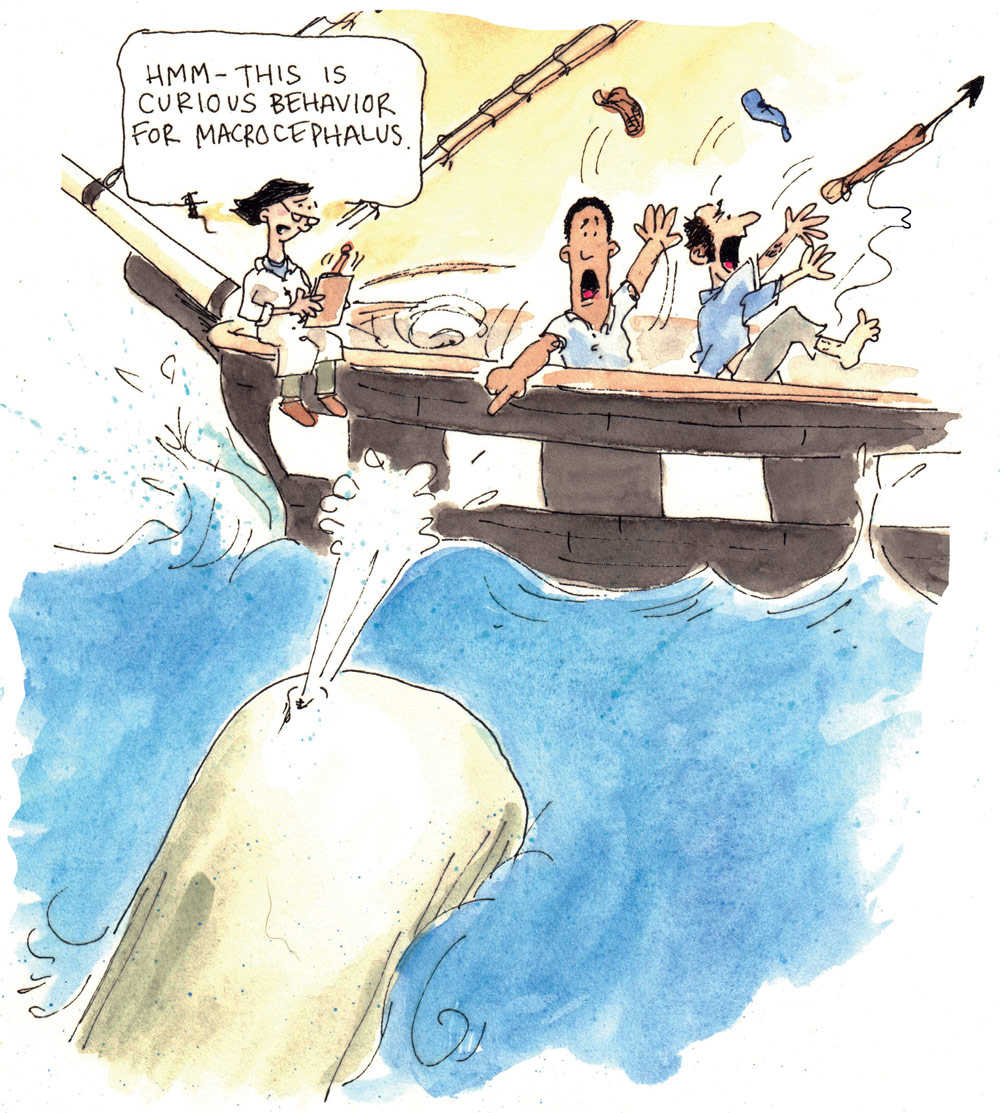 The first and most believable answer is that the whales were reacting to an attack in pain or in defense. Historians have dozens, if not hundreds, of examples of sperm whales crushing small whaleboats by using their heads, tails, and jaws after being harpooned (see “Do Sperm Whales Bite?” in Sea History 162). Many whale species, including humpbacks, bottlenose dolphins, and killer whales, use their heads aggressively, either against other species or in male-to-male competition. Yet sperm whales have not been observed doing this. Biologists think that male sperm whales are far more likely to settle disputes with their loud clicks and clangs of echolocation. In Melville’s day, naturalists thought that individual large bulls served as the “guardians” of schools of sperm whale families, but we have learned since that is highly unlikely. Modern observers report that male sperm whales spend only very short times within groups of females and juveniles. Most biologists and whale watch operators today report that sperm whales are exceptionally passive—even skittish, as if they didn’t know their own might as the largest toothed predators on Earth.

Recently, scientists have been studying to determine if sperm whale heads have evolved for ramming behavior, especially for male-to-male competition. The sperm whale’s enormous rectangular head is larger by proportion in males than in females. The males’ skin is also thicker and tougher at the front, and they have fused neck vertebrae that might brace the whale and protect it against a head injury. A recent study from 2016 that consulted with a bioengineer in Japan found that, just as Ishmael claimed in the chapter “The Battering Ram,” the oily fluid structures within the head—the spermaceti and, especially the junk with its partitions—may serve as a shock absorber against ramming impact.

Sailors and naturalists in Herman Melville’s time were actually somewhat mixed in their opinions and experience as to how timid and peaceful sperm whales are. But Melville knew a sperm whale’s head could smash a hole through an entire whaleship if the animal wanted. And that was plenty to fuel that little yarn he’d call Moby-Dick.