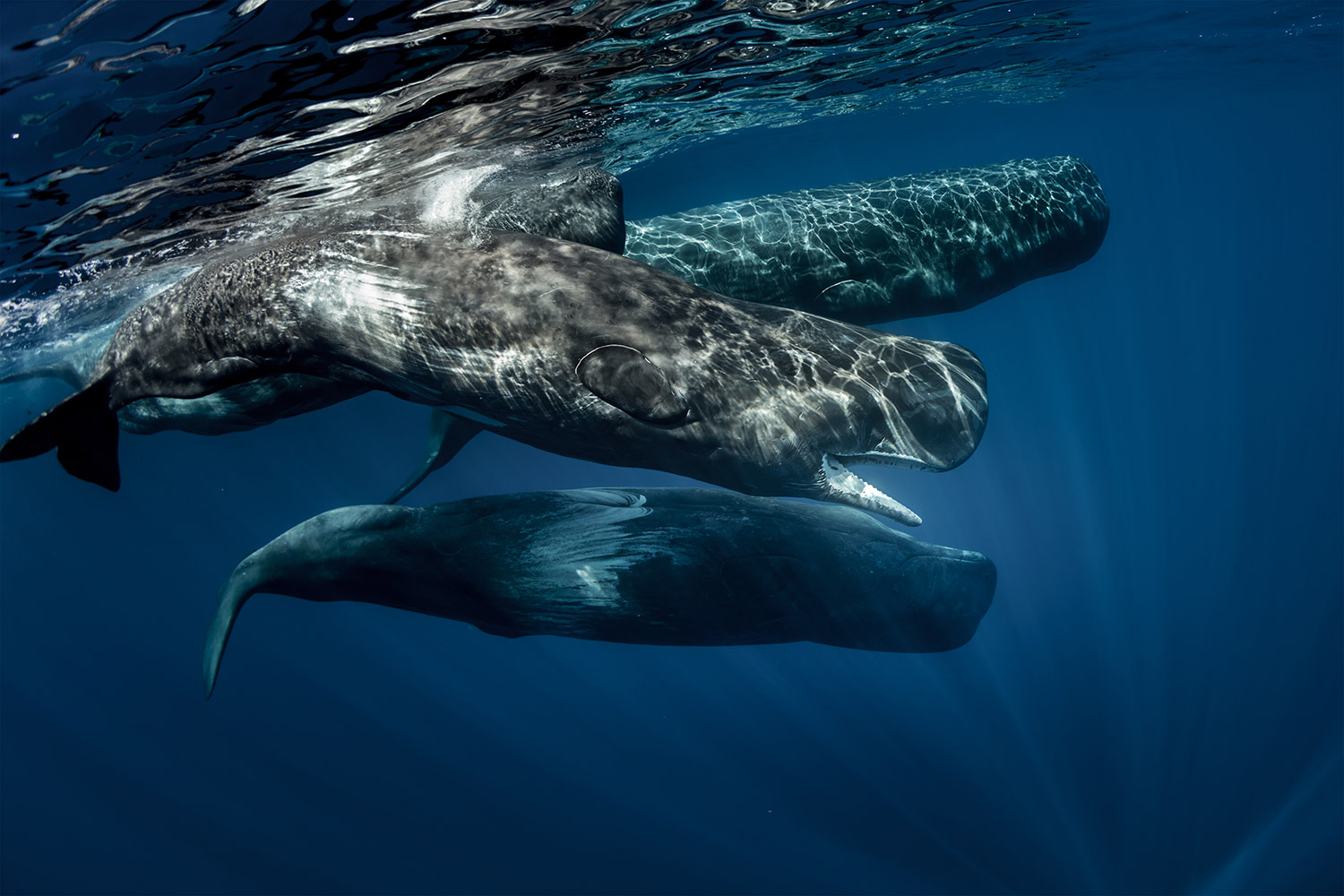 Scientific Name:
Physeter macrocephalus
Lifespan:
60-70 years
The sperm whale or cachalot is the largest of the toothed whales and the largest toothed predator. It is the only living member of genus Physeter and one of three extant species in the sperm whale

Detail from a painting by a whaleman, likely aboard the whaleship Young Phoenix. Courtesy New Bedford Whaling Museum.

In historic illustrations and comic books, angry sperm whales are constantly crunching up boats and whalemen in their mouths, as if they were pretzel sticks. This has always seemed a bit of a stretch to me. It turns out that, although sperm whales are typically shy and afraid of humans, when individual whales are harpooned—as they were by the thousands in the eighteenth and nineteenth centuries—the animals did indeed sometimes use their lower jaws and teeth to grasp and mash boats and men. There are just too many historic examples to dismiss them all, and modern studies of sperm whale behavior suggest it makes sense, too. 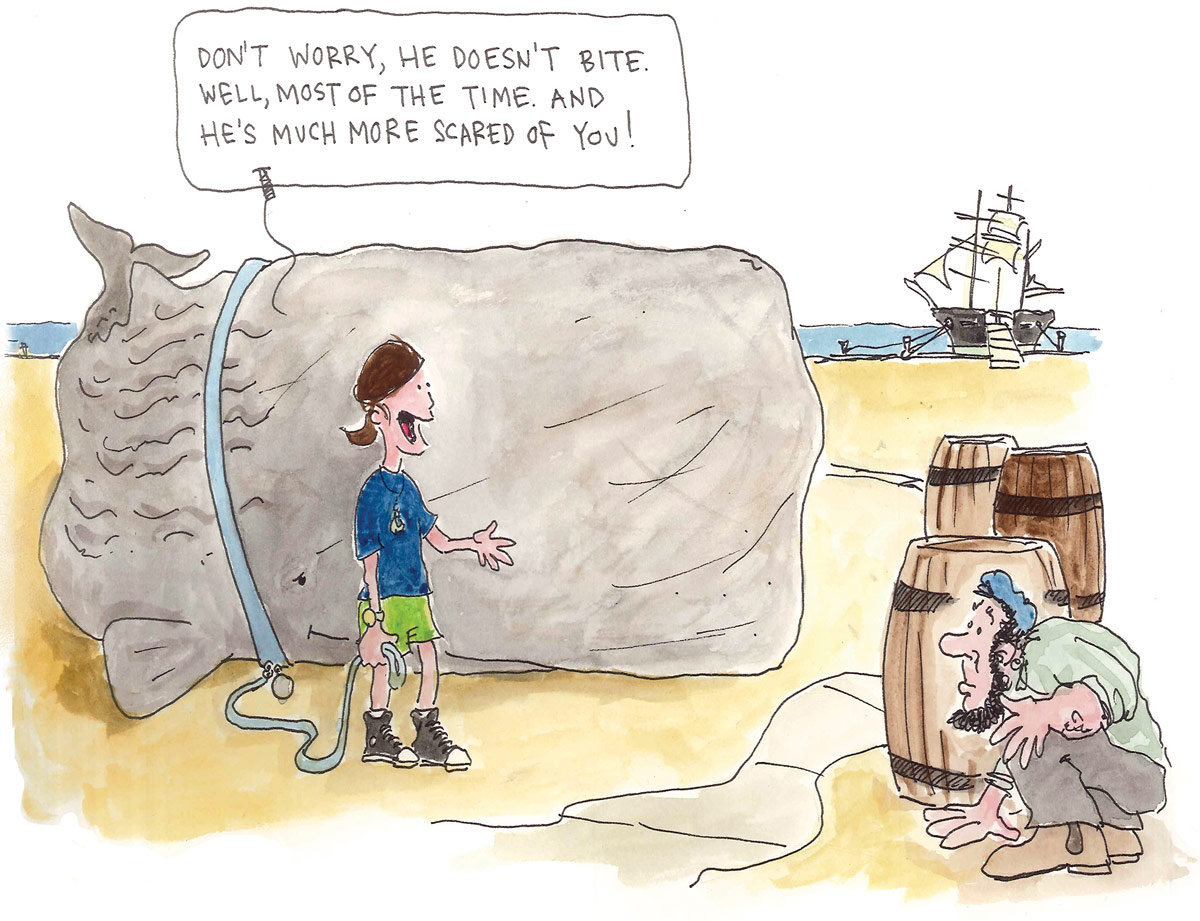 Here are three of the more reliable accounts. According to historian Margaret Creighton, in 1831 the chief mate of the Good Return, Henry Howland, drowned after he was carried down under the surface in the jaws of a whale after the animal smashed his boat. The whale then got hold of another sailor in his mouth, but this man survived. In 1840 Frederick Bennett, a surgeon and naturalist aboard a British whaleship, wrote that sperm whales commonly defended themselves with their jaws. He visited the whaleship Augusta in the South Pacific, where he saw a boat on deck that had recently been “nipped completely asunder by the jaws of a harpooned whale.” Bennett learned that sperm whales would continue to bite a boat into pieces and, when they were finished, would keep their mouths threateningly open for several minutes.

A third event took place on 15 August 1841. A mate of the whaleship Coral wrote in his journal that a sperm whale had bitten up their boats when they were just south of the Galápagos Islands. This was an enormous male, likely more than sixty feet long. Two boats had harpooned the bull, which rolled over and “chewed [one up] in many hundred pieces.” The whale was severely injured and blood began to collect in its blowhole, so when it spouted, its exhale was filled with blood. The mate said that the whale “entirely consumed” the boat and swam away, but they still had another boat attached to him with a harpoon. Their next attempt to kill the whale resulted in the death of one of the crew, as described by the mate in his journal: “While the third mate was in the act of lancing him, he turned upon him and eat his boat up also he not coming off so fortunate as the former boat for Richard B. Saunderson, foremast hand was drowned…on my approaching [the whale] he turned upon his side with his jaw open and pursued me, having avoided him and hove an iron into him I let him go and in a few moments he was in the agonies of death and breathed his last.” 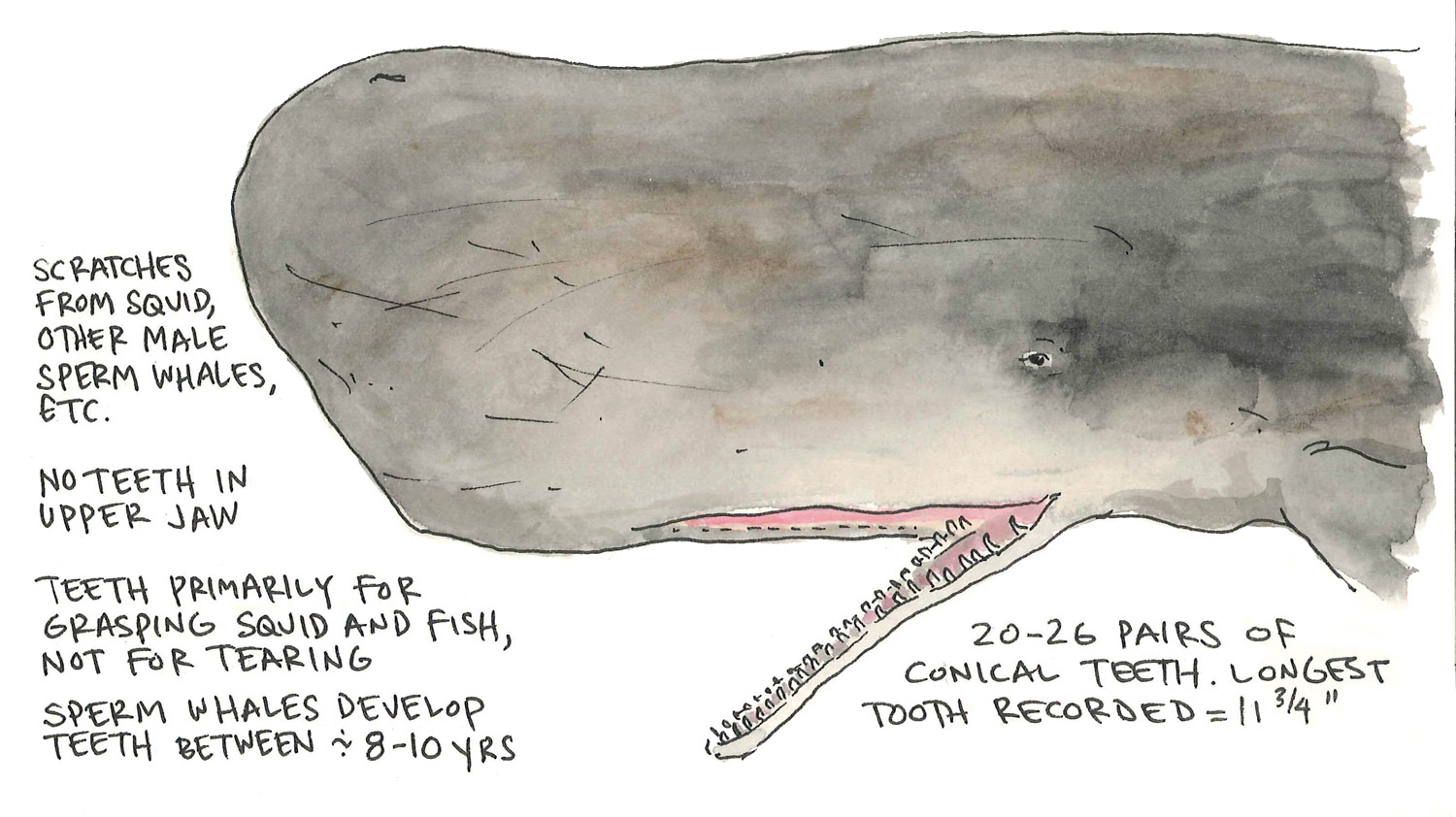 From a modern biological perspective, stories of sperm whales using their mouths to defend themselves against human hunters makes sense, although when they eat squid and fish, they really only use their lower teeth for grasping their prey, not for chewing or tearing anything apart. Young sperm whales don’t even have teeth until they begin to enter puberty, at about eight or nine years old. And adult whales with deformed jaws or no teeth at all seem to hunt and eat just fine. 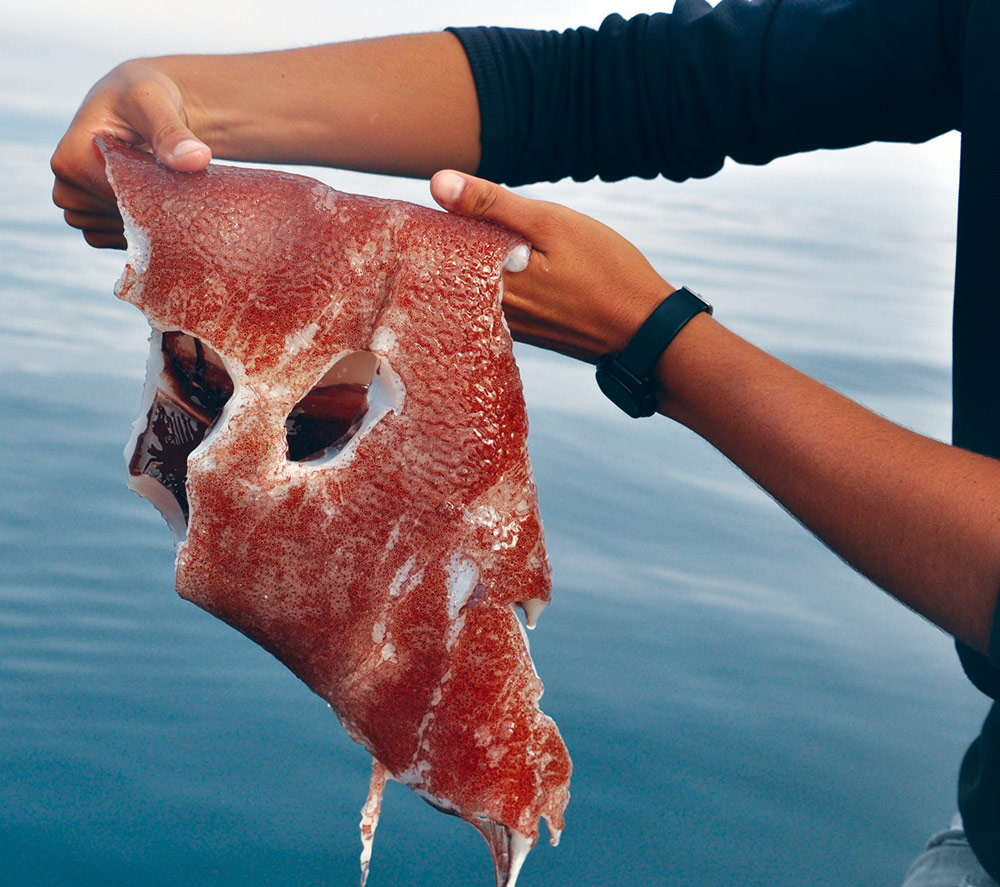 A piece of warty squid with sperm whale bite marks that was found in January 2018 floating on the surface of Kaikoura Canyon, New Zealand. Photo by Rebecca Bakker.

If you think about it, most terrestrial mammals act aggressively with their mouths—picture two dogs roughhousing. Some, if not all, of the other toothed whales are known to use their teeth aggressively, such as Risso’s dolphins, bottlenose dolphins, and Cuvier’s beaked whales. Modern biologists have observed female sperm whales using their jaws to defend against killer whales. There’s also ample evidence of rake marks gouged into the heads of older sperm whales, which imply male competition involves engaging in jaw-to-jaw battle, like bucks locking antlers or elephants battling with their tusks. Sperm whales might even use their mouths in play or affectionate behaviors, since one scientist-diver in 1991 described two occasions when sperm whales “were observed swimming belly to belly with their jaws slightly agape and touching,” and more recently a filmmaker-diver working on an episode of Blue Planet 2 was briefly, seemingly playfully, tugged down underwater by a young (toothless) sperm whale after the man had taken a bucket out of its mouth that the animal was chomping like a toy.

Even in the 1800s whalemen-naturalists knew that sperm whales were extraordinarily shy and skittish, which is still observed today. If attacked by humans or orcas, however, sperm whales will defend themselves. These behaviors include whacks with their enormous tails and lunging at their attackers with their mouths. Now, it seems hard to believe they would actually eat the wood of the boats, but whaleboats in the nineteenth-century were usually planked with very thin, light cedar, and necropsies have revealed a wide range of inanimate objects in sperm whale stomachs such as stones, fishing gear, coconuts, and even a human body.

Featured photo above: A snorkeler swimming with a sperm whale near Dominica in the Caribbean. Courtesy Natural World Safaris.