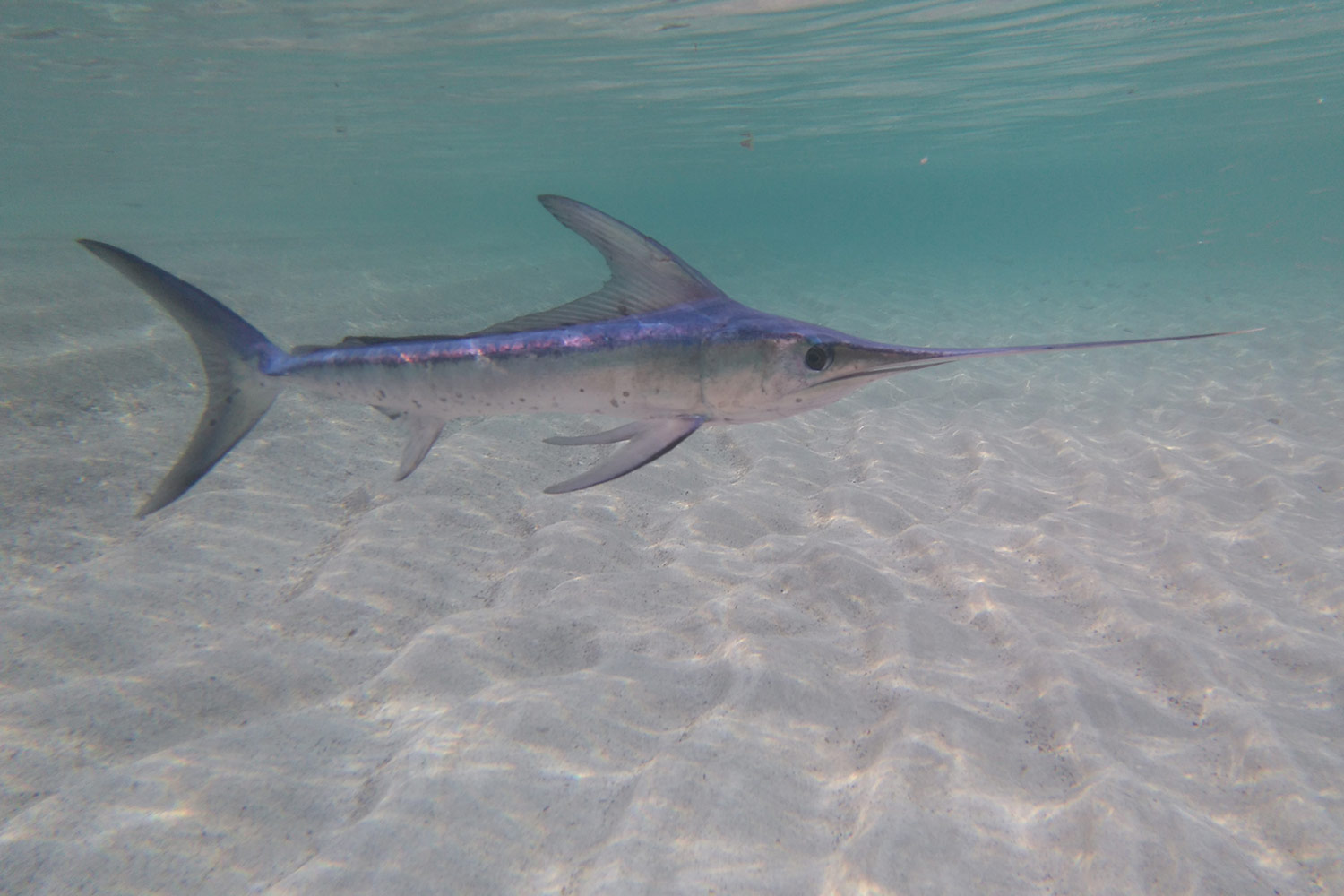 Scientific Name:
Xiphias Gladius
The swordfish can grown to over 1,200 lbs. and up to 14.5 ft. long. The females can be much larger. Their dorsal fin cannot fold down, unlike that of the tuna or marlin. 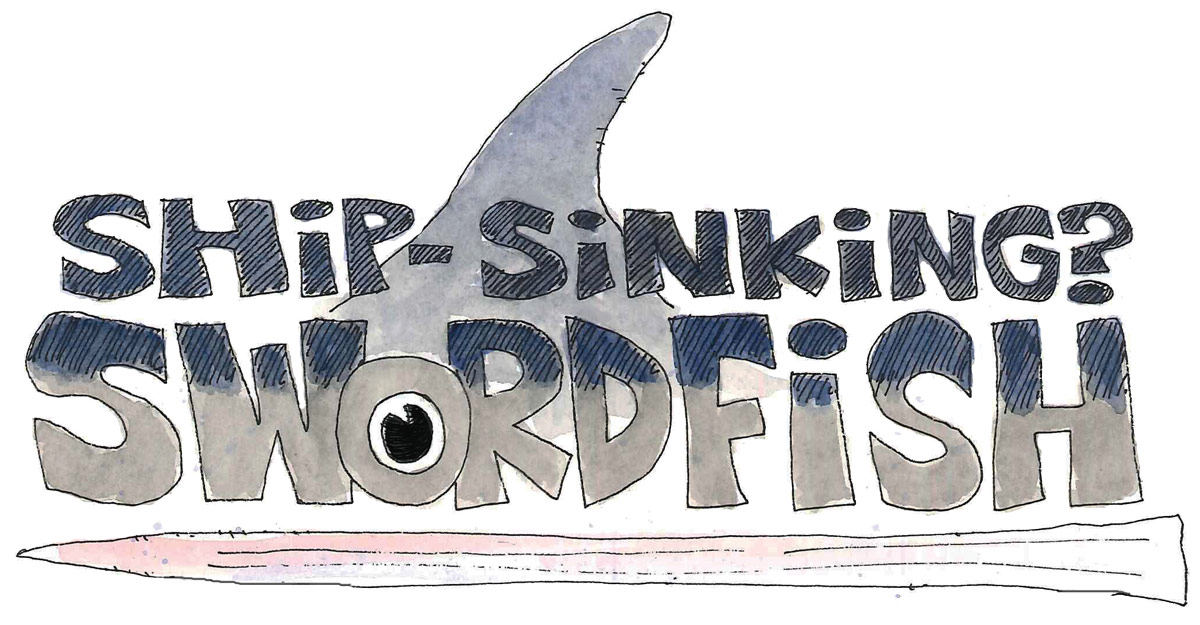 At one point in Herman Melville’s novel Moby-Dick, Ishmael spins a yarn about a mutiny aboard a ship that is sinking. The men fight each other while they desperately work the pumps to keep afloat. “They supposed a sword-fish had stabbed her.”

A swordfish sinking a ship? 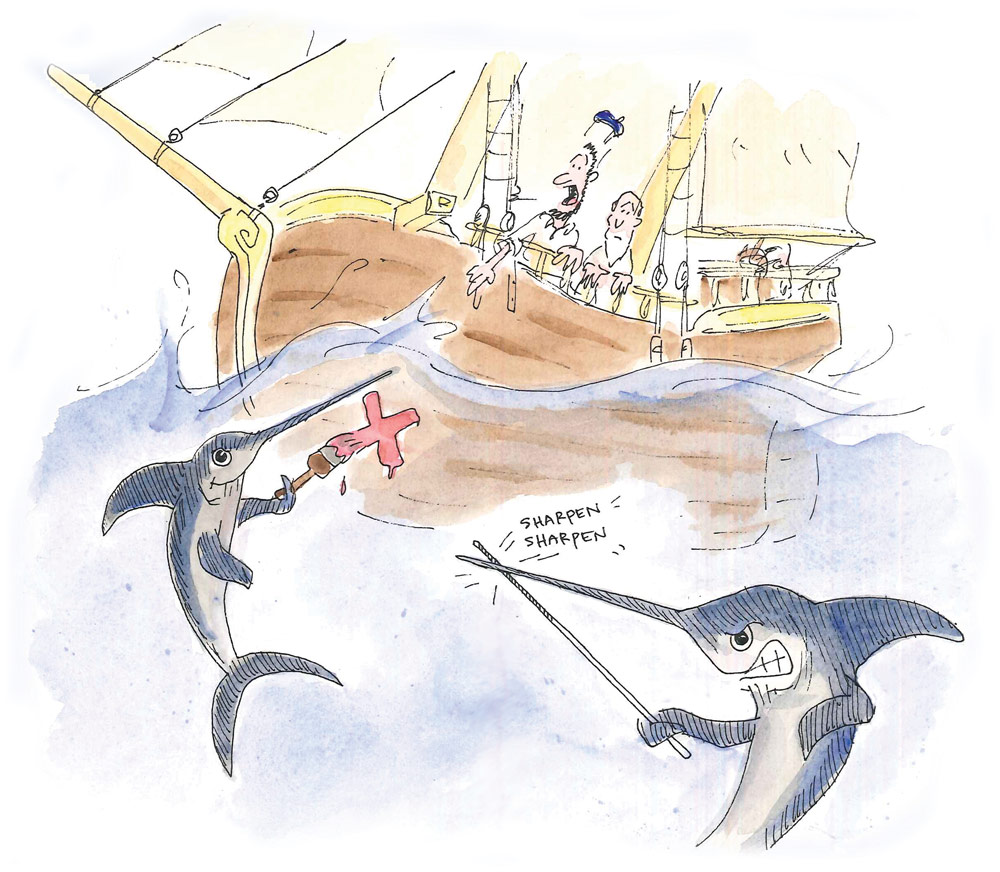 If you thought that was one of Ishmael’s jokes, it wasn’t a joke for Herman Melville. Swordfish poking holes in ship hulls had been on the author’s mind two years earlier in 1849 when he published another novel called Mardi. In this story, Melville devotes an entire chapter to extolling the valor and skill of this “true warrior” fish in the Indian Ocean. Melville writes: “He takes umbrage at the cut of some ship’s keel crossing his road; and straightway runs a tilt at it; with one mad [lunge] thrusting his Andrea Ferrara [a famous Scottish broad sword] clean through and through; not seldom breaking it short off at the haft, like a bravo leaving his poignard in the vitals of his foe.”

Melville goes on to tell the true story of the English ship Foxhound, which returned to London in 1836
with a swordfish bill lodged in its hull. The hunk of wood was removed and preserved with the fish’s sword stuck in it. Melville also spins a tale of a swordfish that stabbed the whaler Rousseau in the South Pacific, forcing the ship to make an unscheduled run to Tahiti before she sank to “have her wound dressed by a ship-surgeon with tar and oakum.” 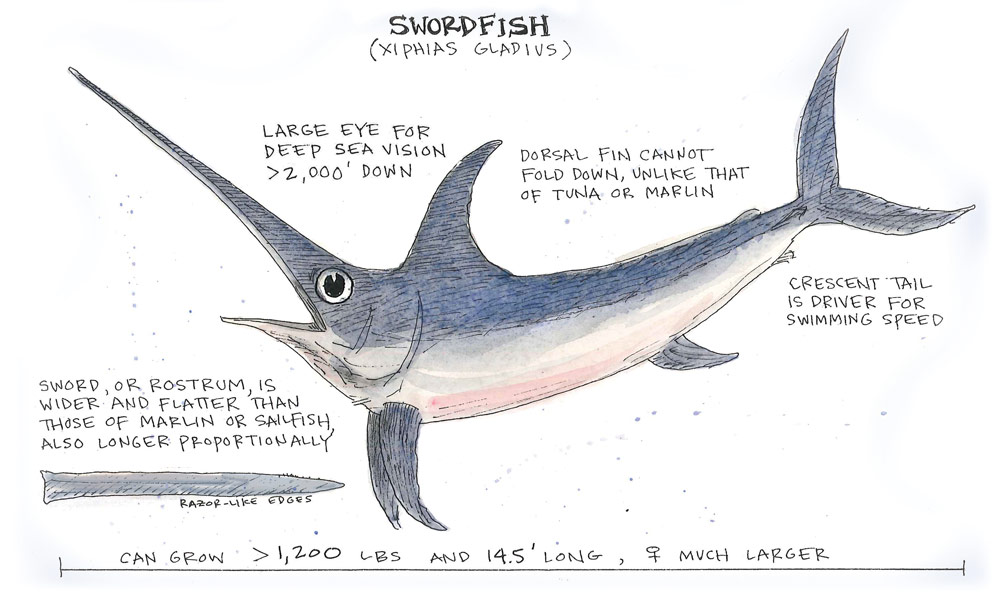 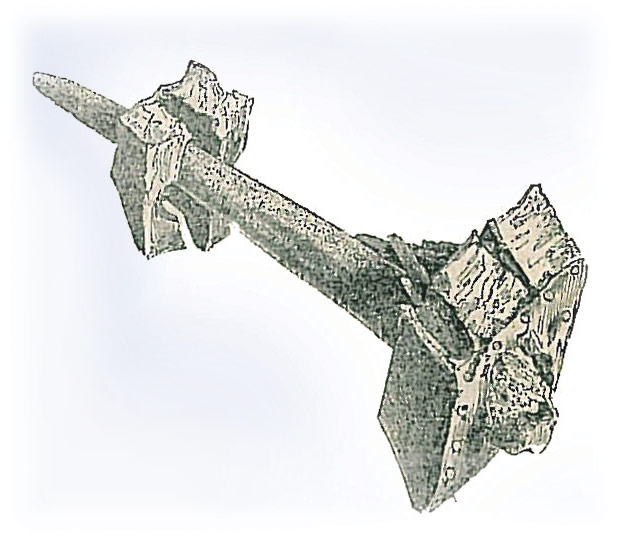 An illustration in The Penny Magazine, 1835, of a billfish’s rostrum piercing the inner and outer timbers of ship’s hull, a hunk of which is still held by the British Museum (This might’ve been the one Melville wrote about.).

Up until the 1940s researchers thought it was stabbed by a swordfish, but recent analysis of the piece of wood shows it was a marlin. Note the copper sheathing at the far right!

Foxhound crewman Frederick Bennett described how a swordfish’s bill pierced his ship’s hull—even through its protective copper sheathing—and broke off, much like what happens to a bee’s stinger. The swordfish bill remained lodged in the ship’s planks, from the South Seas all the way home to England. Bennett’s narrative was published in 1840. Regarding Melville’s story about the Rousseau, historians have found no record of its sinking by swordfish in the logbook of the Rousseau. Melville made this part up.

Before the regular production of steel hulls in the early 1900s, several mariners reported swordfish “attacks” on their boats and ships—going back to the Greeks and Romans—although it’s possible sailors confused the swordfish with marlin or sailfish, which have bills that are more narrow and cylindrical but have similar behaviors and appearance. Dorymen out fishing on the North Atlantic also reported swordfish stabbing through their boats with their bills, sometimes in seeming retaliation for being hooked.

More recently, swordfish have even entangled themselves with steel hulls and manmade underwater structures. In 1967 off Savannah, Georgia, the pilots of the Woods Hole Oceanographic Institution’s submersible Alvin, at some 2,000 feet below the surface, reported that an eight-foot swordfish stabbed at their little submarine and got itself stuck. Technicians got a rope around the tail when the ship surfaced, but the sword broke off. (And for a riveting video of a swordfish stuck in a deep-sea drilling platform, go to YouTube and search for “Swordfish Stuck in Oil Rig.”)

So—are these swordfish actually trying to sink ships? Mariners and biologists have never had a good understanding of how swordfish actually use their bills, which can grow up to a third of their total length. Perhaps they use their gigantic rostrums to defend themselves against sharks. Earlier naturalists thought that swordfish stabbed their prey, which are mostly smaller fish. But this doesn’t make much sense: how would they get the meat off the tip? Swordfish also have relatively small mouths and no teeth. From the deck of his ship back in 1840, Frederick Bennett observed that swordfish tended to slash back and forth through a school of smaller fish. Modern underwater footage confirms that swordfish kill their prey with the sharp edges of their bill, cutting fish into smaller pieces that they can then can gulp whole. 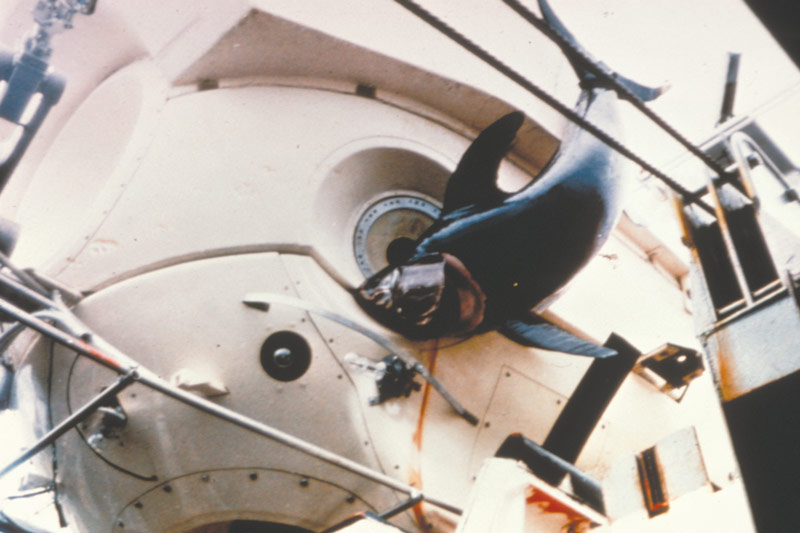 Alvin back at the surface with a swordfish stuck in its side.

A reasonable explanation as to why they might stab the hull of a boat might also be that they are slashing through the schools of fish that often congregate under a slow moving hull in the open ocean. But that doesn’t seem to explain the interaction with Alvin or several other submersibles. Even in the prophetic science fiction novel Twenty Thousand Leagues Under the Sea, published two decades after Mardi, Jules Verne had his Captain Arronax report swordfish stabbing at his submarine’s glass. Perhaps indeed there might be some sort of aggressive or defense response to large manmade hulls, mistaking them for sharks or killer whales? Author Richard Ellis records that Alvin pilots wonder if it is the light from the submersible, a reflection of the fish in the acrylic portholes, or even a sub-
mersible’s similarity to a deep-sea squid.

Herman Melville would surely be pleased with our current uncertainty, even if we know of no actual sinkings by swordfish spikes. Maybe that’s why the author turned to a white whale instead. In the next issue: the forgotten art of swordfish painting?