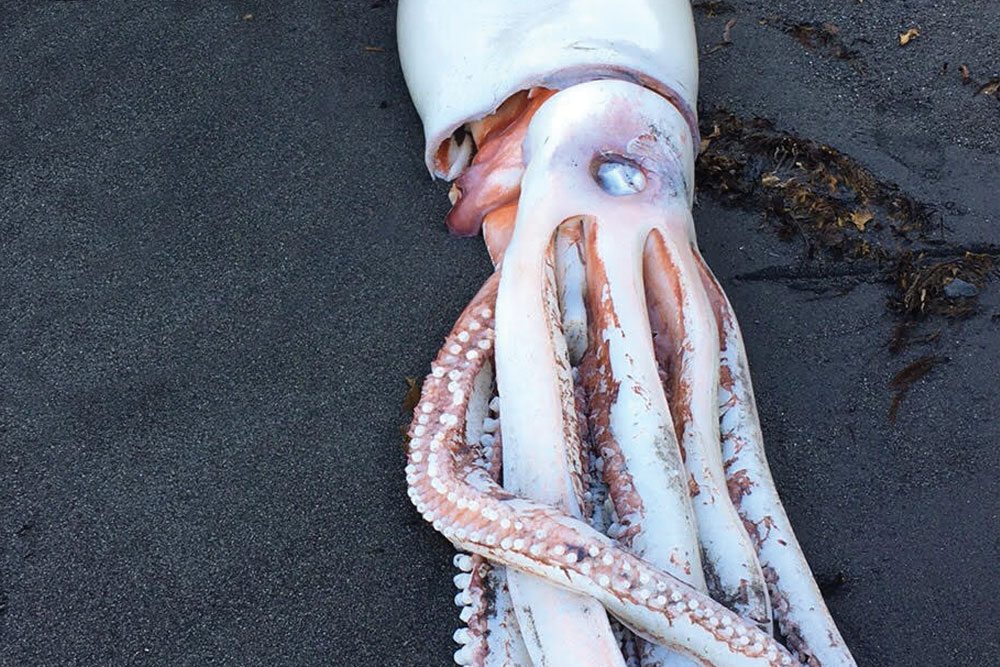 Scientific Name:
Architevthis Dux
Recent estimates put the maximum size at 13 m for females and 10 m for males from the posterior fins to the tip of the two long tentacles. 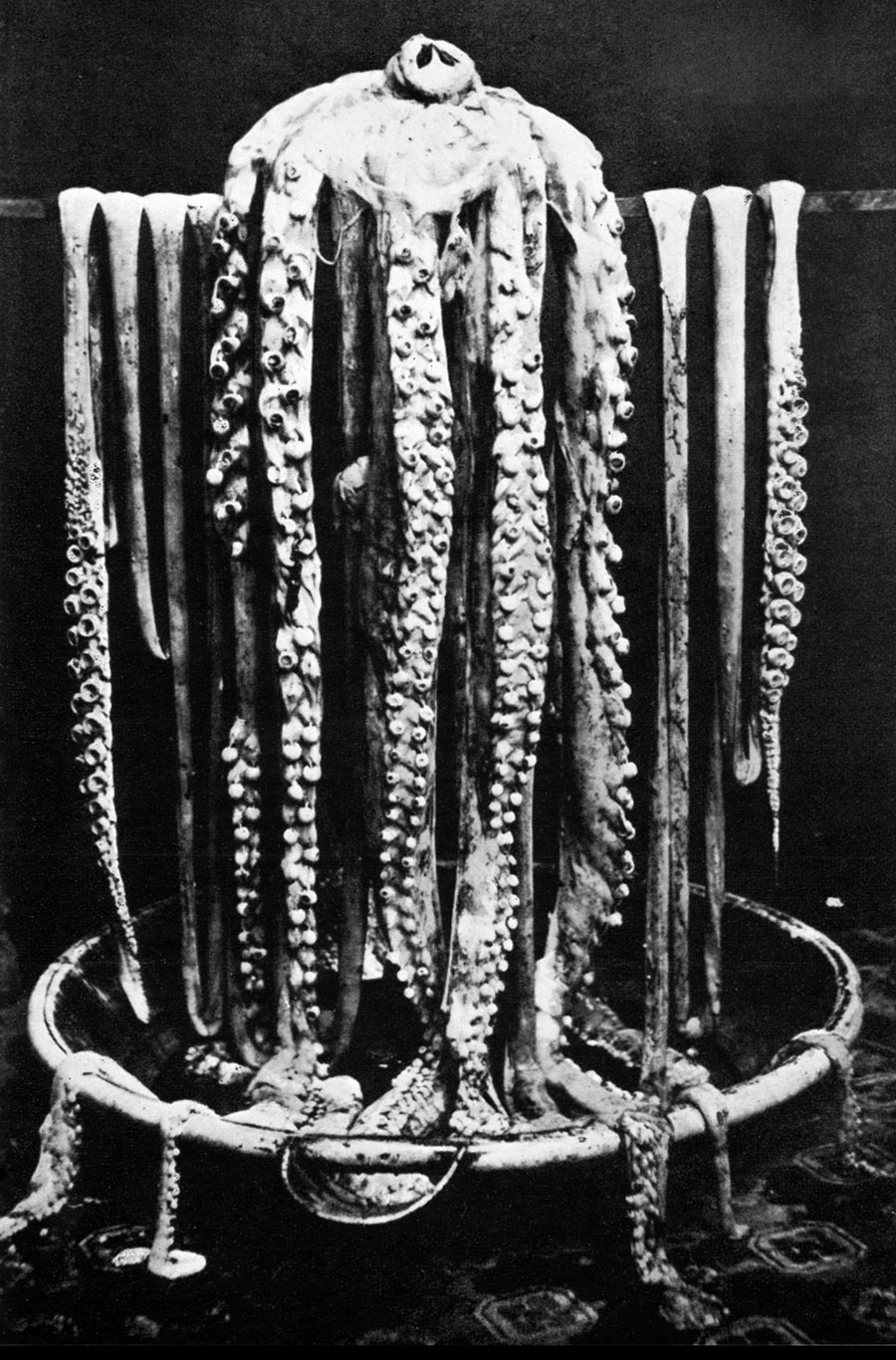 The first giant squid ever photographed, in Moses Harvey’s living room, in 1873. Image courtesty of wikipedia.com.

The first known photograph of a nearly complete specimen of a giant squid was taken in 1873 in the living room of a reverend living in St. John’s, Newfoundland. Those are eight 6-foot-long arms sliding down in the middle (in the photo below), while on each side, draped up and down, are the two tentacles, each 24 feet long. At the top is the squid’s mouth, with its dark parrot-like beak seeming to poke out of the flesh. This photograph is especially cool and significant, not just because it looks like so creepy and alien, but because how big a news story it was at the time, especially to scientists and sailors. Both communities had heard of these animals, and had told and retold stories of questionable believability, but so few had any real proof of what these animals looked or felt like, and how big they actually were.

Beginning in 1871, scattered accounts of giant squids began to return from the sea off the Canadian Maritimes. In November of 1873, most famously, a fisherman with an axe chopped off a 19-foot-long tentacle that reached into his small boat. The tentacle was sold to Moses Harvey, a reverend and author who was also a student of natural history. He wrote later: “I was now the possessor of one of the rarest curiosities in the whole animal kingdom—the veritable tentacle of the hitherto mythical devilfish, about whose existence naturalists had been disputing for centuries. I knew that I held in my hand the key of the great mystery.”

As Harvey was writing a scientific paper about the tentacle and sending it to his local museum in St. John’s, he got word a few weeks later that just to the north, in Logy Bay, four fishermen had hauled up another giant squid in their herring net. In the struggle to kill the enormous invertebrate with their knives, they ended up cutting off most of the animal’s head from the rest of its body. Harvey paid them ten dollars for the carcass, on the condition that they help him cart it back to his house. Here Harvey took this photograph, draping the dead squid over a sponge bath rack, and then invited visitors to come see it. 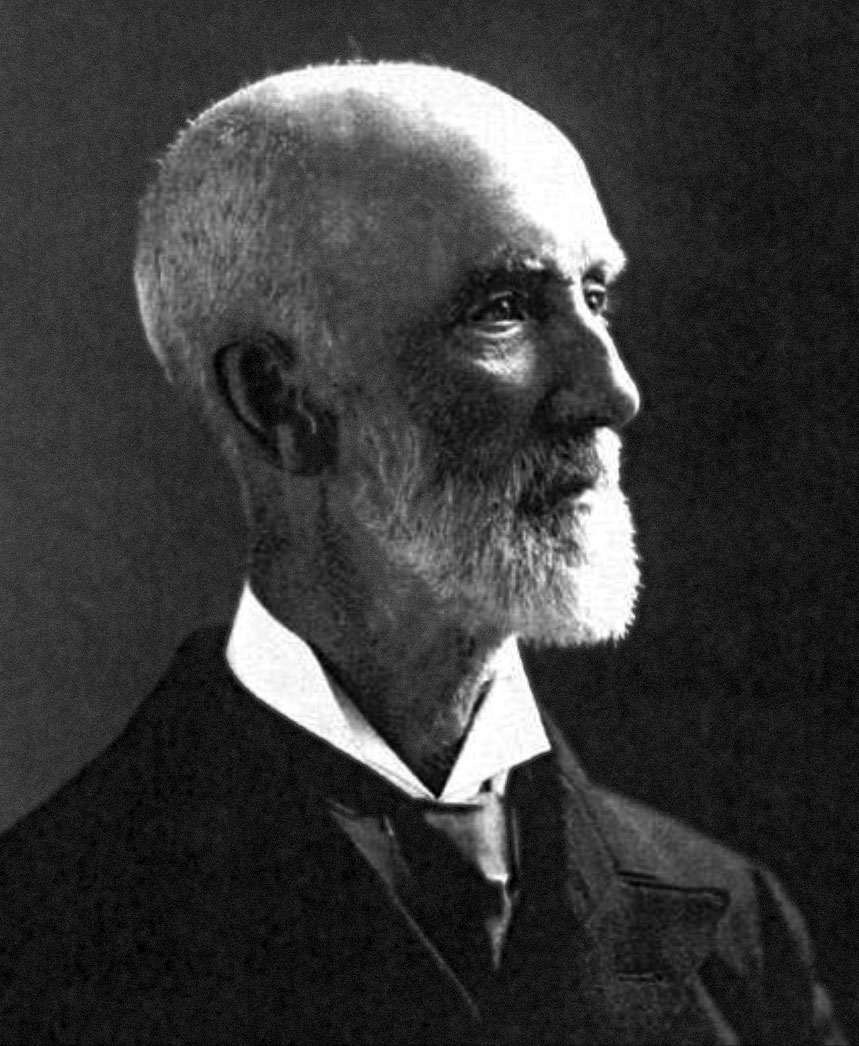 Reverend Harvey eventually sent the specimen down to New Haven, Connecticut, to a young scientist named A. E. Verrill, who would compile with his artist colleague, James Emerton, the first scientific study and set of illustrations of giant squids that had ever been published anywhere in the world. From these specimens, and others that were sent down from Newfoundland, Verrill and Emerton created the first accurate model of a giant squid, a 40-foot-long plaster structure that was displayed at the International Fisheries Exhibition in London in 1883.

Giant squid are deep-sea animals. In order to survive in the dark, they have eyes as big as soccer balls. They are not known to spend any time at the surface at all—unless they’re dead—at which point they are quickly eaten by sharks and seabirds. Their primary predators are sperm whales, smaller toothed whales, and large fish, such as swordfish and tuna. 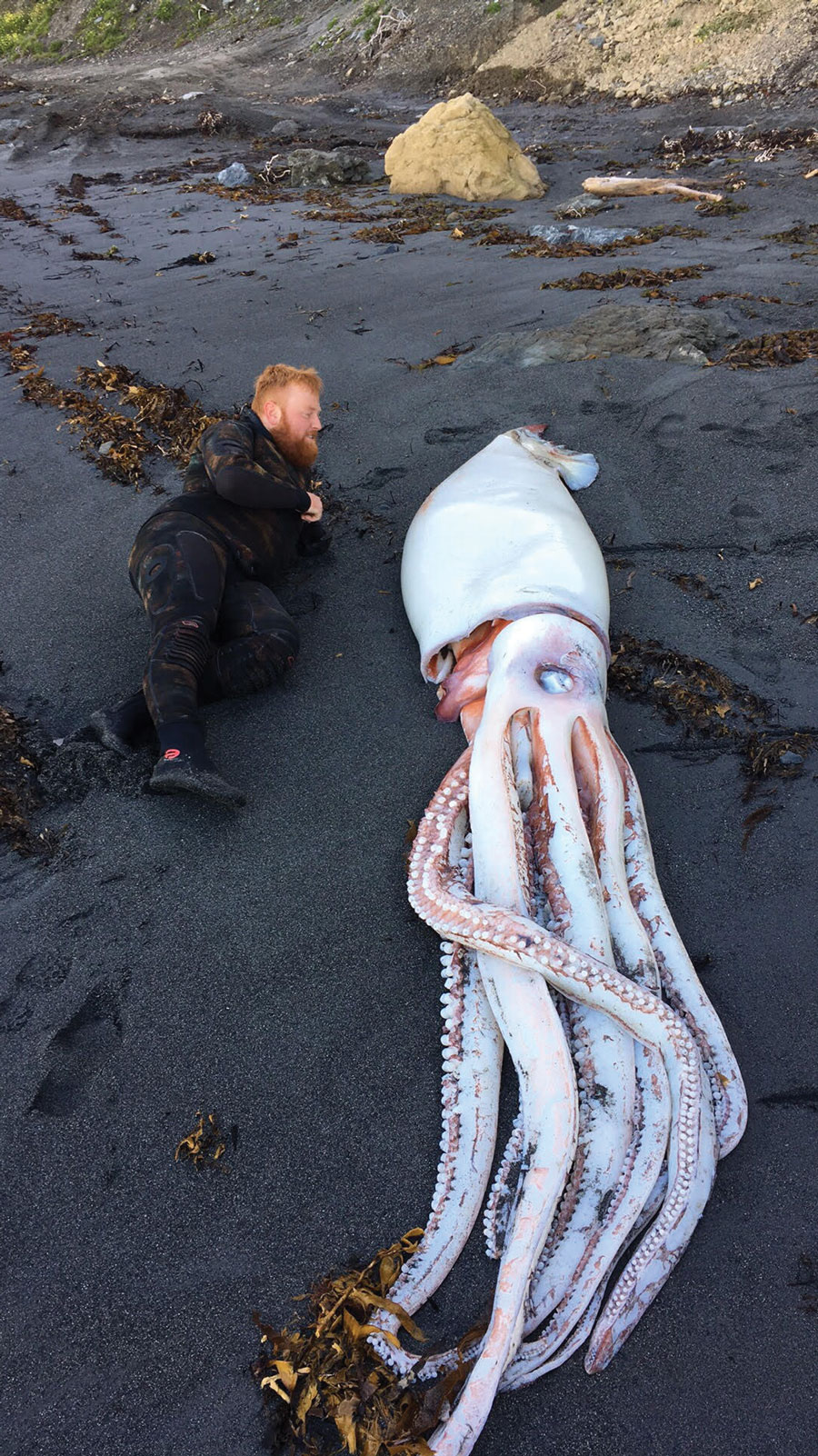 A freshly-dead giant squid that washed up on the southern coastline of Wellington, New Zealand, in 2018. Giant squid are mostly red, but can turn white in death and their outer red skin can also get scraped off by the sand of a beach. Courtesy Dan Aplin.

By now, there are roughly 50 or so known complete specimens of giant squid in collections around the world, usually stored in formalin or in freezers. These are among some 500 recorded ever, anywhere, found in a range of physical states—just the mantle here, only three arms washed up there—that were once measured and recorded carefully or whose length a biologist, beachcomber, fisherman, or whaleman estimated out in the field. Often giant squid parts were found inside the stomachs of sperm whales or vomited out when the animals were being chased or killed.

Since Reverend Harvey’s photograph, other photos of dead, beached squid have been published on occasion, but it was not until 2004 that a Japanese biologist named Tsunemi Kubodera was able to capture a photograph of a living giant squid—on a baited trip line at nearly 3,000 feet deep. The tentacles of giant squid can get stretched out, but if Harvey’s giant squid were indeed about 32 feet in life, as estimated, this would be about average for adult females, which are larger than males. Current biologists, based on collected parts and growth rates, believe that there are 50-foot, or maybe even 60-foot long giant squids somewhere out there. Needless to say, if you see one, of any length, be sure to snap a photo, as did this diver last year in New Zealand! 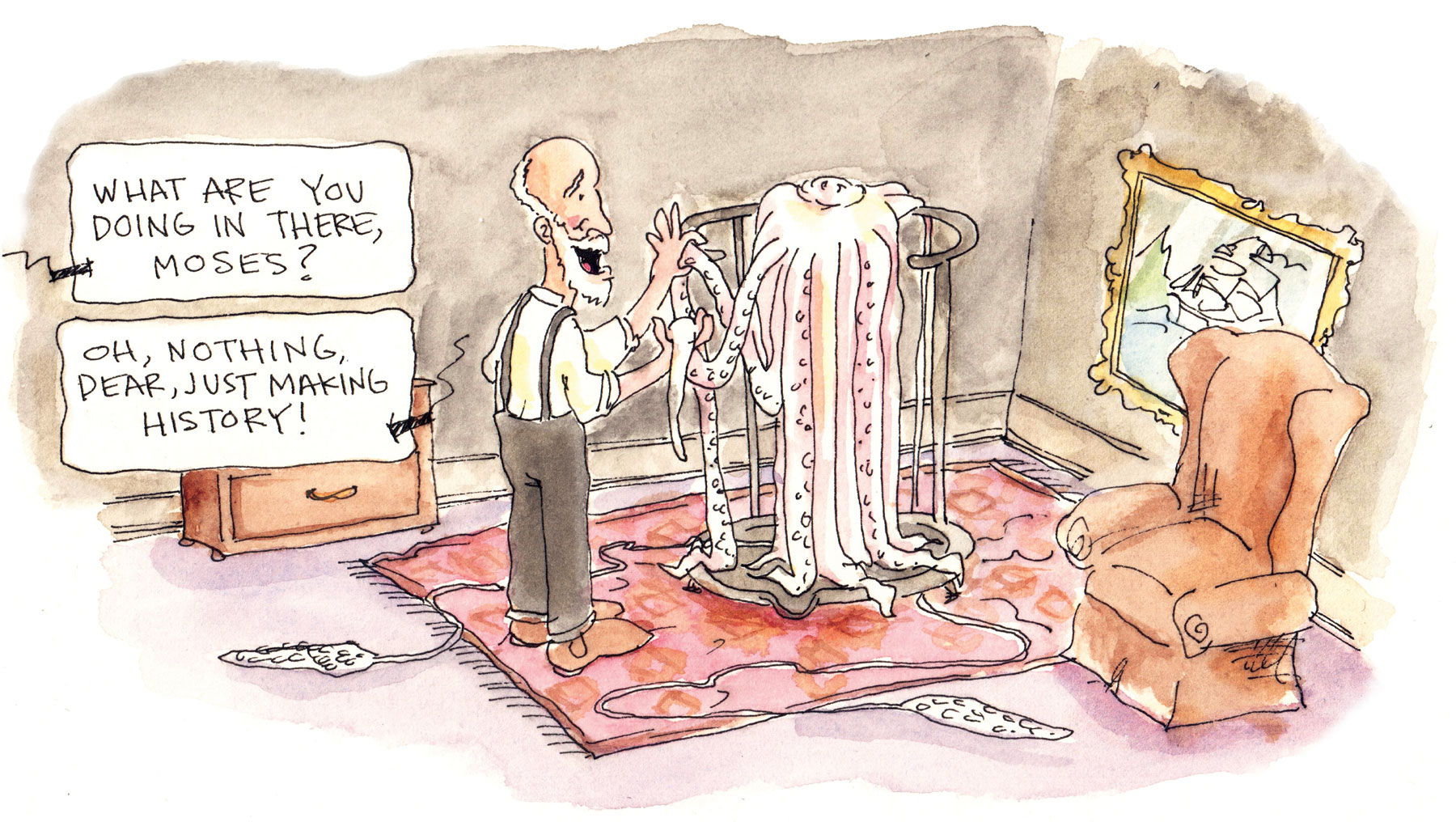