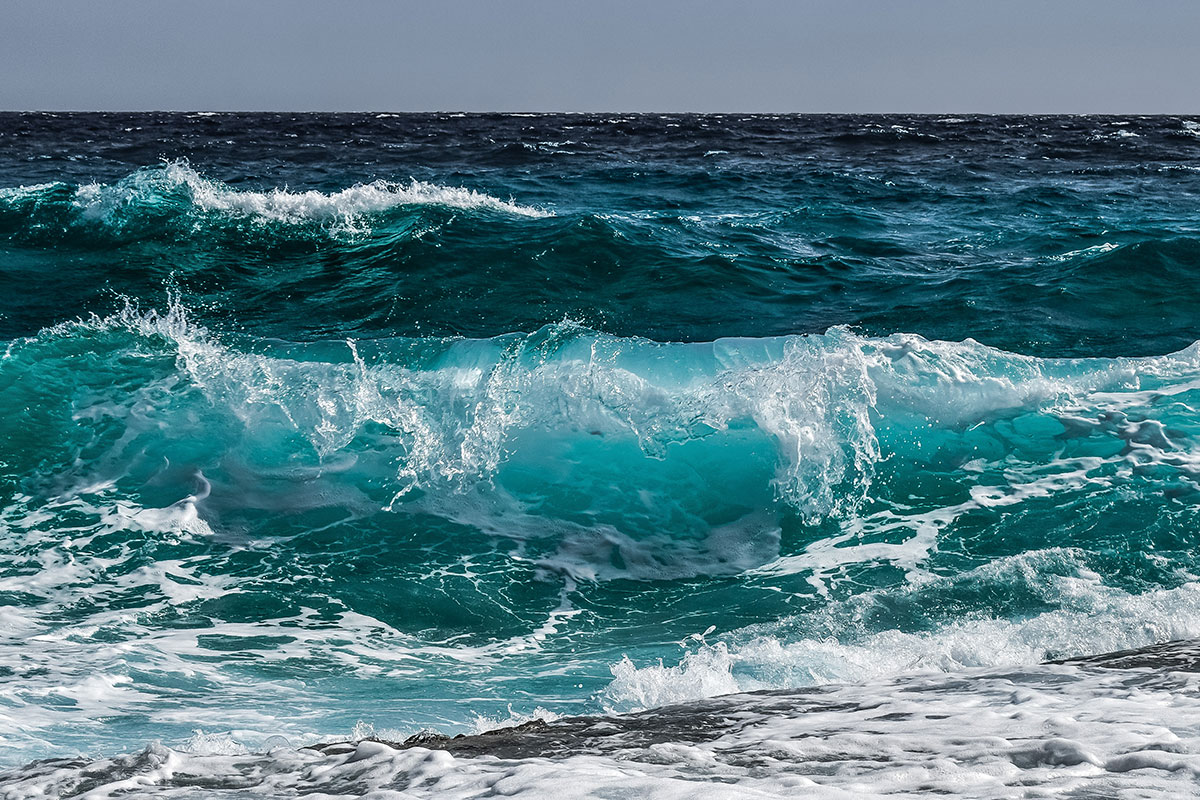 Most people use the terms sea and ocean interchangeably. Someone going on an offshore voyage might say they are “going to sea” or sailing on the “high seas,” but in terms of geography, seas are smaller bodies of water either located where land and ocean meet, or partially enclosed by land (the Mediterranean Sea and the Black Sea, for example).

The term Seven Seas has been around since at least ancient times. It shows up in a Sumerian hymn written around 2300 BC, and the term was often used by ancient Greeks. What people refer to as a sea has changed over time and place, and is generally referred to as what was known to them at the time. For example, to inhabitants of Asia and the Middle East, the seven seas comprised the Bay of Bengal, the Arabian Sea, the Gulf of Thailand, the Singapore Strait, the Strait of Malacca, the South China Sea, and the Persian Gulf. The Greeks defined the seven seas as the Caspian, Mediterranean, Black, Red, Adriatic, Aegean Seas, and the Persian Gulf. Once Europeans traveled across the rest of the globe, their list of known seas grew; geographers today recognize that the earth has fifty seas.

Even the number of oceans is often debated. For generations, people said there were four oceans on earth: Atlantic, Pacific, Indian, and Arctic, but today most people also include the Southern Ocean around Antarctica to be a distinct body of water. Some people prefer to discuss the earth’s Global Ocean as a single body of water, considering that all oceans are connected. 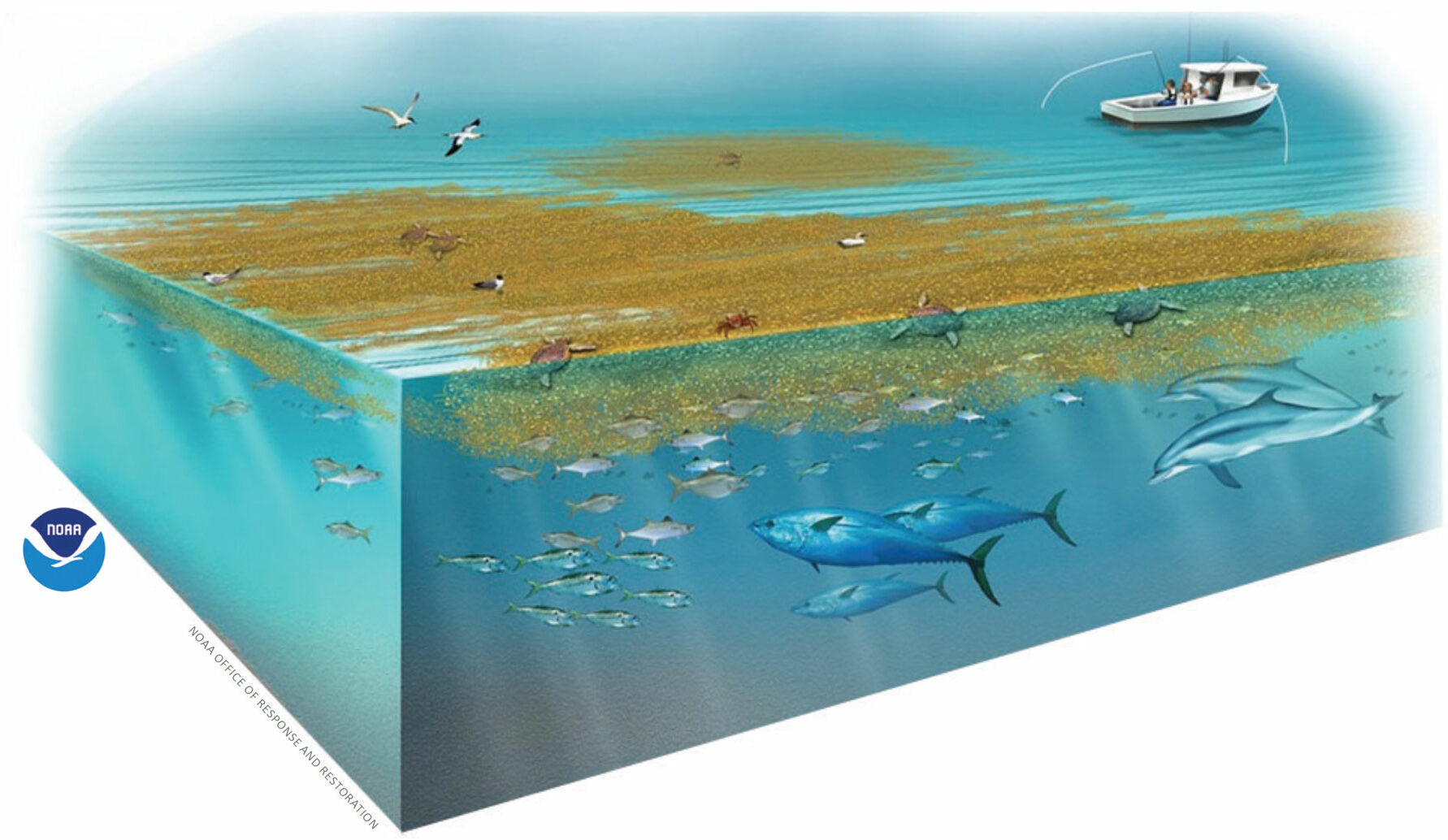 Cutaway graphic showing sargassum and the marine life that depends on it for habitat, food, and protection. Sargassum is a type of brown algae that forms a highly productive floating ecosystem on the surface of the water. In the Sargasso Sea, ocean currents on all sides concentrate sargassum in giant mats in the open ocean. 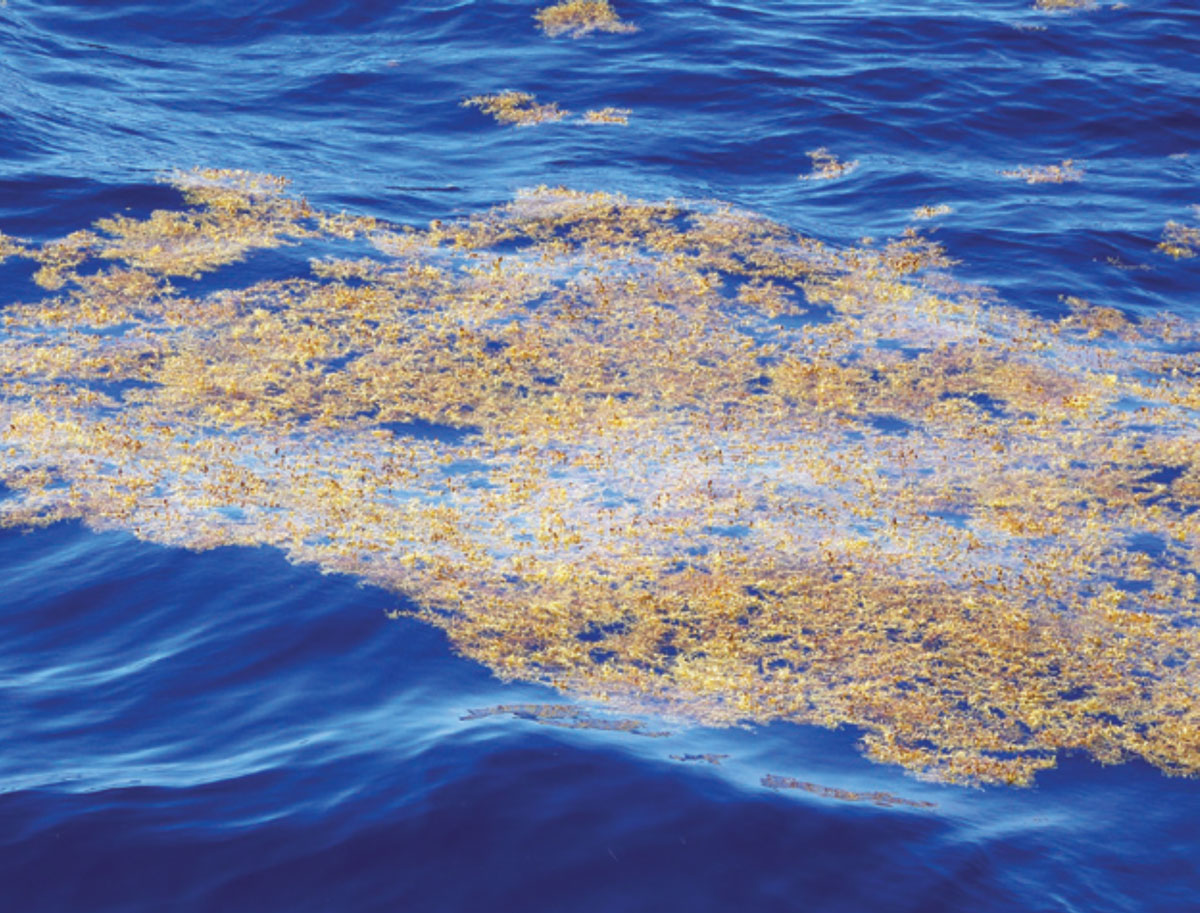 Sargasso mats can stretch for miles and are easily noticed by mariners in the area. (Photo: NOAA.)

Another exception is the Sargasso Sea, a patch of the Atlantic Ocean bounded only by ocean currents: the Gulf Stream to the west, North Atlantic Current to the north, the Canary Current to the east, and the North Equatorial Current along its southern edge. Why Sargasso? Sargassum is a type of floating algae, which get pushed into the middle of this mid-ocean sea by the surrounding currents. Sailors can tell when they have entered the Sargasso Sea because they can see giant mats of seaweed floating at the surface.

Whether you are a seven-seas poet or a fifty-seas geographer, whether your sea is salty or fresh, the power and beauty of our oceans and seas is something mere words struggle to describe, and could never contain.