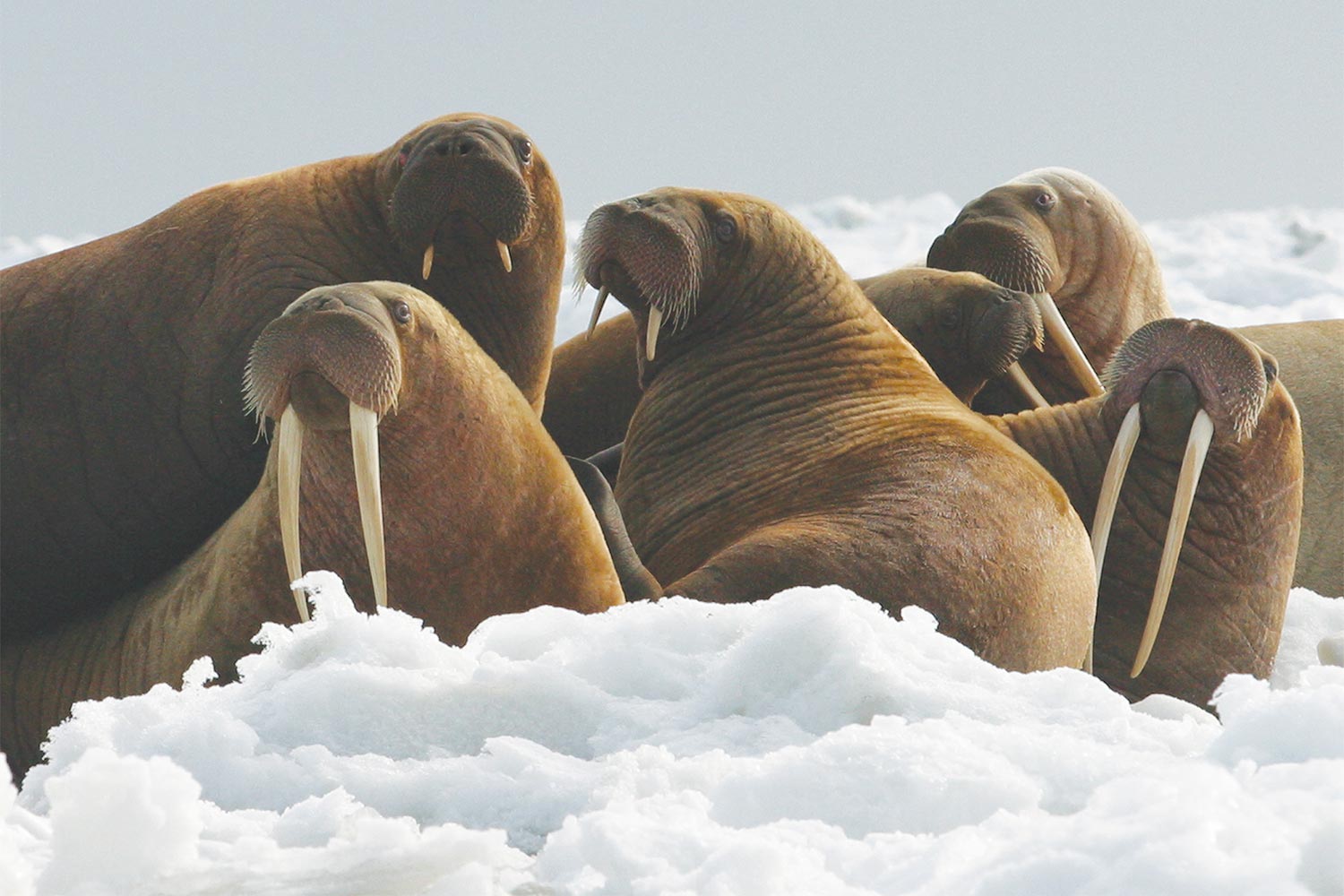 Scientific Name:
Odobenus rosarus
Lifespan:
Approximately 40 years
The walrus is a large flippered marine mammal with a discontinuous distribution about the North Pole in the Arctic Ocean and subarctic seas of the Northern Hemisphere.

Looking over the rail of the boat, Matthew Henson knows he will die in minutes if he falls into this water. He is in a polynya (an ice-ridged expanse of open sea) that extends into Ikeq-Smith Sound, between the far northern tips of Nunavut and Greenland. Yet the walruses, for which Henson is searching, swim comfortably under the icy surface. Walruses have a thin layer of hair that grows over leathery, wrinkly skin that can be 1 ½” deep, and underneath that they have an insulating layer of blubber that can be nearly 4 inches thick. 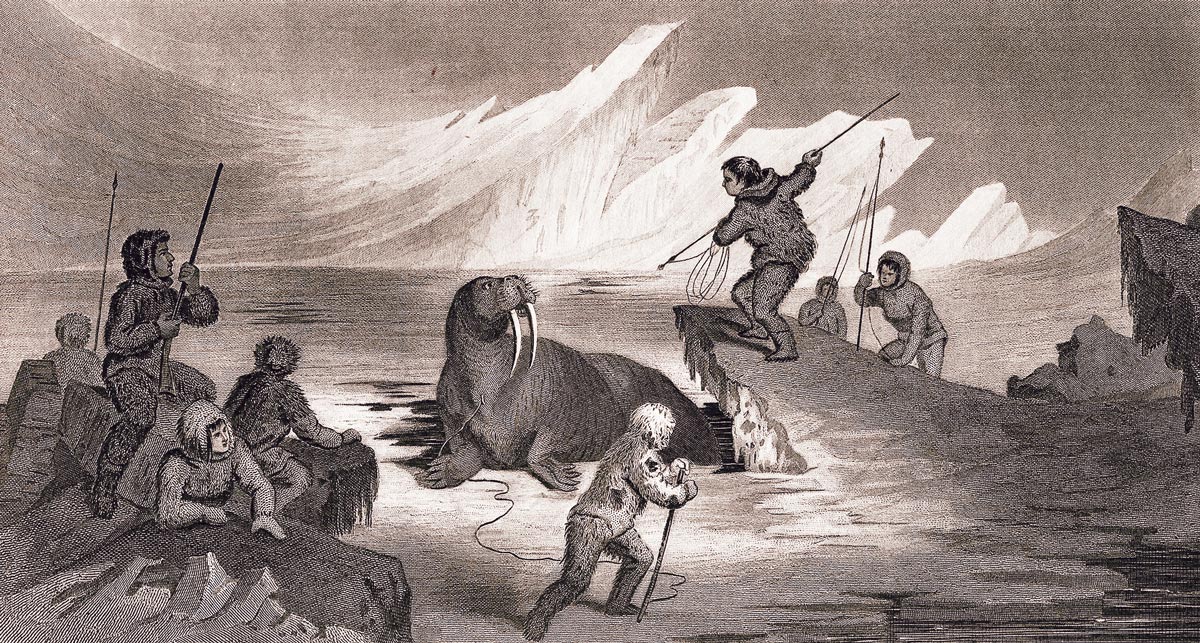 Engraving of “Walrus Hunt off Pikantlik” from Arctic Explorations (1856) by expedition leader Elisha Kent Kane, who had voyaged to the same Ikeq-Smith Sound region as Henson.

It is 1908. Already north of 75˚N latitude, Henson and his shipmates aboard the steam schooner Roosevelt are slowly making their way farther north, pausing here to do some hunting. On board is Commander Robert Peary, who is seeking to lead the first expedition to reach the North Pole. Henson, gifted carpenter, sailor, organizer, and hunter, is his right-hand man. At 42, he now has been going to sea for thirty years. Orphaned as a child, he first shipped out as a cabin boy on a ship bound for China from Baltimore. By the time of this expedition, he is a veteran of several Arctic expeditions and fluent in the local Inuit language. Both the Inuit and the American crew respect him as the expedition’s most-skilled sled driver and dog handler.

This afternoon Henson and a few shipmates are hunting for meat to fortify them and their dogs for their upcoming attempt to reach the North Pole. They head out in the ship’s motorboat, but when the engine sputters out they break out the oars and row. Henson shoots and kills two walruses, and the men shed layers of clothes as they tow the heavy animals back to the ship. After hoisting the carcasses aboard and into the hold, Henson leads the crew back out, this time with a larger whaleboat and more oarsmen. They kill four more walruses.

Over the following days, as they continue to hunt and allocate the meat in different ways, using every part of the animal in some fashion, Henson takes particular care with two of the walrus skins, which he has been asked to prepare to send home to be stuffed and mounted, presumably for museums.

The Roosevelt continues north. They spend a long winter at their camp at the far northern edge of land, braving temperatures of -50˚ F and constant darkness, their dogs surviving on the walrus meat. As the winter eases, the men and dogs begin their trek across the frozen Arctic Sea, bound for the Pole. It is a risky mission. En route they have to sledge across the ice and dangerous leads of open water to reach the spot Peary calculates to be the North Pole, arguably the first people to ever do so. 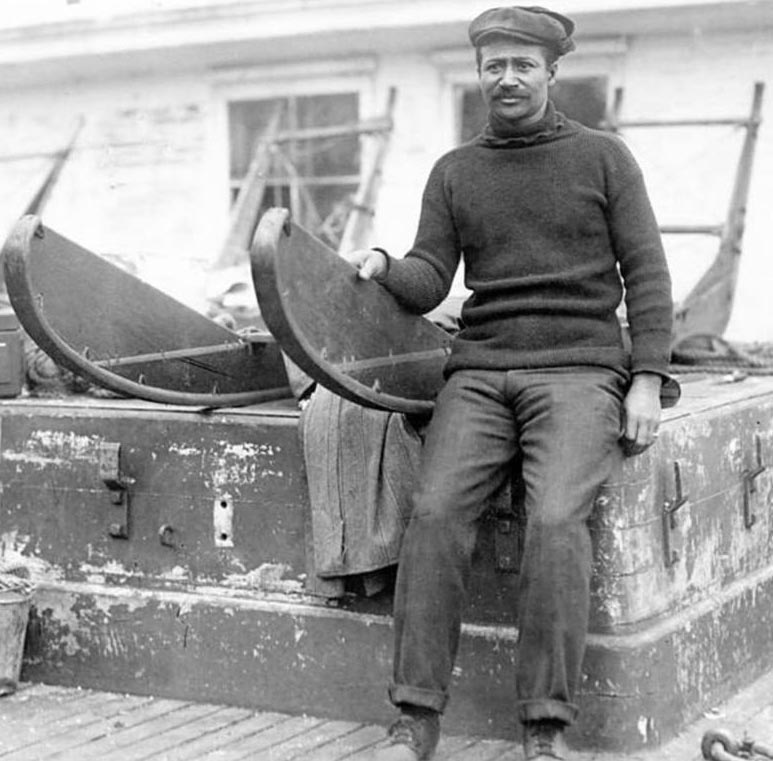 In addition to his skills as a hunter and sledge driver, Matthew Henson (above) was a master carpenter who built and repaired many of the team’s sledges. The sledges had to hold up against rough usage, carrying the expedition’s supplies across the ice on their way to and from the North Pole. Here is Henson leaning against one of the sledges on the deck of SS Roosevelt.

In his book about his experiences, Negro Explorer at the North Pole, Matthew Henson included several intriguing observations about walruses, especially in relation to the dwindling tribe of Inuit people living at the far northwest of Greenland. In the 1800s and early 1900s, American and European ships sailed to the region to hunt whales, seals, and walruses in great numbers. Although he and his shipmates killed at least seventy walrus themselves over the course of their trip, Henson reflected: “It is sad to think of the fate of my friends who live in what was once a land of plenty, but which is, through the greed of the commercial hunter, becoming a land of frigid desolation. The seals are practically gone, and the walrus are being quickly exterminated.”

The hunting of walrus, called aaveq in the Inuktitut language, has been a significant and central part of Indigenous life for more than 2,000 years. Walruses are the largest of Arctic seals and their numbers and migrations are relatively easy to predict, easier than bowhead whales. Different groups of Indigenous people had moved in and out of this region for centuries, with different traditions and hunting practices, but Western archaeologists and oral traditions show that walruses have always been part of Inuit survival in the Arctic: for food, for tools from walrus tusks, for light from walrus oil, and for rope made from walrus skin. Walruses have also been significant figures in Indigenous storytelling and in their spiritual lives, reflected in Inuit clothing, musical instruments, and artwork. 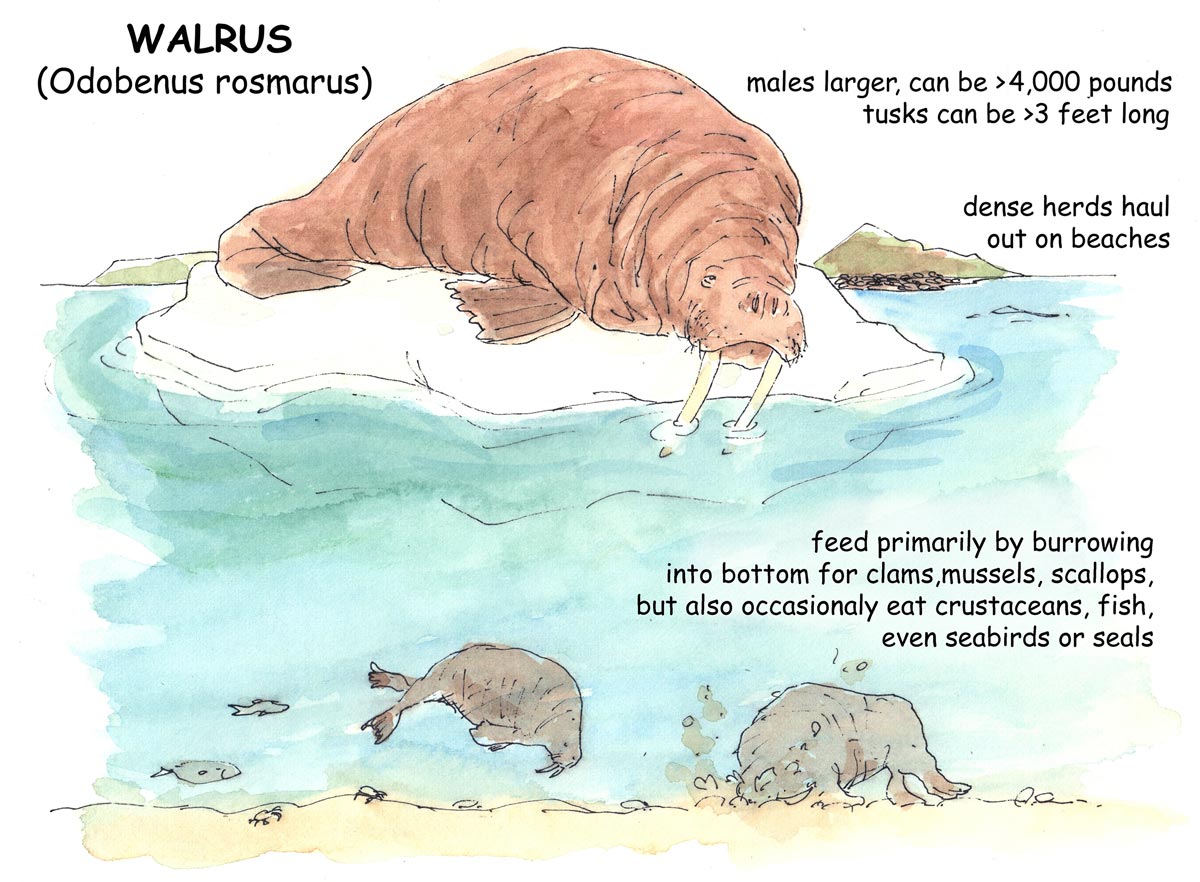 Inuit cultures might first have impacted walrus populations to some extent, but certainly not in the way that European hunting did. Beginning in the 980s CE, Norse hunters arrived on the coast of Greenland, initiating a crash of the local walrus populations. The Vikings—and later European groups—then hunted walruses throughout the Canadian Maritimes. In the 1400s and 1500s, European explorers, fishermen, and whalemen hunted walrus for ivory, meat, hides, and blubber (for oil). Healthy herds of walruses were slaughtered by the thousands in the icy regions of the Gulf of St Lawrence and even as far south as Sable Island off Nova Scotia. This commercial hunting, which increased still more with the use of firearms, continued into the early twentieth century. 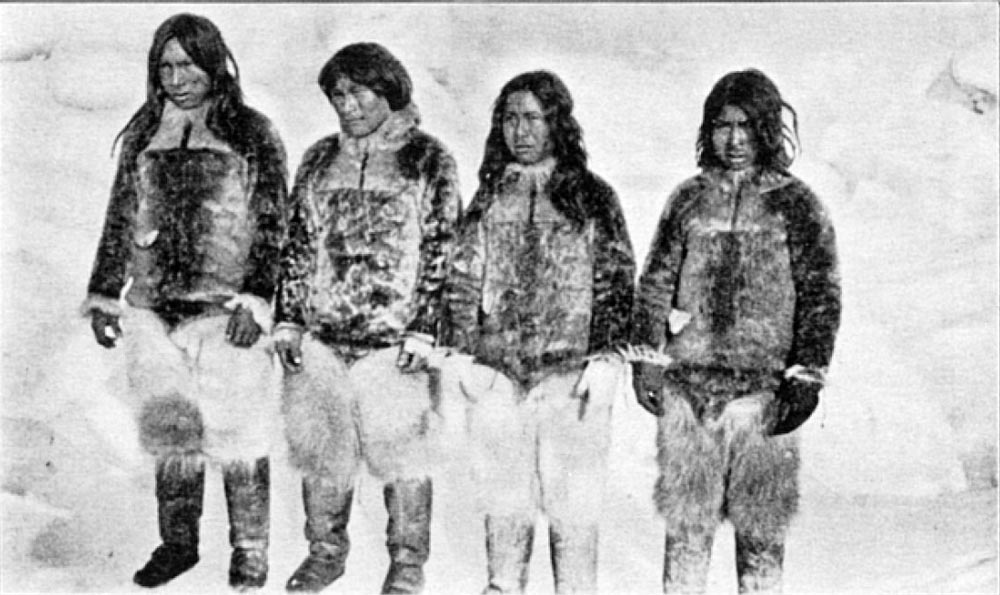 Ootah, Egingwah, Seegloo, and Ooqueah, four of the Inughuit men who helped get Peary and Henson to the North Pole in April 1909.

Matthew Henson died in 1955 after finally getting some of the honors and respect that he deserved for his expeditionary achievements as an Arctic explorer. Meanwhile, even in this time of rapid climate change in the far north and increased impact from human presence, walruses seem to be recovering, in part because of strict management. In recent decades, a series of policies have required Indigenous voices in the decisions as to how many walruses to hunt, when, and where. I think Matthew Henson would be pleased. 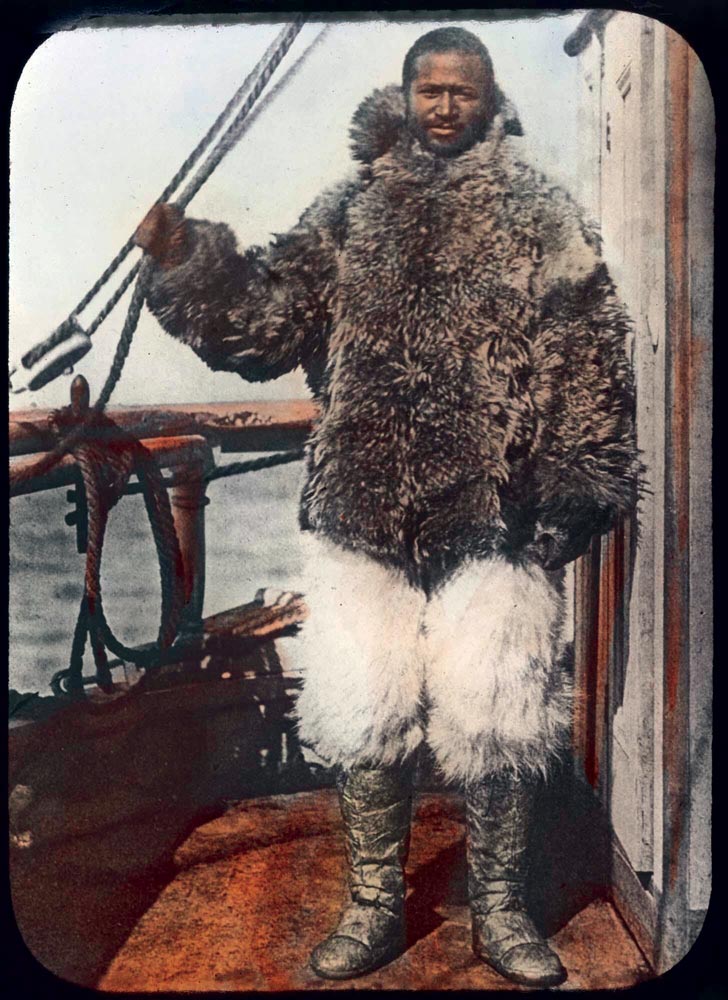 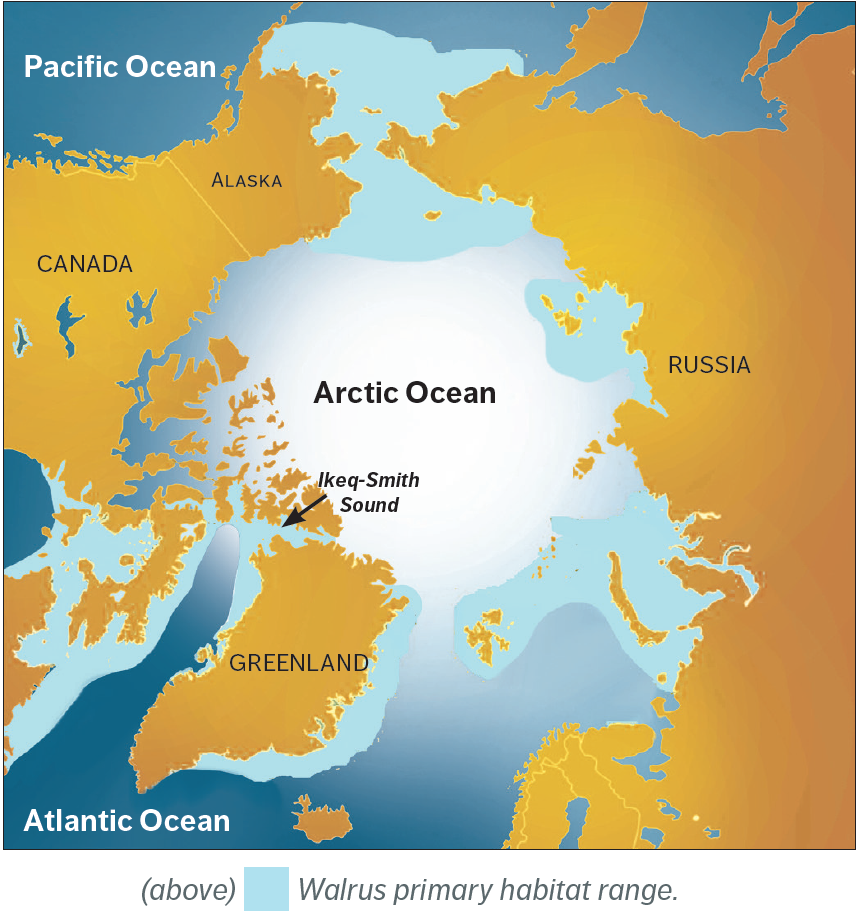