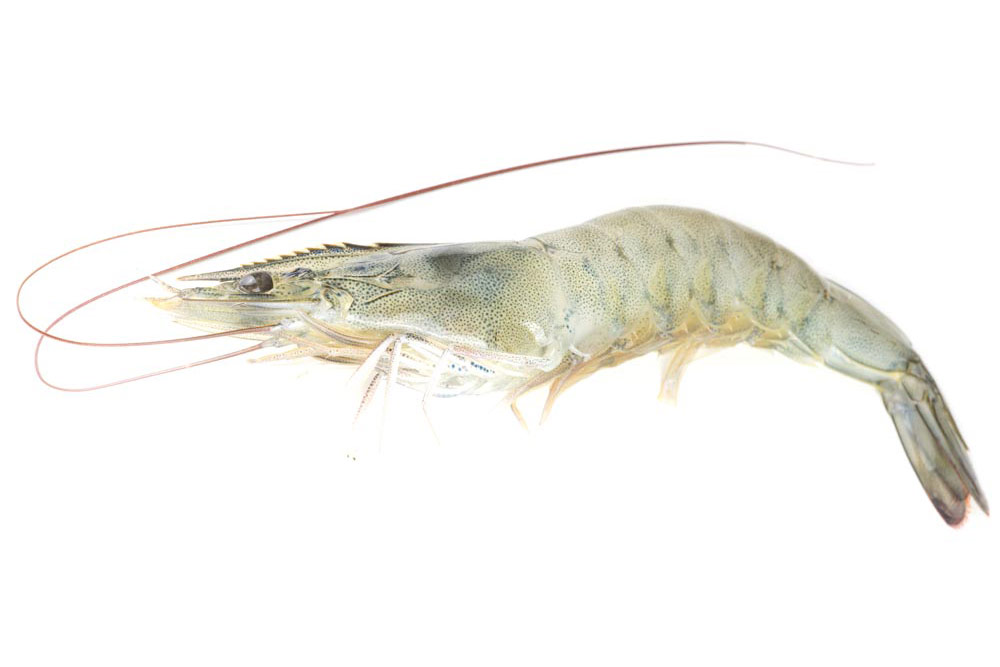 Scientific Name:
Litopenaeus setiferus
White Shrimp has five pairs of legs and five pairs of swimmerets. They grow up to nearly 8". Females are lightly larger.

Last issue, I wrote about the pelicans described by Louisiana journalist Martha Field, who wrote under the pen name of Catharine Cole for the Daily Picayune in the late 1800s. Field was exceptionally popular in her time. Her writing was elegant, detailed, and anthropological, so it now serves as a window into a variety of maritime trades and daily lives in the coastal regions of Louisiana. 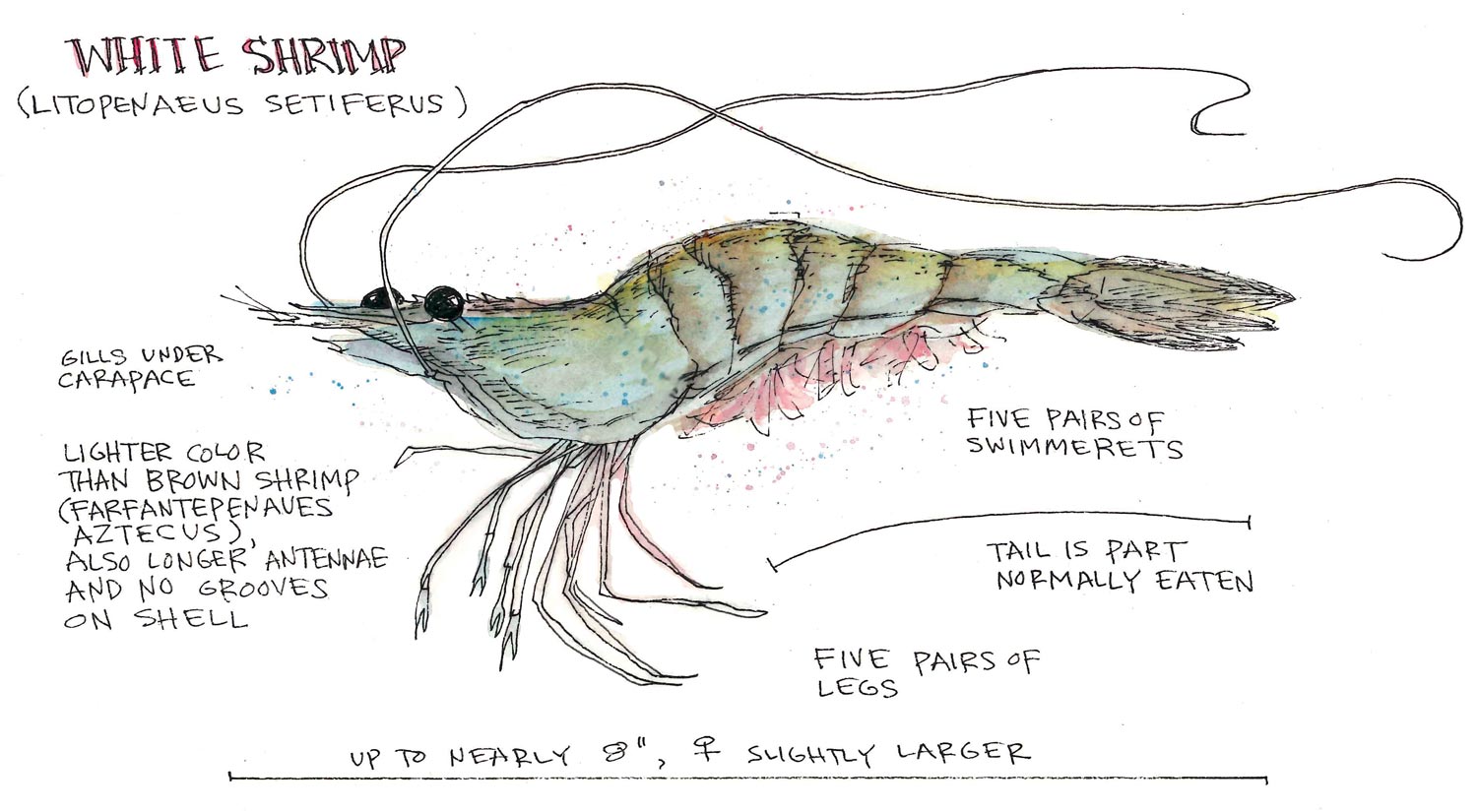 In 1888 Field chartered a little schooner, the Julia, run by a small family and crew. They toured the Gulf islands to the south of New Orleans. They fished, captured seabirds, and explored ashore.

Toward the end of the voyage, they anchored off Timbalier Island West. Today this island and Timbalier East are a quarter of the size they were in the 1880s, but even then they were thin, barely-inhabited barrier islands with few trees, mostly only “expanses of sea-marsh.”

Field wrote, “Shrimp are to be had by the barrelful just for seining, and on Timbalier and other islands equally flat and dreary the Chinese make their camps.” She explained that the catching and drying of shrimp was a “great industry” that the Chinese understood “to perfection.”

Field wrote on this Louisiana dried shrimp industry in other travel essays for the Daily Picayune. Walking around the inland town of Houma, Field described the “great pink crescents piling high” for sale. The dried shrimp was bound for shipment to China via New Orleans. Field also sailed to a larger shrimp-drying camp near Grand Isle, in Barataria Bay, which was the center of the industry and home to at least a half-dozen large camps. Here she visited with one of the women who lived in that community. Field reported Chinese and Filipino fishermen living and working together in “rush-thatched” homes and wood platforms that they had built onto pilings they’d driven by hand into the marshland and low island areas. 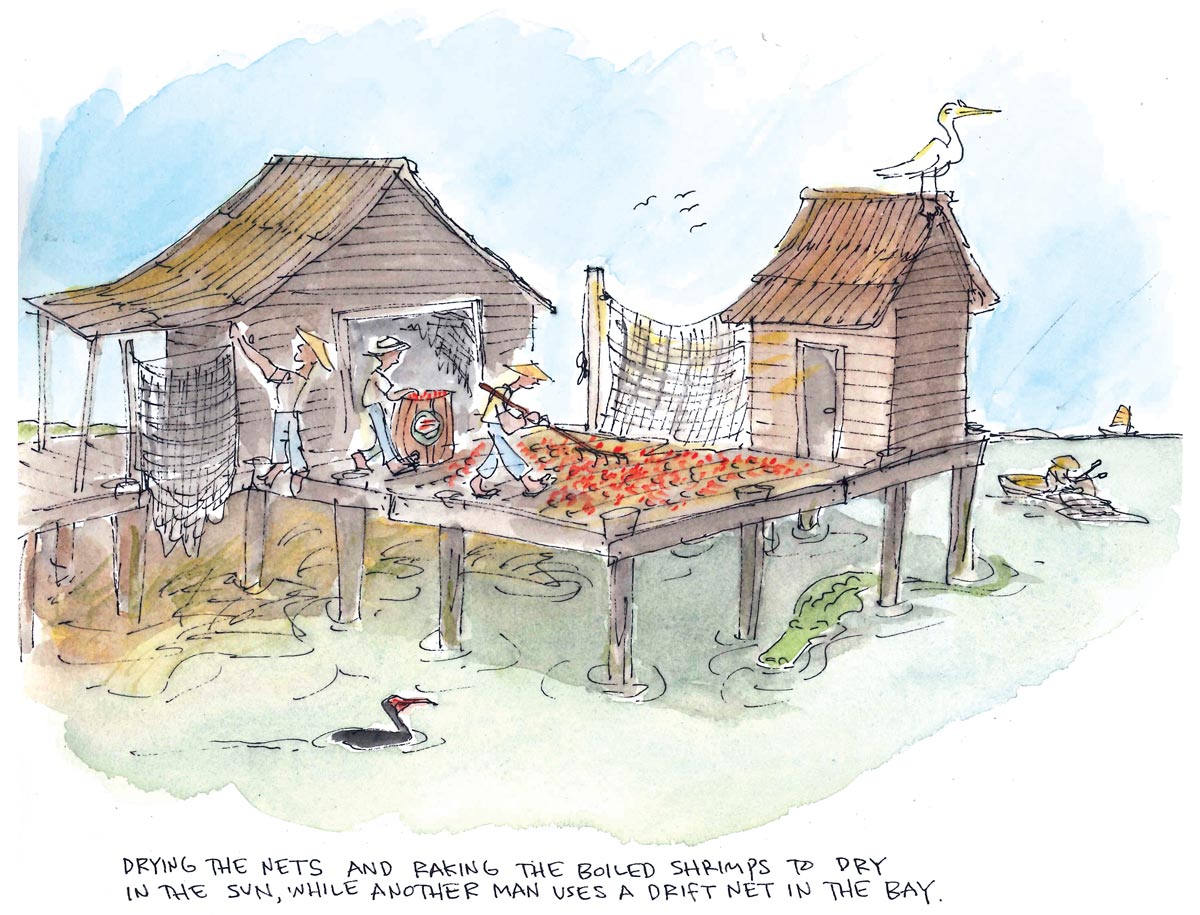 Field explained, “The method of shrimp-drying is apparently simple enough. It is said, however, the Chinese have a secret formula.” She suspected it had to do with the method of salt preservation with saltpeter (potassium nitrate). The fishermen caught the shrimp with surface nets and later bottom trawls operated under sail. The entire community then boiled the shrimp and spread them on the platforms in the sun. “When dry,” Field wrote, “they are salmon-red, and as hard as bullets. They are then raked up and put into white canvas bags. The shells are threshed off, either by walking on the bags or by beating them on a board.”

Filipino and Chinese immigrants had settled and formed communities in this region in the 1800s, bringing their skills in catching and drying shrimp from similar villages and ecosystems in Asia. Perhaps two of the most famous of these communities, comprising mostly Filipino immigrants, were known as “Manila Village” and “Saint Malo.” Neither of them exists today, because of land loss and hurricanes.

At this time the fishermen of the Louisiana Coast probably captured mostly White Shrimp (Litopenaeus setiferus), which are actually a light bluish-grey in color. White Shrimp favor more shallow, warmer, lower-salinity areas. They swim around the Louisiana islands and bayou all year, but are most common in the warmer summer months. Today, along with the similar Brown Shrimp (Farfantepenaeus aztecus) that prefer deeper waters, White Shrimp account for the majority of the shrimp caught off the coast of the Gulf of Mexico.

With the growth of refrigeration technologies, the development of coastal trawlers with engines, and the building of highways, fresh and frozen shrimp caught off the Louisiana coast became a more popular product than dried shrimp. Today, because the practice is labor-intensive and the demand is smaller, shrimp is dried by only a few fishermen, such as those of the Louisiana Dried Shrimp Company, based on Grand Isle. The father of the owner of this company learned the craft from his Chinese neighbors in an area of the island that was then known as “China Town.” They no longer dry it in the sun on vast platforms, but inside a shed with heaters. For a brief oral history of this company, go to SouthernFoodwaysAlliance.org. You can still buy little packets of dried US shrimp in local stores in Louisiana, Texas, and California, and the product is still sold to China and other overseas markets. Or you can order a packet online: it still “ships” well! 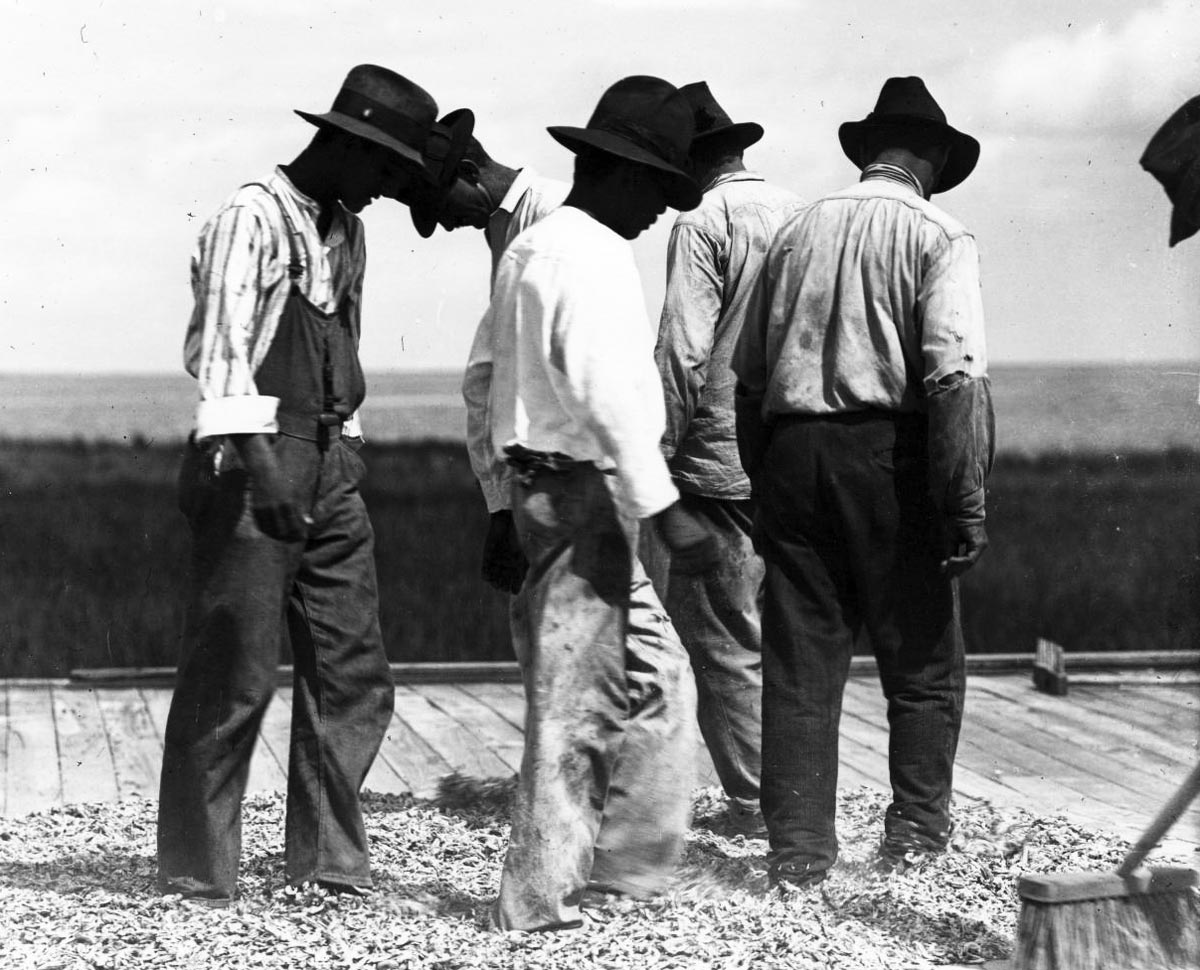 Shrimp “dancers” from one of the Filipino settlements in south Louisiana at work in the 1950s. Fresh shrimp were placed on raised platforms to dry in the sun. Walking on the sun-dried shrimp would crumble the shells and separate them from the shrimp meat. The resulting dried shrimp were then packaged and sold. Photo by Charles l. Franck, courtesy the Historic New Orleans Collection.