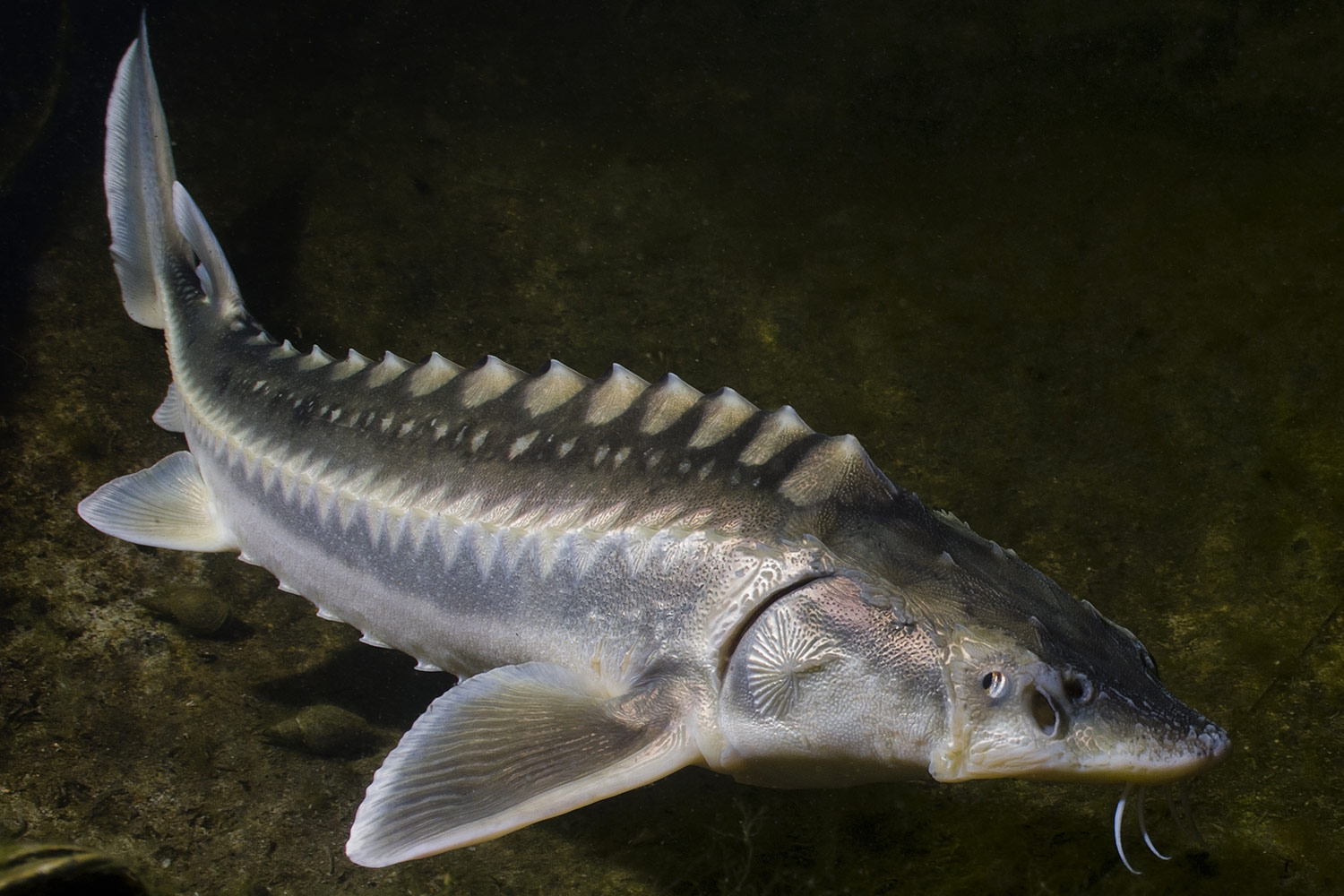 Scientific Name:
Acipenser Transmontanus
The largest freshwater fish in North America with individuals recorded at more than 14 ft. and over 1,500 lbs. 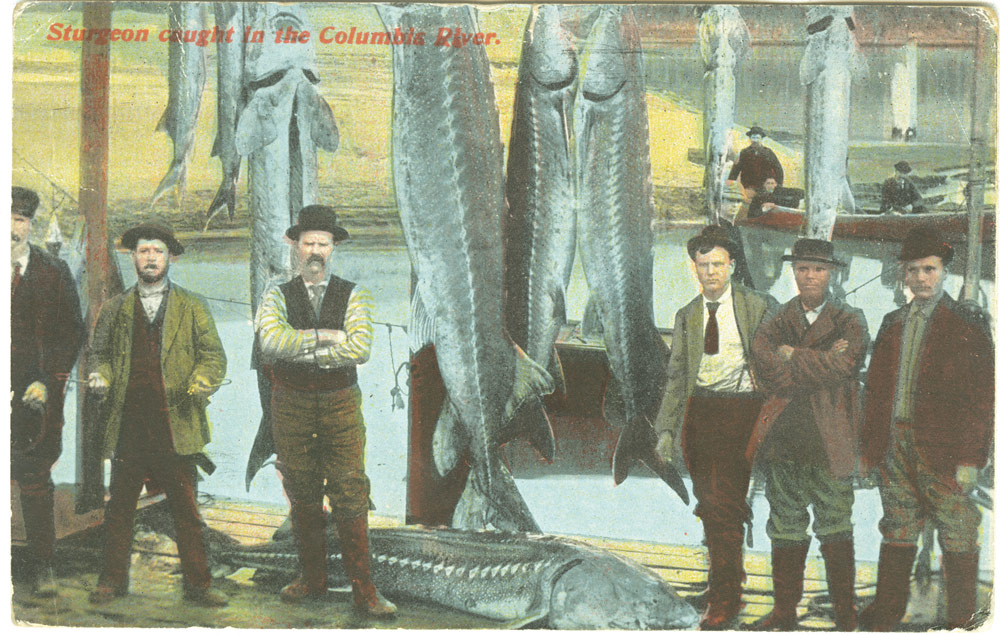 For five wet, cold, lonely years in the early 1800s, a young Irishman named Ross Cox traded for furs among the First Peoples of the Pacific Northwest. In his account of the experience, titled Adventures on the Columbia River (1832), he wrote often of eating “excellent sturgeon.” It was a favorite catch of the native people of the region.

Cox described this “royal” fish at the mouth of the Columbia: “The months of August and September furnish a plentiful supply of prime sturgeon. This fish attains a great size. Some of those we took were eleven feet in length; and, with the entrails out, weighed from three to four hundred pounds.”

Yep. And those weren’t even close to the biggest ones ever recorded. Cox was describing a species known today as the white sturgeon, the largest of about eight species of sturgeon that live throughout the rivers, lakes, and coastal waters of North America. Biologists once measured a white sturgeon caught in the Fraser River, British Columbia, to be nearly 14 feet long, weighing over 1,500 pounds! Other sources claim white sturgeon as long as twenty feet, weighing nearly a ton. Scientists believe that giant white sturgeon can live for more than 80 years. 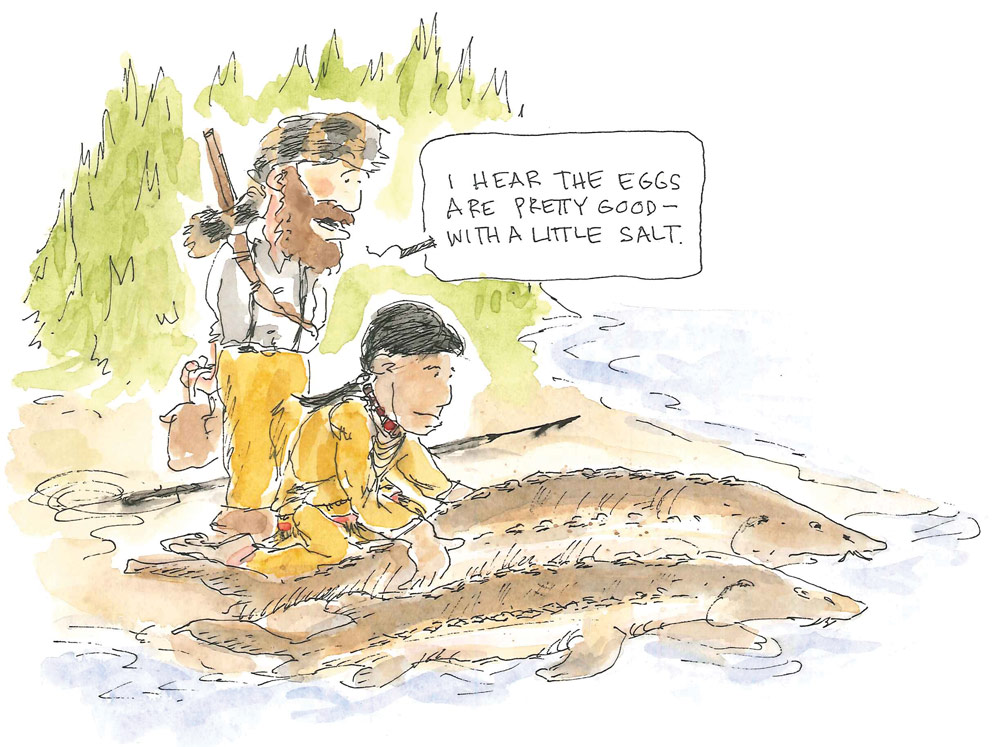 As a family, sturgeon are among the most ancient animals in today’s oceans and rivers. Ross Cox’s white sturgeon looked nearly identical to the fish that prowled river bottoms over 100 million years ago. That’s the Early Cretaceous period. With their shark-like cartilaginous skeletons, scale-less skin, and boney diamond-shaped plates, sturgeon swam around for millions of years—even before the evolution of T-Rex.

At the time of European Contact, sturgeon heavily populated waters throughout North America but, like lobster, were largely ignored by early settlers. This was perhaps because of the fish’s appearance and because Western Europeans had little familiarity with the animal, having fished out their own sturgeon generations before. Although it would not be until the mid-1800s that an American caviar industry grew, the early colonists did know about the appeal of the sturgeon’s eggs when salt-cured.

Ross Cox found the First Peoples of this region drying and smoking what sturgeon meat they couldn’t eat fresh, and the natives particularly prized the roe, too—but they pounded and roasted the eggs. The First Peoples caught smaller sturgeon with intricate fixed nets, gill nets, nooses, and even by diving and catching them by hand. They captured the giants with spears and harpoons. In 1864 one British explorer explained the method: 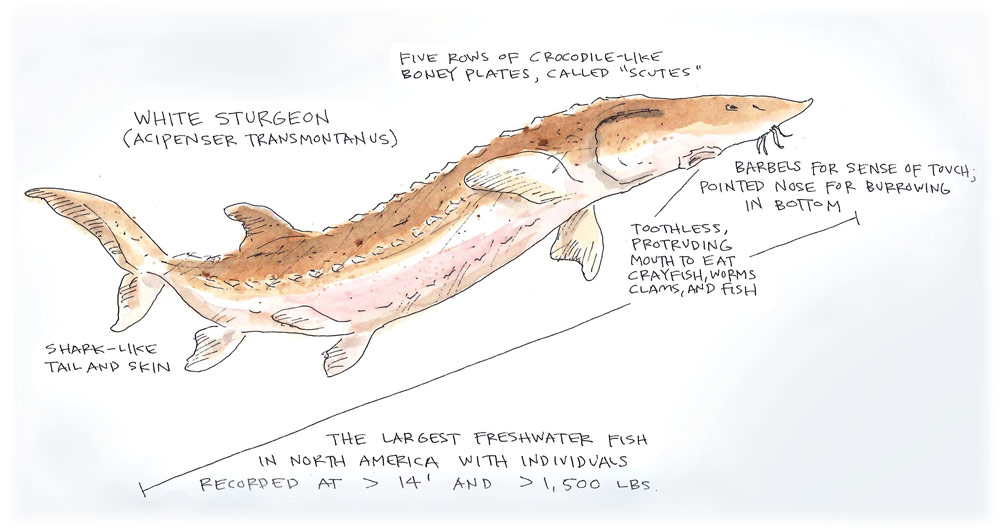 It is great fun to watch them spearing Sturgeon which here run to the enormous size of 500 & 600 lbs. The Indians drift down with the stream perhaps 30 canoes abreast with their long poles with spear attached kept within about a foot of the bottom of the River. When they feel a fish lying they raise the spear and thrust it at the fish seldom missing…you see sometimes 2 or 3 canoes being carried off at the same time down river at any pace by these huge fish. 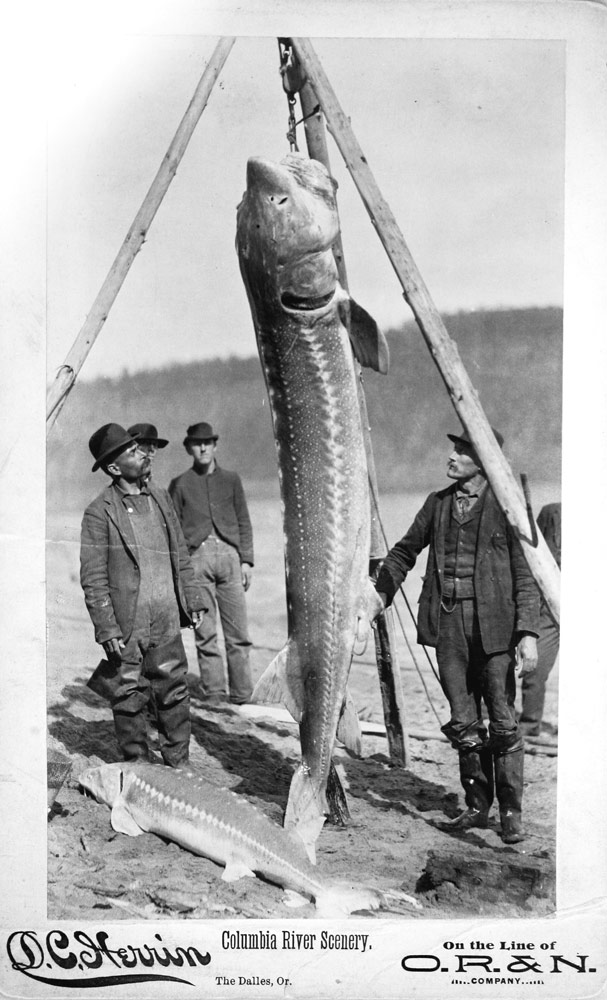 When European and American traders like Ross Cox first came to the Pacific Northwest, sturgeon were not a significant product of this region either, despite their abundance. The first commercial fisheries were for salmon. A cannery operator at the time explained
that sturgeon were monstrous trash fish that instead got in the way: “In 1879 the sturgeon were so thick in Baker Bay [at the northern mouth of the Columbia] that we did not consider it safe, early in the season, to put our gill nets out. The fish were so numerous and large that they were able to destroy a great amount of netting. For years every sturgeon taken was mutilated or killed with an ax and thrown back into the water.”

When in the 1880s businessmen brought icing technology to the Columbia, along with a demand for sturgeon, the fishermen of the region began to capture the species so aggressively that within two decades they nearly rendered white sturgeon extinct along the river. Sturgeon grow slowly and take a long time to reproduce and mature. It was easy to disturb their life cycle by disturbing their habitat and fishing out big breeding females for caviar.

Today at the mouth of the Columbia River, recreational and commercial fishermen eager to catch a huge, prehistoric fish still cast for white sturgeon, although as of 2014 they are not allowed to bring them home, regardless of size, from the mouth and lower miles of the river. The eleven-foot white sturgeon of Ross Cox’s time are pretty hard to come by, but compared to other critically endangered sturgeon species around the world, the white sturgeon is actually of less concern.