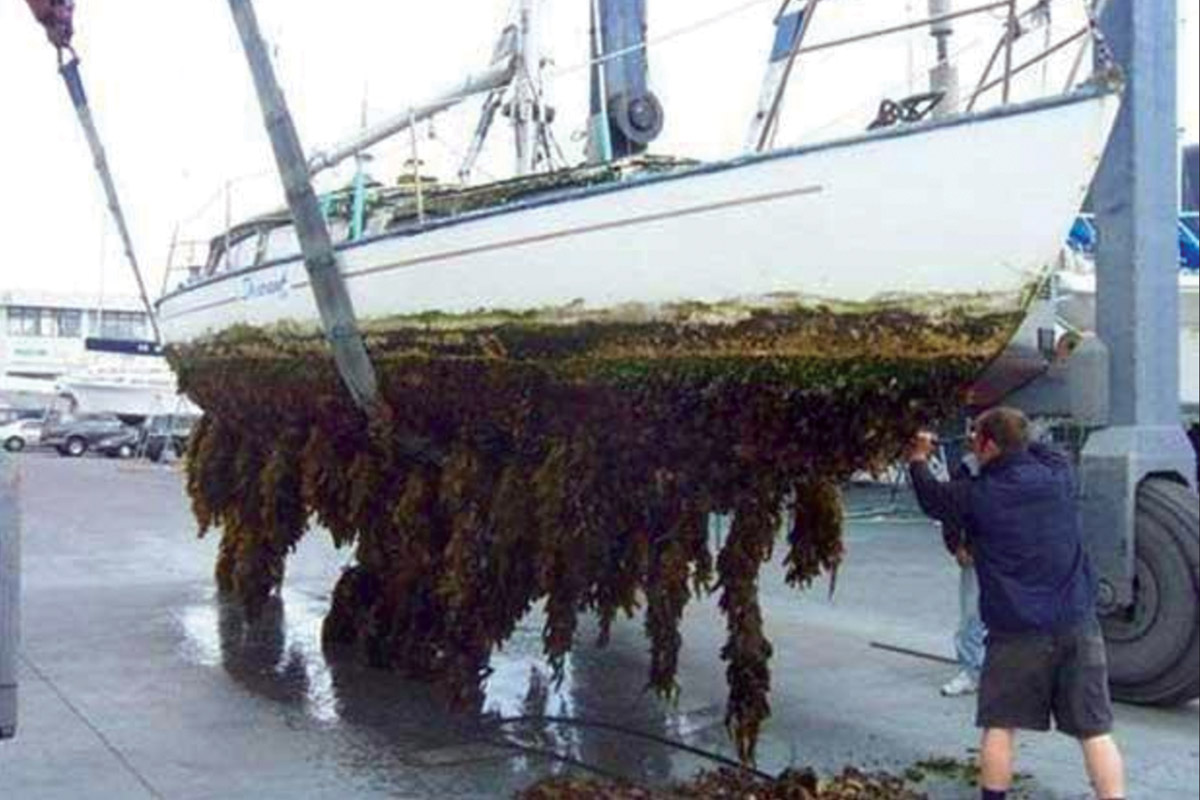 Visitors to USS Constitution in Boston this summer while the historic ship is out of the water (until 23 July—see article on pages 16–17), will first notice the bright copper plating covering the ship’s entire bottom. This was the go-to anti-fouling treatment at the end of the 18th century and well into the 19th century, as copper was discovered to be toxic to marine growth.

Ships and boats that spend most of their time in the water (as opposed to leisure boats that are usually launched by trailer for the day, and hauled back out by sunset) have to contend with tiny plants and animals attaching themselves to the hull beneath the waterline. Not only does this marine growth slow down a vessel’s speed, but organisms can penetrate the hull and damage it. For wooden vessels in seawater, some organisms—specifically the teredo worm, teredo navalis—will bore through the wood with such efficiency that the hull would soon be peppered with holes and tunnels.

To combat this situation, shipowners treat the underwater portion of their vessels’ hulls. In ancient times, boats were often slathered with tar, wax, oils, or tallow (animal fat) mixed with animal hair. Sometimes shipbuilders tacked on an additional layer of wood that could be sacrificed and replaced when it got too full of holes, thus protecting the actual hull planking. In the 17th century, mariners used sheets of lead to sheathe their hulls to deter marine growth, only to discover that lead hastened the corrosion of iron fastenings that held the ship’s planks to the frames. Coatings called anti-fouling paints that contain substances toxic to marine organisms have been around for hundreds of years, but not until the mid-1850s were formulas developed that were effective enough to be adopted on a wide scale, reducing the need for expensive copper plating. 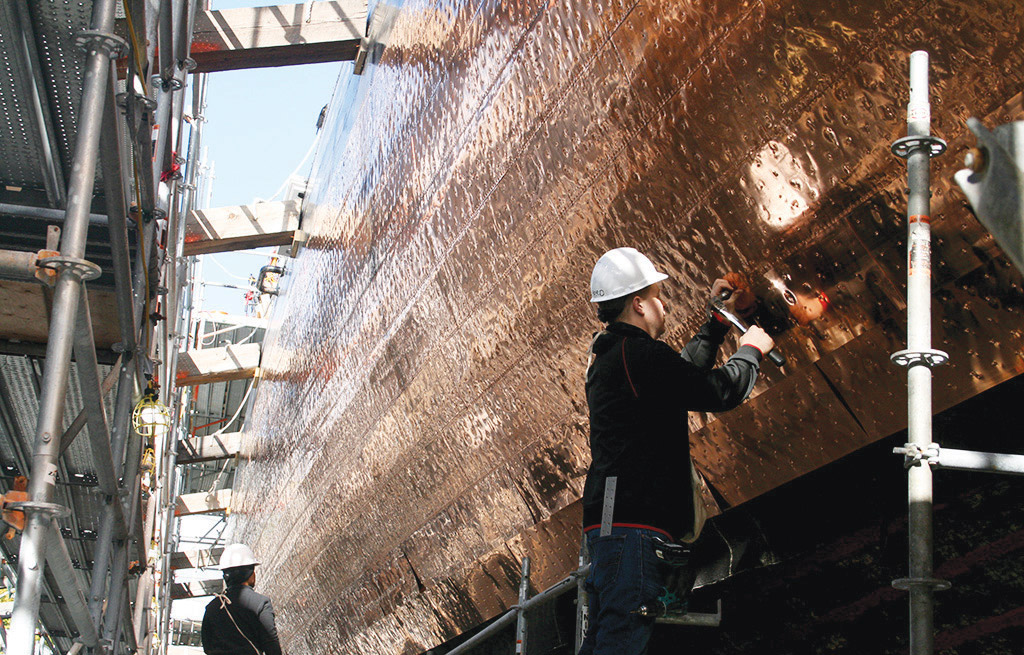 Left unchecked, marine growth could slow a vessel’s speed through the water considerably, a serious concern for fighting ships that relied on speed to catch enemy vessels or make an escape in a dicey situation. In the 1700s, the British Royal Navy had the largest fleet in the world; finding a solution to this problem would be the key to maintaining its dominance on the high seas. Naval shipyards experimented with various substances; the use of copper produced the most consistent and favorable results. In 1758, the British tested this theory by covering the bottom of the 32-gun frigate HMS Alarm with hundreds of sheets of copper plating and sending her on a voyage to the tropical waters of the Caribbean, where teredo worms and marine plants inflicted more damage on seagoing vessels than enemy warships. While the copper plating did indeed successfully prevent marine growth, it was also discovered to react with the ship’s iron fastenings, causing excessive corrosion. This was not too difficult to overcome; copper-alloyed fastenings were swapped out with iron bolts and hardware, or other materials were used as a buffer between the copper and iron used in shipbuilding.

Despite the significant added expense that coppering a ship’s hull entailed, in the 1770s, the Royal Navy mandated that ALL its ships would be sheathed in copper plating. Not only would this save money by prolonging a ship’s working life, but it meant that warships could spend longer periods at sea without the need to come into port for repairs and bottom-cleaning. The US Navy followed the British example and coppered its first warship—USS Alliance—in 1781; when it built USS Constitution and five other sister frigates to build up the size and strength of the US fleet, all were sheathed in copper plating below the waterline.

In the commercial fleet, merchant shipowners who could afford the initial cost followed the navy’s lead and had their ships copper bottomed, but this was impractical for iron-hulled ships, which became more prevalent in the 1800s, so experiments with paint were taken up again. By the 1860s, new ships were launched with painted hulls instead of copper-plated bottoms.

Anti-fouling paint ingredients—then and now—are a mix of a toxic material to kill off marine growth (traditionally copper, arsenic, or mercury); solvents (like turpentine or alcohol) that will evaporate once the paint is brushed on; and a binder to ensure the final coat has the right amount of flexibility and durability. Even fiberglass boats often are coated with anti-fouling paint. While not threatened by teredo worms, they do collect marine plants and organisms if left for any length of time in sea water.