Register Here for the Zoom Seminar

Seminars are free to attend, although we hope you will support the Series with a suggested $10 Seminar Guest donation.

You won’t want to miss this special seminar with SUNY Maritime Professor Dr. John Rocco for an overview of one of his most popular courses, Hollywood and the Sea: Maritime Culture and Film.   The seminar will explore Hollywood’s depiction of the maritime realms of war, work, law, and discovery, examining important themes and subjects raised by the films—the voyage narrative, American whaling, famous naval battles, slavery, World War II, and maritime crime and punishment.  Dr. Rocco will guide us through the history of maritime Hollywood through the work of directors such as Buster Keaton, Michael Curtiz, Alfred Hitchcock, Howard Hawks, John Ford, Elia Kazan, Edward Dmytryk, John Huston, Francis Ford Coppola, and Steven Spielberg. 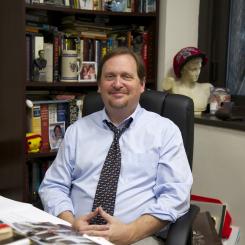 About the Speaker
In addition to being a well-loved professor of composition, literature, film, and other graduate studies, Dr. Rocco is also an author and the coordinator of the Maritime and Naval Studies (MNST) master’s program at SUNY Maritime.  He has long been involved with digitizing years of records from Sailors’ Snug Harbor and received the SUNY Chancellor’s Award for Excellence in Teaching.